Maybe it’s me, or my imagination? Even before the latest round of market weakness, most of the feedback and sentiment on my social media feed has tended to bear bearish. I saw a fair number of calls for SPX to eventually test its February lows at about 1820, but I haven’t seen a lot of forecasts for breakouts to new highs. The recent year-end projection by respected former Value Line research director Sam Eisenstadt of 2220 only represents only modest upside from current levels, but I don’t see a lot of enthusiasm for that call.

The WSJ recently call this The Most Pessimistic Bull Market in History, as investors have only embraced it in the most reluctant way:

Instead of chasing growth and profits, investors this year have bought into safety—in a big way. Only two of the 10 top-level sectors which make up the market have reached new highs this year, and they are the antithesis of exuberance: utilities and consumer staples.

This may be merely a failure of imagination. As in 2007, the bubble pushing up the market may be elsewhere. Back then, valuations weren’t outrageous, but excess in credit created unsustainable profits. This time the most obvious froth is in the government-bond markets. German 10-year bunds on Friday yielded a mere €270 a year on a €1 million investment ($1.1 million), enough to fuel your BMW 7-Series a couple of times with enough left over for a currywurst and a beer. Japan’s yields are negative for bonds maturing out to early 2031, while U.S. 10-year Treasurys on Monday closed at a new 52-week low.

Josh Brown also pointed out that stock market investors have become chicken-bulls (my term, not his), as the two most popular ETFs for equity flows have been low-volatility funds, USMV and SPLV:

The popularity of these two ETFs is perfectly emblematic of the mood these days among financial advisors and their clients. And if you know anyone in the ETF business, they’ll tell you that the principal determiners of flows are in this order: 1) recent performance 2) whether or not advisors have been sold on them and 3) recent performance. ETFs do not sell themselves and retail do-it-yourselfers are not the drivers of AUM flows – only advisors can really move the ETF needle. The iShares product probably has an edge on SPLV because it’s based on an MSCI index, which is what many advisors use as a benchmark in their performance reporting.

That’s where the “chicken-bull” part comes in:

A collective financial advisor decision was made in the aftermath of August – “Okay, we’ll stay in, but we can’t take the full volatility of the stock market anymore.”

You can only imagine the calls that were coming in – “Is this it? Here we go again!”

To which the advisors’ response was something along the lines of “Don’t worry, I have an idea…” The iShares and PowerShares wholesalers did their work well.

Seeing this fund grow to $12.5 billion, having taken in a third of that in the first four months of this year, tells you everything you need to know about current sentiment. Advisors are tacitly accepting that they must be in US stocks, but because of the angst of their clients, they’re offering them exposure through a vehicle that purports to offer “minimum” volatility.

That’s not the sort of investor behavior and psychology that happens at market tops. While a bull case where the SPX rises to 2400-2500 is my base case scenario, it is well within my range of possibilities. Until the investing public starts to get wildly enthusiastic about a 2400-2500 SPX target, it’s hard to see how this market tops out.

Let me make two cases for a 2400-2500 bull market. One is fundamental, the other is technical.

An analysis by Calamos Investments recently made the point that the stock market isn’t very overvalued. They compared the forward P/E ratio of the market and market sectors in 1992 and today. 1992 was chosen because no one could argue that the market was overvalued then, as it was just the start of the great market run that culminated in the NASDAQ Bubble.

As you read this analysis, don’t forget that interest rates were considerably higher than they are today. Arguably, today’s low rate environment deserves a higher P/E multiple. 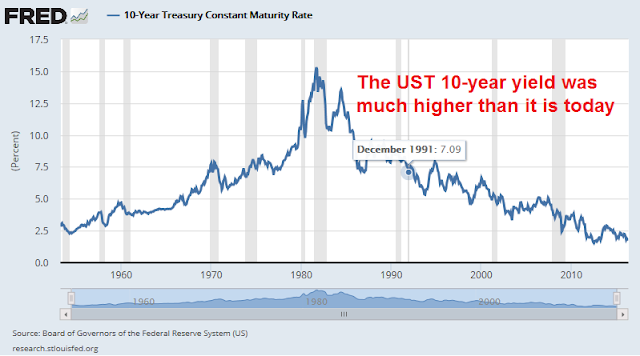 As the table below shows, the current market forward P/E multiple of 16.4 is modestly above the 1992 multiple of 14.3. An examination of the biggest differences in P/E multiples reveals that they are Energy, which is understandable because its earnings have been devastated by the oil crash, Consumer Staples and Utilities (annotations are mine).

Wait! What? Where are the excesses in this market? Staples and Utilities are defensive sectors. You mean that investors are paying up for defensive exposure (see the WSJ and Josh Brown above)?

In the past, market tops have been marked by wild bullishness about some hot sector, such as Financial, Technology, Gold, Energy and so on. Does a market led by defensive low-volatilaty leadership look like the psychology of a market top?

The other bullish signal comes from the VLT Momentum Indicator, which is a momentum signal using long-term monthly data developed by Coppock. I am indebted to Leuthold Group who alerted me to the potential setup in May. Indeed, SPX closed above 2062 in May, which triggered a VLT Momentum Indicator buy signal. 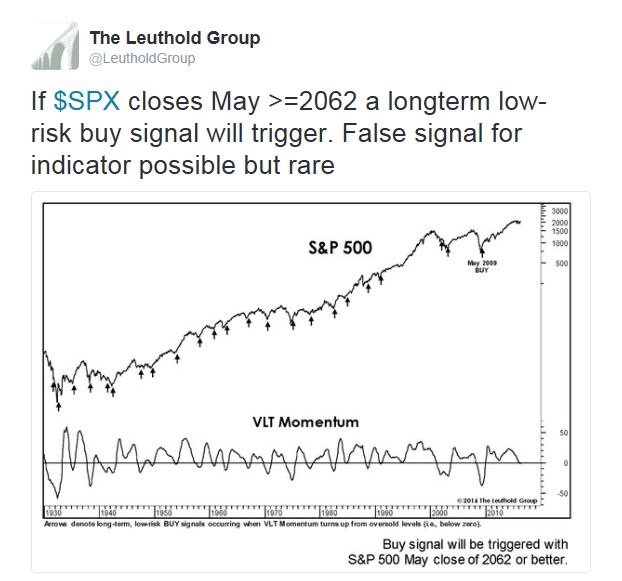 Tom McClellan also wrote about the buy signal, but based on the DJIA instead of SPX: 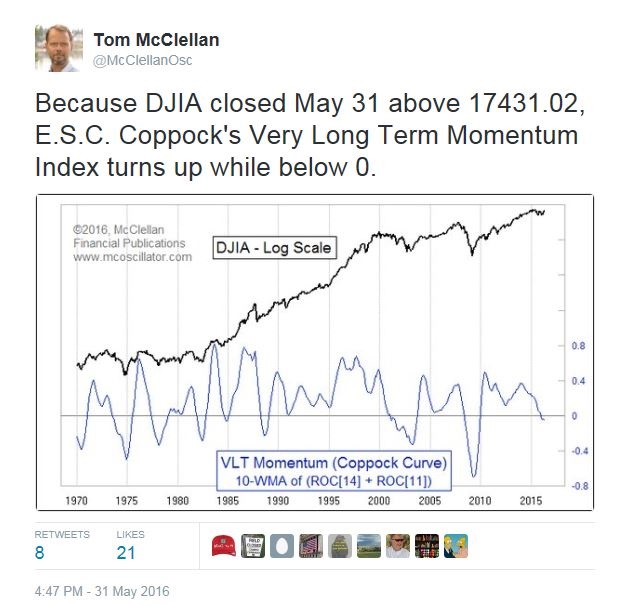 This Bloomberg story went into greater detail about the work by Leuthold Weeden Capital and outlined the past record of this buy signal. 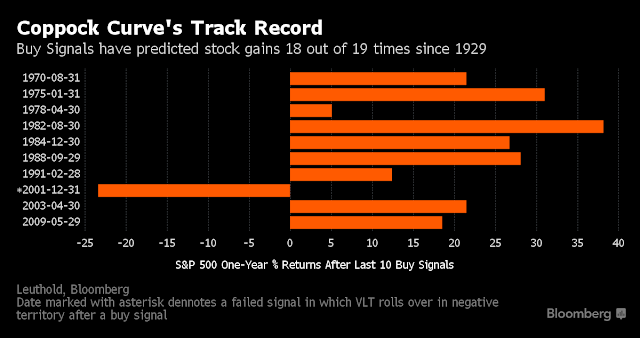 If history is any guide, a one-year SPX target of 2500 is well within reach using the median return of about 22% after past VLT Momentum Indicator buy signals. These days, a 2200 target would be considered mildly aggressive and price targets of 2500 is virtually unheard of.

In conclusion, market psychology is still overly bearish. Until I see more of the public getting more enthusiastic and piling into stocks with an eye towards 2400, 2500 or even talk about 3000, it’s hard to see how this market can make a cyclical top.