Mid-week market update: What’s going on with the VIX Index? The VIX, which measures implied option volatility and a useful measure of “fear”, spiked dramatically on Monday. While SPX did fall, the magnitude of the decline didn’t match past VIX spikes. It prompted this tweet from Ryan Detrick:

Rob Hanna at Quantifiable Edges also observed that the combination of a VIX spike of this magnitude is unmatched by the shallowness of the fall in stock prices.

As you can see from the chart below, the VIX Index spent the second day above its Bollinger Band (BB), which has marked regions of limited downside risk in the past. On the other hand, the bottom panel shows the 10-day rate of change of the VIX Index, and such events have often foreshadowed further SPX weakness (see vertical lines). 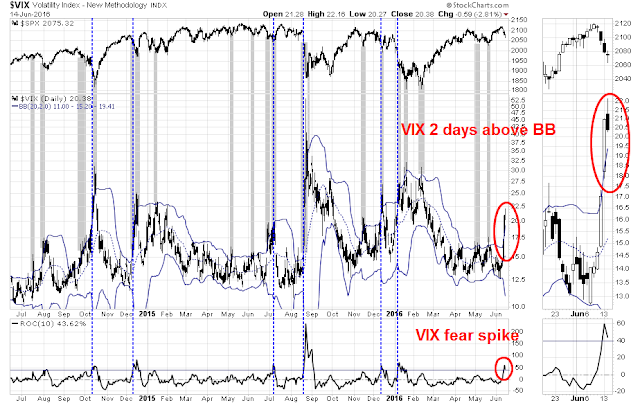 What’s going on? My analysis suggests that we are seeing the case of the VIX tail wagging the SPX dog.

These levels of fear shown by the VIX Index is unusual in many ways as the VIX spike has been unconfirmed by other metrics. The Fear and Greed Index has retreated from an overbought, or “greedy”, reading to neutral. Normally, these kinds of VIX moves have tended to correspond to oversold levels, which are not in evidence. 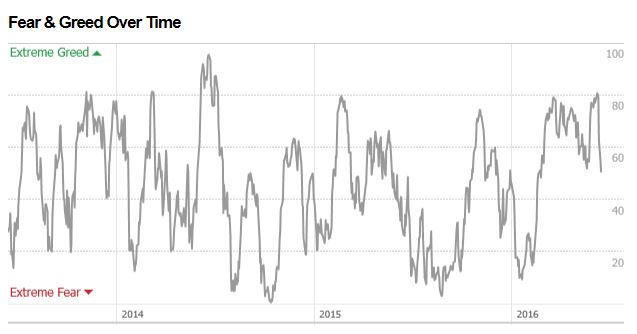 Macro Man recently suggested that Brexit referendum anxiety has spilled over from the currency option market to the more liquid VIX Index. While that explanation undoubtedly has some elements of truth, it remains unsatisfactory.

If the market is indeed trying to hedge against Brexit event risk, then we should expect that the VIX term structure to have become inverted at some point. If you are trying to hedge event risk, then you hedge the event. In that case, the demand for near-term protection (VIX) should be higher than the demand for longer term protection (3-month VIX, or VXV). As the chart below shows, while the VIX/VXV ratio has risen, it hasn’t inverted in the last few weeks nor is it anywhere near an inverted state. 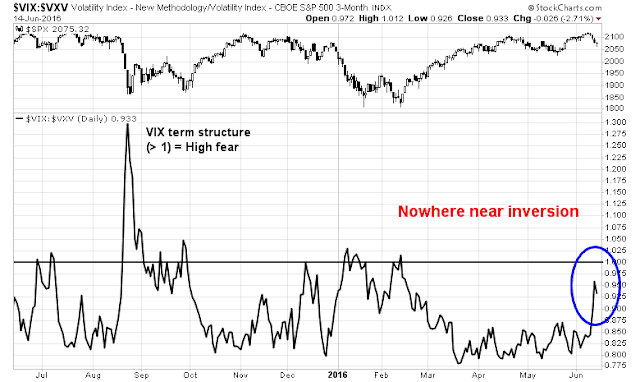 In more practical terms, how can someone trade this anomaly in the VIX?

One way of addressing this puzzle is to examine the historical precedence. An alert reader highlighted analysis from Rob Hanna at Quantifiable Edges showing what the market has done after a sharp drop from an intermediate term high. The results look bullish out to a five-day time horizon.

Separately, I went back to 1990 and looked at what happened after sharp VIX spikes. The VIX spike on Monday was 3.9 points, or 23%. The chart below depicts the median market action before and after the VIX spike, which shows that the study found sufficient number of instances to denote statistical significance. As the chart shows, the magnitude of SPX weakness one and two days before the VIX spike was nearly half of past episodes. Depending on how we defined the VIX spike, either by the absolute point rise or in percentage terms, the market tended to rally after the spike and then fall back. This suggests a scenario of a rally, followed by a decline to test either the previous lows or find some support level before rising again. 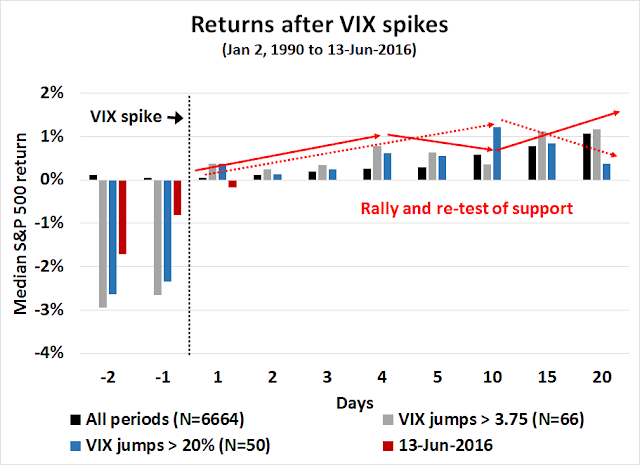 If history is any guide, then expect some market supportive noises out of the FOMC tomorrow, especially during the post-meeting press conference. The market would then rally into Friday and then fall into the Brexit referendum next week.

That’s when event risk comes into play. If the UK votes to stay in the EU, then the bears can expect a rip-your-face-off relief rally. If, on the other hand, the Leave forces prevail, then the bottom could be much lower than anyone expects.

For now, my inner is inclined to step aside in light of the FOMC wildcard, but if events unfold as planned, then he plans on entering a modest short SPX position near the close on Friday in anticipation of further angst about the Brexit vote. Anyone who plans on trading this event will need the discipline to pre-define his risk and pain threshold. And he have to be prepared to be nimble.

8 thoughts on “The VIX tail wagging the SPX dog”