Dear Morgan Stanley, here is the bull case – Humble Student of the Markets 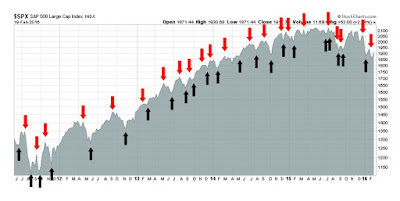 Here is the bull case

Last week, Morgan Stanley strategist Adam Parker admitted defeat. He conceded that “our portfolio advice has been pretty horrendous lately. As my 90-year old Latin teacher used to tell the class in 1985, `son, you are in left field, without a glove, with the sun in your eyes.`” (via Zero Hedge). Beaten and battered, he concluded that the only bull case for stocks was there was no bull case:

What’s the bull case? The positives are this: no one is articulating a bull case for US equities with conviction. Earnings expectations are potentially low. There is some fiscal stimulus this year (vs. drag previous years). The Presidential candidates don’t appear to be multiple expanders now, but they will get more centrist and the riffraff will be removed in a few more weeks. Sentiment is low (two weeks ago an investor on a panel we moderated said “It is a multi-variable world and every variable is negative”.) The US probably looks relatively better than other parts of the world. So maybe, the bull case is just that no one can articulate a bull case.

If Parker had read my commentary last weekend, he would have understood the bull case (see Profit by thinking like Big Money). To put it very simply, the bull case for stocks can be summarized in two words: “Growth surprise”.

In a way, Adam Parker was correct in the sense of everything is so bearish it’s bullish. Sentiment readings have been deteriorating to a crowded short position, which is contrarian bullish.

The latest BoAML Fund Manager Survey, whose sample consists mainly of global institutional managers, show that they are thrown in the towel on the macro outlook. As the chart below shows, growth expectations have tanked… 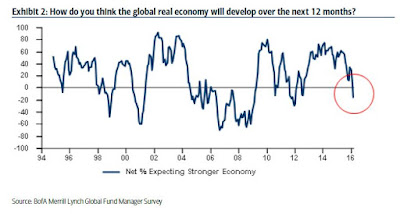 As a consequence, cash positions have spiked to an extreme high… 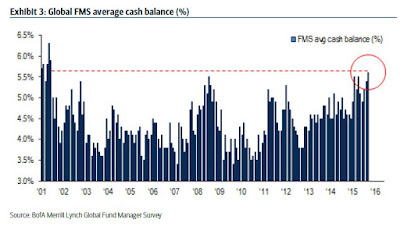 …and portfolio positioning has become highly defensive with a concentration in cash and severe underweight in cyclical stocks (annotations in red are mine). 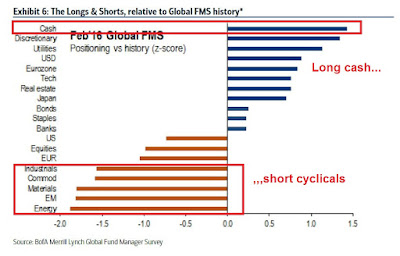 Not only are institutions bearish, so are retail investors. Individual market timers, as measured by Rydex traders, have also moved to a crowded short. If history is any guide, similar readings have put a floor on the market in the past. 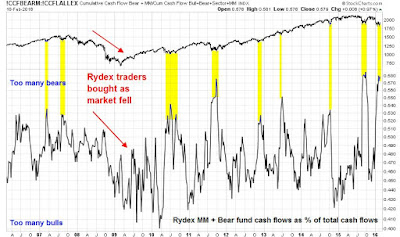 The good news is that, with sentiment and market positioning so bearishly stretched, we are starting to see elements of a positive growth surprise. I wrote before that consensus forward EPS estimate revision is the most important metric to watch during the current period of uncertainty (see If I had to watch just ONE THING), If it does turn up, it would be an indication of a revival of fundamental and macro momentum, which has the potential to propel stock prices to new highs.

The latest report from John Butters of Factset shows that forward EPS had ticked up last week after several weeks of decline. Could this be the long awaited turnaround? A single week rise could be a blip, but if forward EPS estimates were to improve again next week, my inner investor is ready to take that as a confirmation that the correction is over and sound the all-clear signal. 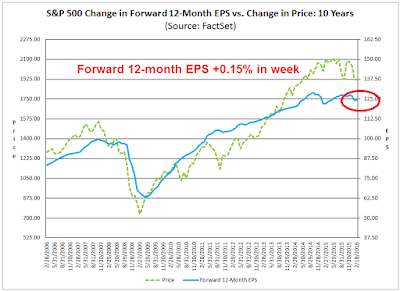 To be sure, the bond market isn`t quite ready to jump on the growth surprise bandwagon just yet. The gap between the 10 year Treasury and the 2 year Treasury yields continues to narrow, indicating a flattening yield curve and expectations of decelerating growth.

However, the Citi Economic Surprise Index (ESI), which measures whether high frequency economic releases are beating or missing expectations, is showing signs of a bottom and turnaround. The ESI (gold line) has been positively correlated with the 10-year Treasury yield (blue line). A rising ESI could push up 10-year yields, which would likely steepen the yield curve. 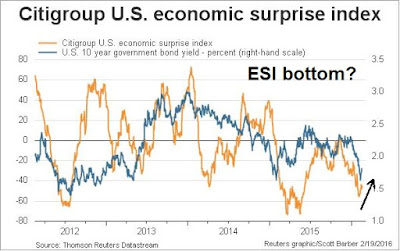 The relative performance of cyclically sensitive equity sectors and industries are also signaling a possible growth surprise. The chart below shows the relative returns of different cyclical sectors and groups. Industrial stocks have been the strongest and they staged a rally and upside relative breakout; Semiconductors having bottomed on a relative basis and now consolidating sideways; Metals and Mining have broken out or a relative downtrend; and Energy is the only sector that is in a relative downtrend, though it does seem to be bottoming. 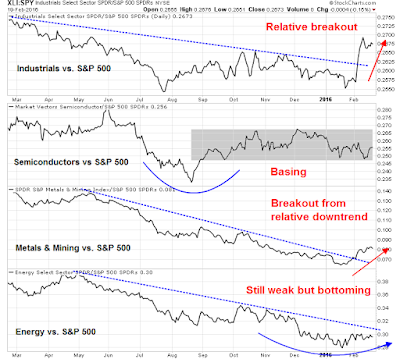 My inner investor is getting very excited. He has been accumulating stocks with overweight positions in the resource sectors. He is ready to go all-in should he get confirmation of a cyclical upturn should forward EPS revisions continue to improve next week.

The week ahead: Unfinished downside business?

My inner trader is cognizant of the positive news from forward EPS and he was tempted to close out his small SPX short position on Friday (see Why I tactically shorted stocks today). In the end, his analysis of the technical picture led him to believes that the market may still have some unfinished business to the downside before the current corrective episode ends.

From a technical standpoint, the short-term outlook for stocks still looks iffy. The 5-day RSI indicator flashed a sell signal by moving above 70, an overbought reading, and then falling below. The chart below shows the instances in the past year when the same sell signal was triggered. The red vertical lines marked instances when the market fell right away and the blue lines marked instances when they did not. There were far more red lines than blue lines and even the blue lines were followed shortly by market declines. I am also concerned about the two downside gaps depicted in the chart below, which are just asking to get filled in the next few days. 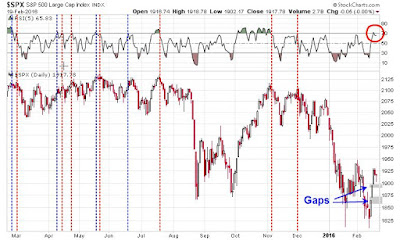 Further, breadth indicators like this one from IndexIndicators shows that the market is overbought, which will make it difficult for equities to advance next week. 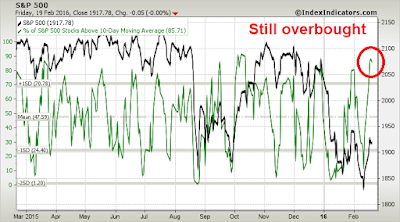 In addition, Nautilus Research pointed out that the kind of strong rallies off a bottom that we saw last week tends to be typical of a bear market rally and prone to further weakness. 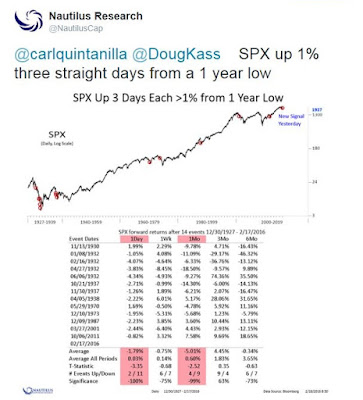 The only short-term hope that the bulls have is the market could flash another rare Zweig Breadth Thrust buy signal (ZBT) which has had an uncanny bullish record (for full details see Bingo! We have a buy signal!). The chart below shows the ZBT signal in the top panel, the ZBT Indicator and real-time estimate of the ZBT Indicator in the bottom two panels. The ZBT Indicator has 10 trading days to move from 0.40 to 0.615 to trigger a buy signal. The clock is ticking and time is quickly running out. (Interested readers can follow the progress of the ZBT signal by using this link.) 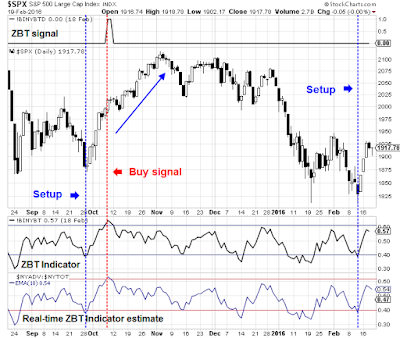 Based on the combination of my macro, fundamental and technical analysis, a more likely scenario would see SPX weaken again to test the lows again before a sustainable advance begins. My inner trader is short the SPX, but he is using the ZBT Indicator as his stop loss. Should we get a ZBT buy signal, he will cover his short and go long. Otherwise, he will wait for oversold conditions before taking profit on his short position.

9 thoughts on “Dear Morgan Stanley, here is the bull case”