During periods of market turmoil like the one we are experiencing, it’s important to keep your eye on the ball and not to get overly distracted. If I had to just had to watch just one thing, it would be how forward 12-month EPS are evolving. That’s because Ed Yardeni found that forward EPS is highly correlated with coincidental economic indicators. In that context, the current market weakness makes sense because what`s really bothering the market is a lack of growth. If the growth outlook were to improve, stock prices would stabilize and start rising again.

The chart below shows the latest update from John Butters of Factset. Consensus forward EPS still looks a bit wobbly, but its weakness is nothing like the 2008 bear market (annotations in red are mine). 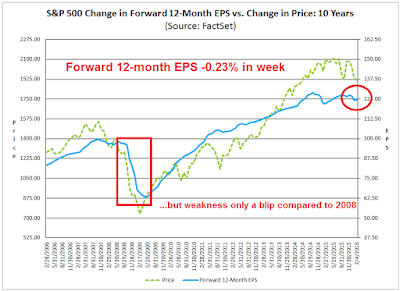 Before you write me about how annual or quarterly EPS estimates are falling as a way of bolstering the bear case, this analysis from Ed Yardeni shows that EPS estimates for any single fiscal year tend to start high and decline over time. The way to normalize the falling estimate effect is to calculate a continuous forward 12-month EPS, which is far more stable. 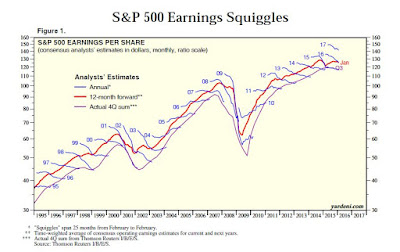 If you don`t have access to a database with consensus EPS estimates to calculate an aggregate forward 12-month EPS, you can get it from Factset. Unfortunately, Factset only updates their estimates weekly on Fridays. If you are impatient, there are a number of ways of monitoring how growth expectations are changing in real-time.

The yield curve as growth proxy

One simple way is to monitor the changes in the shape of the yield curve. One of the explanations for differing interest rate levels is the expectations hypothesis (via Wikipedia):

This hypothesis assumes that the various maturities are perfect substitutes and suggests that the shape of the yield curve depends on market participants’ expectations of future interest rates. It assumes that market forces will cause the interest rates on various terms of bonds to be such that the expected final value of a sequence of short-term investments will equal the known final value of a single long-term investment.

where ist and ilt are the expected short-term and actual long-term interest rates.

Since the Fed and other global central banks have pushed short rates down to zero, or near zero, we use the difference between the 10-year and 2-year US Treasury yields as to measure the shape of the yield curve. As the chart below shows, the yield curve has been flattening since last summer.

Bank stocks as a growth proxy

Another indirect way of monitoring market growth expectations is to watch the performance of bank stocks. There has been much anxiety about the dismal performance of the financial sector, both in the US and Europe. As I write these words, Bank of America (BAC) is trading at a price/book ratio of 0.5, Citigroup (C) at 0.5, Morgan Stanley (MS) at 0.7 and Goldman Sachs (GS) at 0.8. But did anyone notice how the market relative returns of the financial sector are correlated to the shape of the yield curve? In effect, the financials benefit from a steeper curve, where they can borrow short and lend long. A flat curve hurts profitability of this sector.

In Europe, there has been much hang wringing over the dire performance of Deutsche Bank (for some perspective see this Bloomberg article). Moreover, concerns are rising over the growing risk levels in the European banking sector.

Here is a puzzle for you: The chart below depicts the relative performance of European financials (black line, top panel), the Bund 10-year yield as a measure of financial anxiety (green line, top panel) and the EURUSD exchange rate. Sure, European financials have tanked on a relative basis in line with falling Bund yields, but if the eurozone banking system is in such distress, why is the euro so strong? Shouldn’t investors be buying the USD as the safety trade? 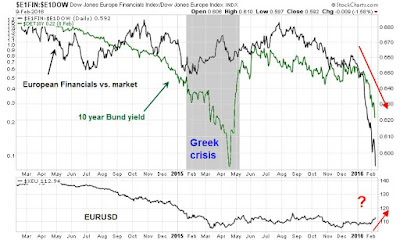 A far more simple explanation of European financial underperformance would be a combination of a flatter yield curve and the ECB`s policy of negative interest rates charged on excess reserves, both of which hurt banking profitability. In short, the banks are tanking because growth expectations are tanking. If the growth outlook were to improve, so should European bank stocks.

Bottom line: Watch for signs of growth. My preferable and most direct measure is the Street consensus forward EPS. Other real-time metrics include the shape of the yield curve and the relative performance of the financial sector. If and when those indicators stabilize or turn up, the ensuing rally is going to rip the face off the shorts.

15 thoughts on “If I had to watch just ONE THING…”