Bracing for more pain – Humble Student of the Markets

In theory, stock prices should be poised to rally. The SPX is testing a key support zone dating back to October 2014 and it is experiencing positive divergences on the 5 and 14 day RSI. If it did bottom here, the initial target would be the first Fibonacci retracement level at about 1935, with further resistance at about 1975 and 2010. 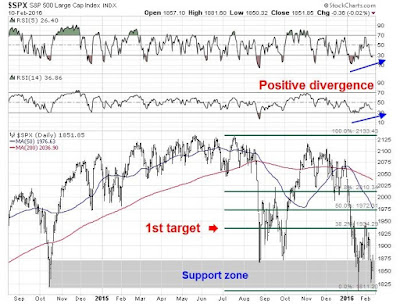 The bulls are set up for some short-term disappointment. I wrote on Sunday that I expected further stock market weakness ahead for this week because momentum was weak and readings were not oversold (see Waiting for the market to heal). Monday’s market action did not disappoint that forecast.

The omens were positive for for a bullish reversal on Wednesday. Overnight, the shares of Deutsche Bank soared on a rumor of a buyback of its senior debt as a demonstration of its balance sheet strength and European bourses rallied in sympathy. At one point, ES futures were up over 1% in the overnight market. By the time the dust settled at Wednesday’s close, the SPX was flat on the day.

For now, the bears remain in control of the tape. From a technical viewpoint, two factors are ailing stocks on a short-term (1-5 day) time frame. First, the market is insufficiently oversold for a durable bottom. The chart below from IndexIndicators shows that breadth is oversold, but readings are not at levels seen at previous bottoms (red dot is my estimate of Wednesday’s close). 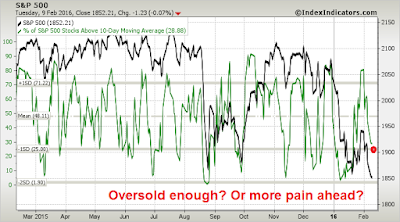 My observation is confirmed by this tweet from Trade Followers, whose specialty is to monitor the breadth of Twitter sentiment: 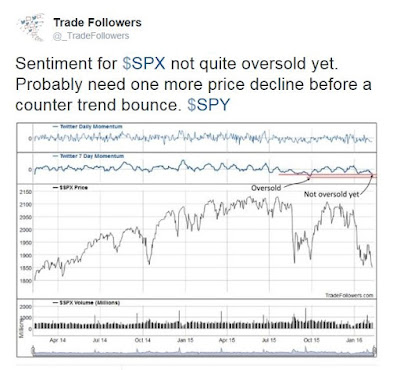 In addition, we have not seen the kind of panicky capitulation wash-out that are the characteristic of V-shaped market bottoms. The readings my Trifecta Bottom Model, which has had an uncanny ability to spot bottoms in the last three years (full description here), is disturbing. The Trifecta Model consists of the following three components:

The chart below shows the Trifecta Model readings today. The term structure of VIX inverted briefly on Monday, which indicates rising panic among option traders. However, the medium term OBOS model is nowhere near an oversold reading. More importantly, TRIN is showing zero evidence of price insensitive selling, where traders get taps on the shoulder from their risk managers to reduce position sizes and individual investors are forced to sell by margin clerks. 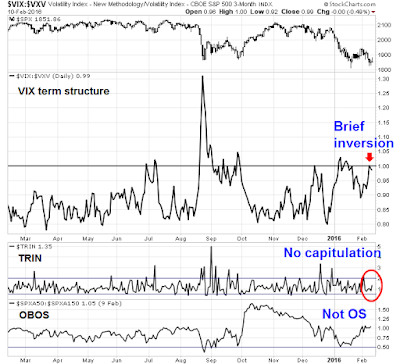 Maybe we will get the flush or maybe we won’t. Maybe we get a flush, consolidation, then more flushing. Who knows? There is no formula for markets like this, which is what makes it so fascinating to watch. In the short term, fundamentals mean literally nothing and lines in the sand are drawn and erased daily. Psychology takes over and selling begets more selling until….”and then just like that, somebody turned off the rain and the sun came out.”

Bottom line: The bulls tried to push prices up today and failed. The bears remain in control of the tape. My inner trader is staying in an all-cash portfolio and bracing for more market pain ahead.

10 thoughts on “Bracing for more pain”