Dana Lyons recently wrote a terrific piece about the level of complacency in the current bout of stock market weakness. The SPX had fallen over 9% in two weeks, but the VIX Index was barely challenging its December highs and it was nowhere near the highs set during the August/September selloff. 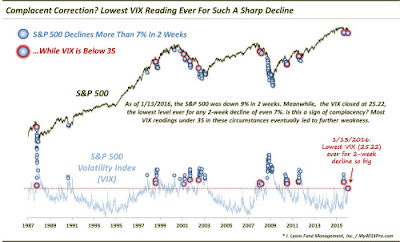 He found that past instances of where the market fell a lot but the VIX did not respond in a corresponding fashion foreshadowed further stock market weakness.

Where is the wash-out?

I had also been concerned about the apparent lack of panic during the latest market slide. My Trifecta Bottom Model, which was first described here, uses three somewhat uncorrelated components to spot short-term market bottoms:

The Trifecta Bottom Model has been uncanny in spotting bottoms in the last three years. The chart below shows the record of this model in the last year, where the blue vertical lines indicate that two of the three components have been triggered (Exacta signal) and the red line indicates that all three were triggered. All marked short-term bottoms. The latest bout of stock market weakness saw TRIN hit a high of 1.97 (not quite 2.0) and the OBOS reach a low of 0.52 (not quite 0.5). Are these readings close enough to trigger a buy signal? 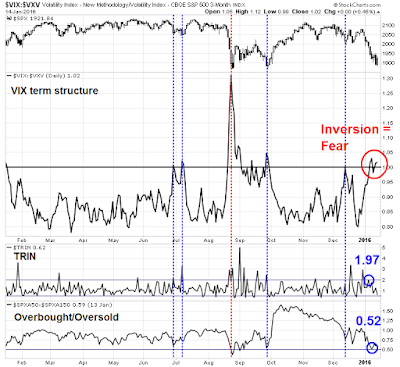 The answer is a qualified yes.
Nevertheless, I am highly concerned that TRIN never moved above 2.0. To explain the math in a simple way, TRIN is calculated by dividing the advance/decline volume by the advance/decline ratio. Imagine a day where declining stocks outnumbered advancing stocks by 2 to 1 and declining volume outnumbered advancing volume by 2 to 1. In that case, TRIN would be 1. Now imagine a case where the advance-decline stock ratio was the same, but the declining volume to advancing volume was 4 to 1, which results in a TRIN of 2. This would mean that there was much more down volume than up volume than what would be normally expected – a sign of capitulation, or wash-out
Past market bottoms have seen this kind of wash-out, which is typified by price insensitive selling by margin clerks and risk managers. We have barely seen this kind of behavior during the current sell-off, which is somewhat disturbing. 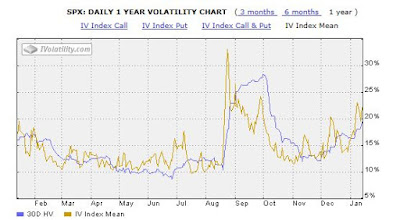 More importantly, historical volatility is a key input into the Value-at-Risk, or VaR, models used by risk managers. Imagine that you are a risk manager, or the manager in charge of a trading desk. You use metrics like VaR as a tool to properly size the capital commitment of your trading book. Since volatility, or vol, is a key input, too much noise in vol will cause your book to expand and shrink at a rapid pace. What you need is a relatively stable vol estimate.
The chart below shows the evolution of rolling realized historical one-month and one-year volatility. As you can see, monthly realized vol is far too noisy to be useful as an input into a VaR model, but the one-year vol is relatively stable. As I understand it, most desks uses one-year rolling vol the input to their baseline VaR risk estimates. 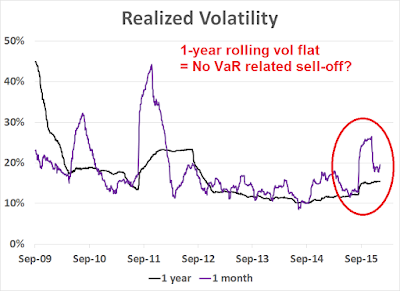 You will also notice that the one-year rolling vol spiked during the August selloff and then flattened out. This means that Value-at-Risk estimates did not change very much during the latest stock slide. Hence, there was no need for risk managers to order traders to reduce their position sizes, which would have triggered a price insensitive selloff that drives TRIN above 2.
In effect, the hedge funds and trading desks were not forced to sell by their risk control discipline. I know that I’ll get lots of comments from the last sentence, but don’t forget that most trading desks are hedged in some fashion with long and short positions. Higher VaR estimates (from higher realized vol estimates) would require them to shrink both sides of their book.
To make a long story short, flat historical vol estimates meant that trading desks did not have to sell. Therefore there was no price insensitive capitulative selling.
What does this mean near-term for stock prices? I am not sure. Readings from the Trifecta Bottom Model got close enough to trigger a buy signal, so I am giving the bull case the benefit of the doubt. However, I would not characterize this signal as unabashedly bullish and I will be carefully watching the quality and breadth of the advance, should it continue.