Buy! Blood is the streets! – Humble Student of the Markets

How worried should you be?

Well, the stock market certain took a fright last week! At this point, we have to ask ourselves the question of how worried should we be about the market outlook.

In this week`s review, I will cover the following topics, starting from long term framework to a shorter one:

How worried should you be, tail-risk edition

To evaluate tail-risk, I start with the following two questions. First, is there an immediate risk of the permanent loss of capital? Have German panzers broken through French lines and are they on their way to Paris, as they did in 1940? Have Soviet paratroopers seized key bridges across the Rhine and the Soviet 3rd Shock Army poured through the Fulda Gap and joined up with them?
Ummm, no. In those cases, the value of your portfolio would be the least of your worries.

What about recession risk? Is the US, or the world, on the verge of a recession? Recessions have always been stock market killers and fears have been rising. Jeff Miller put a lot of these recession calls by these so-called experts into context:

In other words, none of the analysts with disciplined, robust frameworks and track records are calling for recession. There have been a lot of people talking their own books (economic bears = bull bulls) trumpeting overblown calls of imminent slowdowns.

I have a Recession Watch page, whose indicators are showing low recession risk. It mainly uses the framework favored by New Deal democrat of using the indicators used by Geoffrey Moore to forecast recessions about a year in advance. I have been impressed by how New Deal democrat separates high frequency releases into coincidental, short leading and long leading indicators, which are the key metrics to watch. Here is what NDD said in his latest weekly review. Long leading indicators look fine, which suggests that there will be no recession in the next 12 months.

But the economy is going through a temporary soft patch:

The economy is experiencing a very severe downturn in energy production and export-related goods production and transport. On the other hand, the manufacturing portion of industrial production is only flat, not down, and the 70% of the economy reflective of domestic consumption remains positive. Q4 GDP might even be negative, and Q1 perhaps more so as excess inventories undergo further liquidation. But there simply is no broad, economy-wide downturn.

Still not convinced? Menzies Chinn at Econbrower is also find low levels of recession risk. Tim Duy came to similar conclusions based on his review of employment data and the yield curve.

Looking globally, Gavyn Davies is not finding any signs of decelerating growth:

So far, our regular monthly “nowcasts” of economic activity, which are updated in full here, have not picked up any decline in global growth, compared to the average recorded in recent quarters.

The overall growth rate in global activity is now running at roughly 3 per cent, which is actually slightly higher than than the growth rate recorded in 2015 Q3, the date of the previous global market scare. This conclusion is strengthened by the latest industrial production data, which show that the global IP growth rate has rebounded to about 2 per cent, compared to -2 per cent about a year ago.

Another major source of angst has been over the outlook for China, whose fears seem to be overblown. Menzies Chinn broke out the sources of global growth and found that while Chinese growth does form a major component, it isn’t a critical component of growth. 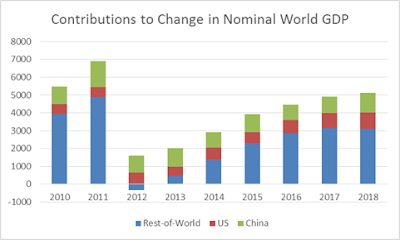 What about the possibility of a major yuan devaluation setting off a currency war? Reuters reported that Premier Li Keqiang reassured markets that China has no intention of using a cheaper yuan to boost exports. Further, recent PBoC intervention has narrowed the onshore (CNY) and offshore (CNH) yuan markets and reduced the near-term risk of a major devaluation (via Bloomberg). 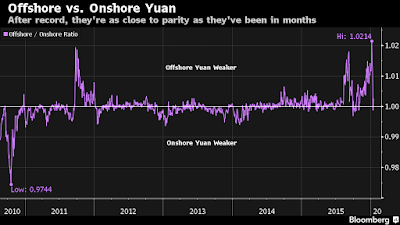 As well, the underlying economy seems to be performing better. Research from Fielding Chen and Tom Orlik of Bloomberg Intelligence indicated that there are several pieces of good news from the most recent Chinese trade data release:

How worried should you be, US growth edition

So what is the market so worried about?

In a word, earnings. The latest update from John Butters of Factset shows that forward EPS is looking a little wobbly, which is what’s really spooking the market. 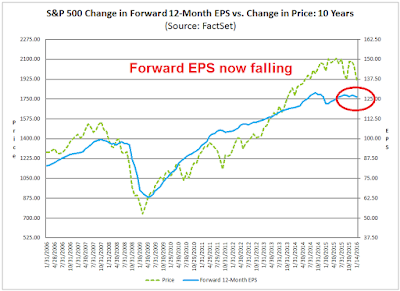 Notwithstanding the above analysis from New Deal democrat about how the US economy is going through a temporary soft patch, the bigger question is whether the weakness is likely to continue. One keys to the outlook hinges on the US Dollar. Indeed, Factset reports that currency strength has been an important feature in company earnings calls in the past year. Urban Carmel recently featured two pieces of analysis from ISI to put the USD strength story into context. First, USD strength lowered US exporters revenues by about 7%: 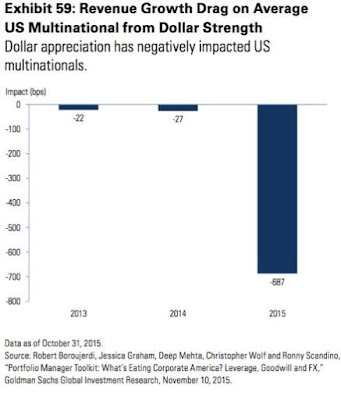 Such episodes of currency induced weakness are not unprecedented. We saw a similar mid-cycle slowdown about 1985, which is consistent with New Deal democrat`s thesis of a temporary slowdown, but no recession in 2016. 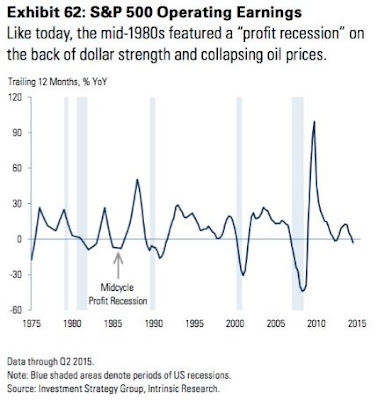 There are reasons to be optimistic. The chart below shows that upward momentum in the Trade Weighted Dollar has been falling. In the past, falling USD price momentum have coincided with economic recoveries from recessions. Unless the USD were to rally strongly from current levels, currency related headwinds to corporate earnings should start to subside in Q1 and Q2. 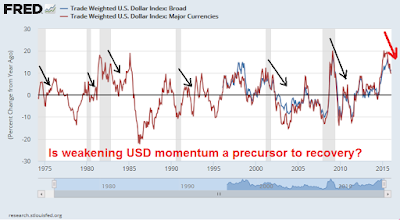 Here is another silver lining for earnings growth and USD weakness. During the recent market sell-off, investors did not bid up USD assets as a safe haven, which may be a sign that the USD has rallied as far as it can.

Another reason for optimism is the low level of expectations for earnings reports. With forward EPS estimates falling, Paul Hickey of Bespoke believes that the bar has been set too low as we head into Q4 earnings season. As the chart below shows, the spread between positive and negative Q4 estimate revisions has been very ugly. 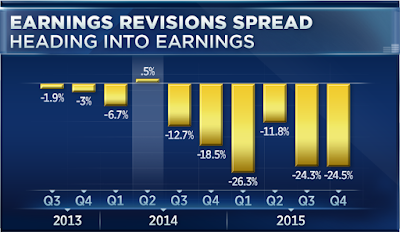 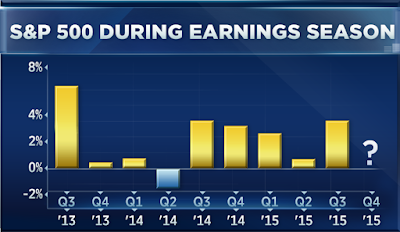 The stage is set for a potential FOMO (fear of missing out) rally.

So far, I have addressed the question of downside tail-risk (relatively low) and upside potential (hopeful because of the USD and low expectations heading into earnings season). Looking more shorter term, I am seeing numerous signs that, when put together, form a mosaic picture of seller exhaustion.

I had shown concern that even as the market fell and technical indicators became oversold, market psychology was not showing signs of washing out, or panic selling (see Oversold, but…). I tried to explain the lack of a capitulation because historical volatility, which is a key input into Value-at-Risk models, was still fairly stable and therefore did not prompt risk managers to force traders to reduce their positions (see Explaining the lack of capitulation (and what it means)).

We finally saw numerous signs of a downside wash-out on Friday. Consider, for example, this 10-year chart of AAII bears-bulls (black line) and Rydex bear to bull fund flows (green line). Past spikes in either indicator to the current elevated levels have marked bottoms in the past. 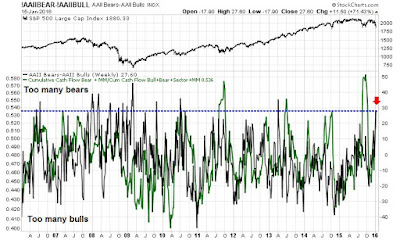 As well, the CBOE equity only put/call ratio also spike to levels on Friday indicating panic selling. This is another sign of capitulation. 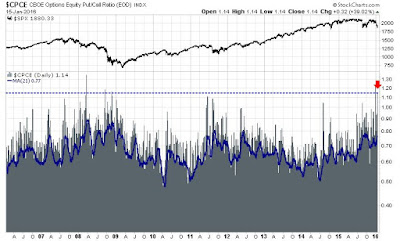 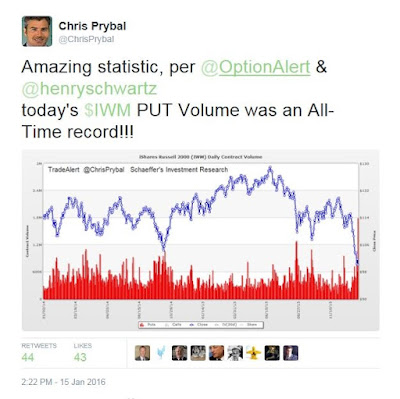 The NAAIM survey of RIA opinion also shows a high level of bearishness. 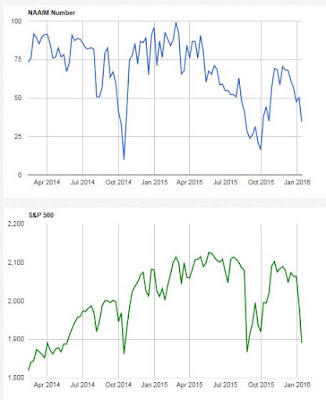 By contrast, Barron`s report of insider activity show that this group of informed investors have continued to buy in the face of market weakness.

Last but not least, here is the Drudge Report headline on Friday, which has been a good contrarian headline indicator to fade in the past.

We can discount the readings from any single indicator, but when I put all of these together, it spells capitulation.

To summarize, tail-risk is at minimal levels. Panic is setting it and blood is in the streets, it`s time to step up and buy.

My inner investor remains invested, with positions in the value theme and energy (my full portfolio is broad, but see Where my inner investor is bottom fishing for some flavor). My inner trader was caught long in the downdraft, but he is looking to add to positions next week.

4 thoughts on “Buy! Blood is the streets!”