Why I tactically shorted stocks today – Humble Student of the Markets

Regular readers recognize that my inner investor is bullish on stocks, though my inner trader remains a little leery and expects further market choppiness (see Profit by thinking like Big Money). Despite my longer term bullishness, I tweeted this morning that I had tactically taken a small, underline the word “small”, short position in SPX in my trading account. 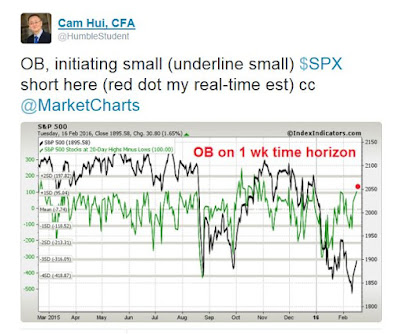 I did it for the following reasons:

Market due for a bounce

Last week, the selling had become so unrelenting that the market had become sufficiently oversold for stocks to stage an oversold rally. Trade Followers, who monitors Twitter breadth, summarized conditions this way:

The most compelling sign comes from stock market sector sentiment generated from the Twitter stream. In bull markets when every sector was positive on a weekly basis it almost always marked short term tops. We’re now in a bear market and all sectors are negative. I view this as a capitulation of sorts, where traders and investors are selling everything. This is the first time since we’ve been collecting the data that I’ve seen this condition, but the track record of all positive sectors in a bull market gives some credence to the current condition being short term bullish. 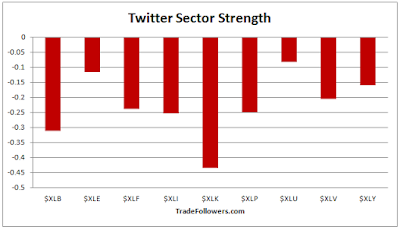 From oversold to overbought

Other measures of market breadth, like this one from IndexIndicators, tell a similar story. Readings had become gotten oversold that a rally was more or less inevitable (red dot my estimate for today). However, the chart also shows that the market had quickly moved from an oversold condition, which bottomed out last Thursday, to an overbought condition today in the space of three trading days. 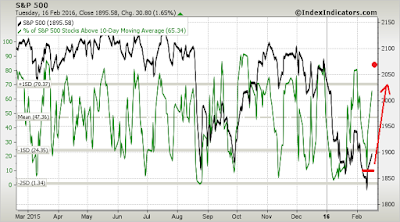 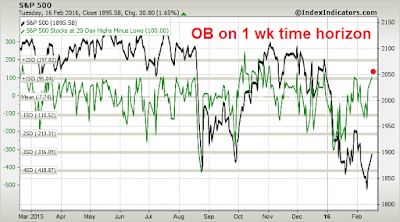 Looking even shorter term, the 5 hour RSI on the SPY chart went over 90 today. It never stays that overbought for long and a retreat is likely. Moreover, there are a couple of downside gaps that potentially need to get filled. 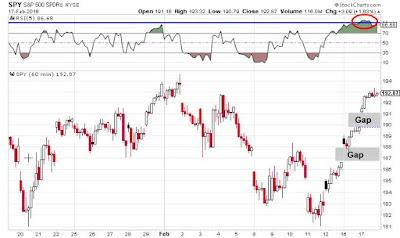 I was speaking to my former Merrill Lynch colleague and technical analyst Fred Meissner, of The Fred Report, on the weekend. He said that, technically, he believed that the tone of the market is a bear market structure, characterized by poor breadth participation and a pattern of lower highs and lower lows. Fred graciously invited me to quote from his work and he wrote in his latest sector report that he is maintaining his defensive posture:

SPY is down around 1.50 points since the last Sector Review, but it has been a good bit lower throughout the month. Caution flags are out. We will leave sector weightings the same for now – the market may be making a tradable bottom and if so we may make changes intra-month…

We still believe that deflation and China weakness (and now devaluation concerns) are the “elephant in the room”. This could exacerbate the bear market structure we are already in. We were one of the first to propound this view. It still bears watching, as Japan’s recent negative reaction to negative rates suggests.

While Fred and I don`t always agree on everything, I have a great deal of respect for his technical views. He also reminded me that this week is option expiry (OpEx), which tends to have a bullish bias. As a reminder, here is a slightly dated table from Rob Hanna of OpEx performance. February tends to be slightly positive, but not as positive as other months. If OpEx weeks have bullish biases, statistics also show that the week after OpEx tend to be mean reverting and display a bearish tendency.

Another well respected technician, Peter L. Brandt, recently made the case that US indices are forming potential tops. I won`t go through all of his charts, but here is the Dow as a sample of his thinking.

Note that Brandt qualified his opinion as “potential tops”, because as every good technician knows, a head and shoulders formation is incomplete until the neckline breaks.

Regular readers will also recall that I have fretted over a lack of capitulation selling during this latest market downturn. TRIN has stubbornly refused to spike above 2, which is indicative of “margin clerk” price insensitive selling that are the typical of a washout bottom (also see Bracing for more pain). Just compare recent TRIN readings to the behavior of TRIN during the last sell-off in August and September: 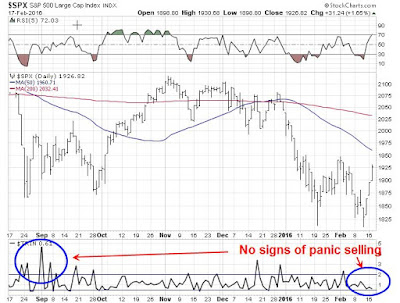 I would underline the fact that my SPX short position is a tactical trading call. As with all trading calls, I am defining my risk in terms of a potential Zweig Breadth Thrust (ZBT) that may be forming (for details of a ZBT see Bingo! We have a buy signal!). The chart below shows the ZBT signals on the top panel, the ZBT indicator in the third panel, which has 10 days from day 0 (last Thursday) to move from below 0.40 to 0.615. As Stockcharts can be a little slow in updating their signals, I have approximated a real-time ZBT indicator in the bottom panel. 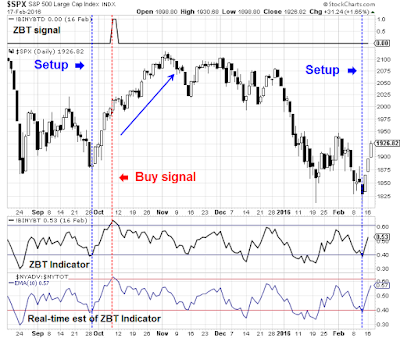 Readers who want to follow along at home can use this link for real-time updates of this chart. While I am not holding for a ZBT signal, as they are extremely rare, I am keeping an open mind and using it to define the risk of my short position.

12 thoughts on “Why I tactically shorted stocks today”