Worried about a China devaluation and currency war? – Humble Student of the Markets

I had been meaning to write about this earlier, but I didn`t find the time. Kyle Bass caused a stir last week with his letter to his investors when he wrote that China was on the verge of a major devaluation and financial blow-up (via Valuewalk):

Our research suggests that China does not have the financial arsenal to continue on without restructuring many of its banks and undergoing a large devaluation of its currency. It is normal for economies and markets to experience cycles, and a near-term downturn that works to correct the current economic imbalances does not qualitatively change China’s longer-term growth outlook and transition to a service economy. However, credit in China has reached its near-term limit, and the Chinese banking system will experience a loss cycle that will have profound implications for the rest of the world. What we are witnessing is the resetting of the largest macro imbalance the world has ever seen.

Then on the weekend, PBoC Governor Zhou Xiaochuan said in a Caixin interview that claimed that everything was fine and there was no basis for continued CNY devaluation. In response, CNYUSD rallied by 4.5% on Monday, which was the biggest move since 2005.

What’s the real story? How serious is the capital flight problem in China and what’s the likelihood of a major Chinese devaluation?

Let’s start with the Kyle Bass letter. He began by exposing in detail the severe imbalances and debt buildup in China, a problem that is well known. China’s USD 3.3 trillion may not be enough to insulate her from the coming storm, according to Bass. Firstly, Chinese foreign exchange (FX) reserves has been dropping dramatically and peaked at USD 4.0 trillion in June 2014. As well, the IMF estimates that, for a trading nation like China, minimum reserve adequacy is USD 2.7 trillion, which is not that far off the current level of USD 3.3 trillion given the rate of decline of USD 100 billion per month.

Bass further made adjustments to the USD 3.3 trillion, based on the availability of funds, and concluded that current FX reserves is actually below the magic USD 2.7 trillion deemed adequate by the IMF.

Bottom line, Beijing has few options left. None of them are good:

All roads lead to a major devaluation. To put the situation into context, this chart from Benn Steill shows the precipitous rate of FX reserves leakage out of China. 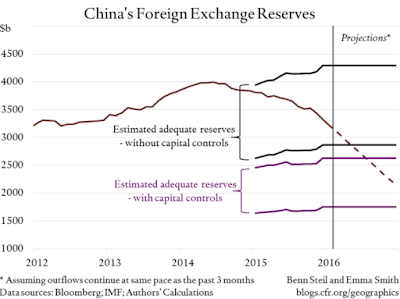 Yikes! A major Chinese devaluation has the potential to spark a currency war and cause havoc in the global financial markets.

Not as bad as it looks

I was prepared to get very bearish on China, then I came upon this analysis by Eric Burroughs, the Reuters financial correspondent for China. Burroughs dissected the funds flow and came up with several causes for the so-called “capital flight”:
Let’s go through these components, one by one. Burroughs pointed out that Chinese FX reserves have fallen by roughly USD 700 billion since its peak in June 2014. Since FX reserves are denominated in USD and the USD has been strong against major currencies around the world. With about 25-30% of FX reserves held in euros, about USD 200 billion of the “outflows” are attributable to exchange rate movements.
So we still have about USD 500 billion in outflows to account for. In a previous post (see Why China won`t blow up the world (this year)), I had referenced a Barron`s article indicating that Chinese corporations were paying down corporate debt. The chart below from Burroughs suggest that foreign currency debt has dropped by about USD 200 billion. 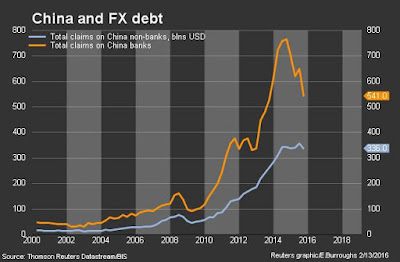 Based on the analysis so far, roughly USD 400 billion of the USD 700 billion in outflows are benign.
We still have about USD 300 billion “capital flight” to explain. For those of us with short memories, Burroughs reminded us that it wasn`t that long ago that the market was in a crowded long on CNY. There was a ton of derivative contracts betting on a rising CNY written in places like HK and Taiwan back in 2012-13 that are now coming back to haunt speculators (annotations in purple are mine). 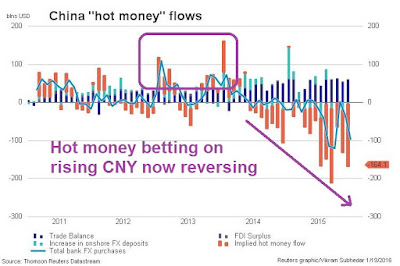 Should the market be freaked out about speculators getting hurt? Isn’t that what capitalism is all about?
Then we get into the murky part of the fund flows analysis. The blogger Concentrated Ambiguity took at look at the invoicing flows from Chinese trading companies in and out of China. Here are the figures from State Administration of Foreign Exchange (SAFE) for 2015, in which the gross flows are shown before netting. 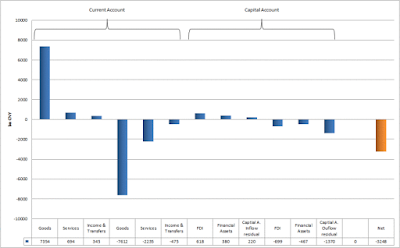 Bottom line, most of the outflows came from the categories “services” and “capital account residual”. But the figures for these accounts were already negative were already in 2014! The biggest change was an inflow for “goods” in 2014 turned slightly negative in 2015.

There are two possible explanations. The more sinister explanation is over-invoicing, where corporations are trying to get their money abroad. A more benign explanation is corporations were hedging their currency exposures by holding more USD offshore in anticipation of a falling CNYUSD, which was a reversal of their position in 2012-13 when they over-invoiced to move more funds into CNY in anticipation of a rising CNYUSD (the hot money effect). In reality, it’s probably a little of both, but we’ll never know how much.

Since China is still notionally a communist country and notionally a command economy, one possible remedy suggested by Concentrated Ambiguity is to force Chinese companies to repatriate their profits from abroad (imagine what that would do to the likes of Apple and the US fiscal position). Dan Harris at China Law Blog reports that some heavy handed implementation of administrative measures are already taking place and it is very difficult to get money out of China these days:

Well if there is a common theme, it is that China banks seem to be doing whatever they can to avoid paying anyone in dollars. We are hearing the following:

1. Chinese investors that have secured all necessary approvals to invest in American companies are not being allowed to actually make that investment. I mentioned this to China attorney friend who says he has been hearing the same thing. Never heard this one until this month.

2. Chinese citizens who are supposed to be allowed to send up to $50,000 a year out of China, pretty much on questions asked, are not getting that money sent. I feel like every realtor in the United States has called us on this one. The Wall Street Journal wrote on this yesterday. Never heard this one until this month.

3. Money will not be sent to certain countries deemed at high risk for fake transactions unless there is conclusive proof that the transaction is real — in other words a lot more proof than required months ago. We heard this one last week regarding transactions with Indonesia, from a client with a subsidiary there. Never heard this one until this month.

4. Money will not be sent for certain types of transactions, especially services, which are often used to disguise moving money out of China illegally. This is not exactly new, but it appears China is cracking down on this. For what is ordinarily necessary to get money out of China for a services transaction, check out Want to Get Paid by a Chinese Company? Do These Three Things.

5. Get this one: Money will not be sent to any company on a services transaction unless that company can show that it does not have any Chinese owners. The alleged purpose behind this “rule” is again to prevent the sort of transactions ordinarily used to illegally move money out of China. Never heard this one until this month.

Putting it all together, what do we have? Of the approximately USD 700 billion in “capital flight”, about USD 400 billion is benign, accounted for by a falling euro and Chinese corporations paying down their USD external debt. The remaining USD 300 billion can be explained by a combination of the reversal of hot money flows, trade flows and actual “capital flight”.

Even the term “capital flight” has highly negative connotations, but how real is that? One man’s capital flight is another man’s portfolio diversification. Could this all be a tempest in a teapot?

We have all heard about the phrase “it’s not you, it’s me” in a relationship breakup. Is falling CNYUSD reflective of capital flight out of China, or just a strong USD? The chart below shows that the trade-weighted Yuan has been fairly steady since March 2014. 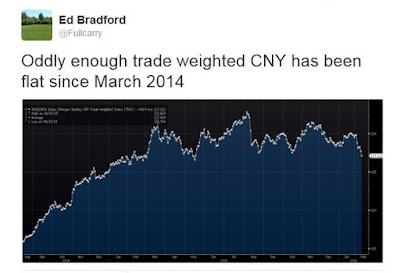 3 thoughts on “Worried about a China devaluation and currency war?”