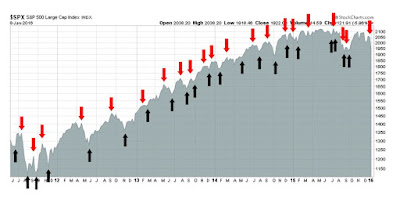 A glass half-full, or half-empty?

Wow! I realize that when I tactically turned negative on stocks last week, this kind of downdraft would happen (see The road to a 2016 market top). Regardless, David Rosenberg had an excellent piece of advice with his “Breakfast with Dave” last week for investors (for traders, it’s another story):

I have three pieces of advice of my own to all the nervous nellies out there, not to mention the nattering nabobs of negativity, turn off the television, focus on the big picture, and review your asset mix.

I agree. During these times of market turmoil, I ask myself if any of the following triggers for a bear market are in place:

The answer to the first question is obviously no.

As for the third question, the Fed is just starting a tightening cycle and they have made it clear that they plan on being slow and gradual. Moreover, various Federal Reserve officials have indicated that they are tolerant of inflation being slightly over target in order to bring the economy back to full employment. So the Fed can hardly be characterized as being aggressive.

In short, the triggers for a bear market are not there. But what`s spooking the markets? I can summarize the worries as:

I will address each of these issues one at a time, based on a bull vs. bear, or glass half-full or half-empty framework. Finally, I will touch on the market outlook in a more tactical fashion, based on the readings from sentiment models and technical analysis.

The North Korean H-bomb test was, at best, a one-day wonder for global markets. Seismic analysis indicates that it probably wasn’t even a full H-bomb. A full H-bomb test would have generated a more powerful earthquake (via the BBC): 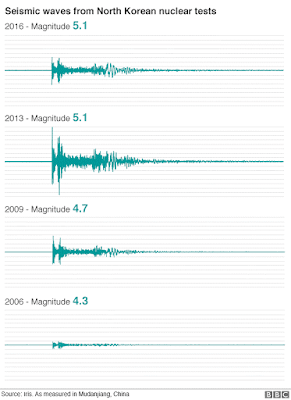 In any event, we have to ask ourselves about the market implications of this event. North Korea is a rounding error in the size of the global economy. Even if North Korea had developed a H-bomb, would their soldiers flood south over the DMZ? Are they going to nuke Seoul or bombard it with artillery? If not, why should the markets care?

The world was jolted last week by the Saudi decision to execute a Shiite cleric. The ensuing protests, in both KSA and Iran, reverberated throughout the region.  As a consequence, Saudi Arabia broke off diplomatic relations and trade ties with Iran and a number of her other Gulf State allies also downgraded relations with Tehran too.
For the markets, these kinds of regional tensions are a concern and undoubtedly raise the risk premium on asset prices. On the other hand, oil prices spiked for one whole day and fell back. If the oil market doesn’t view this as significant, should you?

The biggest scary headlines for the markets last week came from China. But Cullen Roche put the concerns over China into context. Firstly, the Chinese stock market is a big casino dominated by small uninformed retail punters. Moreover, its movements are not very correlated with the US equity prices. 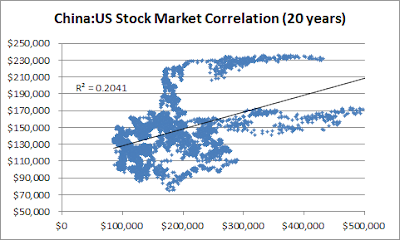 Chinese GDP growth rates are not correlated with US stock prices either. 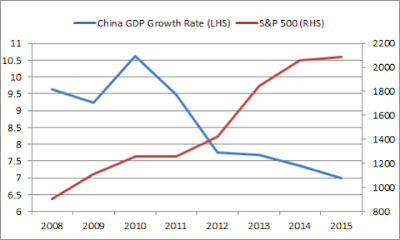 The biggest worries are stem from Beijing initiating a program of competitive devaluation, to the detriment of her Asian trading partners, or if the Chinese economy unravels into a hard landing.

First, while it is true that the offshore yuan (CNHUSD) exchange rate spread against the onshore yuan (CNYUSD) has widened considerably, which is pressuring CNY downwards and thus the risk of whole devaluation is rising, that may be the wrong perspective to take. Menzie Chinn at Econbrowser pointed out that the trade weight yuan has actually been appreciating over the past year so a downward adjustment is not unwarranted at all. 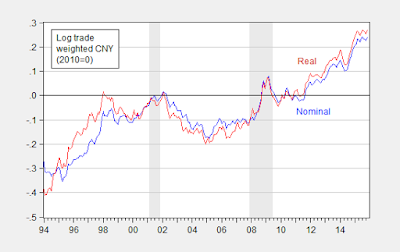 As for the concerns over a slowing Chinese economy, it is difficult to see that Beijing would stand idly by and watch the Chinese economy crater into a hard landing when the PBoC has a lot of ammunition left in its monetary holster. Interest rates are nowhere near zero bound and the reserve ratio (RRR) is still high at 17.5%. If push came to shove, the PBoC also has the option of engaging in quantitative easing (QE).

If the PBoC were to engage in shock-and-awe scale monetary stimulus, however, it would put downward pressure on the yuan, everything else being equal. But everything else isn’t equal, because this kind of policy action would be positive for the growth outlook and therefore yuan bullish.

So is the glass half full or half empty?

The last major worry that seems to be bothering the markets is the prospect of slowing growth. The Atlanta Fed GDPNow nowcast of Q4 growth has fallen to 0.8%.

Much of the slowdown has been driven by weakness in manufacturing, as exemplified by the weak ISM Manufacturing release. However, Charlie Bilello pointed out that ISM Manufacturing has had a spotty record of forecasting recessions in the past (also see these comments from David Rosenberg). 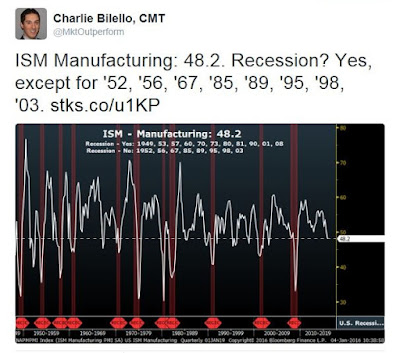 My own analysis found that the USD is inversely correlated with ISM (note ISM is shown in an inverted scale in the chart below). 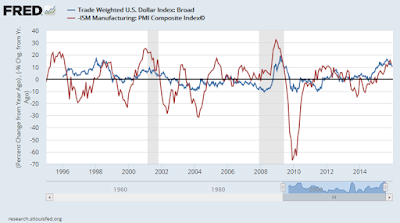 So we are back to the story of a strengthening USD holding back the US economic and profit growth outlook again. Indeed, the latest update from John Butters of Factset shows that forward EPS revisions have been roughly flat in the last few weeks. In short, that may be the main reason spooking stock prices. 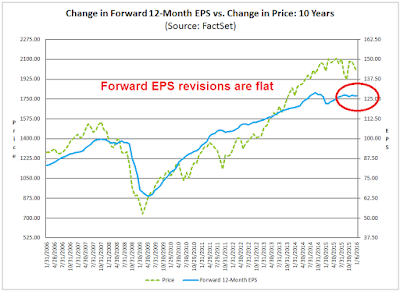 There are a number of reasons to be more optimistic in the next few months. The Dollar is starting to weaken as growth differentials narrow. China is undoubtedly poised to unleash another round of stimulus, which should boost growth rates. The outlook for European growth is also getting better. Eurozone unemployment and confidence have improved to 2011 levels… 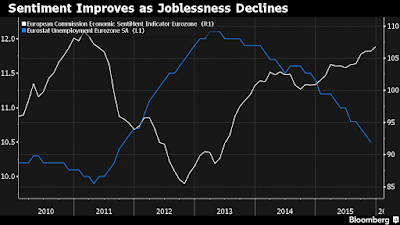 and PMIs have been rising as well. 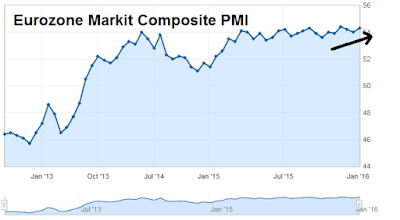 In his weekly monitor of high frequency US economic releases, New Deal democrat is starting to discern an inflection point in growth rates:

The bad news is, the downturn in coincident data is now so drastic that I suspect we are going to get a negative GDP print either for Q4 2015 or Q1 2016. Meanwhile, there are some interesting things happening at the margins of the data. My suspicion is that we are getting close to the longer term bottom in the commodity collapse, and it is interesting that aside from oil, industrial commodities did not make a new low this week. The decline in wholesale inventories is the first sign that a liquidation may be beginning (one reason why I think we may get a negative GDP print). The further big pulse down in rail transport may also be a sign of a beginning of inventory liquidation via a big downturn in new orders (also shown in the ISM manufacturing release). Tax withholding for December wobbled a little bit, and YoY Real M1 decelerated to a new 5 year low. On the other hand, lower mortgage rates will give a little boost to the housing market. I still see this as a global trade driven inventory correction rather than the onset of a recession. Housing permits and Q4 residential investment will be particularly important when they are released later this month.

Putting this all together, I interpret the current stock market environment as corrective and not the start of a major bear market. Corrections happen all the time. Investors shouldn’t be overly worried.

For traders, it’s a entirely different ball game. I wrote on Monday that while the stock market appeared to be oversold, I expected further downside for the week (see Oversold, but…). What I didn’t expect was the magnitude of the downdraft. On Thursday, I fretted that while short-term indicators were at oversold extremes indicating a bounce was at hand, but I was concerned that signs of fear and capitulation were not fully evident. I concluded that any rally would likely be short-lived (see A tradeable bottom?).

Mark Hulbert came to a similar conclusion. There just isn’t enough fear out there. 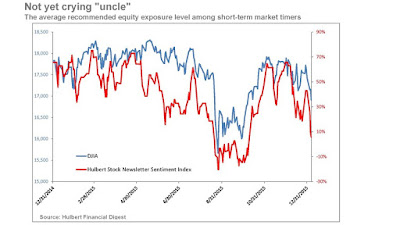 Brett Steenbarger also observed that his cycle indicators are not yet at levels seen at intermediate term bottoms yet. 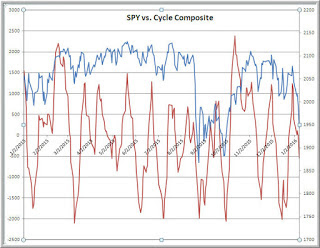 I don’t mean to imply that everything looks bearish as there are some constructive signs for stocks. As an example, the relative performance of junk bonds is actually doing much better an tracing out a positive divergence against stock prices. 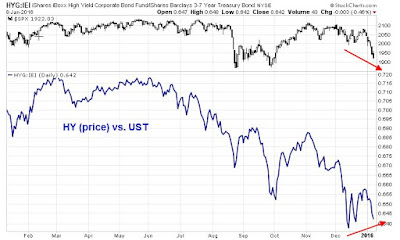 As well, the CNN Money Fear and Greed Index is nearing the top of its capitulation zone where durable bottoms have been found in the past. 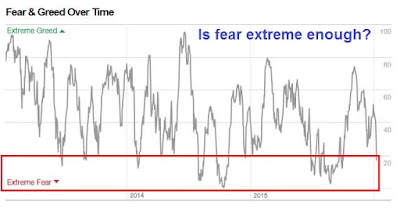 Based on these readings, two scenarios are in play next week. The stock market could either sell off further into a capitulative sell-off, or the market could stage an oversold rally. The first scenario would represent a durable intermediate term bottom. On the other hand, an oversold rally next week would likely set the stage for a weak rebound, with further weakness into a final panic bottom some time in the near future.

My inner investor remains invested in equities, with a tilt toward natural resource sectors. My inner trader got (painfully) caught long last week. He is waiting to see how the market develops next week. If it does rally, he will be fading strength. On the other hand, he will see further weakness as an opportunity to do some bottom fishing, especially if sentiment readings reach a crowded short extremes.