A tradeable bottom? – Humble Student of the Markets

After the market closed yesterday (Wednesday), I tweeted a series of charts indicating that the market appeared to be oversold, but fear levels weren’t extreme yet:

I had concluded that a bottom was near, but we may need a further wash-out before a tradeable bottom could be seen. The stock market weakened further on Thursday and a number of fear metrics spiked.
Is the market near a durable bottom?

It depends on what you mean by “durable” and “tradable”. The market is definitely very oversold and due for a reflex rally. Consider the following breadth metrics from IndexIndicators (red dots are my estimates). Here is the % of stocks above their 10 dma, which is a good overbought/oversold indicator over a 1-3 day time horizon: 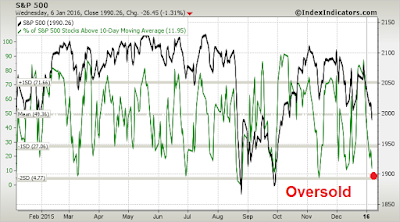 Here is the net 20-day highs-lows, which is a OBOS indicator over a 1-2 week horizon: 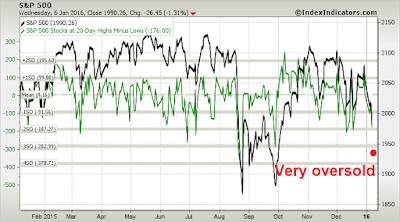 Other breadth measures, such as the % of stocks with RSI less than 30, is also at an oversold extreme: 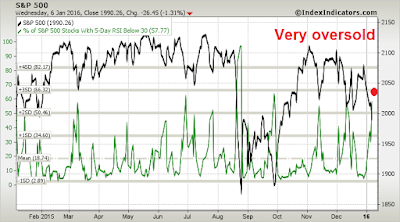 The stock market should bounce from here, but how far?

Fear rising, but is it enough?

Rob Hanna at Quantifiable Edges expressed similar concerns as I did about the lack of fear. He wrote this morning that he was also seeing the oversold conditions, but he was concerned that his Capitulative Breadth Index (CBI) was only 0, which is a very low reading. He went on to show statistics for past returns when the market was oversold and CBI was 0. The results suggest a very short-term bounce, followed by more weakness. 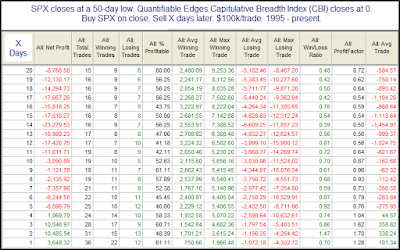 If CBI were to rise to the 1-5 range, which indicates a higher level of fear, returns improve. After 20 trading days, the average return is 1.5%, which is reasonable, but not tremendously exciting. 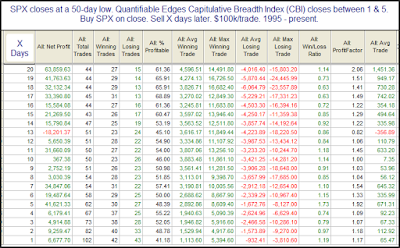 Contrast the above results when the market is oversold and CBI is over 10, where the average 20 day return is over 5%. 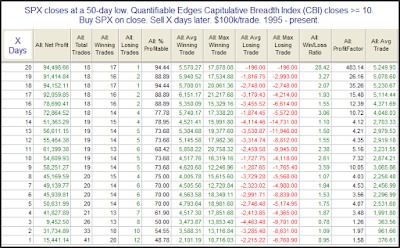 I don’t know what goes into CBI are, but I can make an educated guess as to what counts for capitulation. Here is the latest CBOE equity only put/call ratio. Readings are elevated but not extreme. 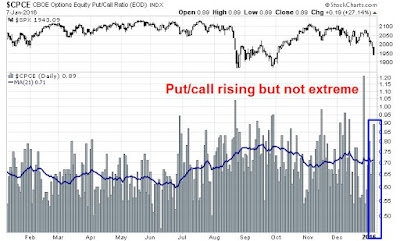 Here is my Trifecta Bottom Model (for description see Sell Rosh Hashanah?), which has had a remarkable record of spotting bottoms in the last three years (blue lines = 2/3 triggered, red lines = 3/3 triggered). The term structure of the VIX was inverted today. The TRIN Index, which shows capitulative selling when readings spike above 2, closed yesterday (Wednesday) at 1.96. So do current readings count as hitting the exacta? Well, kinda, sorta, but the signal is very marginal. 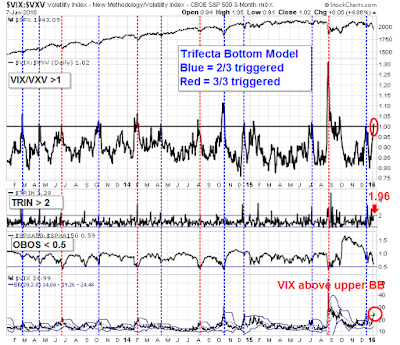 One constructive sign is the VIX Index spiked today to test its December highs. As well, it also rallied about its Bollinger Band, which is usually a sign that a bottom is near.

What to make of all this? My conclusion is that the market is poised for a relief rally. As the signs of capitulation can only be described as marginal, the rally is likely to be relatively weak and near-term market action choppy. The study from Rob Hanna with CBI at the 1-5 range might be a reasonable expectation of returns over the rest of January.

17 thoughts on “A tradeable bottom?”