The blogger Jesse Livermore at Philosophical Economics recently wrote another brilliant post about the use of trend following models and market timing. He found that trend following models work very well on diversified stock indices, but didn’t really understand the mechanism of how they worked. As I pride myself on being a left and right brained quant, I am going to try and explain why these classes of models work and why they perform poorly on individual securities.

Here is the summary of Jesse Livermore`s analysis:

In the current piece, I’m going to conduct a comprehensive backtest of three popular trend-following market timing strategies: the moving average strategy, the moving average crossover strategy, and the momentum strategy. These are simple, binary market timing strategies that go long or that go to cash at the close of each month based on the market’s position relative to trend. They produce very similar results, so after reviewing their performances in U.S. data, I’m going to settle on the moving average strategy as a representative strategy to backtest out-of-sample.

The backtest will reveal an unexpected result: that the strategy works very well on aggregate indices–e.g., the SP 500, the FTSE, the Nikkei, etc.–but works very poorly on individual securities.

He tested Mebane Faber’s moving average strategy, which he called MMA, and found that it worked well by avoiding large losses:

What the table is telling is that the strategy makes the majority of its money by avoiding large, sustained market downturns. To be able to avoid those downturns, it has to accept a large number of small losses associated with switches that prove to be unnecessary. Numerically, more than 75% of all of MMA’s trades turn out to be losing trades. But there’s a significant payout asymmetry to each trade: the average winning trade produces a relative gain of 26.5% on the index, whereas the average losing trade only inflicts a relative loss of -6.0%.

He tested a couple of other strategies, namely crossing moving averages and momentum and found that results were quite similar. The MMA results are summarized below: 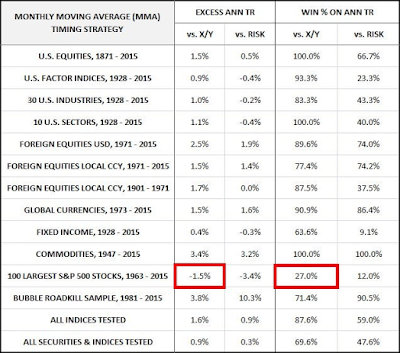 Here are the maximum drawdowns statistics for MMA: 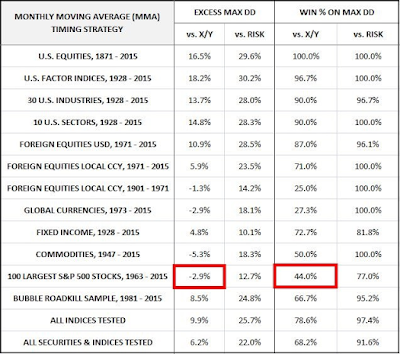 The missing piece of the puzzle is why these strategies work:

The point I’m trying to make, then, is not that the successful implementation of a strategy necessarily requires a strong analytic understanding of the strategy’s mechanism, but that such an understanding is highly valuable, worth the cost of digging to find it. We should not just cross our fingers and hope that past patterning will repeat itself. We should dig to understand.

In the early 1890s, when the brilliant physicist Oliver Heaviside discovered his operator method for solving differential equations, the mathematics establishment dismissed it, since he couldn’t give an analytic proof for its correctness. All he could do was put it to use in practice, and show that it worked, which was not enough. To his critics, he famously retorted:

“I do not refuse my dinner simply because I do not understand the process of digestion.”

His point is relevant here. The fact that we don’t have a complete analytic understanding of a strategy’s efficacy doesn’t mean that the strategy can’t be put to profitable use. But there’s an important difference between Heaviside’s case and the case of someone who discovers a strategy that succeeds in backtesting for unknown reasons. If you make up a brand new differential equation that meets the necessary structure, an equation that Heaviside has never used his method on, that won’t be an obstacle for him–he will be able to use the method to solve it, right in front of your eyes. Make up another one, he’ll solve that one. And so on. Obviously, the same sort of on-demand demonstration is not possible in the context of a market timing strategy that someone has discovered to work in past data. All that the person can do is point to backtesting in that same stale data, or some other set of data that is likely to have high correlations to it. That doesn’t count for very much, and shouldn’t.

In this day and age, investment consultants use a standard 4Ps framework to dig behind investment managers to understand whether a performance record is repeatable, so a response of “I do not refuse my dinner simply because I do not understand the process of digestion” is unlikely to cut it. The 4Ps are:

For the purposes of the current discussion, the first two points are not relevant. I am going to focus mainly on point 3, philosophy, and 4, how I use trend following models in my work.
To answer the question of how trend following models work, I start with a story. A number of years ago I was hired to run an equity market neutral portfolio at a hedge fund. The hedge fund was primarily known as a Commodity Trading Advisor (CTA) which used trend following models. Even though I knew nothing about the specific details of the trend following models, I knew that  they used multiple moving averages.
I naturally asked the question, ”Why do these models work?” No one gave me a satisfactory answer, not the research director, not the marketing people, no one. They all shrugged, ”I don;t know. It just works.”
Days and weeks passed. I noticed that the futures traders in the next room trading the trend following models would sometimes be totally white knuckled. Even though the models were supposed diversified over a number of different contracts, the positions would end up as one big macro bet at the end of the day – whether it would be on the direction of interest rates, foreign exchange, inflationary expectations, etc. If a key economic statistic that gets released the next day, such as the Employment Report, goes the wrong way, the fund would suffer substantial losses.
A light came on in my head. The reason why this class of model work is because they identify macro-economic trends, which tend to be persistent. Trends show up in commodities, e.g. the USD, commodities, interest rates, but the trends are all correlated with a specific macro trend – and these trends are persistent. For example, when the Fed begins a tightening cycle, the action in the next FOMC meeting is either no action or to raise rates. The likelihood of a rate cut is minimal. That represents a trend, which can be profitable if exploited correctly.
If we go back to the framework of investment philosophy and process, we can then state that the source of alpha, or investment philosophy, of a manager that uses trend following models is the identification and exploitation of macro-economic trends.

This reason behind why trend following models work is not that difficult, but suffers from a persistent cultural bias. The vast majority of users of trend following models, or moving averages, come from a technical analysis background. The vast majority of institutional investors tend to be fundamentally oriented – and the two groups have never really mixed well. It took a quant like me, who understood both technical analysis, macro analysis and quantitative analysis to put it all together.

Today, I apply trend following techniques to global stock indices and commodity prices to spot trends in global reflation and deflation to arrive at a risk-on or risk-off reading for timing US equities. Results have been reasonably good, as the chart below of out-of-sample signals show.

Jesse Livermore’s result that trend following models don’t perform well for individual securities is not surprising. If the investment philosophy is to utilize trend following models to spot macro-economic trends, applying these models to individual stocks dilutes the effect of these models and creates excessive noise in the form of stock specific risk,

11 thoughts on “Revealing the secret behind trend following models”