What’s “Black Swan” in Chinese? – Humble Student of the Markets 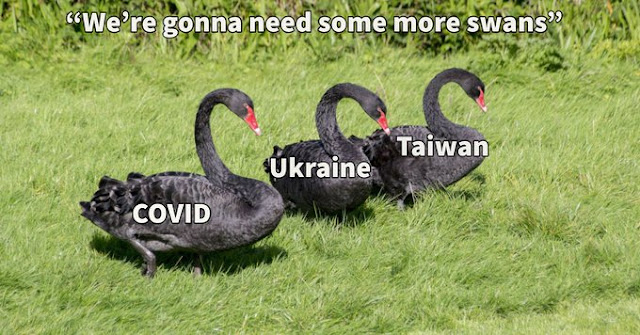 And just as I predicted on the weekend (see In what world is fighting the Fed a good idea?), we’ve had a cacophony of Fed officials pushing back on market expectations of an imminent pause in rate hikes. Bond yields spiked in response.
Here is what I am watching.

As the world watched Pelosi’s aircraft approach Taiwan, former Global Times editor Hu Xijin suggested that China would intercept her plane and force it to land elsewhere, which would have caused an international incident. Fortunately, the intercept never occurred. While the Chinese registered their protests over the Pelosi visit and promised a forceful response, the response was highly measured and World War III didn’t begin.
Instead, China announced a number of trade sanctions and a series of military exercises, with life-fire exclusion zones around the island of Taiwan reminiscent of the Third Taiwan Strait Crisis. It was a signal that China could effectively blockade Taiwan without an actual invasion. The good news for investors is the markets shrugged off the Third Taiwan Crisis in 1996, the bad news is that crisis didn’t occur when the Chinese and global economy were undergoing a soft patch which makes markets vulnerable to risk-off episodes. 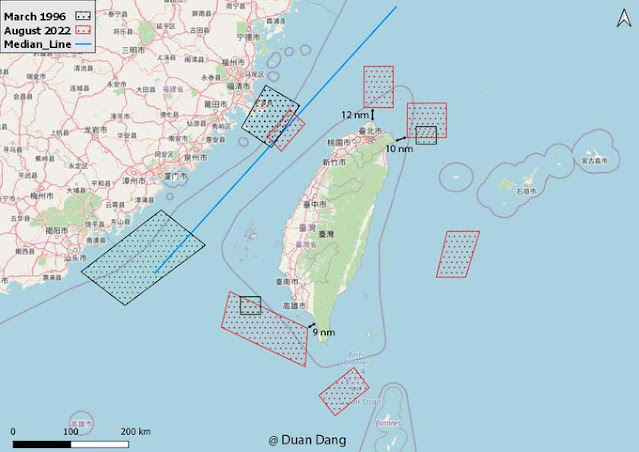 It appears that both the Pentagon and PLA have been in close contact with each other during the current episode, which reduces the risk of a mistake that could unnecessarily spiral into unintended hostilities. For investors, this is good news as a hot war would disrupt semiconductor production that would snarl supply chains all over the world.

On the monetary policy front, a flood of Fed officials pushed back against market expectations of a dovish pivot. The tables below show how Fed Funds expectations have changed, before the FOMC meeting, just after the meeting, and where they are today. After the meeting, the market began to discount a brief peak in the Fed Funds rate that begins in late 2022, with easing to begin by March 2023. After yesterday’s and today’s Fed speakers: 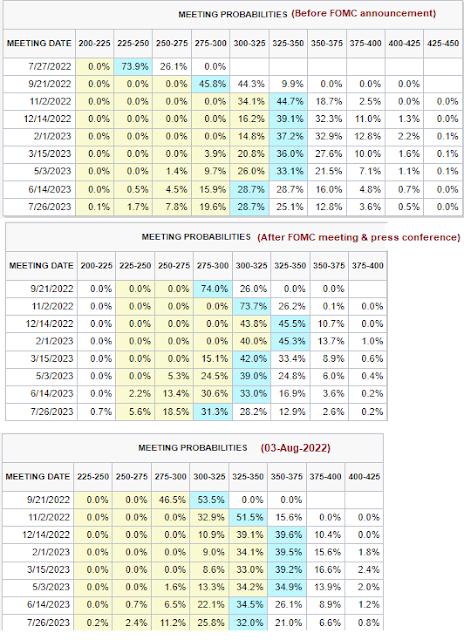 I previously highlighted a possible head and shoulders breakdown in Treasury yields. While the 10-year Treasury yield did break the neckline, yesterday’s Fed guidance pushed yields back above the neckline. For chartists, there is nothing worse than a failed breakout or breakdown. 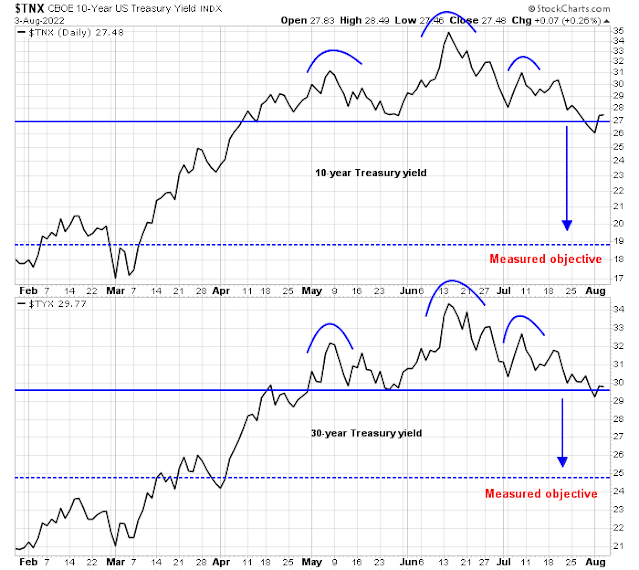 Bond bulls have one last chance this week in the form of the July Jobs Report. The June JOLTS report shows that both job openings and quits fell, indicating labor market weakness.

Initial jobless claims also show a pattern of softness in the labor market.

The market consensus calls for NFP to come in at 250K, down from 372K in June. NFP has printed four consecutive upside surprises so far. A fifth positive surprise would put the final nail on the coffin of the bond bulls, a miss would be consistent with the recent pattern of economic weakness.

I observed on the weekend that the S&P 500 had been going on an upper Bollinger Band ride, which may be continuing. However, the index is in the process of testing a key 50% retracement resistance level.

What’s holding up the market?
One clue is a less bad earnings season. With 320 components of the S&P 500 reported, the EPS beat rate is 75% (5-year average 77%) and the sales beat rate is 66% (5-year average 69%). While beat rates are below par, they appear to be less than expected going into Q2 earnings season. The good news is earnings results validated that the economy isn’t in a recession. The bad news is forward 12-month EPS estimates are falling, which is a worrisome development. 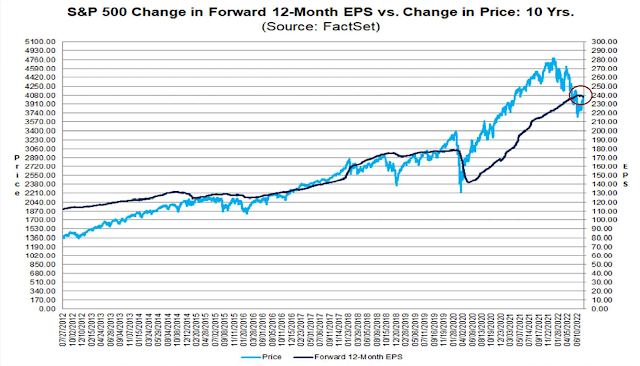 FactSet’s earnings update, based on last Thursday’s data, showed that analysts were downgrading EPS estimates for every quarter except for Q2, which makes valuation more challenging. 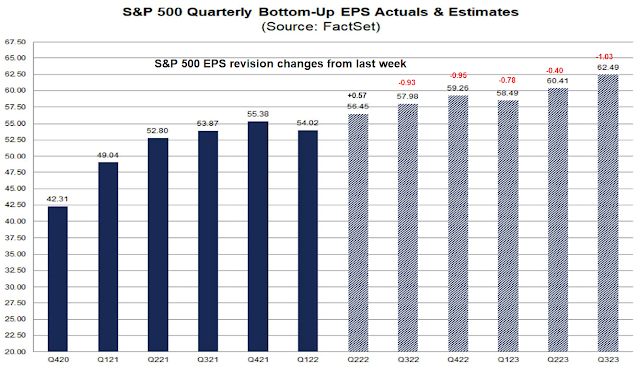 The combination of nearby overhead resistance and growing valuation challenges leads me to believe that the S&P 500 is likely to undergo some choppiness in the coming weeks. The market underwent a breadth wipeout in mid-June and recovered. I am waiting for the percentage of S&P 500 stocks to rise above 90% to sound the all-clear, which hasn’t happened yet. There have been seven similar episodes in the last 20 years. The shortest period between the breadth wipeout and the all-clear signal was two months (2019) and the longest was nine months (2003). The market made a V-shaped bottom on two occasions and re-tested the old lows on the other five. The re-tests were all accomplished with positive 14-day RSI divergences. 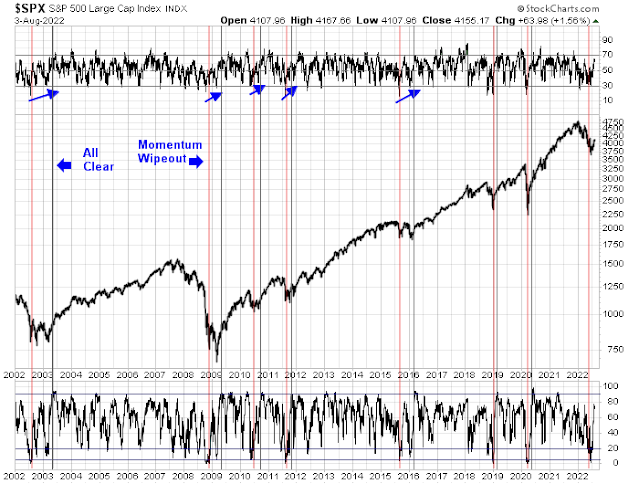 The odds favor a re-test. That’s why my base case scenario calls for a period of sideways consolidation and choppiness. The market is short-term overbought. Wait for the pullback.
My inner investor is neutrally positioned. My inner trader is on the sidelines as he waits for a better opportunity.