There is a growing acceptance among investors that the global economy is sliding into recession. S&P Global, which was formerly known as IHS Markit, reported:

The global manufacturing PMI survey’s Output Index, which acts as a reliable advance indicator of actual worldwide output trends several months ahead of comparable official data (see chart 2), signaled stalled production in July. The stagnation signals a faltering of the global production rebound seen in June from two months of contraction in April and May. 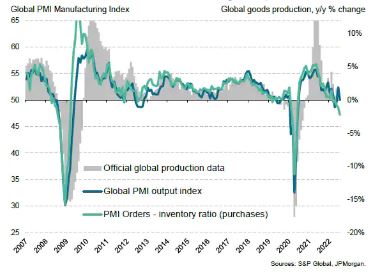 The conventional view suggests a synchronized global recession. The more nuanced view is the world is undergoing a rolling recession, which offers more opportunities for investors.

A more detailed analysis of the new orders component of manufacturing PMI shows that not all regions are the same. In particular, new orders in the eurozone have been the worst, while Asia ex-Japan and China have performed the best. In other words, it’s a rolling recession as economic weakness rolls from one region to the next. Investors should position themselves accordingly. 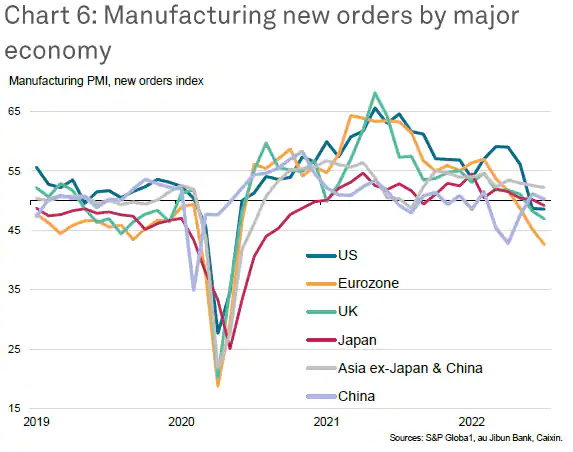 With that preface, I will examine the outlooks for the three major global trade blocs, Europe, China, and the US. 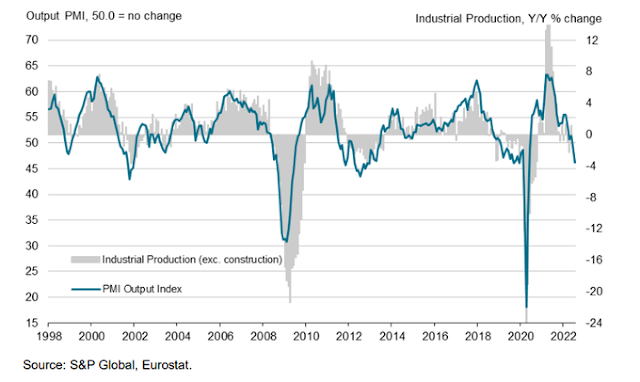 The weakness is also reflected in the Citigroup Eurozone Economic Surprise Index, which measures whether economic indicators are beating or missing expectations. 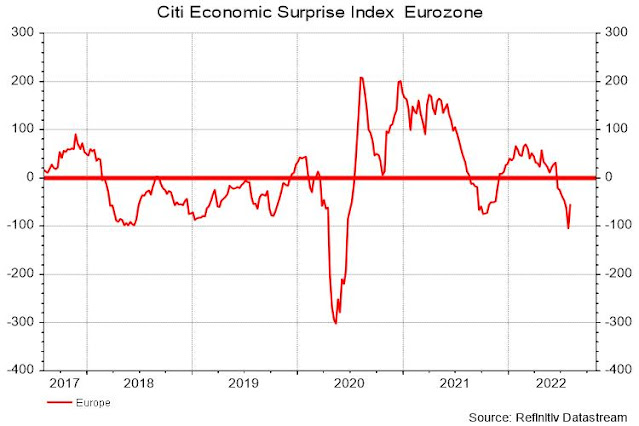 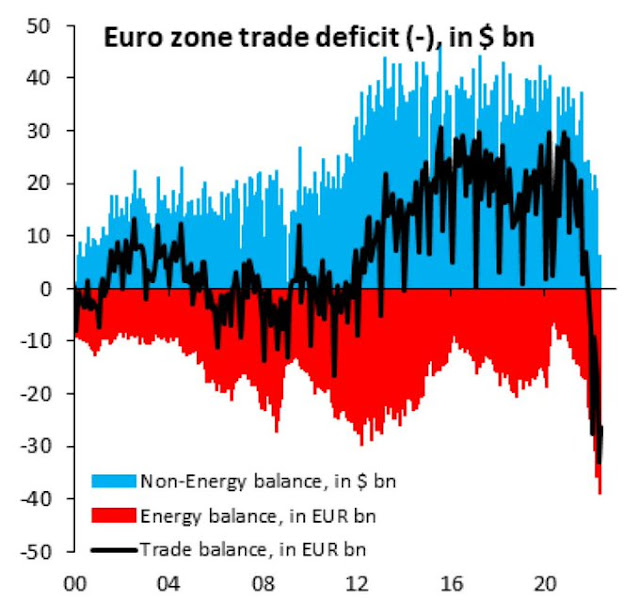 A slump in China

An analysis of the Chinese economy reveals a broad picture of softness. Its trade balance with Germany and Korea, which export capital equipment to China, is in deficit, indicating weakness in manufacturing and exports. 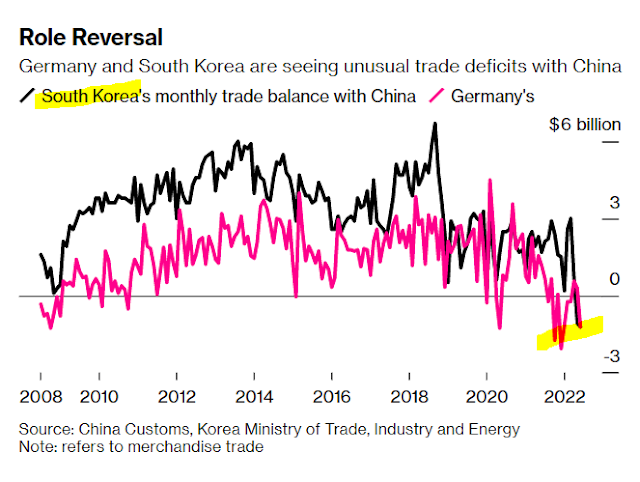 China is beset by the triple whammy of property market troubles, falling consumer confidence, and a lack of stimulus. Shehzad Qazi of China Beige Book International, which monitors the Chinese economy on a bottom-up basis, stated in a CNBC interview that he is seeing widespread weakness and the country’s manufacturing, services, and retail sectors are all struggling.

Evergrande failed to deliver a promised US$300 billion restructuring plan last week, which caused further loss of confidence in China’s property sector. Developers are facing a liquidity crunch and high leverage ratios. Half-built and incomplete projects are leading to a mortgage boycott groundswell, which is feeding into a negative feedback loop as suppliers to property developers are in turn facing liquidity problems. Bloomberg reported that Chinese banks may face up to $350 billion in loan losses from the property crisis – and that figure doesn’t include the non-bank financing that developers tapped from the shadow banking system. 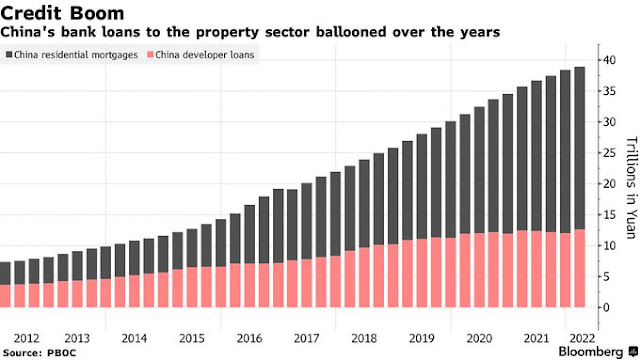 As Chinese developers encounter a cash crunch, the overdue accounts of their suppliers are growing, which is creating a domino effect and negative feedback loop for the economy. 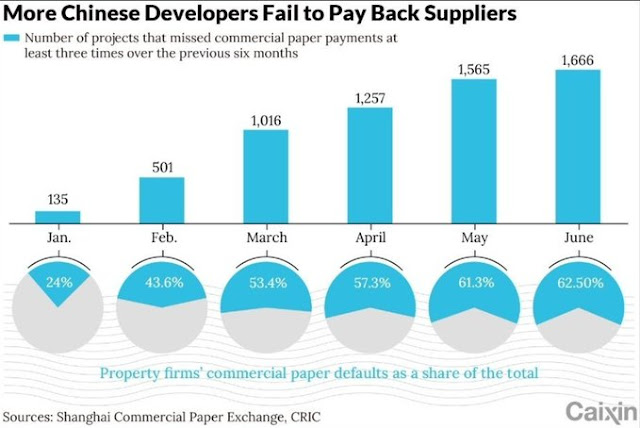 In addition, China’s zero-COVID lockdowns have shaken consumer confidence, which is also leading to the malaise in the labor market as employers are hesitant to hire in an uncertain and weak environment. Shehzad Qazi of China Beige Book International recently testified before the U.S.-China Economic and Security Review Commission. He had a sobering outlook for China’s zero-COVID policy and forecasted that it’s here to stay for some time.

At this point it can be reasonably assumed, that China’s zero-COVID policy is here to stay until the country has access to mRNA vaccines with high efficacy rates and is also able to vaccinate a vast majority of its population, especially the elderly. This pushes any lifting of zero-COVID as it is implemented today well into 2023 if not beyond.
This then suggests that the Chinese economy will remain under pressure for the foreseeable
future as new virus outbreaks emerge and lockdowns go into effect, especially in more economically developed regions. Furthermore, it paints an especially concerning picture for the services and retail sectors of the Chinese economy which have suffered the most from lockdowns. This, of course, has long-term consequences as it will only push any rebalancing to a consumption-driven economy further into the future. 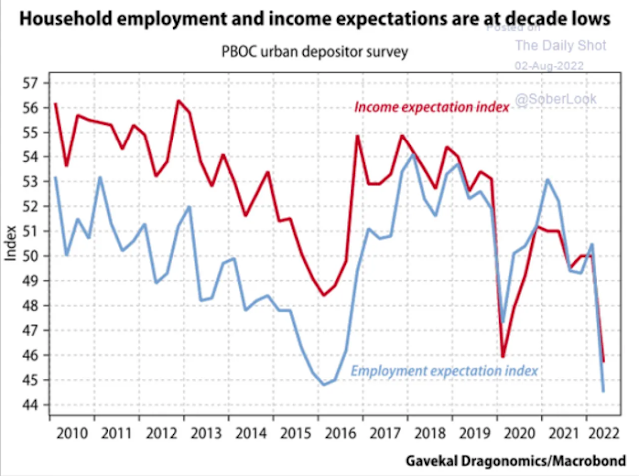 In the past, Beijing has stepped in with new stimulus whenever the economic outlook has skidded this badly. However, the July Politburo meeting offered little relief. Officials affirmed that the zero-COVID policy takes priority over growth imperatives. Policy makers indicated that they will stay their current course and not look to ramp up policy support.

Current economic operations are facing some prominent contradictions and problems. We should maintain strategic concentration and firmly do our own work.

Officials made it clear that COVID policy tops the agenda as pandemic containment is the pre-condition to stable economic growth: “When an outbreak occurs, we must immediately and strictly prevent and control it.” In short, senior officials offered no new ideas for economic management in the second half of the year and no initiative that hasn’t already been telegraphed:
The WSJ reports that tension is growing between the central government and regional authorities. Regional governments are becoming increasingly growth constrained and their finances are shaky as the source of funds has been land sales in the past. As Bejing increases its focus on risk control, it is creating a credit crunch for local governments.

China’s property market slowdown and strains from the country’s zero-Covid-19 campaign are putting new pressure on local governments’ finances, forcing some to rein in spending, adding another drag on China’s weakened economy.
Local governments, which shoulder much of the expense for education, healthcare and other services in China, were already struggling with high debt loads and unsustainable expenses as 2022 began.
Now the strains are getting worse. Cities must fund costly mass Covid testing programs imposed by Beijing to try to keep Covid-19 caseloads near zero. They are also being asked by Beijing to support stimulus meant to revive growth, including tens of billions of dollars’ worth of railways and other infrastructure projects.

Is China in a recession? It’s a close call. The Fathom China Momentum Indicator has fallen to 0.2%, indicating extremely grim growth conditions. 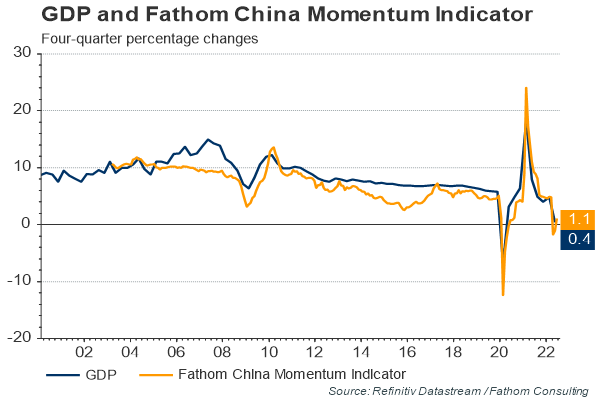 Across the Pacific, America isn’t in recession despite two consecutive quarters of negative GDP print. Ryan Detrick pointed out that NBER, which is the committee that is the ultimate arbiter of recessions, focuses on six metrics: nonfarm payrolls, household survey, real personal income (less transfers), real PCE, industrial production, and real manufacturing. Five of the six are positive on a YTD basis, indicating there is no recession. That’s the good news.
The bad news is the economy is weak and sliding into recession. New Deal democrat, who maintains a disciplined process of recession forecasting with a set of coincident, short-leading, and long-leading indicators, recently conceded that a recession in Q1 is almost a certainty.

The long leading forecast continued to be negative, despite even more resilient corporate profits. My “Recession Watch” start time of Q1 of next year continues. The short term forecast also remains negative, as initial jobless claims and the regional Fed new orders indexes continue to trend more or to remain negative.

NDD did leave the door open for a soft landing:

Hopes for a “soft landing” must rely on the possibility that gas prices will decline further enough fast enough to make a big dent in inflation, assisting consumer spending, and perhaps making the Fed pause, as otherwise all the signs point to recession soon, with only the start time – and the intensity – open to discussion.

Joe Wiesenthal at Bloomberg also cited some encouraging signs of a soft landing.
However, the Fed has embarked on a concerted push to convince the markets that it is not on the verge of a dovish pivot. It flooded the speaker circuit with a variety of interviews and speeches by Fed regional presidents, beginning with Minneapolis Fed President Neel Kashkari, who is regarded as a dove. In a NY Times interview, Kashkari said officials are a long way from backing off the inflation fight. San Francisco Fed President Mary Daly, another dove, told a Reuters Twitter Space that the neutral rate won’t be reached until about 3.1%. And it will need to be restrictive. St. Louis Fed President James Bullard, a hawk, said he favored a Fed Funds rate of 3.75-4.00% by the end of 2022.
The strong July Jobs Report cemented the expectations of a hawkish Fed. Non-Farm Payroll came in at 528K (250K expected). Average hourly earnings rose 0.5% for the month (0.3% expected), and the unemployment rate fell from 3.6% to 3.5% (3.6% expected). These figures are all above expectations indicating a strong economy and room for the Fed to take more aggressive steps to tighten monetary policy.
My base case calls for the US to enter a recession in early 2023.

What does this all mean for investors? The conventional recession trade is to buy USD assets, with Treasury assets as the safe haven. A better way might be to buy JPY assets. The BoJ has bucked the global trend with a continued easy monetary policy while all other major central banks have tightened, which has caused incredible weakness in the JPY. If the world goes into recession, global central banks will be moving towards BoJ policy and not the other way around. This form of reverse policy convergence will put strong upward pressure on the JPY exchange rate.
For investors with equity holdings, regional rotation will be the name of the game. Investors will have to consider the tension between valuation and price momentum. The accompanying chart shows the relative performance of regional markets relative to the MSCI All-Country World Index (ACWI). The US is the market leader, and the NASDAQ 100 has been the standout since early June. Japan has gone sideways while Europe, China, and other EM have been weak. 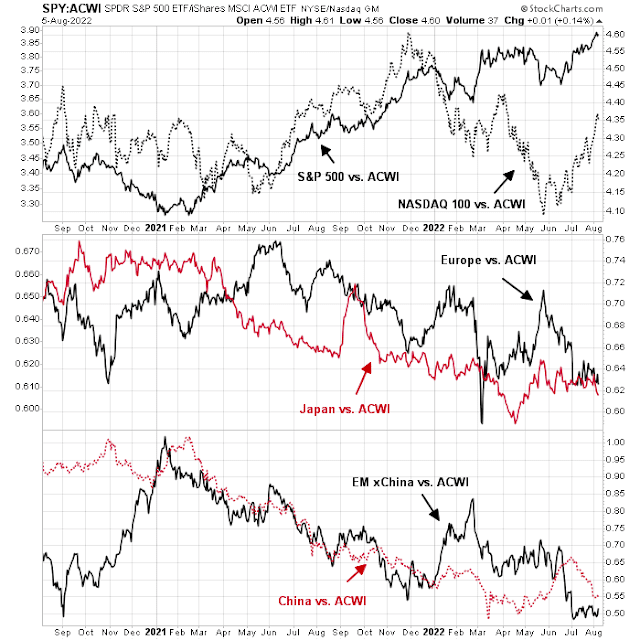 Valuation, as measured by forward P/E, tells a different story. The US is the outlier and highly valued relative to the other markets, whose forward P/E ratios are all clustered together. 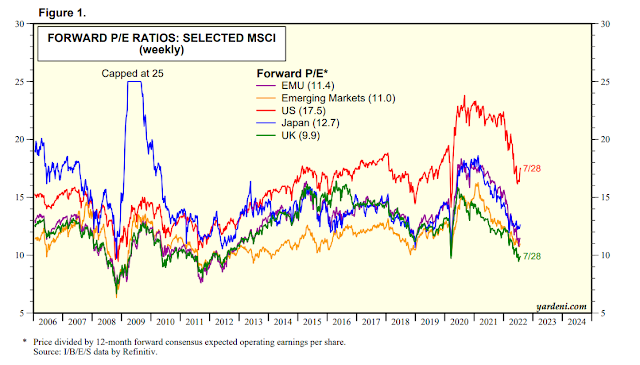 Here is how I would approach rotation among the global regions. 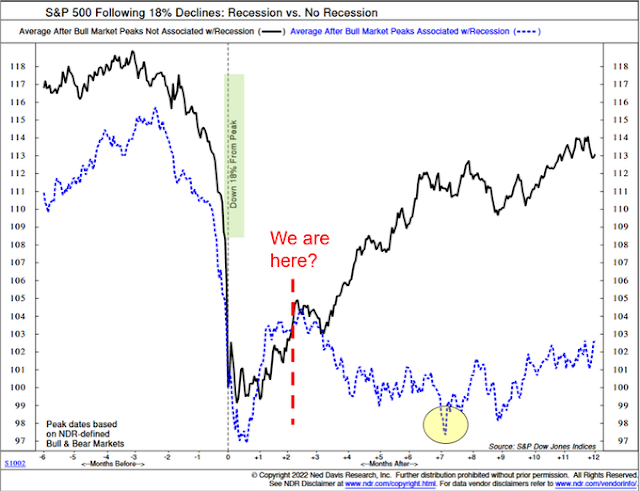 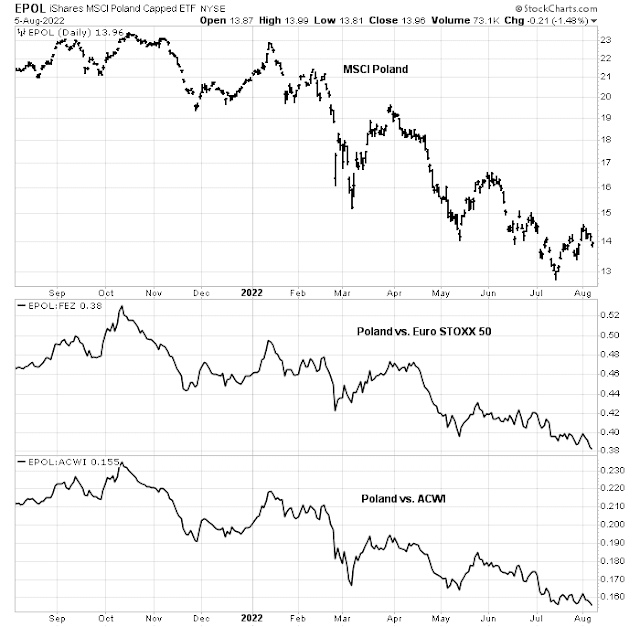