Where are we in the market cycle? From a long-term perspective, the S&P 500 is wildly oversold on the monthly MACD histogram, but the 14-month RSI has retreated to a neutral reading. Market psychology has shifted from FOMO (Fear of Missing Out) to GIDOT (Glad I Don’t Own That). 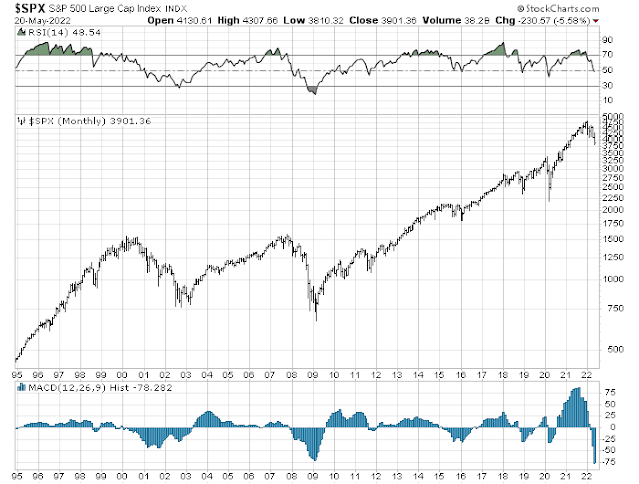 Much depends on the Fed, interest rates, and the earnings outlook.

The behavior of the stock and bond markets has seen a shift in tone over the past few weeks. The S&P 500 fell for much of 2022 and the 10-year Treasury yield has been rising in lockstep, indicating bond market concern over Fed hawkishness. In the last two weeks, bond yields peaked even as stocks weakened and the 2s10s yield curve flattened. Market psychology has changed from a fear of rising rates to the fear of an economic slowdown, which is the second phase previous specified in my publication, A 2022 inflation investing tantrum roadmap. 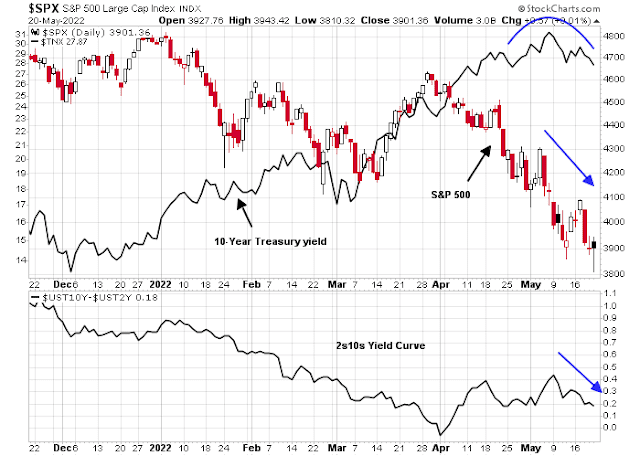 Much depends on where the Fed is in its hiking cycle. Fed Chair Jerome Powell made a series of recent media appearances. In a WSJ interview, Powell reiterated the Fed’s determination to fight inflation, “Restoring price stability is an unconditional need. It is something we have to do. There could be some pain involved.”
In a Marketplace interview, Powell underlined the message that “the process of getting inflation down to 2% will also include some pain”. More importantly, he considered the risk of elevated inflation more important than the risk of a recession.

I think it’s a very challenging environment to make monetary policy. And we certainly, our goal, of course, is to get inflation back down to 2% without having the economy go into recession, or, to put it this way, with the labor market remaining fairly strong. That’s what we’re trying to achieve. I think the one thing we really cannot do is to fail to restore price stability, though. Nothing in the economy works, the economy doesn’t work for anybody without price stability. We went through periods in our history where inflation was quite high. This was back in the ‘70s, and I was old enough to remember. I’m old enough to remember that very well. And we really, we can’t fail to restore price stability.

In other words, the Fed is willing to drive the economy into recession in order to wring inflation and inflation expectations out of the system. A soft landing would be nice, but it’s not necessarily the objective.

So a soft landing is, is really just getting back to 2% inflation while keeping the labor market strong. And it’s quite challenging to accomplish that right now, for a couple of reasons. One is just that unemployment is very, very low, the labor market’s extremely tight, and inflation is very high.

Much will depend on wages.

For example, in the labor market, there’s more demand for workers than there are people to take the jobs, right now, by a substantial margin. And, because of that, wages are moving up at levels that are unsustainably high and not consistent with low inflation. And so what we need to do is we need to get demand down, give supply a chance to recover and get those to align.

Powell gave a nod to events outside the Fed’s control, such as the inflationary pressures caused by the Russia-Ukraine war and China’s COVID lockdowns in his WSJ interview.

Still, the Fed as recently as January had expected inflation to diminish this spring as supply-chain bottlenecks improved. Russia’s invasion of Ukraine in late February and rolling Covid-related lockdowns in China created new sources of inflationary pressure.
“That is going to make it harder for inflation to come down, so it has added a degree of difficulty to what was already a challenging market,” said Mr. Powell.

Let’s take a look at an interim monetary policy report card. Two consecutive half-point rate hikes are baked into expectations in accordance with Fed communications. While the market is leaning towards a third half-point hike at the September FOMC meeting, the probability is less certain.

Here are some of the metrics the Fed is considering. Wage growth is soaring, though the less educated and lower paid workers are receiving the most. The distribution of the gains is constructive as this represents catchup from years of lagging growth. 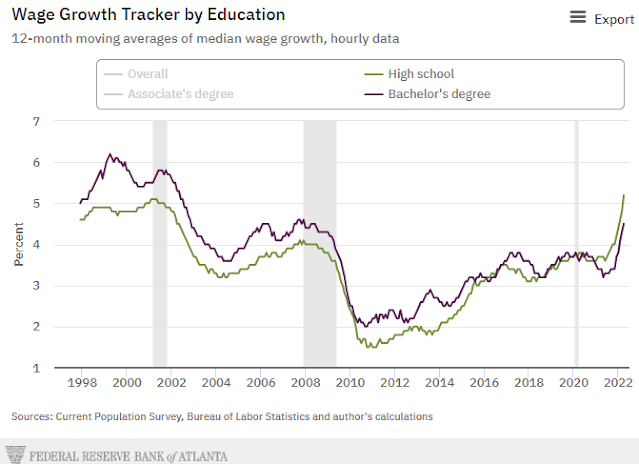 New Deal democrat has been calling for a slower jobs market because real retail sales leads employment. While that hasn’t shown up in the monthly Non-Farm Payroll report just yet, initial jobless claims are bottoming, indicating a cooling jobs market.

Even though the transitory word has been erased from the Fed’s vocabulary, inflation, as measured by core PCE, is cooling. Both core PCE and the trimmed-mean PCE have been decelerating in the past three months and annual PCE should fall as large readings drop off in the next three months. All else being equal, core PCE is currently running at an annualized rate of 3.0-3.5%, which is below the Fed’s SEP projections of 4.1% by December 2022.

Monetary policy is doing its job of tightening financial conditions, though readings are not at past crisis high levels. Various Fed speakers have made it clear that there is no Fed Put in the stock market. What the Fed cares about is the proper functioning of credit markets and excessive Wall Street turbulence doesn’t leak over to Main Street.

As well, inflation expectations have improved, which makes the Fed’s job easier. 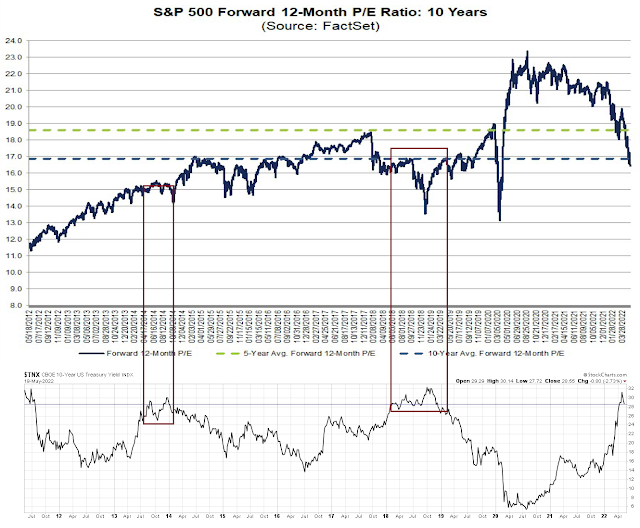 In effect, the market is discounting a soft landing, which is consistent with Jurrien Timmer‘s choppy market scenario of 1994, 2015-16, and 2018. That’s the rosy scenario. 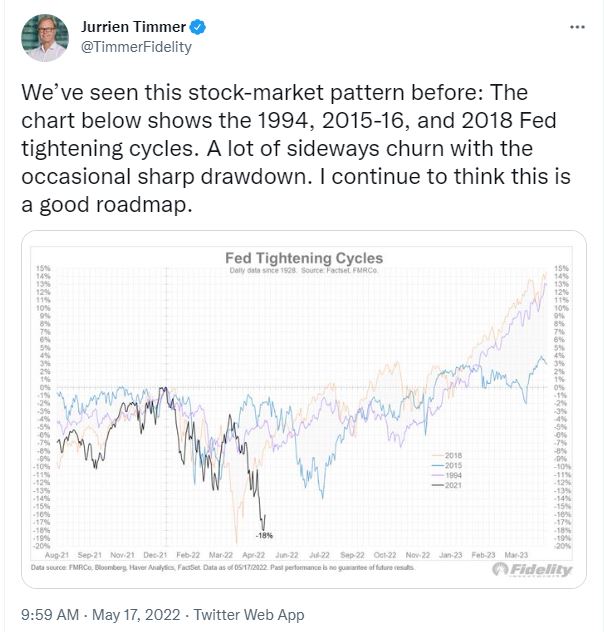 Here is the ominous scenario. The Misery Index, which is the sum of CPI and unemployment rate, is rising in the US and Europe. 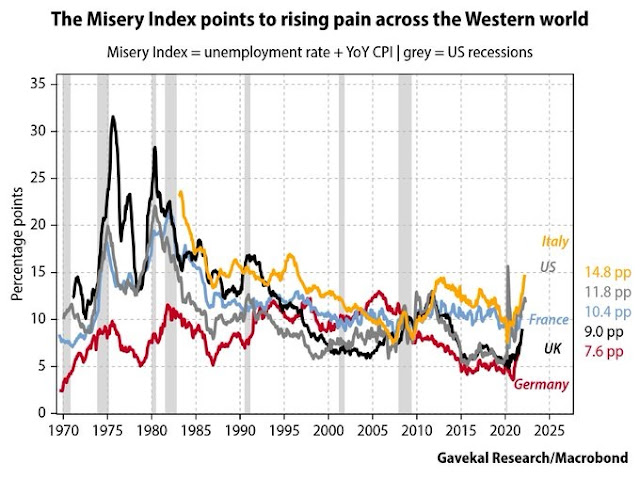 Eurozone consumer confidence is at levels consistent with recession sin the past. 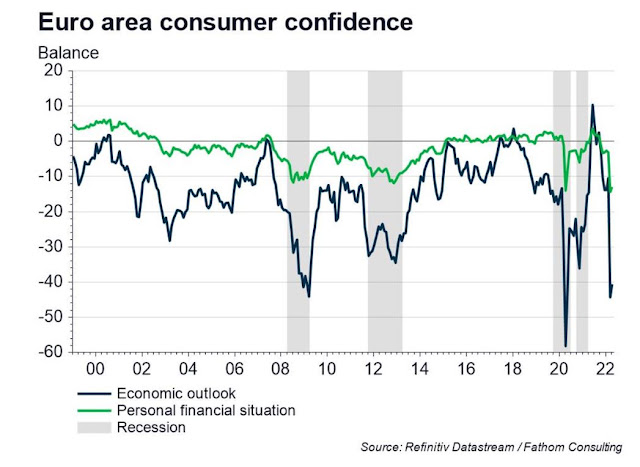 The European economy will further be pressured by the additional imposition of sanctions on Russia. In addition, food shortages will become an additional source of global instability as summer progresses. The Russia-Ukraine war has closed Ukrainian grain exports through the Black Sea. In Asia, China’s wheat crop is expected to be very poor because of a delayed planting and the heat wave in India has sapped grain production. Moreover, Europe is expected to experience a dry summer and create drought-like conditions in wheat growing regions like France. 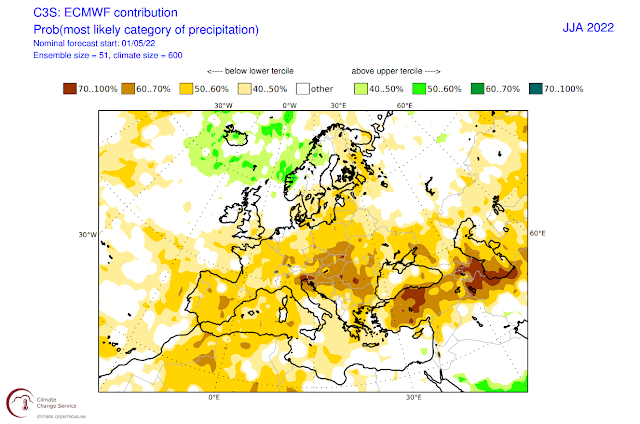 The outlook for North America isn’t much better. The UKMO model calls for dry conditions over most of the cereal growing regions in central and northern US and southern Canada this summer. 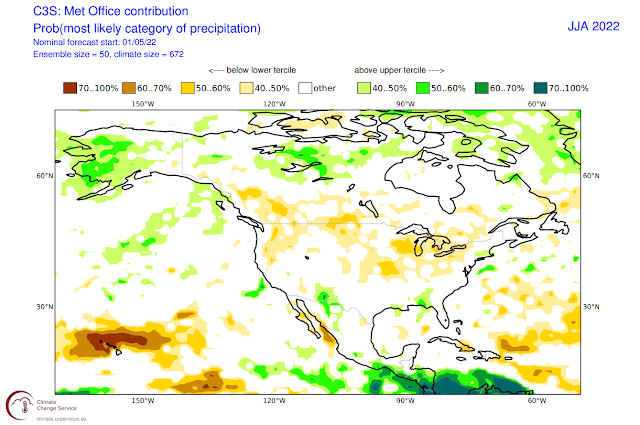 As well, Europe and North America is expected to see a hot summer, which would boost air conditioning usage and natural gas demand and add to inflationary pressures. 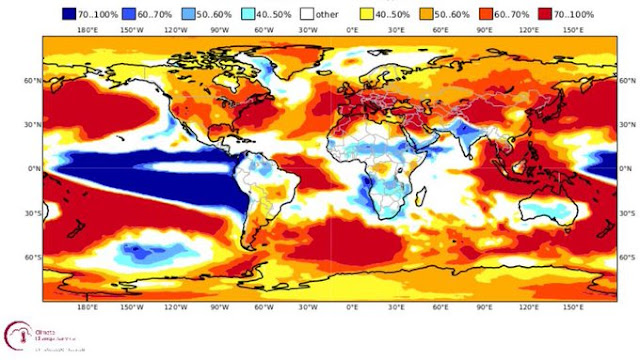 For investors, much will depend on whether the Fed is at peak hawkishness and if the economy falls into recession. The best-case scenario will see inflation peaking out this summer, a cooling of wage pressures, and no further supply chain disruptions. The S&P 500 forward P/E valuation of 16.4 is adequate.
The risk is the economic outlook slows further and Wall Street cuts earnings estimates. While forward 12-month EPS estimates haven’t fallen so far, a recessionary scenario will see analysts cut EPS estimates, which has caused past turbulence in the past. 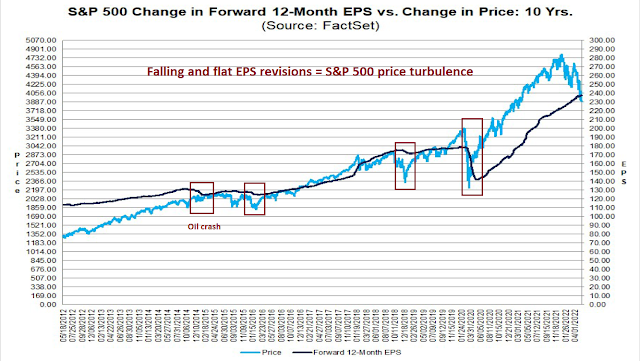 The dismal financial performance of Target and Walmart shows the lingering effects of the COVID Crash and recovery. Both retailers reported that sales were up, but profits were down and inventory rose. The inventory increase is partly a result of the over-ordering effect because of COVID supply chain disruptions. As bottleneck pressures eased, deliveries rose, which boosted inventories and reduced margins.
Ben Carlson pointed out that recession bear markets are far more vicious than non-recessionary bears. If the economy were to sidestep a recession, investors may have seen the worst of the equity decline, but there could be substantially more downside risk if the economy were to collapse into recession. That said, any recession should be relatively mild, as both household and corporate balance sheets are strong. Deep downturns are attributable to the combination of economic weakness and excessive leverage, which is not evident in the US, though it can be found in some non-US economies. So far, the S&P 500 is down -20% in 4.5 months, or about 135 days. 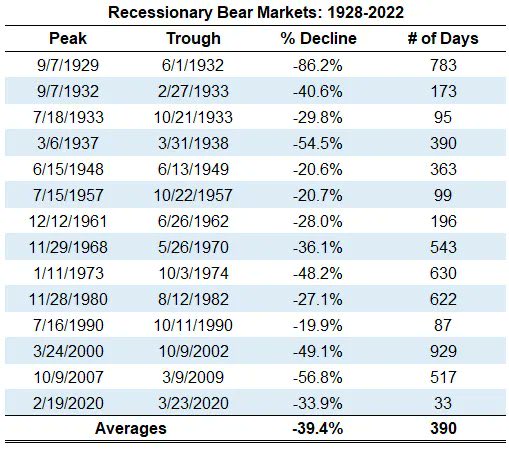 In conclusion, the US equity outlook depends on the economic outlook. P/E multiples are adequate if the economy sidesteps a recession, but the risks are skewed to the downside. If the Fed becomes more hawkish, the economy collapses into recession, or if further supply chain disruptions pressures inflation, downside risk could be considerably higher.