A 2022 inflation tantrum investing roadmap – Humble Student of the Markets

In the wake of the hot January CPI print, I have had a number of discussions with readers about the most advantageous way of positioning an equity portfolio in a rising rate environment. The most obvious strategy is to use an allocation similar to the Rising Rates ETF (EQRR) is to tilt towards value and cyclical stocks. 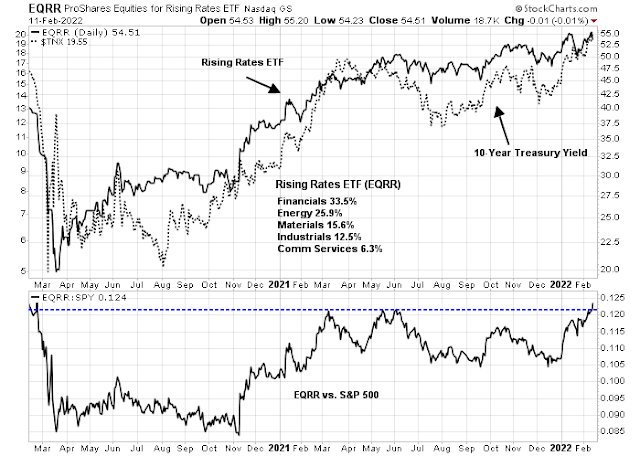 Beneath the surface, however, such an approach carries considerable risks owing to growing negative divergences. Instead, I present a framework for managing the inflation tantrum of 2022.

The main investor concern today is the prospect of higher interest rates. Not only has the Fed revealed a tightening bias, but also the European Central Bank recently made a similar pivot. The economy is on fire and there is plenty of room for the Fed to raise rates. Job postings are strong and the data underscores Jerome Powell’s comment during the January FOMC press conference about a tight labor market.

I think there’s quite a bit of room to raise interest rates without threatening the labor market. This is, by so many measures, a historically tight labor market. Record levels of job openings, of quits. Wages are moving up at the highest pace they have in decades. If you look at surveys of workers, they find jobs plentiful. Look at surveys of companies—they find workers scarce. And all of those readings are at levels, really, that we haven’t seen in a long time—and, in some cases, ever. So this is a very, very strong labor market, and my strong sense is that we can—we can—we can move rates up without,
without having to, you know, severely undermine it. 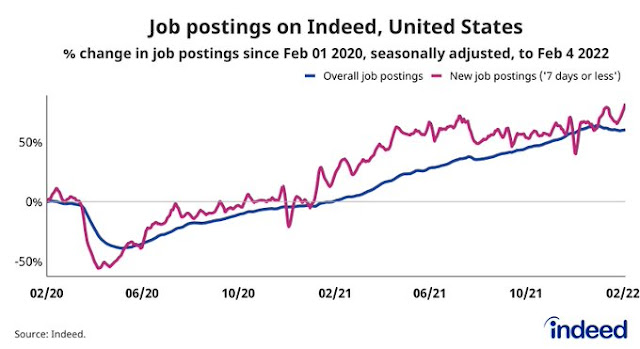 Moreover, consumers are spending again. These are the signs of a robust recovery that allows the Fed to tighten without worrying about tanking the economy. 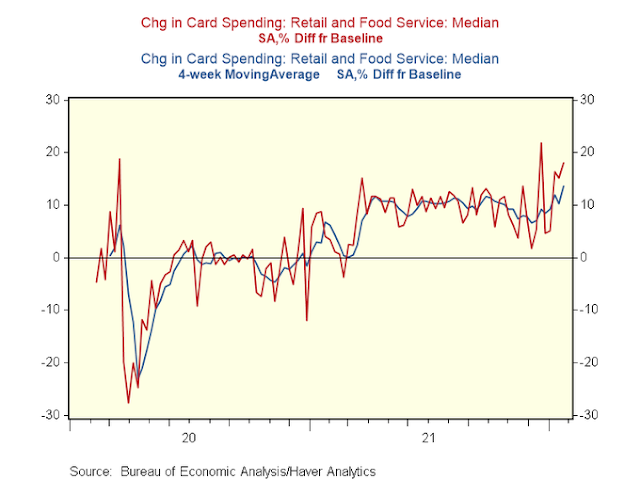 While concerns over inflation and monetary policy are very valid today, there is no need to panic. Hockey legend Wayne Gretzky famously said that he skates to where the puck is going to be, not where it’s been. Here is where I believe the puck is headed.

How to position today

The most obvious way to address current market worries is to position for rising inflation and rising rates. The main overweight positions in EQRR are value and cyclical sectors. But a more detailed analysis of the relative performance of value sectors reveals a number of shortcomings to this approach. 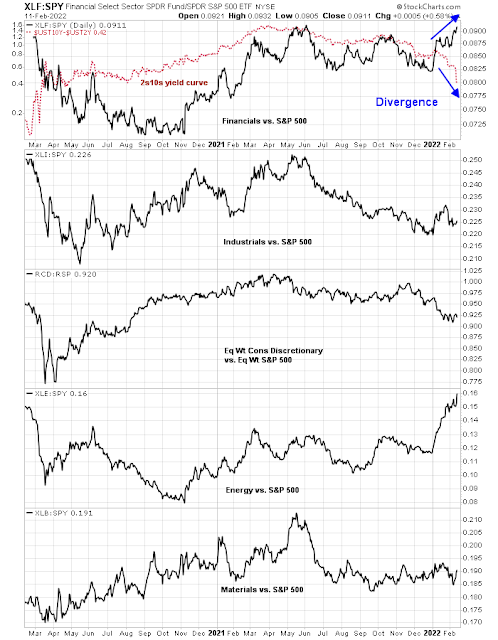 In short, exposure to value sectors carries considerable risk. Investors are betting that the relationship between the yield curve and financials has decoupled. As well, energy prices will remain elevated or a Ukrainian war will break out.
A better way to position equity portfolios in the current environment is overexposures to defensive sectors and high-quality stocks. Three of the four defensive sectors have been in relative uptrends, which began in December and before the onset of the latest market pullback. 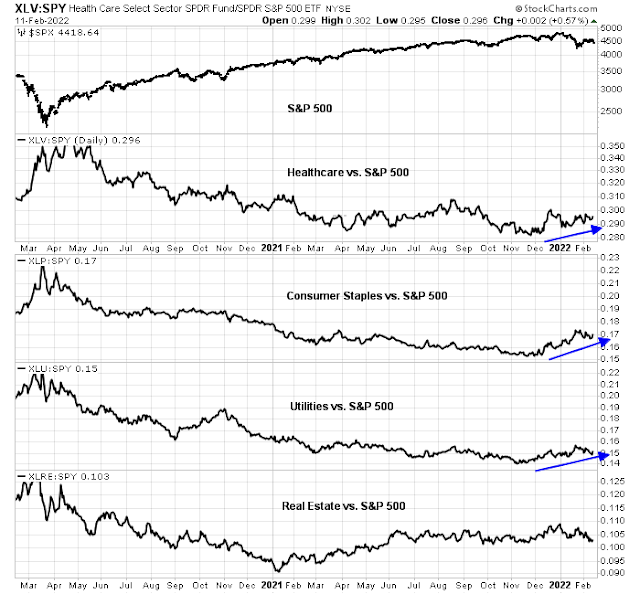 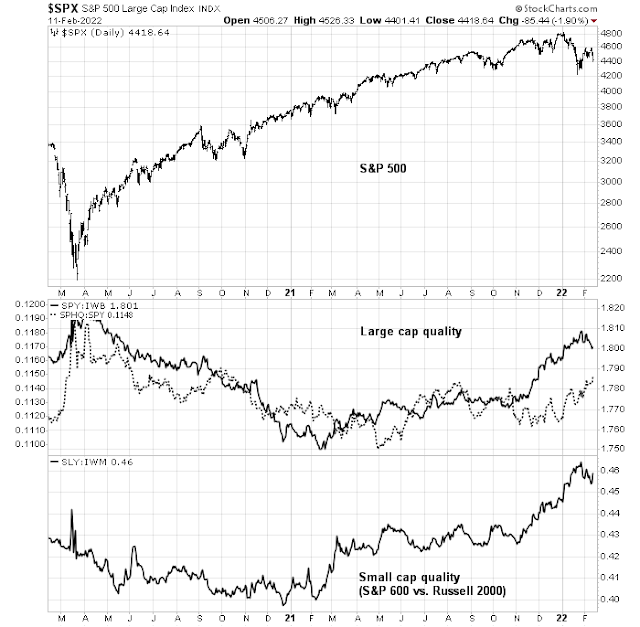 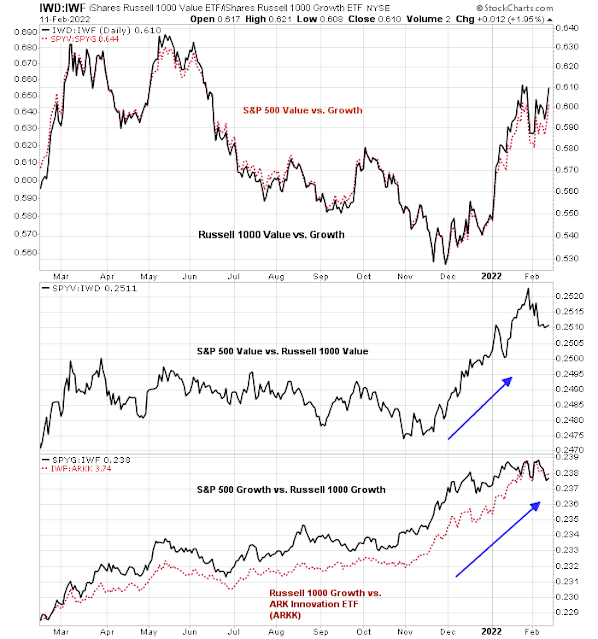 In the wake of the latest hot CPI report, Fed Funds futures are discounting a half-point rate hike in March, five rate hikes in 2022 for a total of 1.5%. These expectations go beyond St. Louis Fed President James Bullard’s call for a full-point hike by the July FOMC meeting. 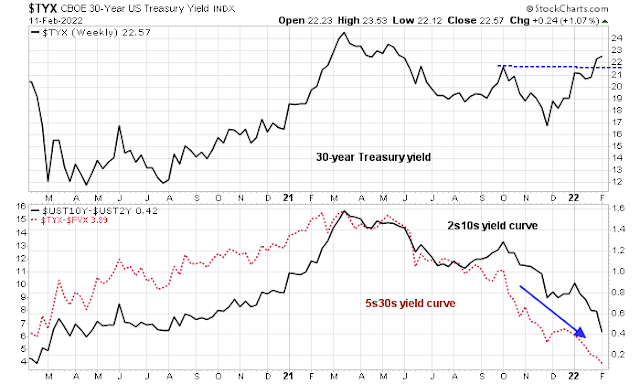 Someday soon, long rates will stop rising and begin to decline. The transition will be difficult to time precisely, but that should happen as the market prices in a Fed policy error and the rising risk of a hard landing. Historically, the 10-year Treasury yield has been roughly correlated with the Economic Surprise Index (ESI), which has been falling. As the Fed tightens and ESI declines further, indicating a weakening economy, bond yield should close the gap and begin to fall. 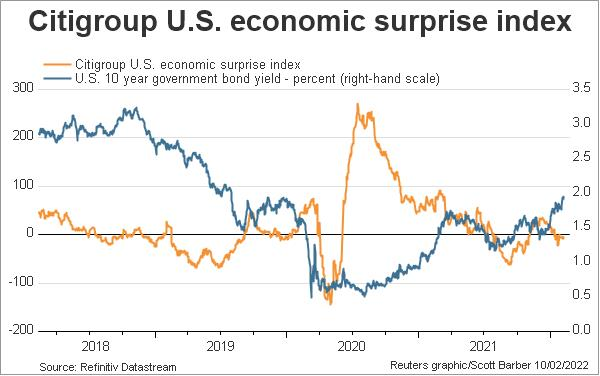 Historically, the relative performance of large-cap growth stocks, as measured by the NASDAQ 100, is inversely correlated to the 10-year Treasury yield. Falling long rates will see market leadership rotate from defensive sectors to growth stocks.

The next phase of market leadership can be described as the recovery phase. As the economy slows and inflationary pressures ease, the Fed will shift to a more accommodative monetary policy. That will be the signal for investors to rotate to value and cyclical stocks. For the time being, these industries are mostly weak to trading sideways relative to the S&P 500, with the exception of oil and gas stocks because of geopolitical tensions. 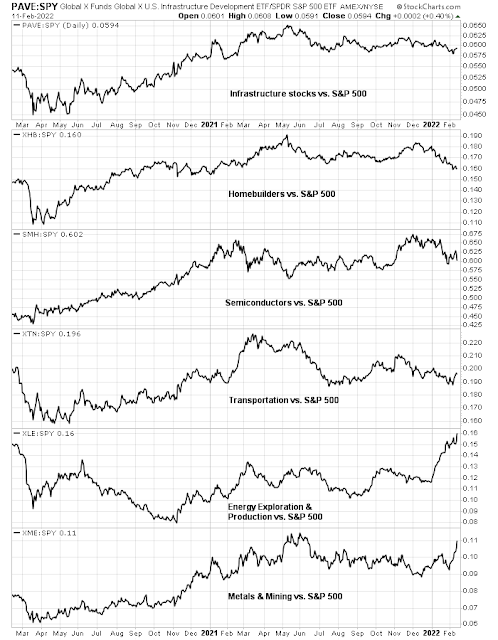 While it’s difficult to precisely forecast the turning points, investors should begin to overweight large-cap growth when 10 and 30 Treasury yields start to decline, which I expect will happen during Q1 or Q2. The recovery phase should begin when inflationary pressures begin to roll over. 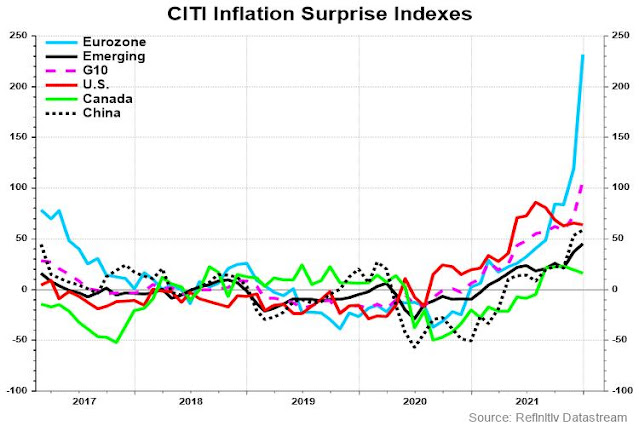 Much of the inflation pressure can be attributed to shortages from supply chain bottlenecks. A recent snapshot of 28 exchanged-traded commodities shows that almost 20 of them are in backwardation, where the front month price is higher than the second month. Backwardation is an indication of a short-term shortage but history shows that such spikes don’t last very long. 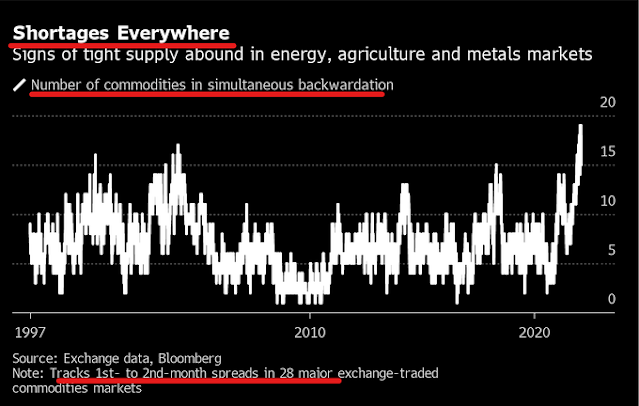 Here is another sign that the inflection point is just around the corner. While the 5s30s nominal yield curve is flattening (red line), the 5s30s breakeven yield curve has already inverted (blue line). Even though nominal headline CPI is 7.5%, long-term inflation expectations are falling. Don’t be surprised if the Fed pivots back to a more accommodative monetary policy in H2 2022 as inflationary expectations remain well-anchored.

In conclusion, the current market environment is tricky to navigate and investors will be faced with considerable volatility in 2022. As it’s difficult to precisely time turning points, I suggest investors adopt the following positioning for their portfolios today.