Welcome to the coming global recession. We can debate all day about the global growth outlook, but consider this: Global Manufacturing PMI has fallen to 48.5, indicating contraction. It’s the first negative reading since the COVID Crash of 2020. 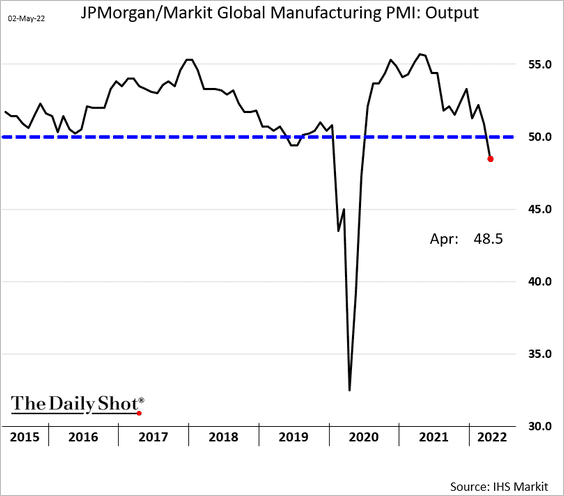 The signs of deceleration have been confirmed by the G10 Economic Surprise Index, which measures whether economic reports are beating or missing expectations. 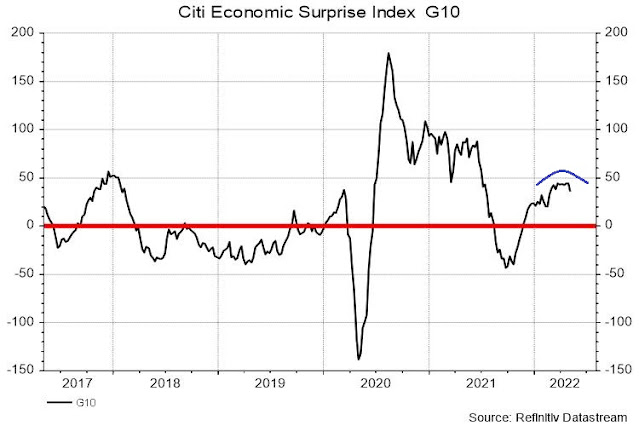 Even in a recession, there is opportunity for equity investors. This week, I analyze the economic and equity outlooks for the three major trading blocs, the US, Europe, and Asia.
To make a long story short, I conclude that a survey of the world economic outlook shows the increased risk of a global recession. An analysis of the global regions indicates the US is no longer a safe haven in downturns. Relative valuations of non-US markets have converged and the best opportunity is appearing in non-German eurozone. Asia may be constructive but it is subject to China lockdown risk and possible fallout from India’s heatwave.

Let’s begin with global equity performance. The relative performance of the major regions relative to the MSCI All-Country World Index (ACWI) shows that US outperformance has stalled and all of the other regions are beginning to catch some bids. Europe is recovering after the Russian invasion of Ukraine. Japan is trying to bottom. The emerging markets are all trying to bottom. From a valuation perspective, the US stands out in exhibiting a premium forward P/E ratio. The forward P/Es of all of the other major regions are all converging to a narrow range. 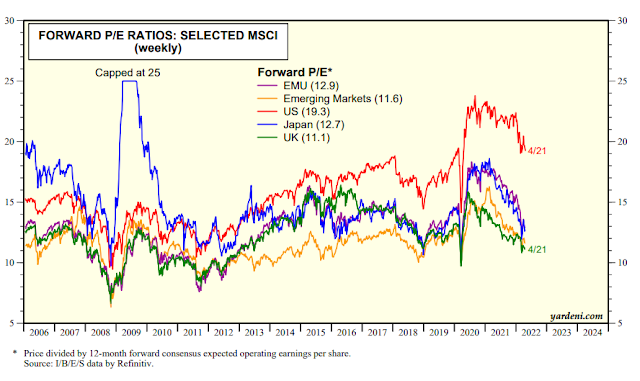 Commodity prices also offer a cautionary message. While most headline commodity indices are strong, their strength can be attributable to the heavy weighting in energy, which has risen because of the Russia-Ukraine war. Equal-weighted commodity indices have been trading sideways and they are testing their 50 dma. Just as disturbing is the behavior of the cyclically sensitive copper/gold and more broadly based base metals/gold ratios, which have been falling. 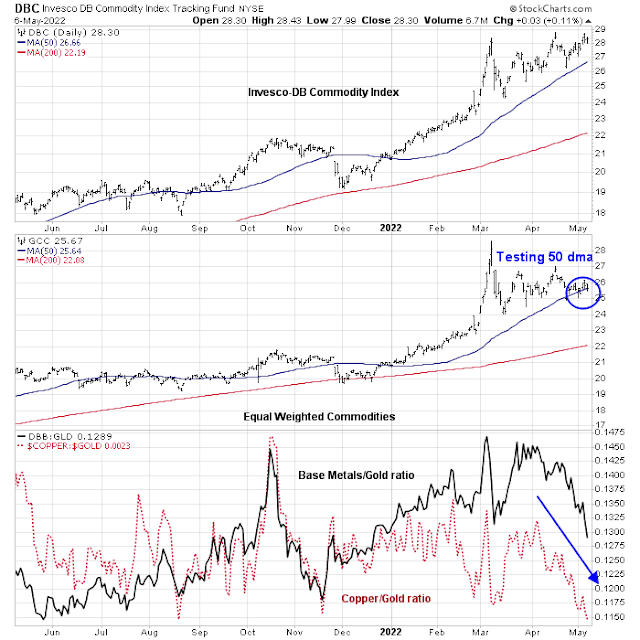 Here’s what this all means.

The major reason US equities were trading at a premium P/E valuation is their growth characteristics. The FANG+ stocks are large-cap dominant companies with strong competitive positions and cash flows. When the global growth outlook faltered as the COVID pandemic ripped through the world, investors piled into US equities as a safe haven. According to the BoA Global Fund Manager Survey, the US is the region with the greatest overweight position. 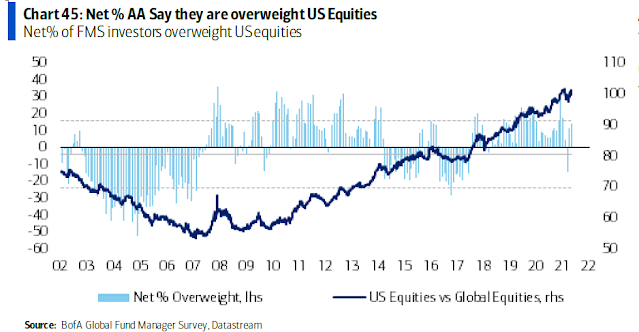 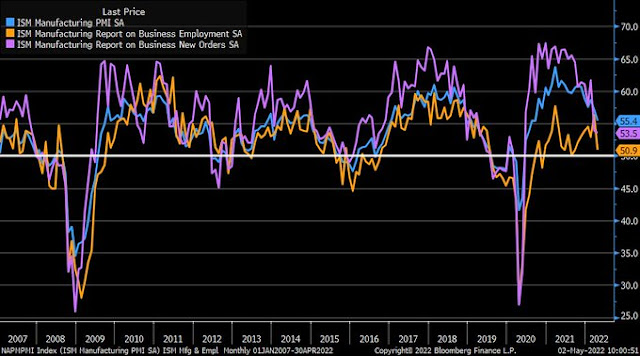 There was deterioration across all three timeframes this week. The coincident nowcast is only weakly positive, the short term forecast is neutral, and the long leading forecast, for this first time since before the pandemic, has turned negative.
It is important to emphasize that while the high frequency indicators give early warning of changes, they are also somewhat noisy. Some of the negative trends might reverse (e.g., financial conditions, which showed tightening for the first time), and some positive trends (like corporate earnings beats) may amplify…
To sum up: the outlook for the rest of 2022 remains a weak positive economy, while for the first time, the outlook for 2023 beginning in Q2 may include a recession. From here on, we look to see if the negativity persists in the long leading indicators, and begins to spread into the short leading indicators. 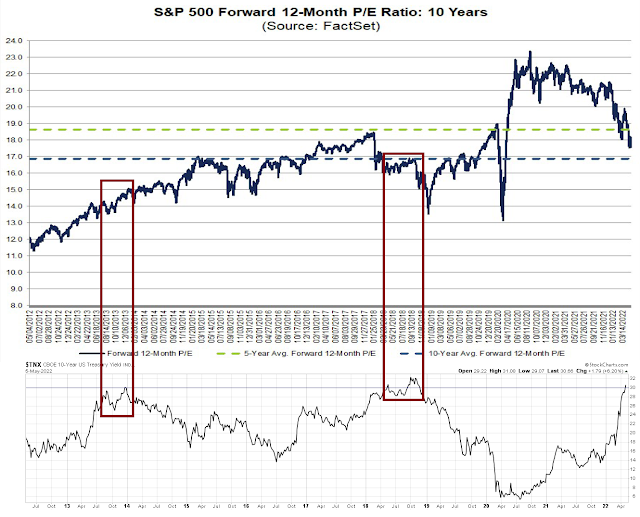 The S&P 500 has even more downside risk than -20%. The market is in the part of the cycle in which estimate revisions are has begun to decelerate and P/E ratios are undergoing compression. In the past, the S&P 500 has struggled when EPS revisions were flat to down. 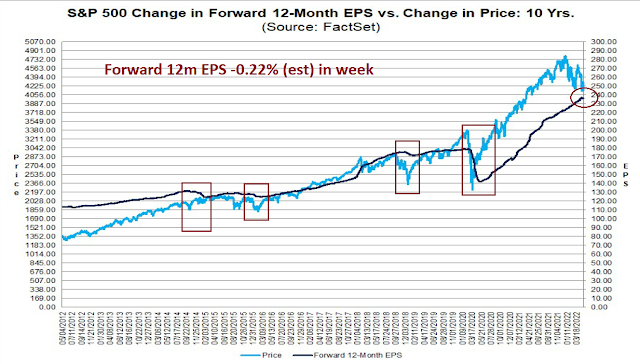 This is the first week of decline in forward 12-month EPS estimates. While it could be just a data blip, a detailed analysis of the weekly quarterly EPS revisions shows a disturbing trend. Q1 2022 EPS estimates were revised upwards, mostly because 79% of reporting S&P 500 companies have beat estimates. However, the Street substantially cut estimates for the next three quarters and Q2 2023. The only exception was a minor upward revision for Q1 2023. 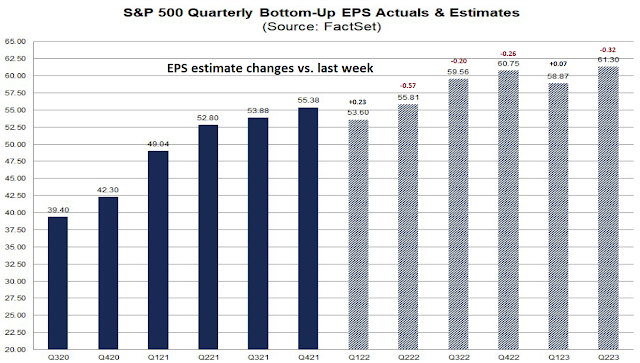 Not such a safe haven anymore.

Looking across the Pacific to Asia, the relative performance of Asian markets can be characterized as constructive. All of the major Asian regional markets are in the process of making relative bottoms. India is in a minor relative uptrend. The apparent strength could be a mirage. That’s because of the unknown effects of China’s spreading lockdowns because of its zero-COVID policy. April’s manufacturing PMI has nosedived. 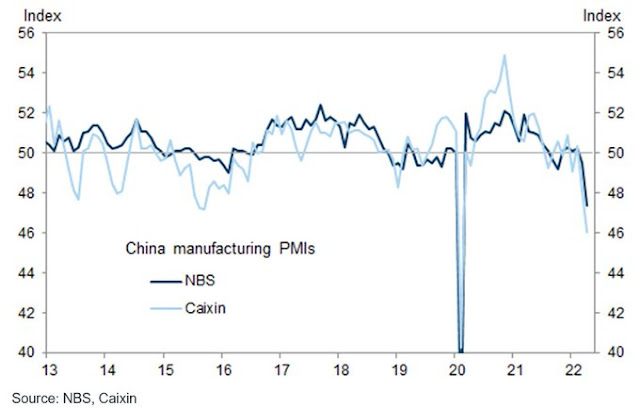 As China is a major global manufacturing hub, a Chinese slowdown will cause a renewal of supply chain bottlenecks around the world. The WSJ reported that the average time to receive production materials rose to 100 days in April because of the lockdowns.

The Institute for Supply Management said its index of U.S. manufacturing activity in April hit its lowest level since July 2020, and the average time to receive production materials increased to 100 days in April, its longest span ever. In the survey, 15% of panelists expressed concern about the ability of partners in Asia to reliably make deliveries in the summer months, up from 5% in March.

If you thought manufacturing PMI was weak, the weakness in China’s services PMI illustrates the damage of the lockdowns are doing to the economy. 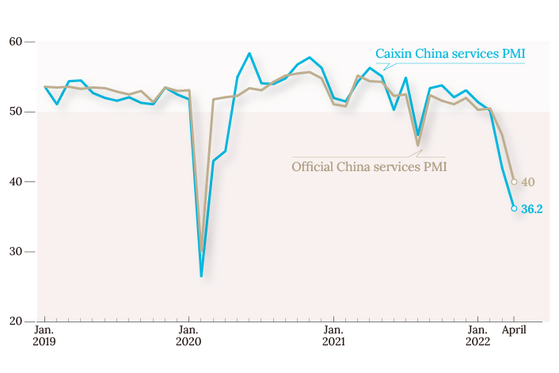 There is no sugarcoating the economic situation in China. Lockdowns to fight Covid-19 whose effects aren’t yet reflected in official data are already causing “severe pressure,” according to a survey of more than 1,000 firms conducted in the last week of April by China Beige Book and released on Monday. Almost a quarter of the companies reported virus outbreaks among employees, up from 20% in March.
Growth in revenue and profits in manufacturing, retail, and services already is slowing. Even more troubling: Hiring took its first big hit since the initial Covid outbreak in 2020 as companies took on fewer staff and wages dropped. Companies also demonstrated little appetite for credit. Both borrowing and bond sales dropped, according to the China Beige Book, a troubling sign for investors waiting for easier access to credit to help stem the slowdown.

As well, OPEC indicated that China is facing the biggest demand shock since early 2020 because of its lockdowns.

Over in India, Bloomberg reported that the country is experiencing the worst heatwave in 122 years. This has resulted in power cuts owing to a coal shortage and high coal and oil prices have pressured inflation. The heatwave has also damaged crops and added to the global food shortage as India is considering restricting wheat exports.

Europe: First in, first out?

Turning to Europe, the economic outlook looks like a mess, but European equities present opportunities because the region may be the first to undergo a recession, and it could the first one out of one.

The BOE raise rates by a quarter-point last week and presented a dire forecast for the UK economy. It sees the second largest drop in living standards since 1964, with inflation peaking at 10.2% in Q4. Unemployment will rise and GDP growth will fall -1% by Q4. While large cap UK stocks are showing some relative strength because of their large energy and mining exposure, small caps, which are more reflective of the British economy, is lagging.

Across the English Channel, the April Eurozone manufacturing PMI is falling, which is not a surprise because of weakened Chinese demand. 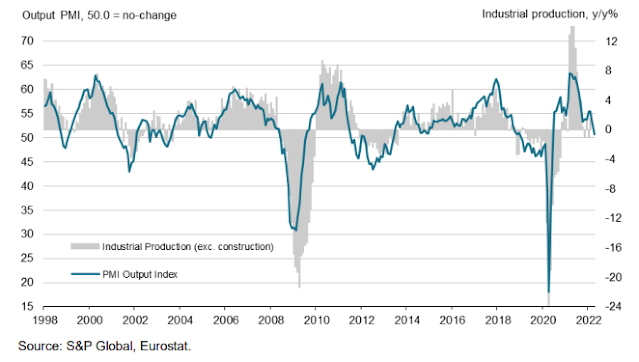 The bright spot was services PMI, which rose “amid falling COVID-19 case numbers and an associated relaxation of health restrictions”. 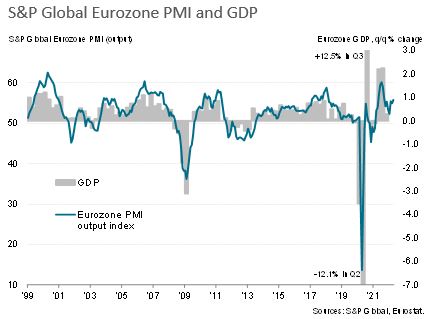 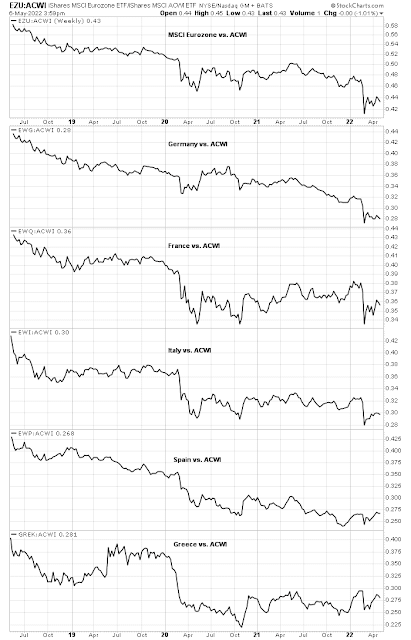 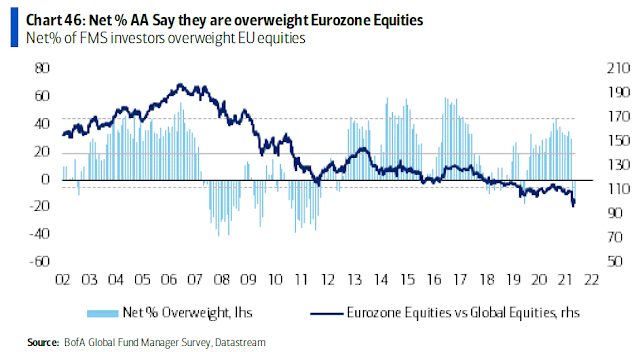 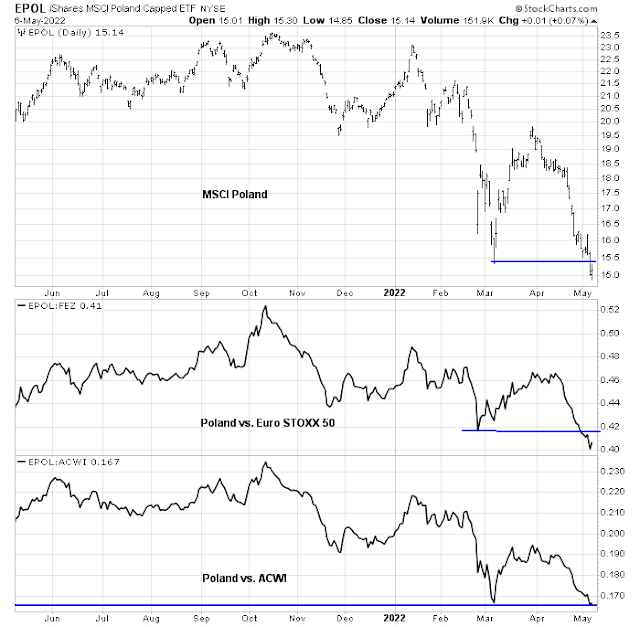 In conclusion, a survey of the world economic outlook shows the increased risk of a global recession. An analysis of the global regions indicates the US is no longer a safe haven in downturns. Relative valuations of non-US markets have converged and the best opportunity is appearing in non-German eurozone. Asia may be constructive but it is subject to China lockdown risk and possible fallout from India’s heatwave.

37 thoughts on “Profit opportunities in the coming global recession”