Waiting for the FOMC – Humble Student of the Markets 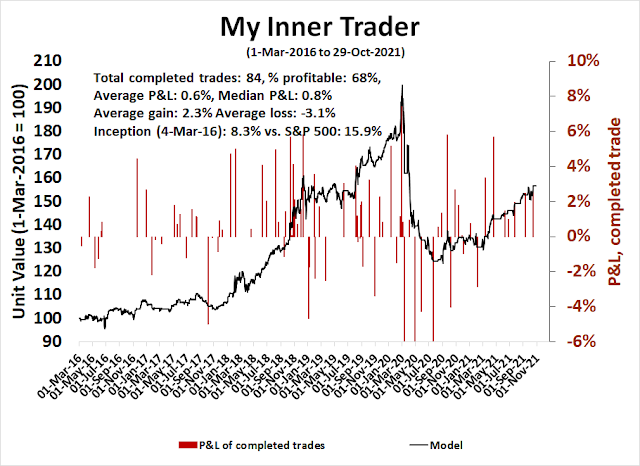 A review of the asset returns on an RRG chart and found a possible inflection point for both equity market leadership and bond prices. As a reminder, I use the Relative Rotation Graphs, or RRG charts, as the primary tool for the analysis of sector and style leadership. As an explanation, RRG charts are a way of depicting the changes in leadership in different groups, such as sectors, countries or regions, or market factors. The charts are organized into four quadrants. The typical group rotation pattern occurs in a clockwise fashion. Leading groups (top right) deteriorate to weakening groups (bottom right), which then rotates to lagging groups (bottom left), which change to improving groups (top left), and finally completes the cycle by improving to leading groups (top right) again. 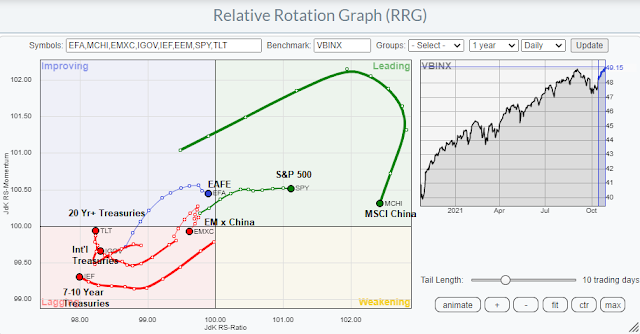 Here are the main takeaways from the analysis of daily asset returns using a 60/40 US stock/bond mix as a benchmark for USD investors.

The accompanying chart of the relative returns of different regions compared to the MSCI All-Country World Index (ACWI) is a snapshot of global market leadership. The S&P 500 is strong and staged a relative upside breakout to all-time highs. The two main regions in the EAFE markets are Europe and Japan. European stocks are going nowhere. Japanese stocks surged in anticipation of a change in political leadership but gave all the gains back afterward. China is the heavyweight in EM and it appears to be trying to make a relative bottom. By contrast, EM xChina is weak. 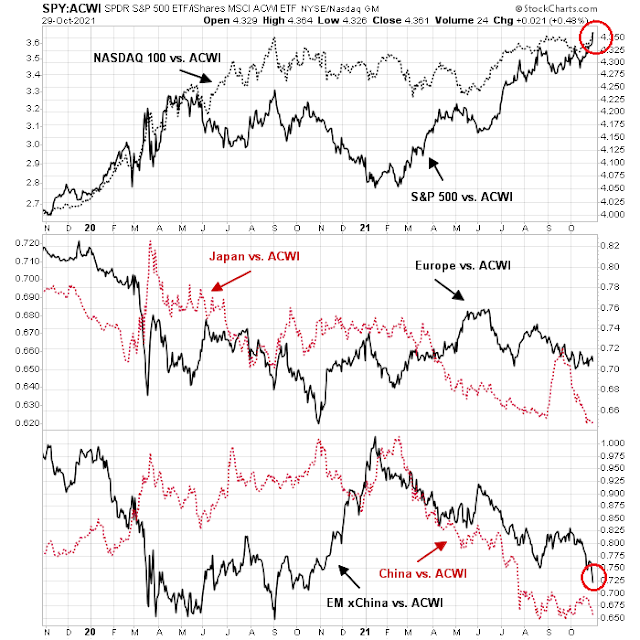 In the US, strong momentum is supportive of further gains and so are sentiment model conditions. All Star Charts found an unusual agreement between AAII and Investors Intelligence sentiment readings have led to further price gains.

Both surveys now show bulls in the 40’s and bears in the 20’s. Our sentiment chart of the week shows that when we’ve seen this degree of agreement between these surveys in the past, stocks have tended to do pretty well. 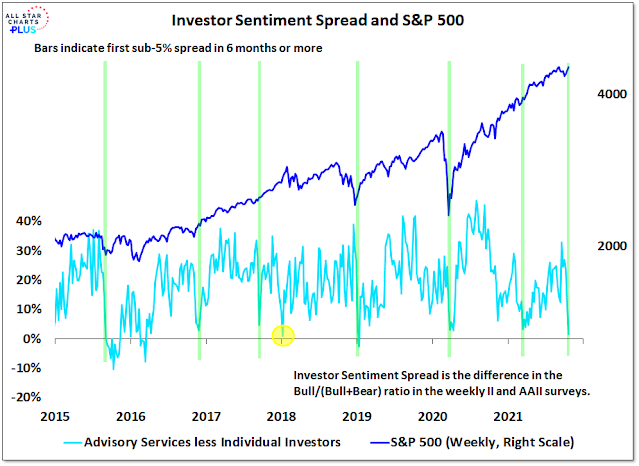 Similarly, SentimenTrader observed that the NAAIM Exposure Index, which measures the sentiment of RIA advisors, has moved to a levered long condition. Similar past episodes have resolved in a bullish manner. 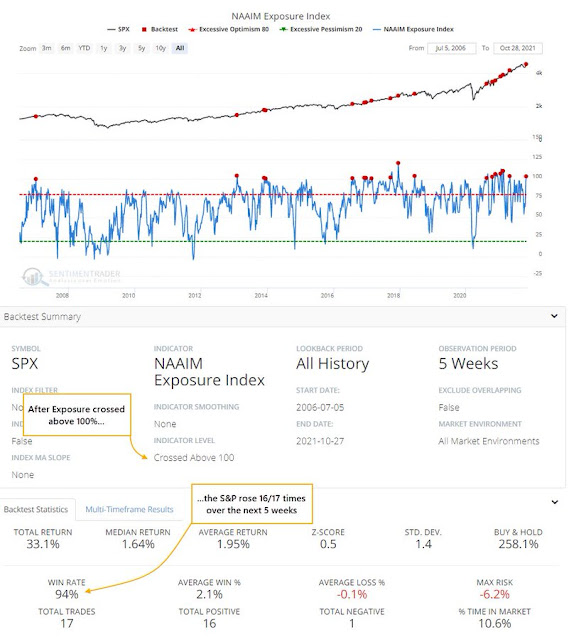 In addition, Q3 earnings season has been strong. Both EPS and sales beat rates are above average and EPS estimate revisions are rising. This is evidence of fundamental momentum that is supportive of more gains. 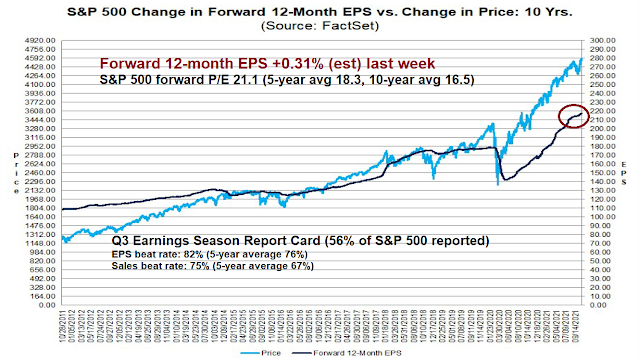 In the short-term, the S&P 500 is in a holding pattern after ending an upper Bollinger Band ride which has resolved with either a sideways consolidation or pullback. More ominously, it is exhibiting a negative 5-day RSI divergence. Nevertheless, I remain intermediate-term bullish on US equities. 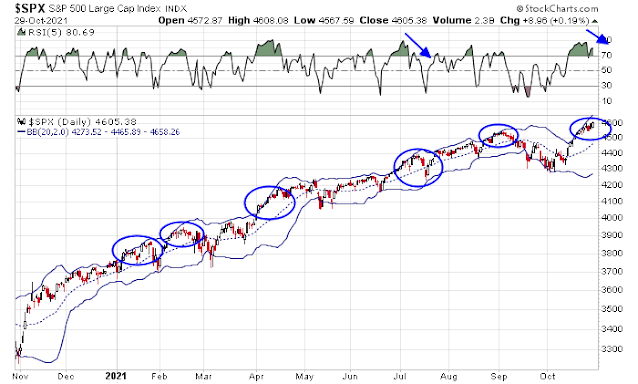 While the outlook for international developed market equities is unexciting, the emerging markets outlook much depends on China. China is the heavyweight in EM indices and foreign investor sentiment has changed from an un-investable to a constructive view. Bloomberg summarized the issues well in an article, “Bulls Return to China’s Markets Just as Risks Start to Multiply”.
On one hand, valuations are becoming more attractive. 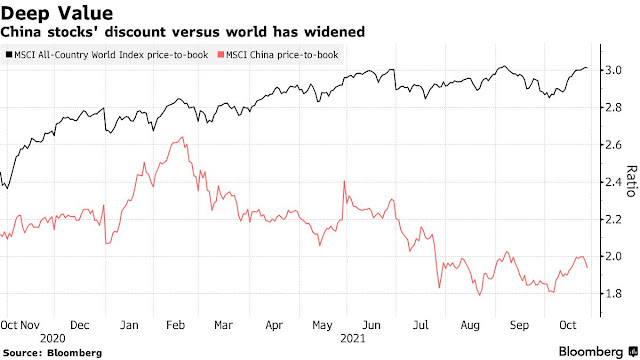 On the other hand, investors face considerable risks.

Unlike the rest of the world, China is sticking with plans to eliminate local transmission of Covid-19, even as it battles with sporadic outbreaks. The economy is showing signs of a further slowdown with car and housing sales dropping this month, and a number of economists have lowered their growth forecasts for this year and next.
China is reluctant to stimulate the economy because of a determination to deleverage the housing market and reduce financial risk. The policy has exacerbated the crisis at Evergrande and other indebted developers, with at least four missing dollar debt payments this month. Distressed property firms, which make up about one-third of China’s record dollar bond defaults this year, face a bigger test in January — when maturities more than double from October, according to Citigroup Inc.

The other emerging market countries offer few exciting opportunities from a technical perspective. Of the top three weights in EM xChina that make up about 60% of the index, Taiwan and South Korea are not showing any leadership qualities. The third, India, is exhibiting a choppy and uncertain uptrend relative to ACWI. 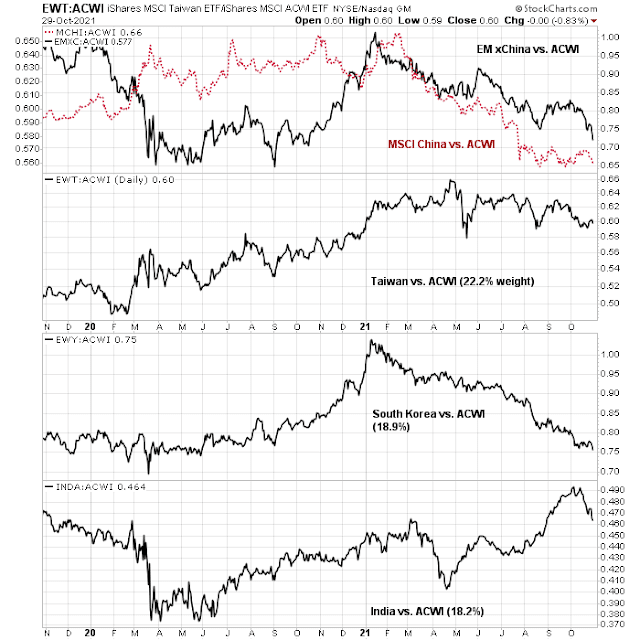 Waiting for the FOMC

The RRG chart highlighted a possible bullish setup for bond prices. First, sentiment is at a bearish extreme. The BoA Global Fund Manager Survey revealed that respondents were at a record underweight position in bonds. 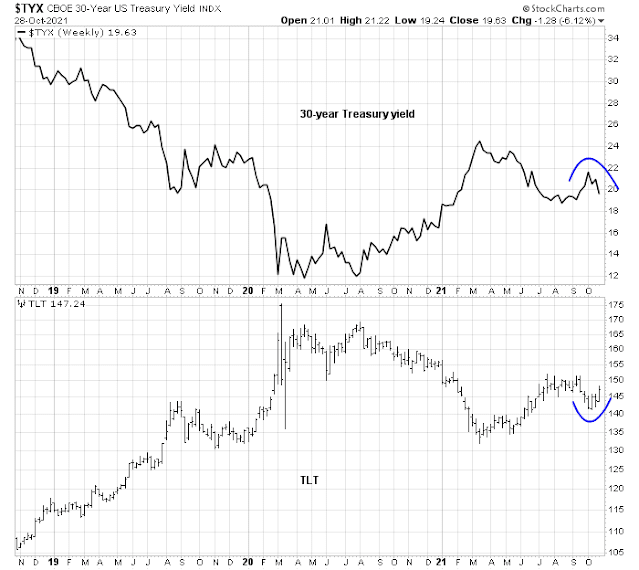 Further declines in yields would be bullish for bond prices, but much depends on the language coming from the Fed in the wake of its November FOMC meeting and subsequent press conference. In the wake of a hawkish surprise from the Bank of Canada last week, the market began to price in an aggressive tightening cycle by global central banks as yield curves around the world flattened. 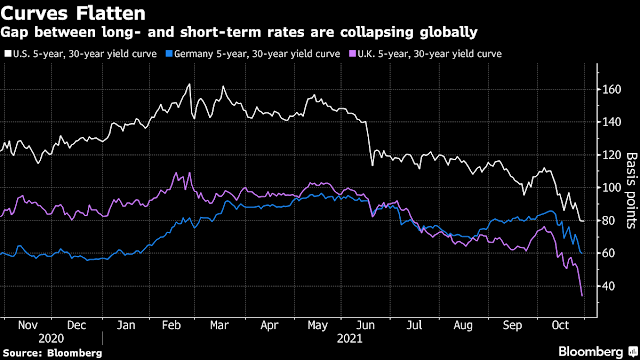 The flattening yield curve has two components. On one hand, rising 2-year yields is a signal that the market expects hawkish pivots from central bankers. On the other hand, falling long bond yields reflect an expectation of slower growth. The market is in effect saying that any early tightening represents a policy mistake and central bankers will have to reverse course and ease policy in the near future.
That’s where the Fed comes in. It has signaled in the past that a QE taper at the November meeting is baked-in and it expects the taper to end in mid-June. The CME’s Fedwatch Tool shows that the market is discounting rate liftoff at the June FOMC meeting, right when the QE taper is expected to be terminated. If that is indeed the scenario, expect language that accelerates the taper schedule so that it ends before June. 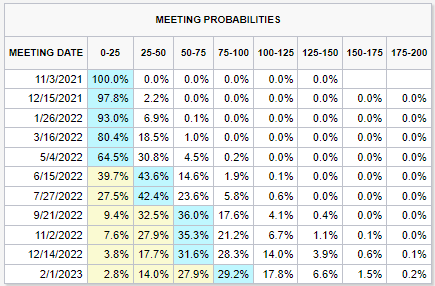 Will policy makers turn hawkish in reaction to market expectations and rising inflation pressures to pull the tightening schedule forward, or will it stay the course, which would be a dovish outcome?
A dovish tone is likely to lead to a steepening yield curve as 2-year yields ease and 10 and 30-year yields rise. In that case, kiss the prospect of a bond market rally goodbye. A hawkish tone would result in a further flattening of the yield curve and a bond market rally.
What will the Fed do? History shows market expectations have been overly hawkish.

The Fed’s tone will also matter to equity market leadership. The value/growth relationship has been correlated to shape of the yield curve. A dovish Fed would be value bullish and a hawkish tone would be growth bullish.

What say you, Jerome Powell?

13 thoughts on “Waiting for the FOMC”