Short-term rates are freaking out. 2-year yields are rising based on the expectation of a tightening bias by global central bankers. 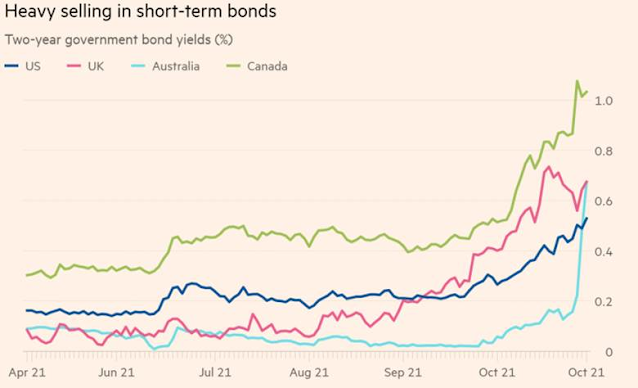 The market should gain greater clarity on central bank intentions soon. Both the Fed and the BoE will announce their interest rate decisions this week and the BLS will report Non-Farm Payroll Friday.

How hawkish could be Fed turn? Since the market has already discounted an aggressive policy, what does it need to beat expectations?
Let’s look at the data. Core PCE, which is the Fed’s favorite inflation indicator, came in below expectations as it was flat in September compared to August. Most of the inflation was attributable to durable goods PCE. The strength in durables PCE is mainly attributable to supply chain bottlenecks, illustrated by the inverse correlation between it and the plunging domestic auto inventories (black line, right scale). This is what transitory inflation pressures look like. Falling auto inventory is a symptom of the semiconductor shortage.

How transitory? The CNBC interview with Intel CEO Pat Gelsinger provides a window on supply chain pressures. The shortages are peaking now and they should start to ease, but don’t expect normalization until 2023.

Gelsinger said that…he didn’t expect the semiconductor shortage to end until 2023.
“We’re in the worst of it now, every quarter next year we’ll get incrementally better, but they’re not going to have supply-demand balance until 2023,” Gelsinger said.

As a window on commodity inflation, the IEA forecasts the oil market will return to surplus by H2 2022. 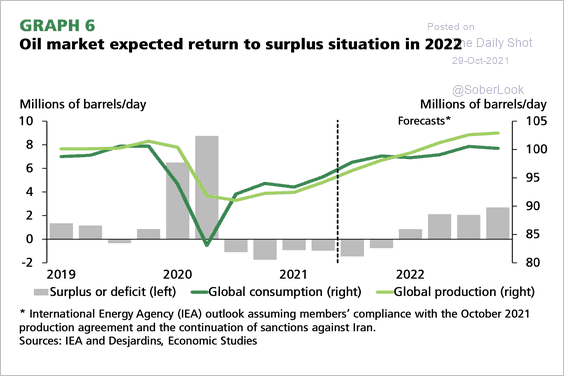 A breakdown of ECI by industry shows that most of the gains were in low-paid groups such as retail and leisure and hospitality. This is consistent with the Fed’s stated objective to reduce inequality.

Will these indications of transitory inflation and falling inequality be enough for the Fed to stay the course, or pull forward its projected rate liftoff from late 2022 to the market’s expectation of June 2022, and a second rate hike in September? Don’t count on it. A recent Bloomberg survey of economist shows that they expect inflation to be under control by 2023. 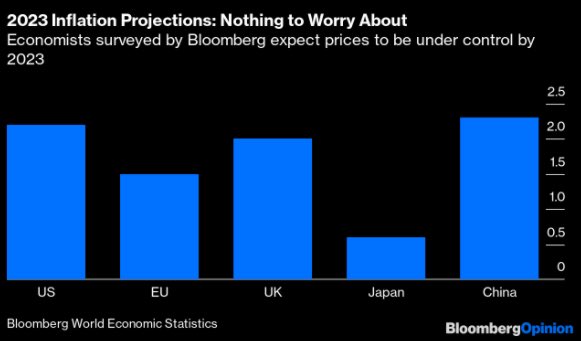 To settle the debate, Ed Yardeni hit the nail on the head when he said that the single variable affecting the Fed’s decision process is productivity growth.

Productivity growth is the key swing variable” in determining whether this decade looks like the Roaring 1920s or the inflationary 1970s, says Ed Yardeni, president of Yardeni Research. “If productivity growth doesn’t improve as we expect, then upward wage pressures would cause a wage-price spiral similar to what happened during the 1970s.”

As I pointed out on the weekend, the global economy is experiencing tight labor markets (see Making sense of the Great Resignation). Analysis from the BCG Henderson Institute found that tight labor markets tend to spur productivity growth as companies substitute technology and capital for labor. This should usher in an economic boom in the coming years. 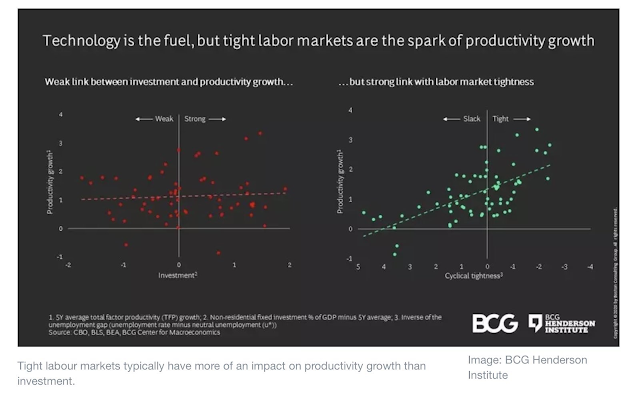 The market has become overly hawkish. The odds are the Fed will disappoint with a dovish tone. Keep an eye on Friday’s NFP report. Unless the jobs report comes in very strong, or if the gains in average hourly earnings exceed expectations, the doves should continue to have the upper hand. 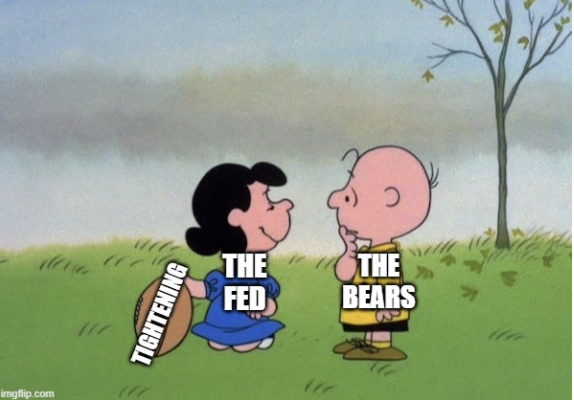