It’s been over a year since the stock market bottom at the height of the Pandemic Panic. The market consensus has evolved from an early cycle recovery to a mid-cycle expansion, as evidenced by the BoA Global Fund Manager Survey. 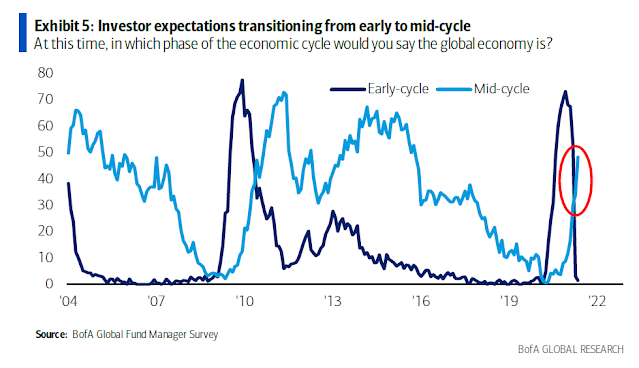 What that means for investors? Here are the key questions we focus on:

What does a mid-cycle expansion mean? We can look at it through several lenses.
From a momentum perspective, the G10 Economic Surprise Index, which measures whether economic releases are beating or missing expectations, is decelerating after a V-shaped recovery. However, ESI readings are still positive, indicating there are more positive than negative surprises. 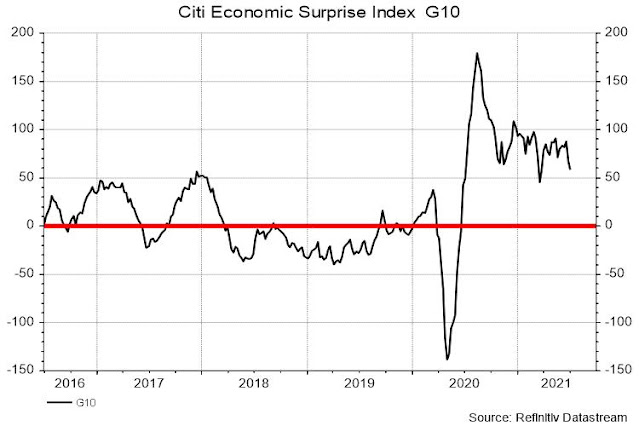 In the US, ESI is following a similar pattern, though it is nearing the zero line indicating a rough balance between positive and negative surprises. 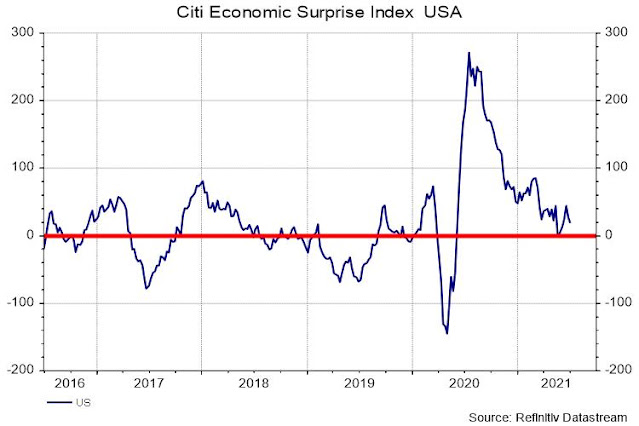 From a policy perspective, the need for emergency battlefield surgery is diminishing. The Federal Reserve is starting to contemplate the tapering of its quantitative easing programs as an early prelude to rate hikes. Callum Thomas has highlighted rate hikes by a number of small emerging and frontier market central banks. While these policy initiatives are insignificant when viewed in isolation, Thomas makes the point that changes in EM economies can be sensitive barometers of changes in the global cycle. Rate hikes have been observed in Mozambique, Tajikistan, Zambia, Zimbabwe, Kyrgyzstan, Ukraine, Brazil, Georgia, Turkey, Russia, and Belarus. Even the Bank of Canada has announced a taper of its QE program.
For equity investors, it’s far too early to turn overly cautious. As I have pointed out before, past episodes of Fed tapers have resolved in either choppy or advancing stock prices. 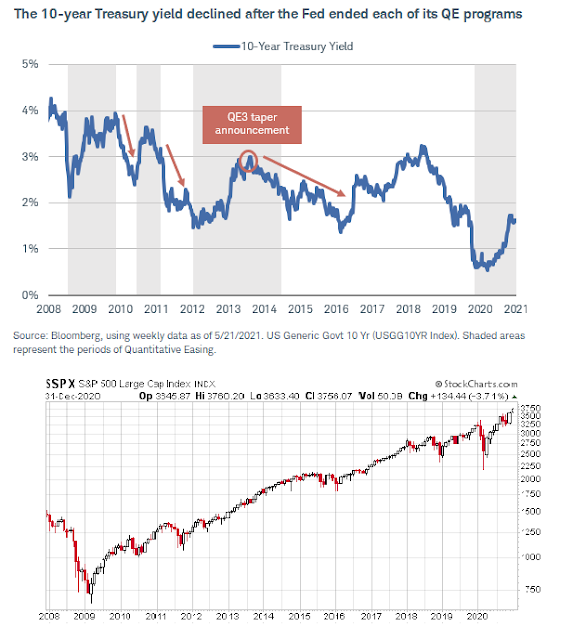 Just as it’s time to start withdrawing monetary accommodation, expect fiscal support to also diminish over the coming quarters. The Hutchins Center on Fiscal and Monetary Policy forecasts that the recent record of fiscal thrust will turn into fiscal drag. Similarly, the historical evidence on fiscal drag episodes has not been equity bearish either. 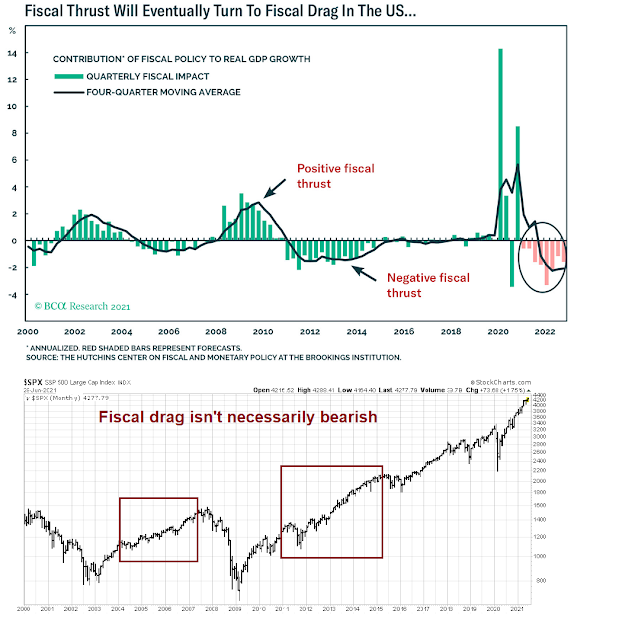 Jurrien Timmer of Fidelity Investments had a different viewpoint. He characterizes a mid-cycle expansion as a period where the driver of equity returns is earnings gains rather than P/E multiple expansion: ” The market is transitioning from its valuation-driven early-cycle phase to an earnings-driven mid-cycle phase, so while it remains in an uptrend—with higher highs & higher lows—there hasn’t been much progress since April, a normal part of this adjustment.” 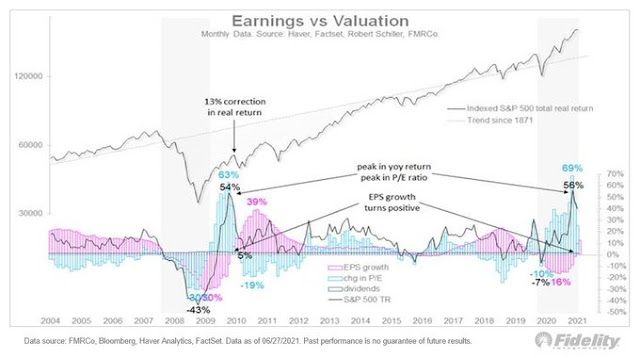 So far, forward EPS estimate growth is still strong. This should be supportive of further equity price gains. 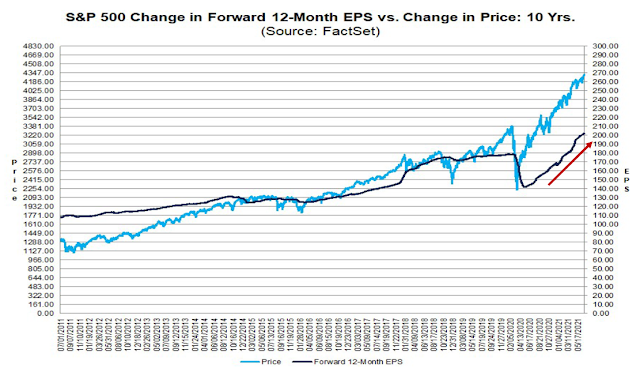 Even though it’s far too early to turn bearish on stocks, there are a number of subtle signals beneath the surface that investors should monitor.

Now that I have made the case that the equity outlooks is benign, the key questions for investors are:
From a global macro perspective, the key indicators to watch are the 10-year Treasury yield and the USD. If they move together, it will be an important clue as to the direction of the global economy. So far, they are behaving in a fashion consistent with past global recoveries. Yields have rebounded but progress has stalled, and the USD is volatile but range-bound. 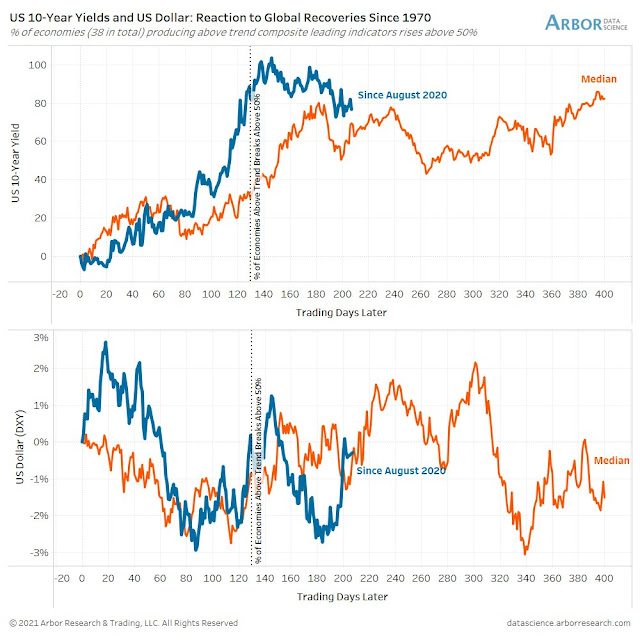 What happens next? The bearish scenario, which is becoming the consensus one, would see a stalling in economic growth and momentum, causing the Fed to take a more dovish tone, Treasury yields to pull back, the yield curve flattens, put upward pressure on the USD, which would be negative for commodity prices. Growth stocks would regain market leadership as investors pile into growth stocks when growth becomes scarcer, and value stocks lag owing to their high cyclical exposure. Currency strategist Marc Chandler highlighted the downside risks:

The coming fiscal cliff and excesses spurred by the rapid growth, coupled with the doubling of the price of oil since the early last November before the vaccine was announced, seems to point to the risk of an economic downturn in late 2022 or early 2023.  This may not be the baseline view, but it is powerful and dangerous even as a risk scenario.  To the extent that the economy impacts voters’ preferences, how the Fed manages the post-covid economy could influence next year’s mid-term elections and the general election in 2024.

On the other hand, the current environment could also be similar to the 2003-04 period. The stock market had been rallying for about a year. The USD had been falling but started to reverse its losses. Upward progress in the 10-year Treasury yield had stalled. The major difference is the value/growth relationship. Value stocks were already four years into a steep recovery, while the current episode has only seen the value recovery begin a year ago. History doesn’t fully repeat itself, but rhymes.
The economic recovery continued after 2003-04. Even as the value/growth ratio paused and traded sideways for several months, value regained its leadership, and commodity prices continued their ascent. 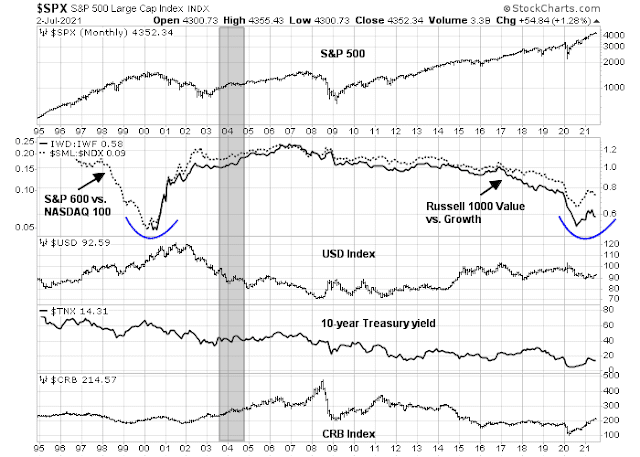 My base case scenario calls for several months of sideways range-bound movement in these indicators followed by a period of renewed growth. New Deal democrat, who monitors economic statistics and divides them into coincident, short-leading and long-leading indicators, is constructive on the economic outlook with an important caveat about the pandemic:

All of the important metrics for the economy remain positive.
But, in addition to supply chain issues, we have to start worrying about COVID again, because the delta variant has now taken hold in up to 8 States with rising new cases. All of those States have fewer vaccinations per capita than the national average, and most of them much below the average. By the end of July, I anticipate that it will be clear there is a new “wave” of cases in the relatively unvaccinated States. Aside from the human cost, it is unclear how much this will retard recovery in the economy as a whole.

Also, keep a close eye on commodity prices and the cyclically sensitive copper/gold and base metal/gold ratios. The copper/gold ratio is consolidating sideways while the more diversified base metals/gold ratio is starting to exhibit a more bullish pattern. Should these two ratios strengthen further, it will be an important signal of global economic strength and put upward pressure on bond yields, steepen the yield curve, and be bullish for the value stocks over growth.

Stay tuned. The evolution of growth expectations over the next few months will have important implications for the markets. Until then, expect a choppy sideways pattern in all asset classes as the growth uncertainty resolves itself.

8 thoughts on “How to navigate the mid-cycle expansion”