A pause in the reflation trade? – Humble Student of the Markets

Recently, a growing narrative in the market is arguing for a pause in the reflation trade for the following reasons: 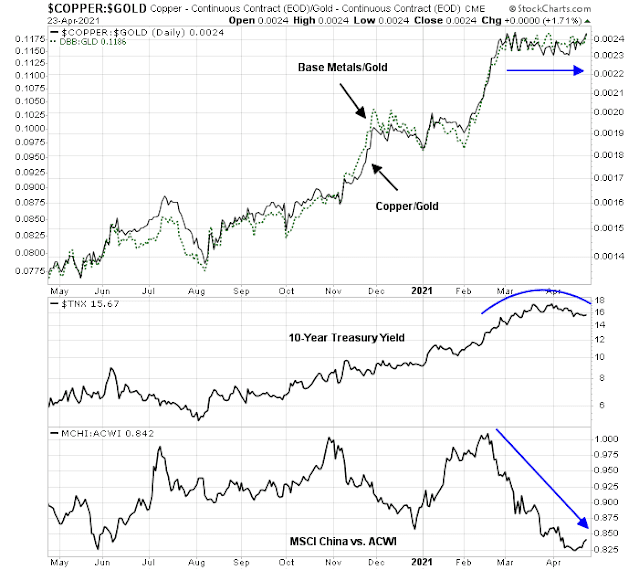 If these market signals are indeed pointing to a pause in growth expectations, then investors should be prepared for either a risk-off tone in the markets or some choppiness and consolidation in the months ahead.
I beg to differ. The reflation theme is alive and well.

A different kind of rotation

My analysis of global markets reveals a different explanation of market action, and it’s attributable to a rotation in global equity markets based on specific regional factors as shown by the chart below of the relative performance of different regions against ACWI.  In the US, the S&P 500 has been outperforming ACWI since late February while the NASDAQ 100 has traded sideways. European markets have been flat against ACWI since December. Asian and emerging markets have lagged. Equity markets are moving because of different factors specific to their regions.

Too far, too fast

In the US, the stock market is overextended. The S&P 500 overran a rising trend line, and recycled while exhibited a hanging man candlestick indicating a possible reversal. Similar past episodes have marked blow-off tops that resolved with short-term pullbacks. 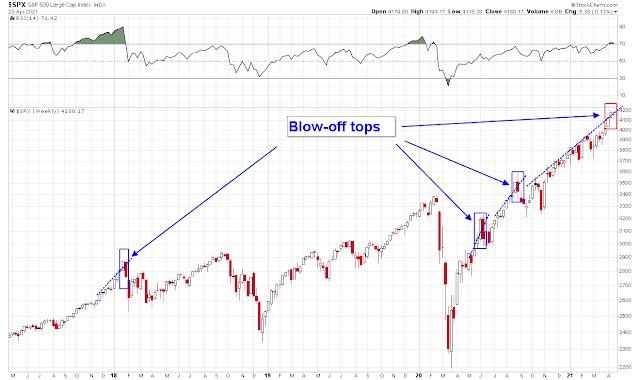 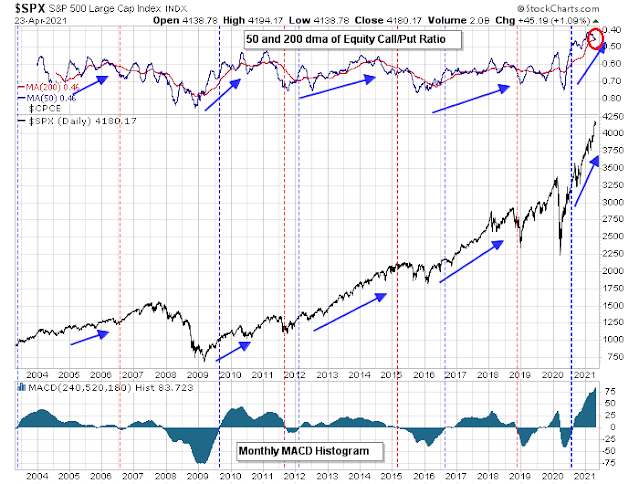 However, the growth to value rotation remains intact. The 5-day RSI of the Russell 1000 Value to Growth ratio recycled off an oversold condition, which is a buy signal. 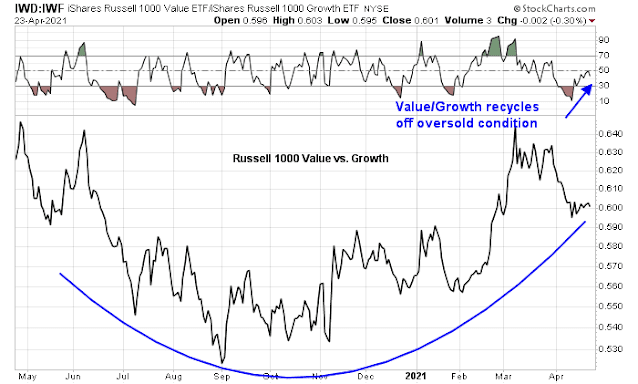 Moreover, the valuation dispersion between value and growth stocks are still historically high, which gives room for the trade to converge. 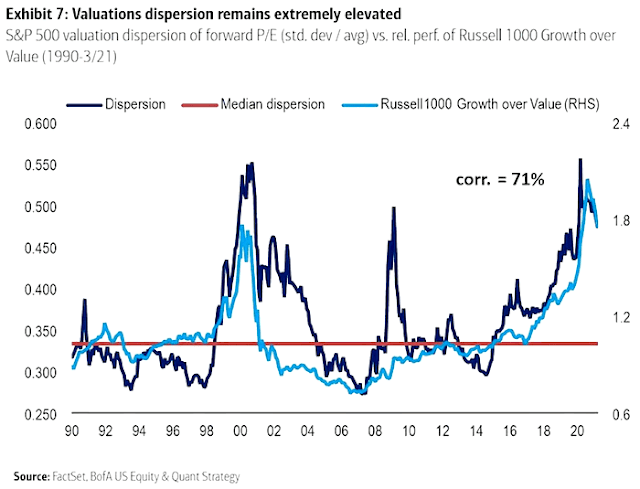 As well, the NY Times had a cautionary message for tech and growth investors. Regulators are going after technology companies all over the world, which will be a headwind for their growth outlook and represents an attack on their business models.

China fined the internet giant Alibaba a record $2.8 billion this month for anticompetitive practices, ordered an overhaul of its sister financial company and warned other technology firms to obey Beijing’s rules.
Now the European Commission plans to unveil far-reaching regulations to limit technologies powered by artificial intelligence.
And in the United States, President Biden has stacked his administration with trustbusters who have taken aim at Amazon, Facebook and Google.
Around the world, governments are moving simultaneously to limit the power of tech companies with an urgency and breadth that no single industry had experienced before. Their motivation varies. In the United States and Europe, it is concern that tech companies are stifling competition, spreading misinformation and eroding privacy; in Russia and elsewhere, it is to silence protest movements and tighten political control; in China, it is some of both.

The most convincing argument against a pause in the reflation trade can be seen in commodity prices. Both the CRB Index and equal-weighted commodities made fresh all-time highs. Does a pause look like this? 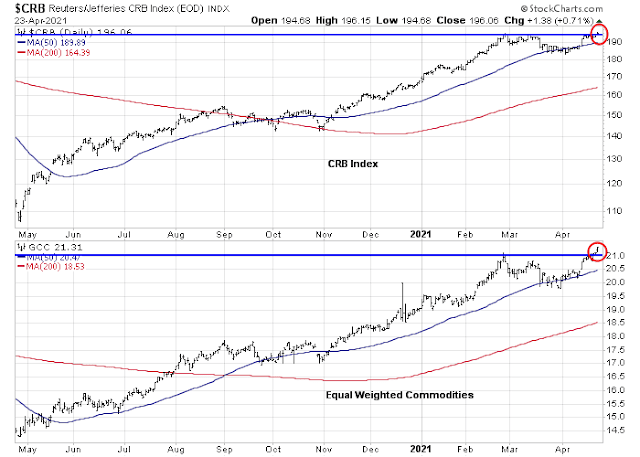 Over in Asia, the markets are showing concerns over the nascent signs of a slowdown in China. Credit growth is rolling over, which usually leads to a deceleration in GDP growth. 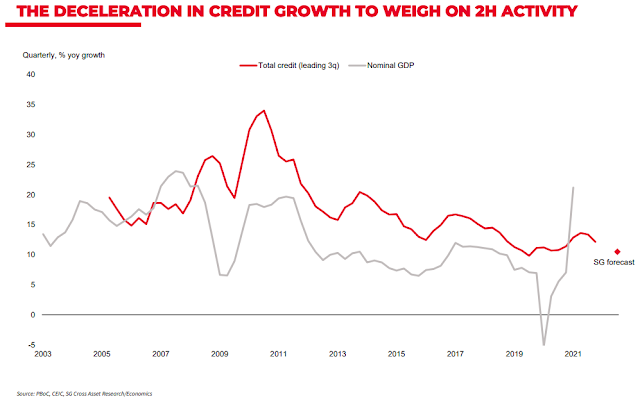 The Huarong debacle has also sparked increasing worries in the bond market. Yield spreads are widening, which is an indication of tightening credit conditions that exacerbate slowdown risk. 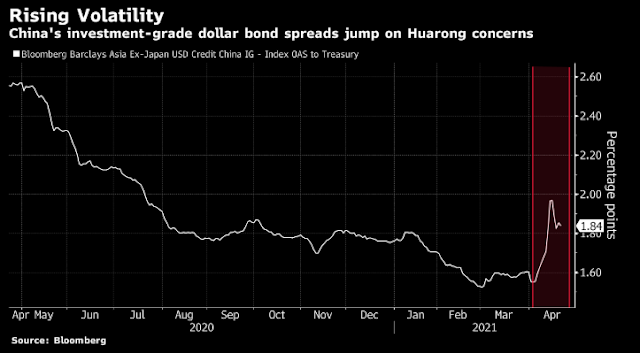 The anxiety can be seen in the relative performance of Chinese stocks against ACWI. The bad news is MSCI China have plummeted on a relative basis. The good news is it is holding a key relative support level, indicating that the market does not expect a disorderly rout in the Chinese economy.

As for the rest of the world, the stock markets of the remaining regions are still driven by the progress of the war against the pandemic. Until the global population reaches herd immunity, either from immunization or the ravages of infection, the world is not protected against the virus and the global economy is at risk of slowdowns and supply chain disruptions.
These Financial Times charts illustrate the vaccination effects in different countries. Keep in mind that UK vaccination rates are one of the highest in the world, which explains the dramatic drop in hospitalization.

Israel is one of the few developed economies that has made the greatest progress in vaccinations, followed by the UK, and the US. The EU is just starting to ramp up after some teething pains, and Asian countries are lagging behind. Large emerging market countries like Brazil and India are still struggling. 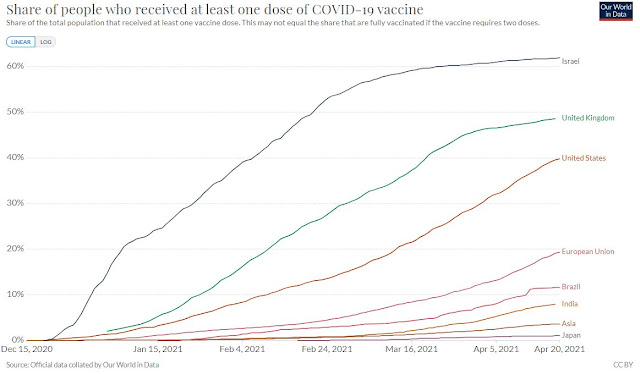 Here is what this means for the relative performance of different regional stock markets and economies in the months ahead. The EU equity outlook should start to improve as it reflects the ongoing vaccination ramp-up in Europe. Both large and small-cap eurozone equities have been flat to up against ACWI. UK equities, however, have been held back by the ongoing Brexit problems in Northern Ireland. 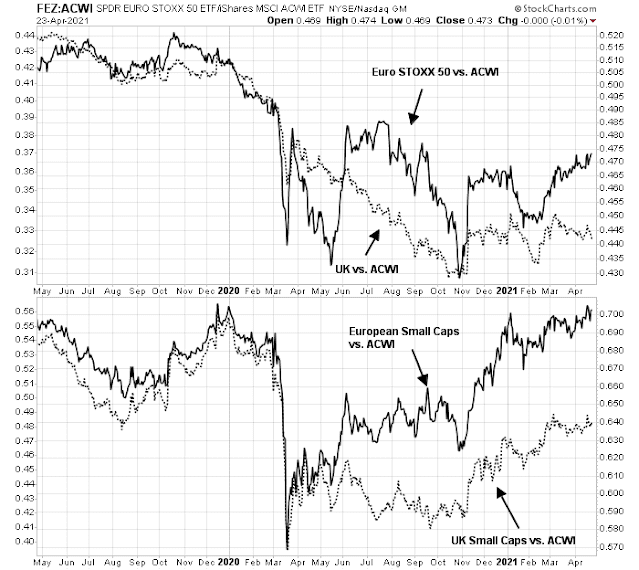 European equities could be a source of better relative performance in the months ahead. Eurozone equities are not highly valued and their outlook is expected to improve as vaccinations rise. As well, Germany’s top court handed down a welcome decision last week to allow the country to ratify the EU pandemic recovery fund, which opens the door to more fiscal stimulus. UK equities are cheap by developed market standards. The UK is nearing herd immunity, though investors bear the risk of an unraveling of the Good Friday Accord. 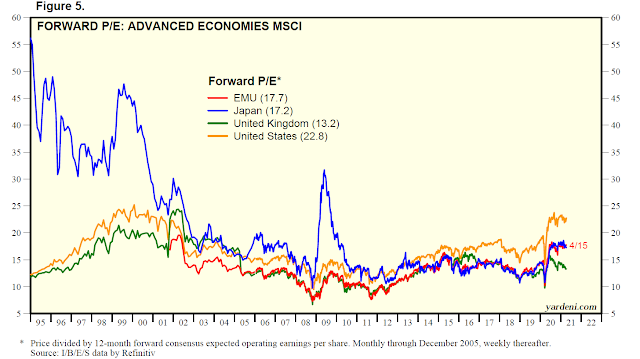 On the other hand, Asia and emerging markets are areas to avoid for a variety of reasons. Asia is vulnerable owing to a China slowdown, which will affect China’s major trading partners in the region. As well, the pandemic appears to be out of control in India, whose case counts are skyrocketing amid reports of an overwhelmed healthcare system is near collapse.
A number of other EM countries are not faring well with the pandemic either. The World Health Organization recently warned about rising infection rates in Argentina, Turkey, and Brazil. In addition, there are over 30 countries that haven’t even begun to vaccinate their populations, most of which are in sub-Saharan Africa.
The world is not protected from this virus until we all are. As the vaccination rates of the developed economies rise, the attention will shift to the vaccination rates in EM countries and their lack of progress. This could be the spark for a global growth scare in the months ahead. 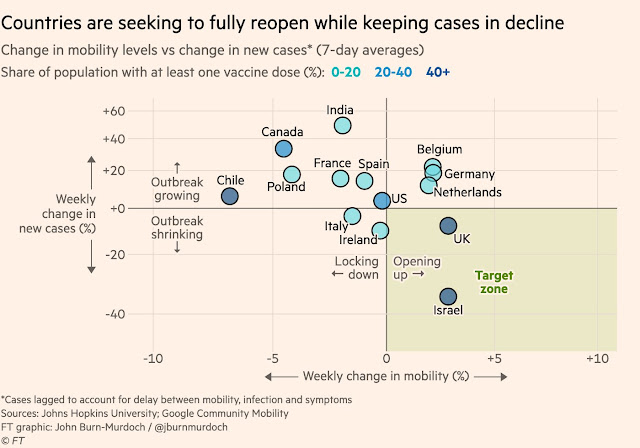 To recap, I believe that the reflation trade has not paused. Cyclically sensitive indicators of global trade, such as Korean and Taiwanese exports, are surging. 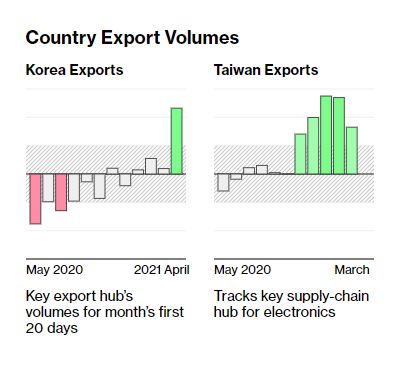 However, global markets are undergoing a rotation away from an extended US market. Europe offers more attractive opportunities in the months ahead. Asia and the emerging markets should be avoided owing to a combination of China slowdown risk and the re-emergence of the uncontrolled spread of COVID-19 in a number of major EM countries.

13 thoughts on “A pause in the reflation trade?”