Sell in May? Where to hide if you do – Humble Student of the Markets 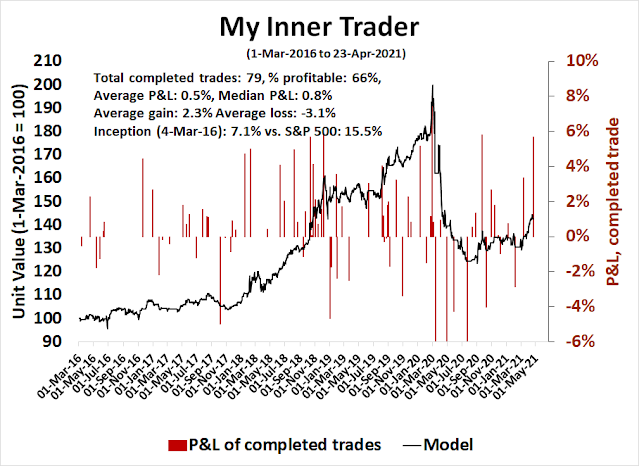 Is it time to sell in May and go away? Market internals are starting to look wobbly. The relative performance of the defensive sectors is flashing warning signs. Two of the four sectors are testing relative breakouts, and the other two are consolidating sideways after rallying out of relative downtrends. 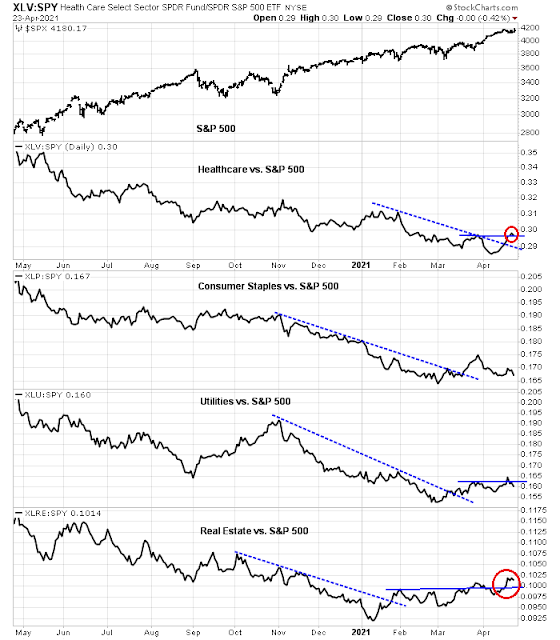 If the market does weaken, where can investors hide?

A number of risks are emerging that makes the US equity market vulnerable to a setback. The S&P 500 recently exceeded the Wall Street strategists’ Bloomberg survey average target of 4130. With the exception of the 2017 tax cut related ramp and the 2020 rally, when the Street was chasing market expectations, such episodes have been followed by market weakness or a period of sideways price action. 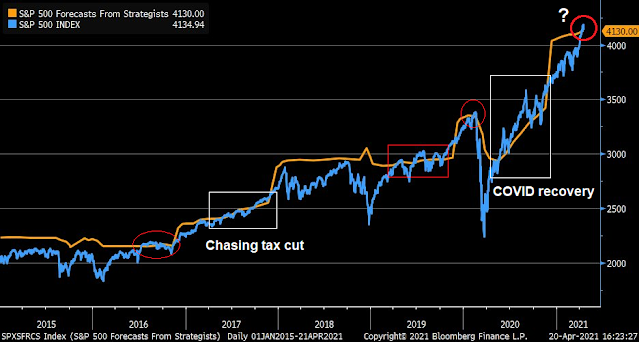 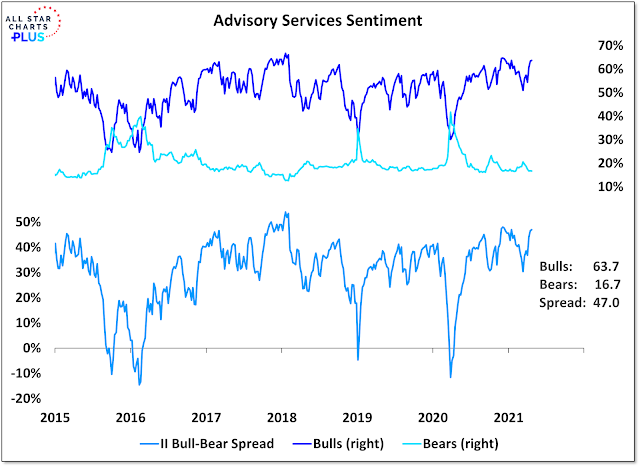 So is the AAII survey. While giddy bullishness is not as effective as a sell signal compared to panicked sentiment as buy signals, the stock market has often encountered trouble advancing when sentiment was this bullish in the past. 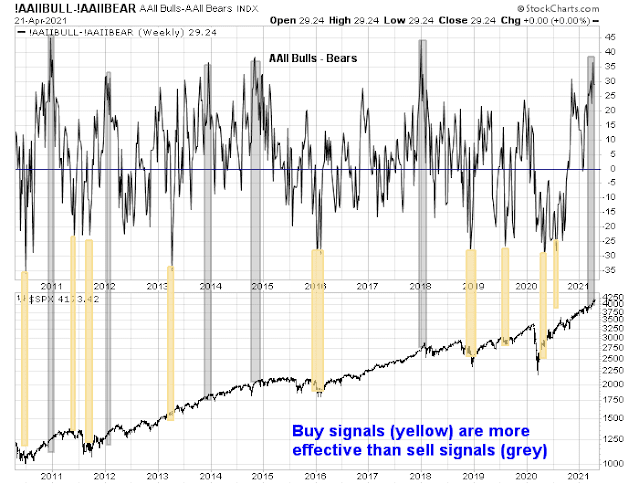 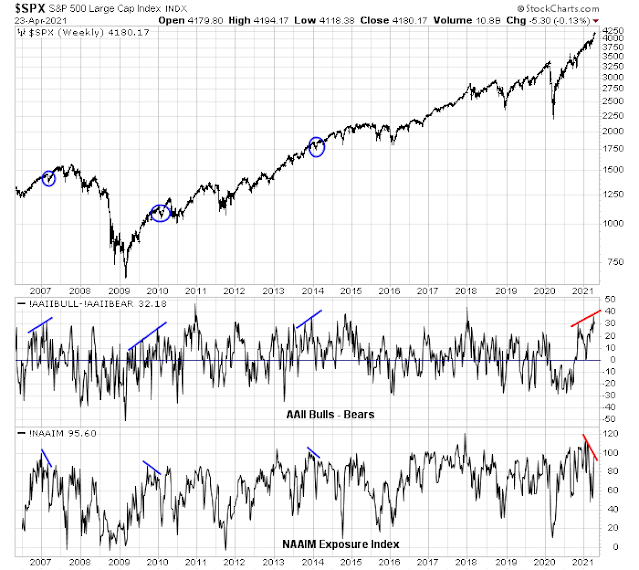 I am also seeing negative breadth divergences. While the NYSE Advance-Decline line is confirming the strength in the S&P 500, NYSE and NASDAQ new highs are not. 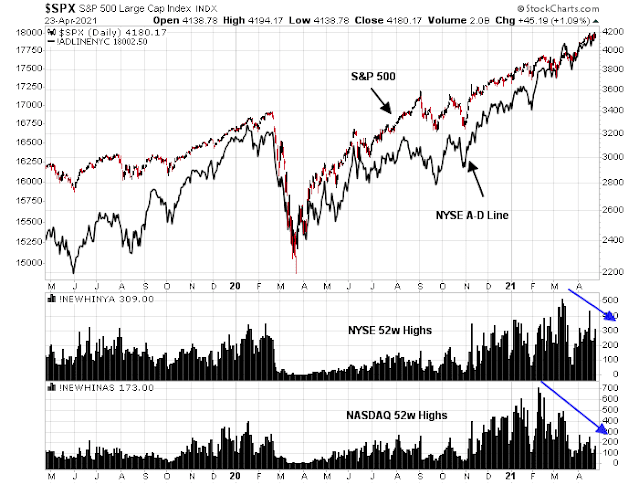 On their own, none of these indicators are immediate and actionable sell signals. In fact, there is a possibility that the S&P 500 could grind its way to another high in the coming week. If we put all these indicators together, they form a picture of a vulnerable market that is poised for a setback.

What’s the downside target for the S&P 500? It’s difficult to make a projection without knowing the bearish narrative, which hasn’t emerged. That said, initial support can be found at the 3970-4000 level, which coincides with a rising trend line and the 50-day moving average (dma). Further support can be found at the 200 dma at about 3620. My working hypothesis is a peak-to-trough pullback of 5-10%. 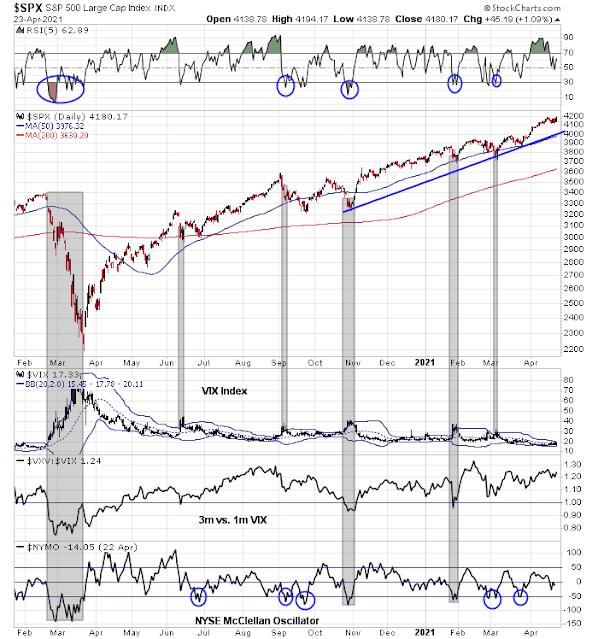 Traders should look for some of these signposts that the market may have bottomed, with the usual caveat that oversold markets can become more oversold if the market panics.
Currently, none of these indicators have flagged a bottoming condition. (Market bottoms are like pornography. I’ll know it once I see it.)

In a market pullback, there are few places to hide as virtually all stocks will fall in concert with the market. These opportunities were identified two weeks ago, but they bear repeating (see Internal rotation + Seasonality = More gains).
Gold mining stocks (GDX) represent one of the few exceptions of a class of equities with negative beta, or stocks that are negatively correlated with the stock market. GDX recently achieved an upside breakout through a bull flag, and the GDX to gold ratio also exhibited a similar upside breakout. Gold bullion, however, is a laggard and it has not broken out to the upside yet. 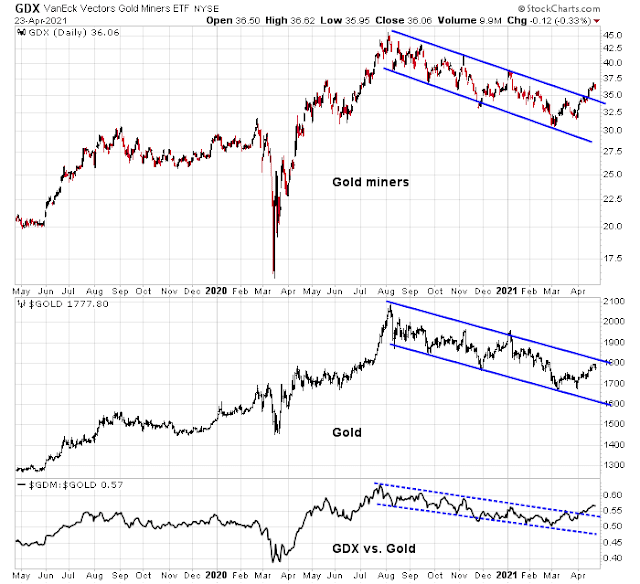 The point and figure chart of GDX shows an upside target of roughly $40, which represents an upside potential of 11% from current levels. 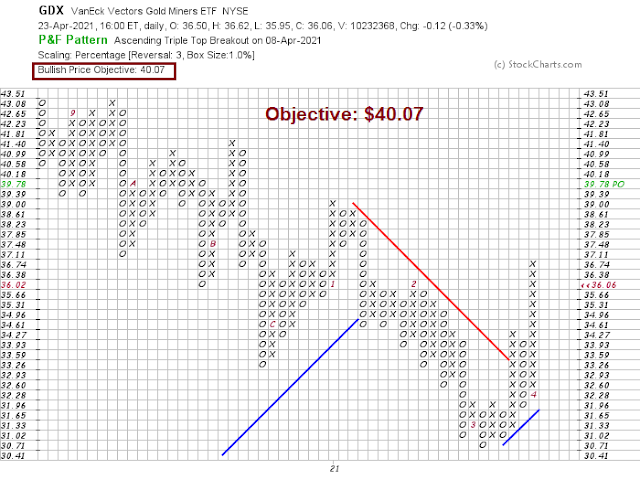 Another asset class that has shown a negative equity beta is Treasuries. The 10-year Treasury yield broke a rising trend line and rolled over while exhibiting a negative RSI divergence. (As a reminder, bond prices are negatively correlated to bond yields. As bond yields fall, bond prices rise). 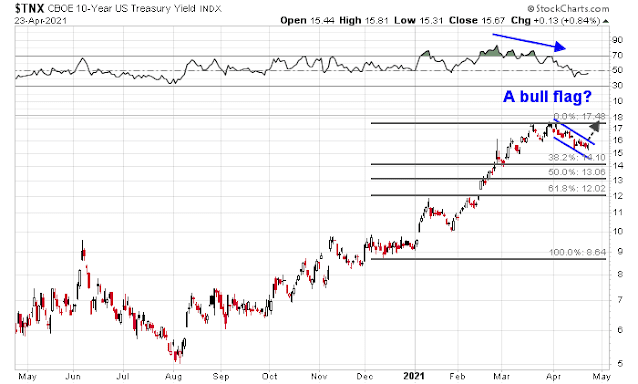 My concern is the yield reversal has the appearance of a bull flag, which is a bullish continuation pattern indicating that the primary trend in yields is up. Nevertheless, the first Fibonacci retracement level for the 10-year yield is about 1.4%.
A point and figure analysis shows the same target of 1.4%. In conclusion, the stock market has become increasingly vulnerable and a pullback may have already begun. None of the bottoming indicators have flashed any alerts, which indicates that the lows are not near. Expect some volatility in the coming week as there is an FOMC meeting and major tech companies report earnings. In the near term, traders may be able to find some tactical refuge in negative beta assets such as gold mining equities and Treasuries. My base case scenario calls for a 5-10% correction. Investment-oriented accounts should view market weakness as buying opportunities.