Recently, an investor aptly characterized value investing as a portfolio of problems with a call option on good news. One sector stands out as a group of value stocks that are taking on growth characteristics. As shown by its relative performance against MSCI All-Country World Index (ACWI), this cyclical industry bottomed out on a relative basis in March 2020 just as the stock market bottomed and it has been on a tear ever since.

That industry is mining and the mystery chart shows the relative performance of the iShares MSCI Global Metals & Mining Producers ETF (PICK) to ACWI.
Here is my bullish thesis on this group.

The promise of electric vehicles

The electoral win by the Democrats has profoundly changed US climate change policy.  In particular, Biden is pivoting toward green energy initiatives. Green energy is a complex subject for investors, and the supply change is complicated with many players. 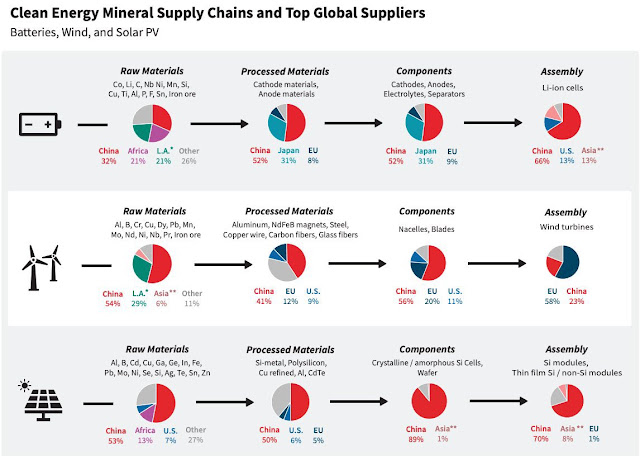 One focus is the auto industry. GM has vowed to produce all-electric vehicles by 2035. Volvo has gone further and promised an all-electric offering by 2030. In fact, EV sales have overrun analyst forecasts. 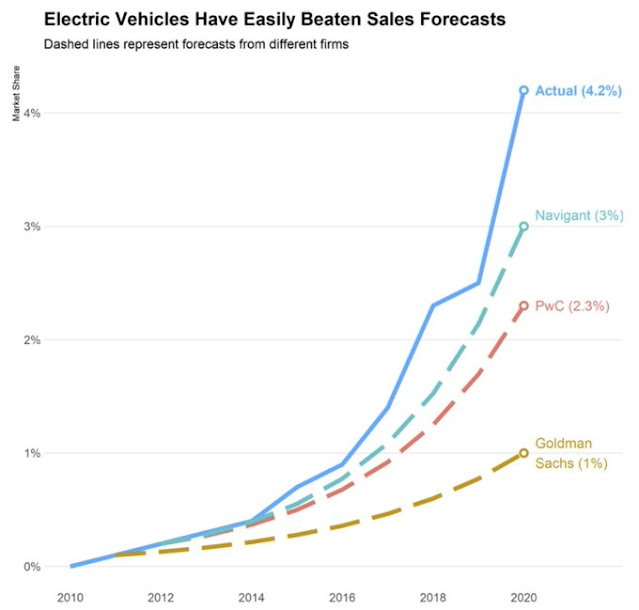 Rising EV demand means a secular shift from hydrocarbons to a variety of metals – lots of it. Even the CME has gotten into the act by launching a lithium futures contract. 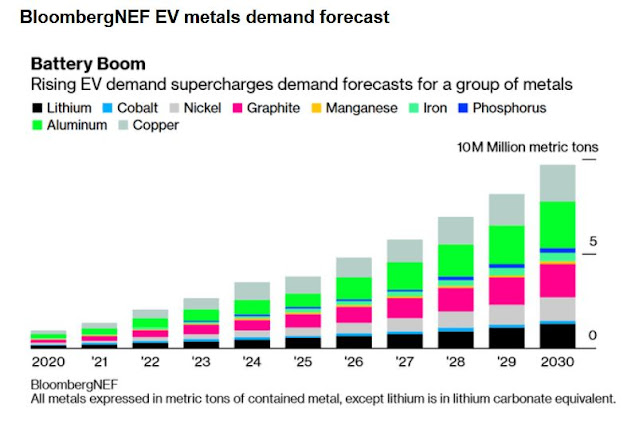 Experienced commodity analysts understand that at relatively small swings in the supply-demand imbalances can create large price swings. In the face of escalating metals demand, the supply of many metals is about to fall into a significant deficit. Take aluminum, just as an example. 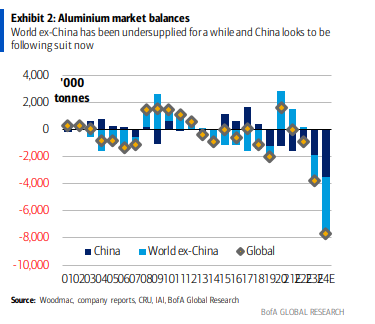 Here is copper, which is a key component in wiring, and it is expected to see a structural deficit in the near future. As the combination of renewable electrification and EV adoption takes hold over the next decade, the demand for metals is expected to explode. That’s bullish for base metals, and for the mining industry.
Metals and mining stocks are perceived to be value stocks. They are about to become growth stocks over the next few years.

However, the industry faces a number of cyclical cross currents over the next 6-12 months. The bull case consists of rising cyclical demand as the global economy re-opens after the pandemic. Numerous indicators signal a V-shaped recovery. Job postings have risen to pre-pandemic levels. 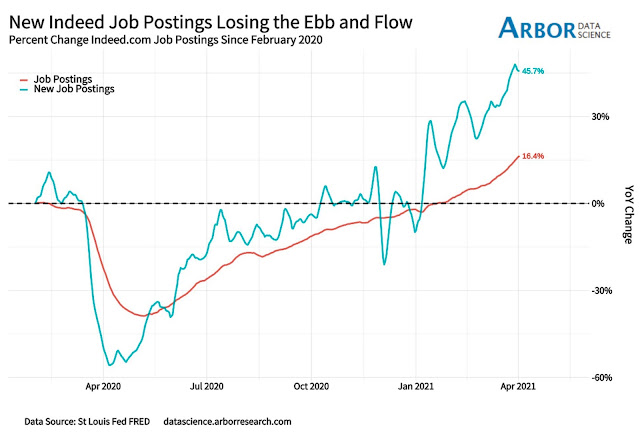 Global industrial metals PMIs are spiking. Copper PMI shows strength in the US and Europe, but some softness in Asia. 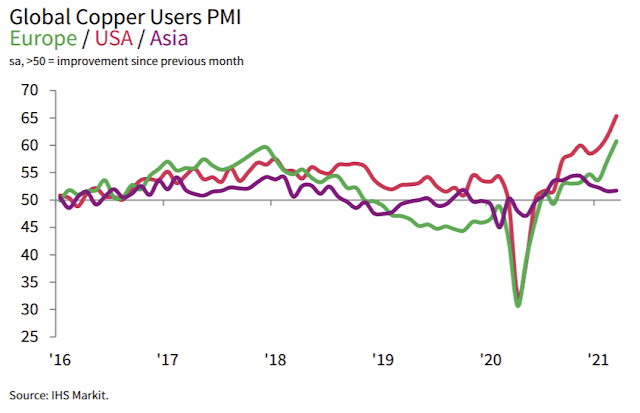 This brings me the key cyclical risk to the metals complex. China is slowing. A year after it engaged in a bout of emergency stimulus, Beijing is pivoting to a policy approach of quality over quantity growth. Credit growth is rolling over. 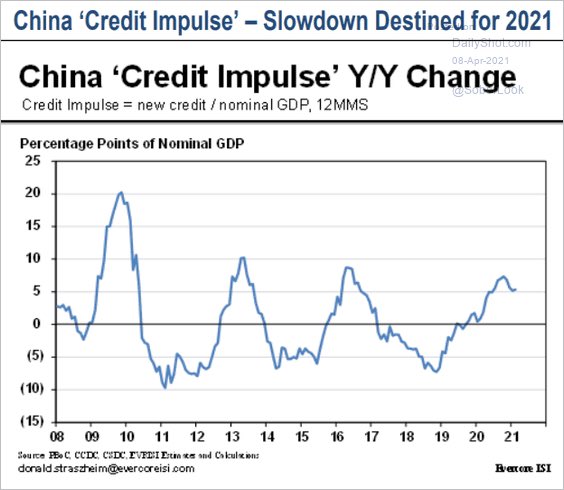 As a sign of Beijing’s policy tightness, corporate borrowings have been falling. In particular, the borrowings of government-backed SOEs have fallen the most. 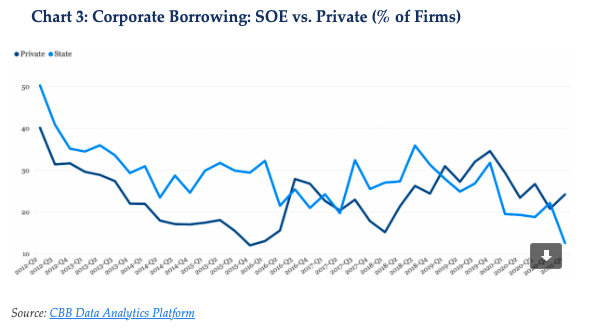 In the past, commodity prices have been correlated with changes in Chinese credit. However, investors need in mind the bullish cyclical effects of the global economic recovery as an offsetting bullish factor. 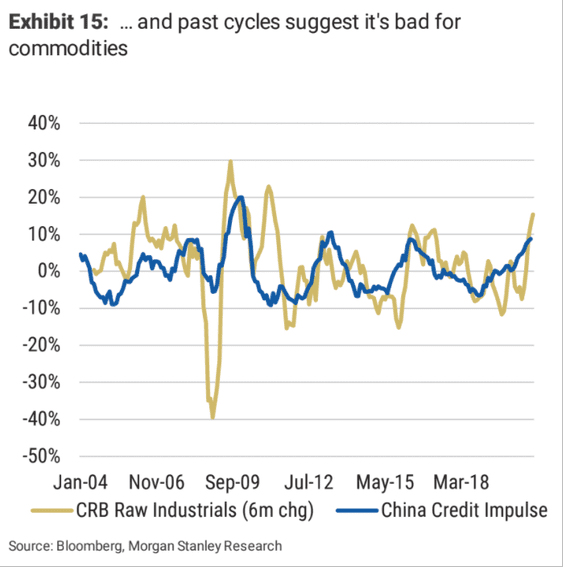 What does this mean for investors?
First, my preferred diversified ETF of choice is iShares MSCI Global Metals & Mining Producers ETF (PICK), which allows the investor exposure to a variety of global and non-US mining companies. As the table below shows, the largest US company on the list ranks fifth in portfolio weight, indicating a lack of choice for American investors in this industry. 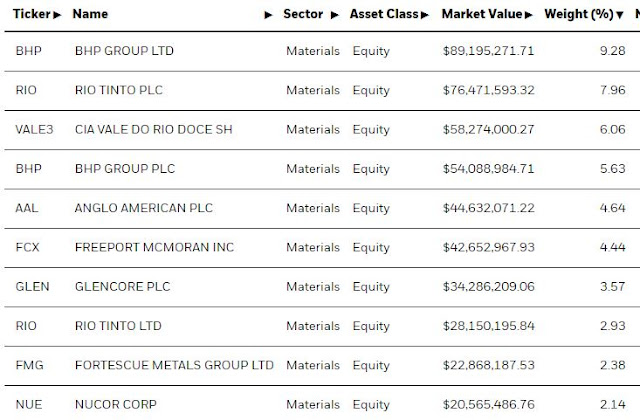 From a technical perspective, PICK is in well-defined uptrends, both on an absolute basis and relative to ACWI. In the short-term, some caution may be warranted as it is exhibiting a series of negative RSI divergences as it broke out to an all-time high. 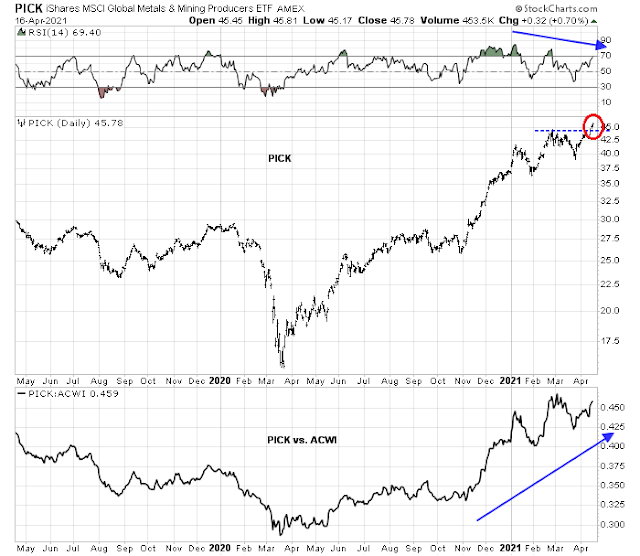 The deceleration in price momentum is probably attributable to weakness in China. Tactically, I am monitoring the following indicators. First, China’s Economic Surprise Index, which measures whether economic statistics are beating or missing expectations, peaked out last summer and has been falling ever since.

The relative performance of the Chinese stock market to ACWI and the markets of China’s major trading partners are all either falling or trading sideways. This is an indication of a loss of economic momentum throughout the region. 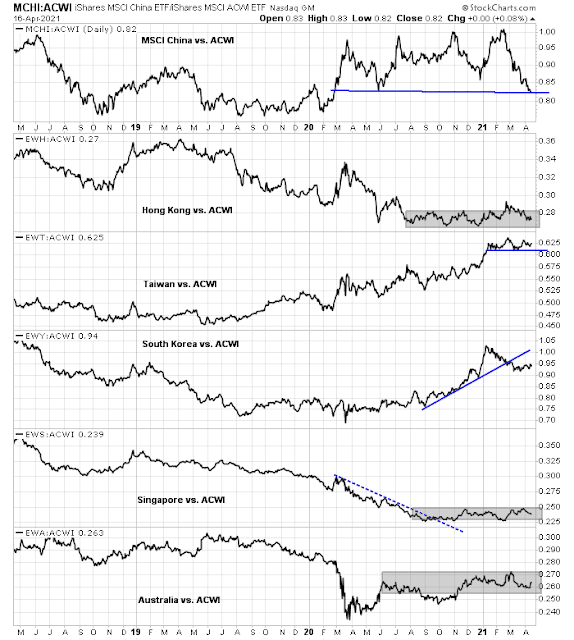 Chinese material stocks have been underperforming global materials and testing a relative support zone, indicating weakness in this sector compared to the rest of the world.

These are all signs of weakness in Chinese infrastructure spending. However, the relative strength of PICK to ACWI is an indication that the market expects the other major regions to become the locomotives of global growth. I am also watching China’s credit market. The Huarong Affair is becoming an acid test as the price of its bonds plunged. The key question is whether Beijing will allow an SOE majority-owned by China’s finance ministry to default on its debt. Should the credit markets become disorderly, the authorities will likely resort to their well-tested method of flooding the financial system with liquidity, which would be supportive of commodity prices. 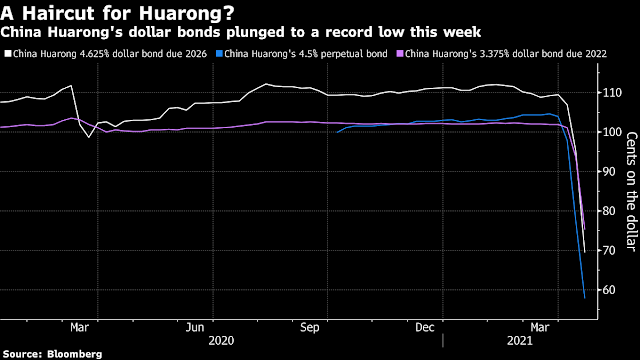 In conclusion, the mining industry is currently viewed as value stocks with cyclical exposure, which is bullish as the global economy recovers. In addition, it is a beneficiary of the coming electric vehicle boom, which is expected to give the industry some growth characteristics. A short-term risk is a China slowdown which dampens commodity demand. Investors should view any fears related to a Chinese growth pause as a buying opportunity.