A blow-off top ahead? – Humble Student of the Markets 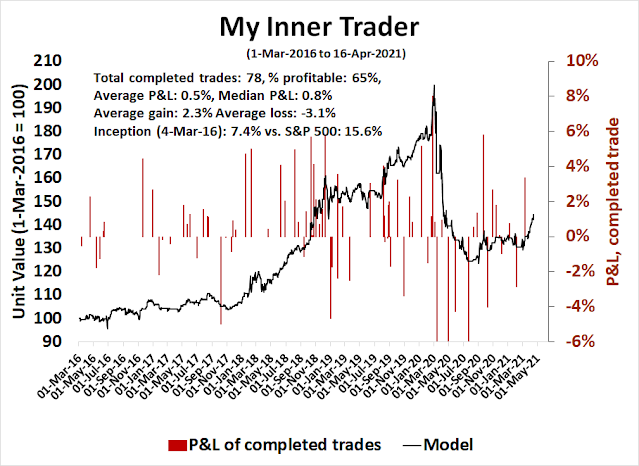 Setting up for a blow-off top

The S&P 500 has been rising steadily since late February. As the stock market advanced, readings became increasingly overbought. The S&P 500 has spent two consecutive weeks above its weekly Bollinger Band (BB). Past upper BB episodes have tended to be signals of positive momentum. that led to further gains. The market spent several months on an upper BB ride in late 2017 and early 2018 before it finally topped out. 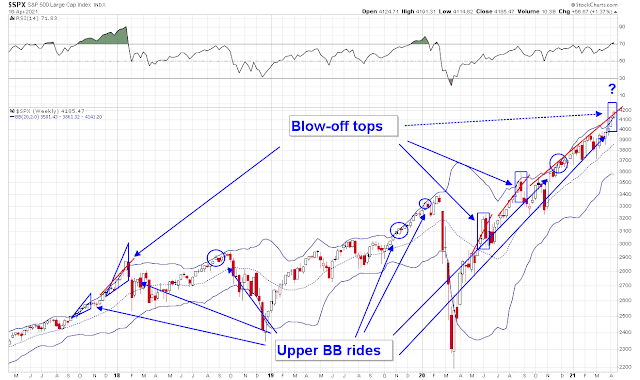 It appears the S&P 500 is undergoing another melt-up, with a blow-off top ahead. In the last four years, overruns of a rising trend line have been signals of an imminent blow-off top that lasts no more than two weeks.
A closeup look at the S&P 500 daily chart shows more details. The index has overrun rising trend line resistance, which happened twice since the March low. The market topped out after prices went parabolic within a week of the overruns. 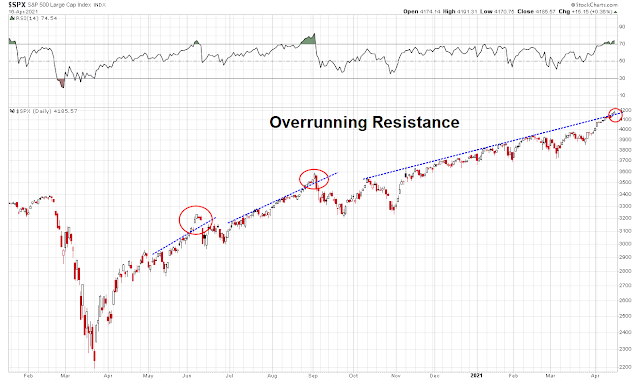 While the recent historical evidence points to a market top in the middle of next week, the rally could run a little further because a number of key sentiment models are not overly stretched. In particular, the Goldman Sentiment Indicator, which measures positioning instead of just opinion, took a step back from “stretched” territory indicating further room for equities to advance. 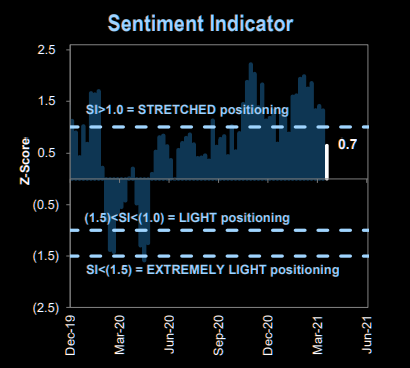 Similarly, the Fear & Greed Index is nowhere next euphoric territory. 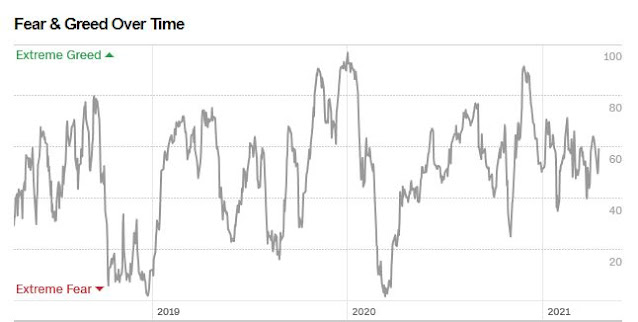 Time for a pause?

The big picture points to a temporary pause in the advance. I have highlighted this analysis in the past. The percentage of S&P 500 stocks above their 200 dma is well over 90%, and such readings have been “good overbought” signals that resolved in steady multi-week advances. The rallies usually did not pause or terminate until the 14-week RSI cross the 70 overbought level, which it did last week. 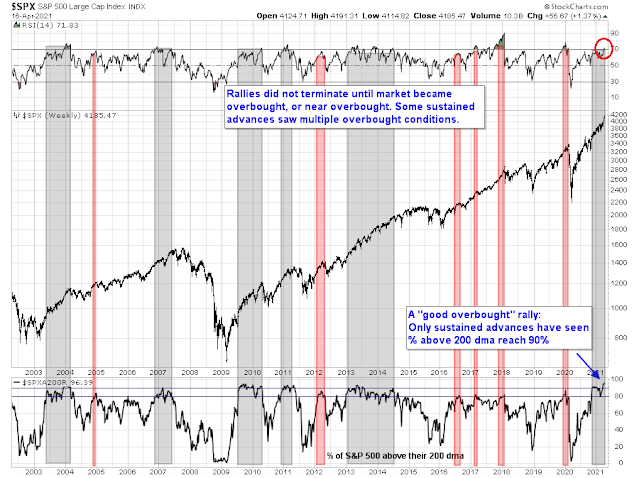 As for the timing of a top, my working hypothesis is the next one or two weeks. Technical analyst Dean Christians recently pointed out that “the percentage of S&P 500 members trading above their respective 50-day moving average registered an overbought momentum buy signal on the close of trading on 4/8/21. The table below contains all signals that occurred at a 252-day.” As this signal was triggered on April 8, 2021, the historical study (n=22) shows that returns peak out between two weeks and a month after the signal. If history is any guide, this puts the timing of a peak sometime in late April or early May. 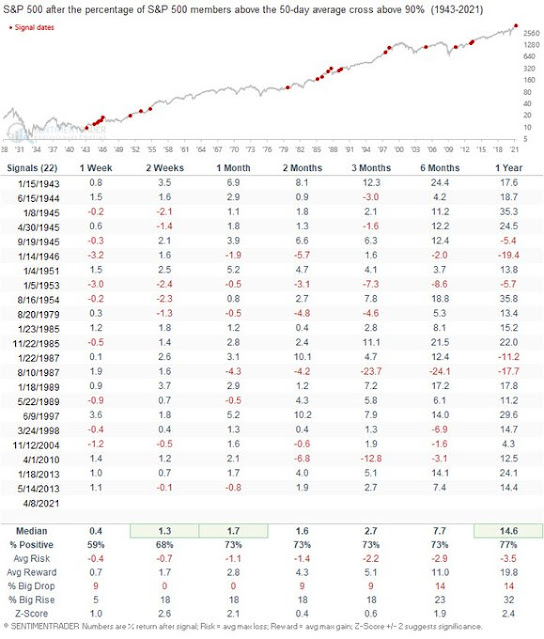 Last week, I had highlighted a number of opportunities from a healthy internal market rotation that allowed the broad indices to climb further (see Internal rotation + Seasonality = More gains):
Those setups have generally worked well. First, I had pointed out that value stocks had become severely oversold against growth stocks and due for a rebound. The value/growth ratio has recycled off an oversold reading and value appears to be headed for renewed leadership after several weeks of relative weakness. 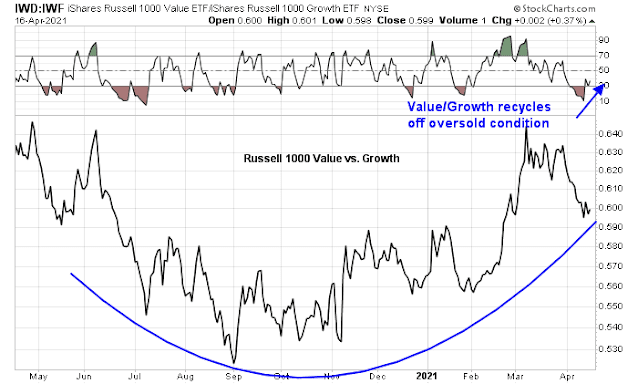 I also observed that the bond market was poised for a rally, and bond price duly rebounded. You can tell the character of a market by the way it responds to news. Last Thursday, initial jobless claims dropped by an astounding -193,000, blowout prints in retail sales, NY Empire Manufacturing, and Philly Fed Manufacturing. The market reaction was a decline in the 10-year Treasury yield. Bond yields appear to be ready to fall and prices appear to be ready to rise. The risk is this is just a countertrend move and yields are tracing out bull flags they way they did in the last few months. 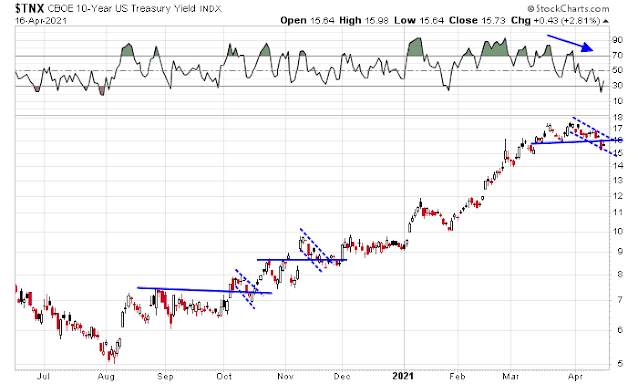 Lastly, I had highlighted a bull flag in gold mining stocks (GDX). GDX staged an upside breakout from the bull flag – a buy signal.

Waiting for the top

My base case scenario calls for a possible buying frenzy that traders should sell into. There is no need to panic just yet. The relative strength of defensive sectors have mostly bottomed out and they are trading sideways. However, none have begun relative uptrends that would be cautionary signals. 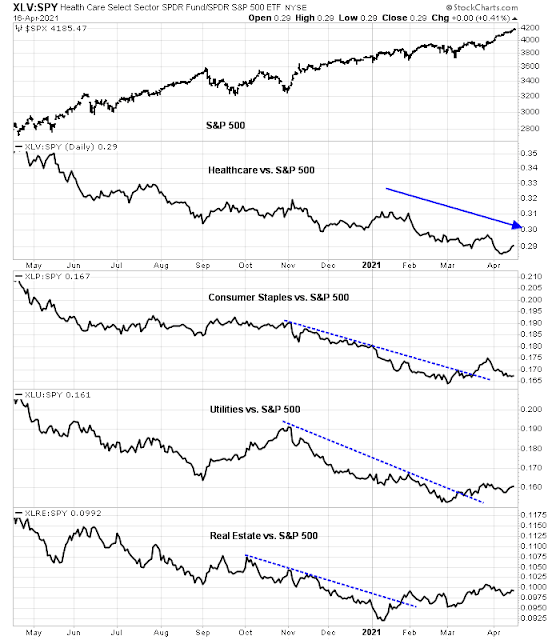 Despite my caution, I expect any weakness to be no more than 5-10%. This is still a bull market. Both the Dow Jones Industrials and Transports have achieved fresh all-time highs, which are classic Dow Theory buy signals indicating the long-term trend is up. 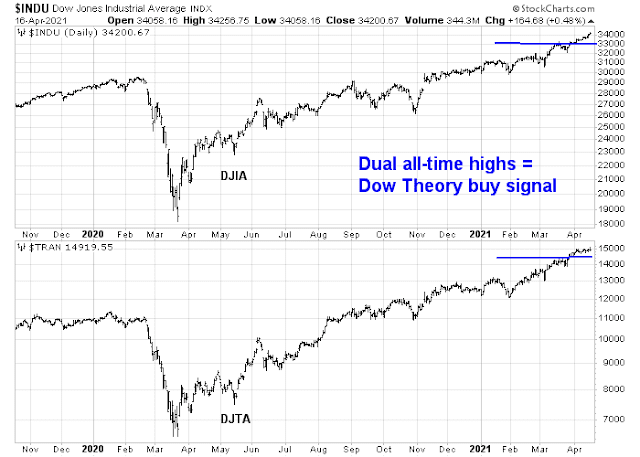 Investors should view any weakness as buying opportunities. Traders should be positioned for a possible blow-off top, followed by a sharp pullback of no more than 5-10%.
Disclosure: Long IJS