The sum of all fears: Inflation! Inflation! – Humble Student of the Markets

The latest BoA Global Fund Manager Survey shows that respondents believe the biggest tail-risks to be inflation and its effects on the bond market. 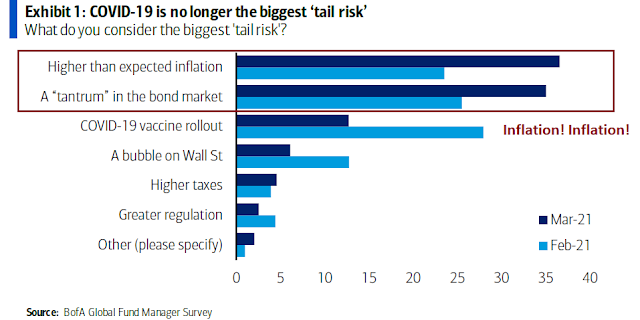 Are these worries overblown? How will these concerns affect asset prices?

How transitory are inflation pressures?

Recently, there has been a spate of reports about rising supply chain bottlenecks and their effects on input prices. As the global economy recovered, delivery delays have risen and so have input prices, which will undoubtedly put upward pressure on inflation statistics. 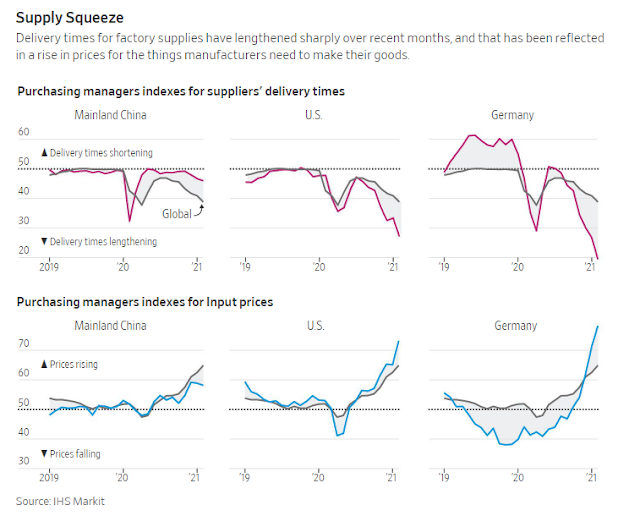 Indeed, inflation surprises have appeared all over the world. 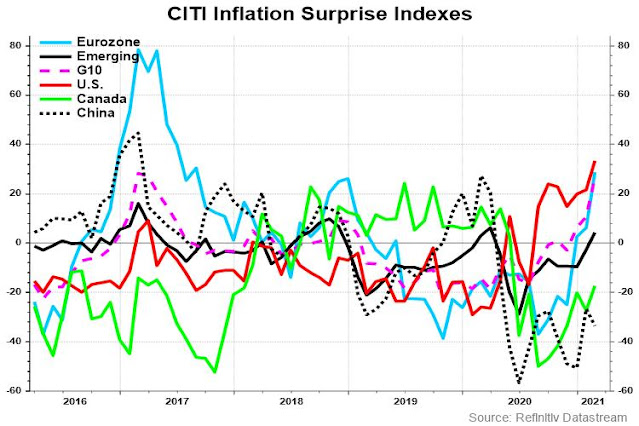 Inflation fever is not just confined to economists and market analysts, but it is seeping into the public’s imagination. Google searches for “inflation” have spiked.

The NFIB small business survey of pricing expectations is rising. Historically, this has led to upward pressure on core CPI. 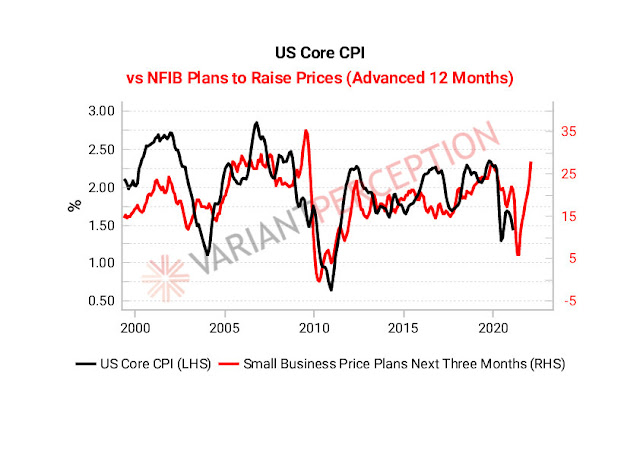 On the other hand, the economy is arguably not poised for an uncontrolled inflationary spiral. Monetary theorists believe that inflation is purely a monetary phenomenon (PQ =  MV). The M component of that equation, M2 money supply growth has skyrocketed, but the V component, or monetary velocity, remains tame. 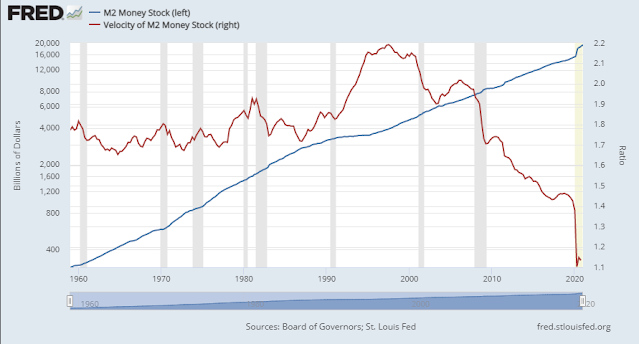 In addition, Joseph E. Gagnon at the Peterson Institute argued that inflation fears from Biden’s fiscal stimulus program are overblown. For historical parallels, investors should look to the experience of the Korean War, not the Vietnam War. That’s because government spending during the Korean War was short-term and perceived as such. By contrast, LBJ’s Guns and Butter policy during the Vietnam War was long-term and affected expectations accordingly. 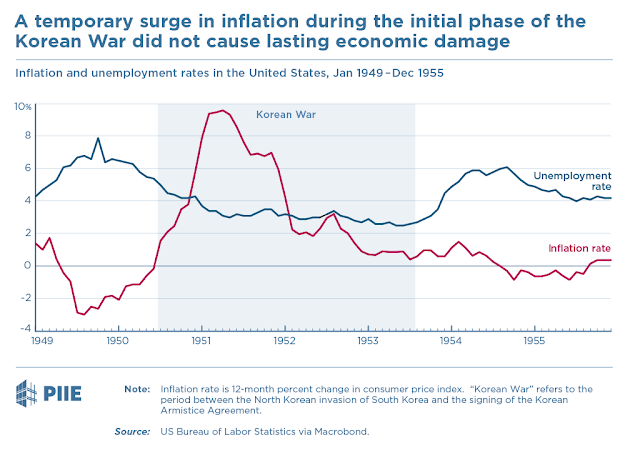 Dhaval Joshi, chief strategist at BCA Research, says whether the new stimulus is considered wealth or income depends on whether the household receiving it has a low or high income to begin with. But looking at past stimulus checks, there weren’t meaningful shifts in either consumption or inflation. 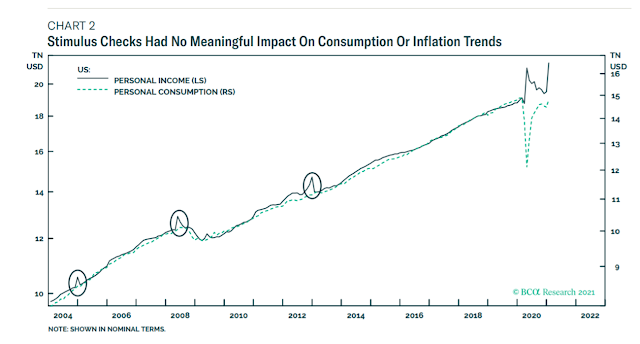 The FOMC statement and Powell’s remarks at the post-FOMC meeting press conference made the Fed’s reaction function very clear. The Fed’s latest Summary of Economic Projections raised GDP growth, inflation, and lowered the unemployment rate. Despite the expectations of stronger growth and inflation, the median trajectory of the Fed Funds rate remained unchanged and it does not expect rate hikes until 2023. However, the “dot plot” did show a few members raising their expectations of rate hikes in 2022.
This is consistent with the framework review that was unveiled at Jackson Hole last summer, which established that the Fed will not raise rates at the first signs of growth. It wants to see maximum employment and evidence of sustained higher inflation. Moreover, the Fed is increasingly focused on the jobs market and the effects of inequality.
Here are some of the metrics that Powell is looking at. First, one of the components of the inflationary spiral of the 1970’s was characterized by wage growth and cost-of-living adjustment clauses in union contracts. Today, wage growth is below the pre-GFC peak. Moreover, fourth quartile wage growth is lagging the overall figure, which is widening inequality. These were metrics cited by Janet Yellen when she was Fed chair as progress towards full employment. 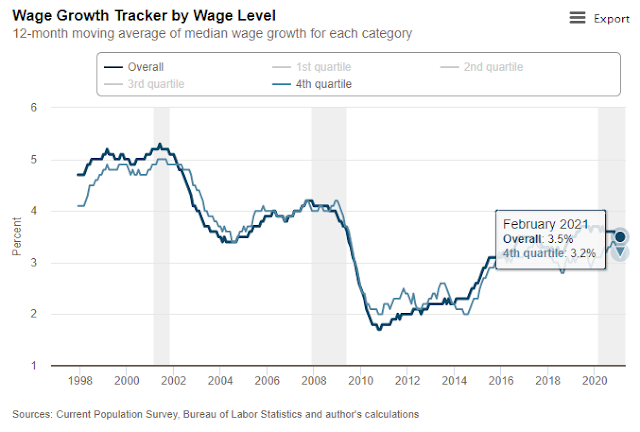 Keep an eye on the March 29 unionization vote of an Amazon warehouse at Bessemer, Alabama. Amazon is the second-largest employer in the US and its compensation and labor practices have profound effects all over the country. The company has successfully resisted unionization at its facilities in the past, but if unions were to gain a beachhead at Bessemer, it would be an early sign that labor is regaining its bargaining power, put greater upward pressure on wages, and be the setup for an inflationary spiral down the road.

In the face of a chorus on inequality, the Fed has begun to acknowledge the uneven expansion in recent years. Powell has stated in the past that he wants to see broad-based gains in employment. Black and Hispanic unemployment rates remain elevated compared to the overall rate. More progress needs to be made before the Fed considers the economy to be at full employment and pivots to tightening monetary policy. 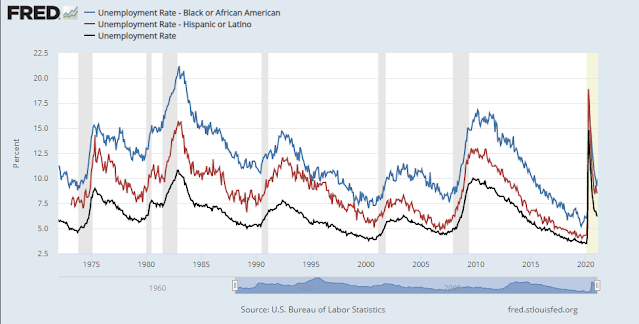 In the past, Powell has also commented on the plunging labor force participation rates (LFPR) for those without college degrees. LFPR for this demographic began widening in 1995 and it has fallen further with each successive recession. Many job seekers in this group have become discouraged and eventually gave up, leading them to stop being counted as unemployed. 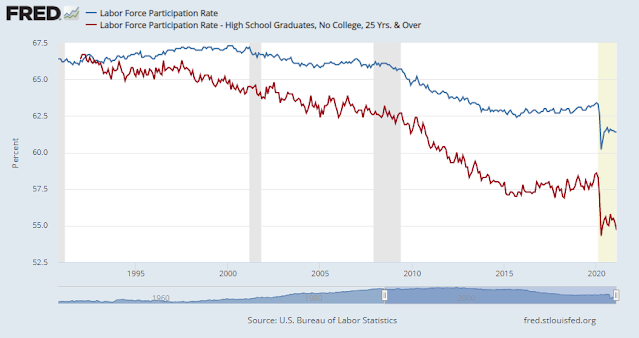 Viewed from a labor market lens, Powell’s past comments that the economy is far from normal are becoming clear. The Fed will not raise rates until it sees significant improvement in labor market internals and realized inflation rates.

Powell made it clear last week that he expects better economic growth, rising (transitory) inflation, and no rate hikes. While the Fed has an iron grip on the short end of the yield curve, it does not control the long end. In response, the yield curve steepened and the 10-year Treasury yield surged past 1.7%. 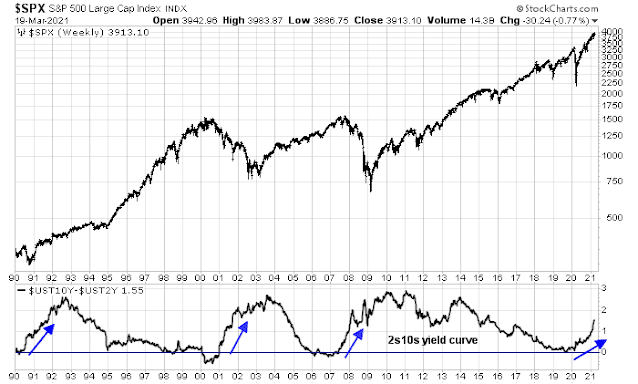 Rising bond yields and steepening yield curves are not unusual for an economy that recovers from a recession. However, there are several differences between this recovery and past recoveries.
In the past, a steepening yield curve was the mark of a stock market top. That’s because past recessions were induced by the Fed. The Fed signaled that it would tighten, and the yield curve steepened based on expectations of more rate hikes. The recession of 2020 was not induced by the Fed, but by an external event. The Fed and other global central banks flooded the system with liquidity. As the economy began to recover from the pandemic, the yield curve steepened based on the expectation of higher growth and inflation.
Rising bond yields will undoubtedly put downward pressure on P/E ratios. Indeed, forward P/E ratios have been falling in the last year. 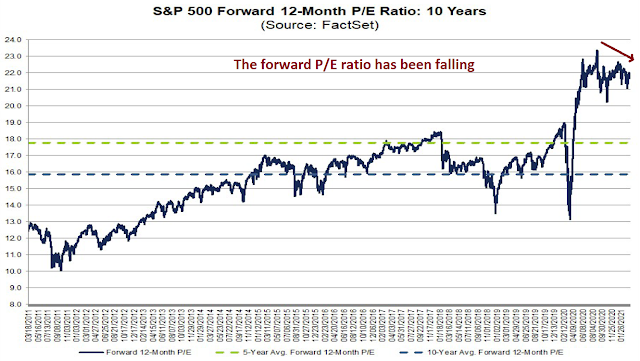 However, as long as EPS estimates are rising, the bullish effects of higher earnings will offset the bearish effects of lower P/E ratios. 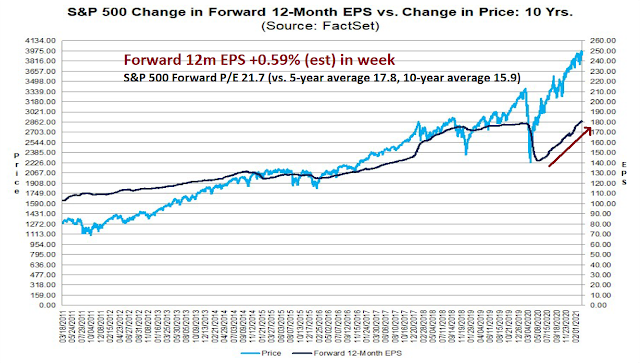 For equity investors, this has several implications. When growth was scarce during the recession, investors bid up the price of growth stocks. The growth premium is receding as economic recovery is becoming evident, and investors should focus on cyclical and value parts of the stock market.
In particular, financial stocks should be a prime beneficiary of this environment. Banks borrow short and lend long, and a steepening yield curve enhances margins. This relationship has been strong in the past. The only disconnect occurred when the sector rallied strongly owing to the Trump tax cuts, which raised banking profitability. I would add that the Fed’s announcement Friday that it was allowing the Supplemental Leverage Ratio exemption for Treasury holdings on bank balance sheets to expire on March 31 should have minimal effect on the banking sector. I had highlighted analysis from Zoltan Pozsar of Credit Suisse indicating that the large banks had ample capital cushions and SLR expiry is expected to have minimal effects on their balance sheets (see FOMC preview: Dot plot, YCC, and SLR).

The Rising Rates ETF (EQRR) is another illustration of how investors should position themselves in the current environment. While I would not recommend buying the ETF as its assets are very low and investors run the risk that it will be wound up, the underlying portfolio is heavily weighted in value and cyclical sectors, namely financials, energy, materials, and industrials. 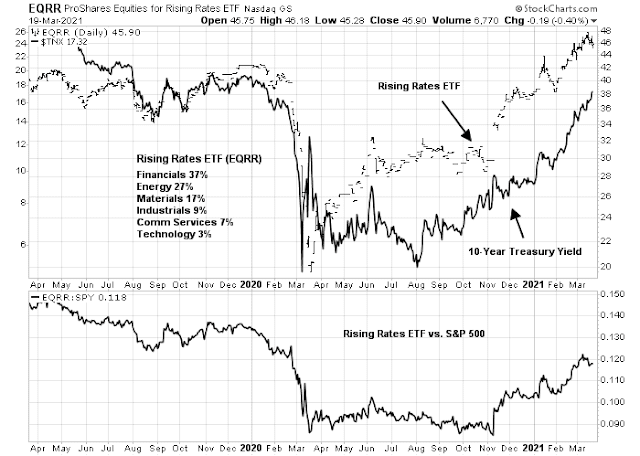 In conclusion, Powell has made it clear that growth will be strong, inflation is coming but it is expected to be transitory, the Fed will not raise rates, and it will not engage in yield curve control. No matter what happens to inflation expectations or bond yields, equity investors positioned in value and cyclical stocks should look forward to strong returns over the next 12 months.

16 thoughts on “The sum of all fears: Inflation! Inflation!”