A new trading framework – Humble Student of the Markets


The Trend Asset Allocation Model is an asset allocation model that applies trend following principles based on the inputs of global stock and commodity price. This model has a shorter time horizon and tends to turn over about 4-6 times a year. In essence, it seeks to answer the question, “Is the trend in the global economy expansion (bullish) or contraction (bearish)?” 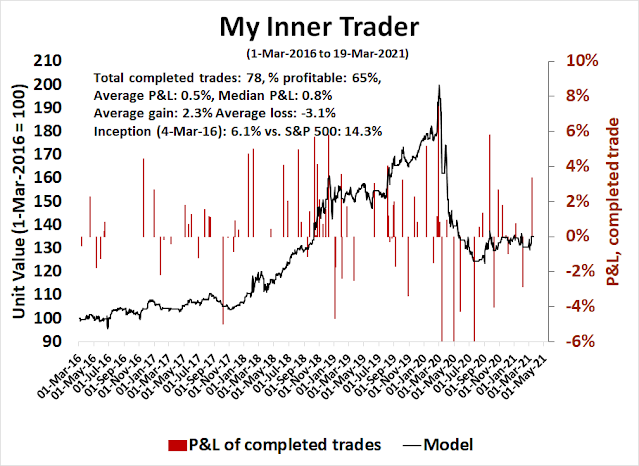 A tale of two markets

It was the best of times. It was the worst of times. This doesn’t happen very often, but the character of the stock market has made an abrupt turn recently, as evidenced by the performance disparity between the S&P 500 and the NASDAQ 100.
The weekly chart of the S&P 500 shows that it survived a brief corrective scare, but the index went on to fresh highs. By contrast, the growth-heavy NASDAQ 100 is acting like a sick puppy. NDX violated a rising trend line and last week’s rally attempt was rejected at the 50 dma level. 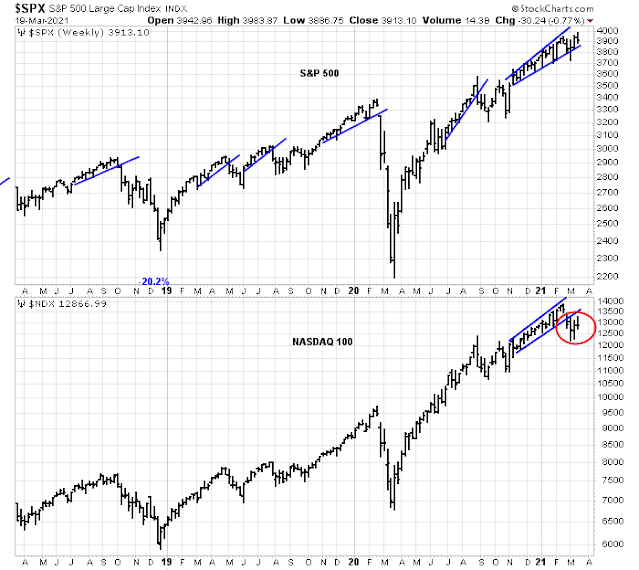 The violent change in market character, or leadership, has created a two-tiered market of extreme winners and losers. Traders need to be aware of this shift and adjust their analytical framework accordingly.

When bull market cycles mature and end, market leadership changes. This is evident with the behavior of value and growth stocks, which I have called the Great Rotation. Growth had been leading for years, but value bottomed out against growth last summer and began to turn up in late 2020. The effects of the Great Rotation can be seen by the relative strength of the Russell 1000 Value Index (large-cap value) against the S&P 500 (bottom panel). The performance turnaround of small-cap value, as measured by the Russell 2000 Value Index, was even more dramatic. 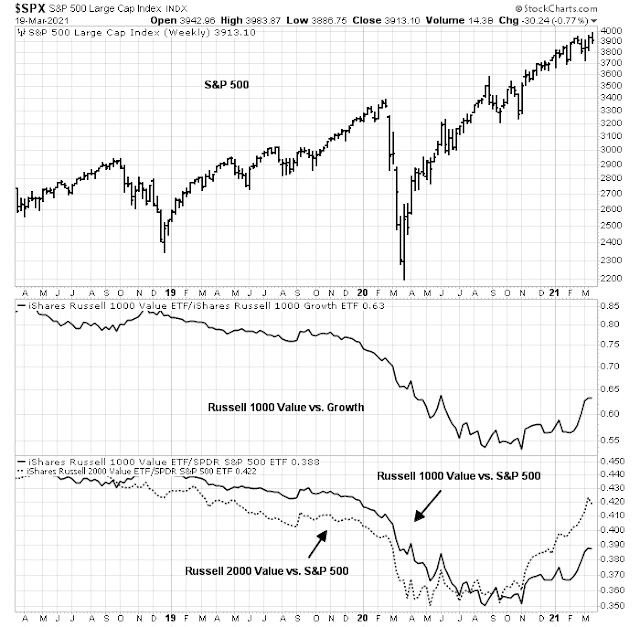 In light of these changes in market leadership, the task of analyzing overall market direction, as measured by the S&P 500, becomes especially challenging. Traders are advised to separate the performance of growth and value stocks separately in order to get a clearer view of the technical picture.

Let’s begin with growth stocks, which is proxied by the NASDAQ 100 (NDX). From a technical analysis perspective, the growth stock outlook can be analyzed using NASDAQ-only breadth and momentum indicators in order to separate the action of growth and value stocks.
NDX bounced off an area of major support while exhibiting a positive 5-day RSI divergence in early March. The index was also oversold as measured by the percentage of stocks above their 50 dma. The rally met but couldn’t overcome overhead resistance at its 50 dma and the index has since pulled back. 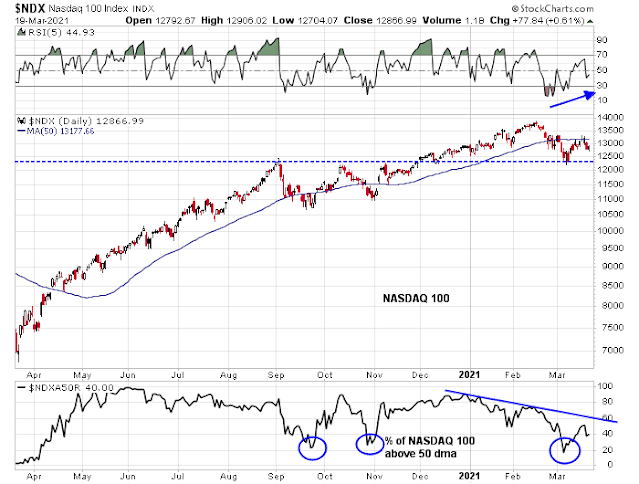 The bull case is speculative risk appetite remains intact. Bitcoin prices are highly correlated to the relative performance of the ARK Innovation ETF to the S&P 500. In the short-term, this is a bullish divergence supportive of better returns.

On the other hand, the relative performance of NDX is inversely correlated to bond yields. The 10-year Treasury yield has surged above 1.7%, which has to put downward pressure on the attractiveness of growth stocks.

Is this bullish or bearish for growth stocks? Call it a wash. It’s difficult to discern a strong tradable signal for growth stocks, other than to observe that they are in an intermediate-term relative downtrend.

Even as growth stocks struggled, value stocks have performed much better. While the relative performance of large-cap value and growth can be measured by the Russell 1000 Value and Russell 1000 Growth Indices, one quick proxy for value and growth would be the relative returns of the Dow against the NASDAQ 100.
The Russell 1000 Growth Index (bottom panel) staged an oversold rally that was halted at the 61.8% Fibonacci retracement resistance level. By contrast, the Russell 1000 Value (middle panel) continues to grind upwards. In short, value stocks are in a well-defined uptrend while growth stocks have faltered. 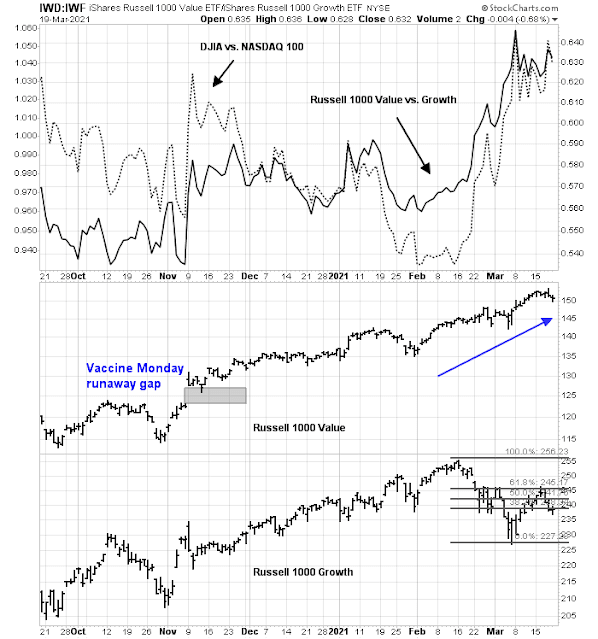 The established strength of value stocks makes a “buy the dip” strategy an attractive proposition for traders. The NYSE McClellan Oscillator (NYMO) made a double oversold bottom in late February and early March and the S&P 500 subsequently rallied. NYMO readings have come off the boil and retreated off a near-overbought condition. I interpret this as a constructive intermediate-term bullish condition for value stocks. 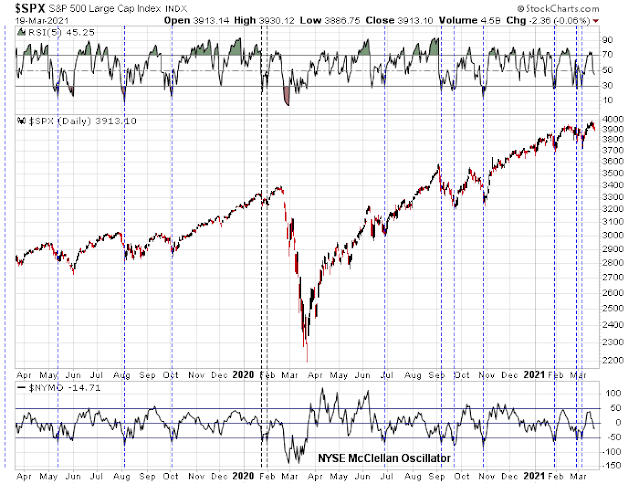 In the short-run, the price weakness seen late last week makes the S&P 500 ripe for a relief rally. 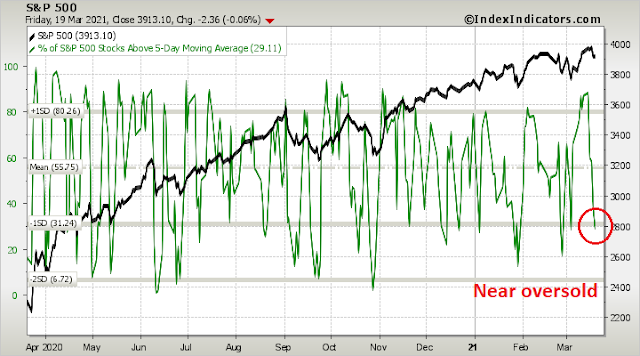 Short-term breadth for the DJIA. which as a proxy for value and cyclical stocks, are flashing a similar oversold reading. Expect market strength during the first half of the week. 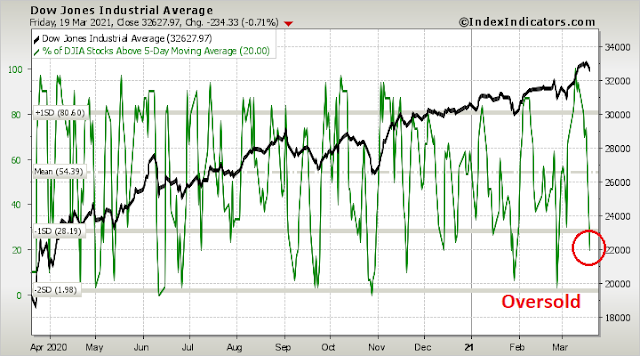 In conclusion, the character of market leadership has shifted dramatically, leading to a two-tier market. There is no longer a single stock market, and technicians need to analyze growth and value stocks separately. Growth stocks have been struggling and should generally be avoided. Value stocks are in an intermediate-term uptrend, and traders should adopt a “buy the dip” strategy. Current technical conditions for value are nearing an oversold reading, and the risk/reward for value bulls appear favorable in the coming week.
My inner investor is bullishly positioned mainly in value and cyclical stocks. My inner trader is tactically long small-cap value stocks, which have been the recent market leaders.
Disclosure: Long IJS

46 thoughts on “A new trading framework”