As the markets remain in risk-on mode, readers should be aware of several lurking risks that may appear from the FOMC meeting. Undoubtedly, Powell will repeat his dovish mantra that the Fed is a long way from neutral and policymakers are focused on the labor market. 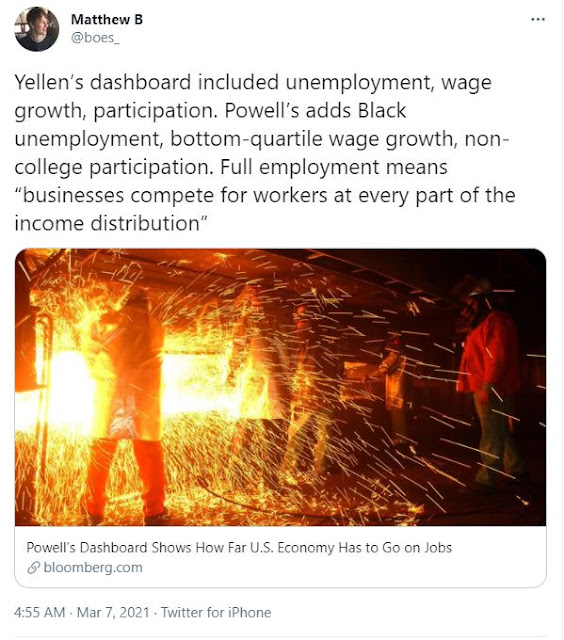 Nevertheless, here is what I am watching:

On Wednesday, the FOMC will release its SEPP, or “dot plot”, of interest rate expectations by members. Fed Funds futures is almost pricing in a full rate hike by the end of next year. What will the “dot plot” say? 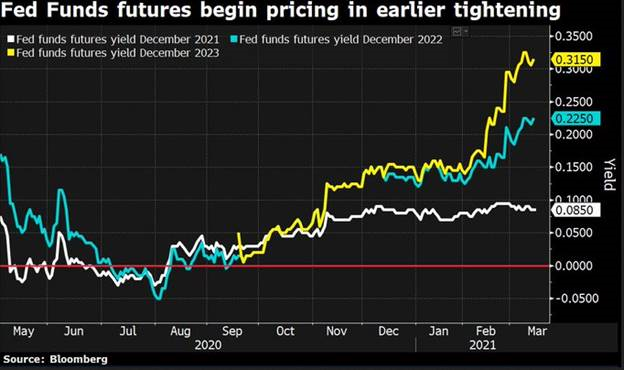 The Fed will likely not signal a 2023 rate hike at this week’s meeting. Doing so would call into question the Fed’s commitment to the new policy framework…It would begin the rate hike discussion before the tapering discussion.

Also, keep an eye on the long-term neutral rate. In the past, this rate has acted as a ceiling for the 10-year Treasury yield. 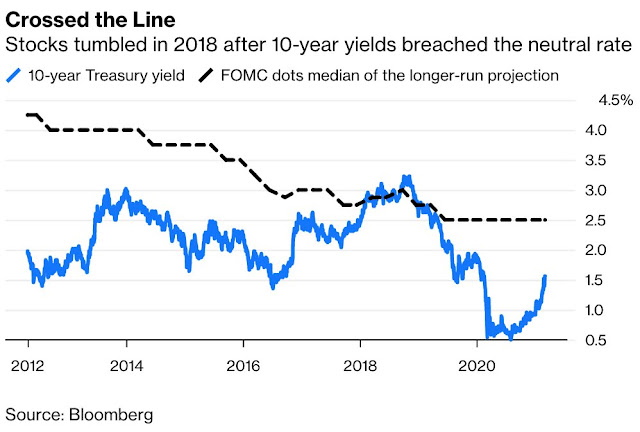 Based on this model, it is unlikely that the Fed will act or even hint at yield curve control. This is important for financial stocks as the shape of the yield curve determines banking profitability (borrow short, lend long). In the past, the relative performance of this sector has been closely tied to the shape of the yield curve. The only major divergence occurred when the market rallied in anticipation of Trump’s corporate tax cuts, which boosted banking profitability.

Any hint of yield curve control would dent the performance of financials and create a headwind for a significant portion of value stocks.

Then there is the key question of the Supplementary Leverage Ratio (SLR), which is an important component of the plumbing of the credit market. Here is an SLR primer from Bloomberg’s Katie Greifeld:

The latest acronym on Wall Street’s mind is SLR: the supplementary leverage ratio. In normal times, SLR required U.S. banks to hold a minimum level of capital against their assets as a buffer against losses. However, the Federal Reserve exempted Treasuries and deposits at the central bank from those requirements roughly a year ago. Banks took advantage, with balance sheets ballooning by as much as $600 billion as a result of the regulatory relief. 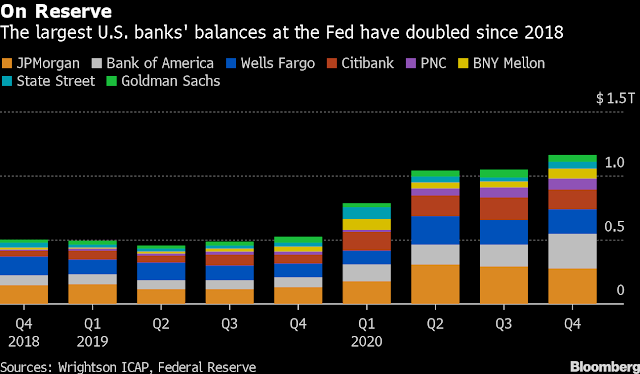 SLR exemption relief is expected to expire on March 31, 2021. Leading Democrats are adamant against extending the deadline. Elizabeth Warren and Sherrod Brown wrote a letter to U.S. regulators which described extending SLR relief as a “grave error.”
The Treasury market is becoming spooked. Dealer Treasury inventories plummeted last week, possibly in anticipation that SLR relief would not be extended. 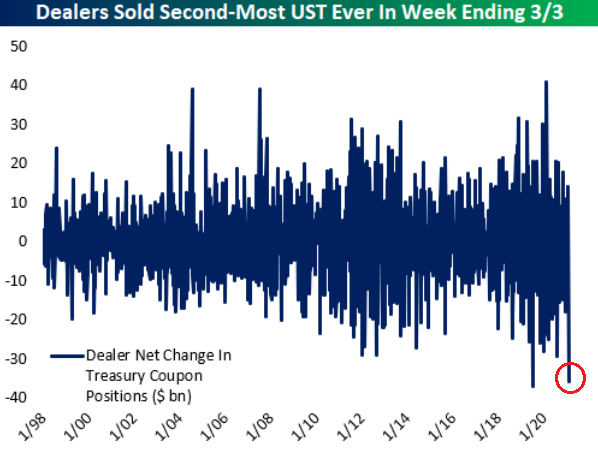 Without SLR relief, some analysts, such as Nordea Bank have speculated that the market could see a mass liquidation of up to $700 billion of Treasury holdings. 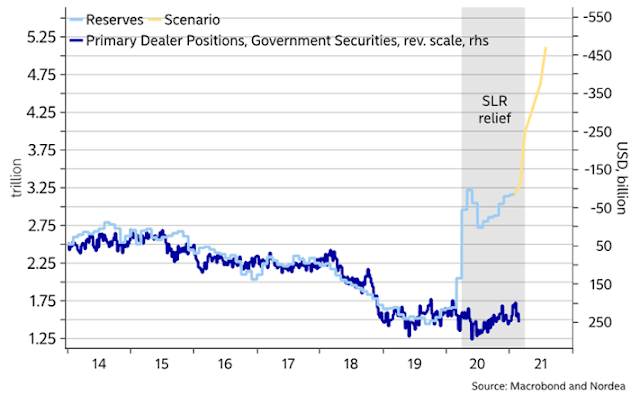 Adam Tooze is more relaxed about the prospect of an SLR panic. He pointed to analysis by Zoltan Pozsar of Credit Suisse which showed that large banks have significant capital cushions if SLR exemption expires. 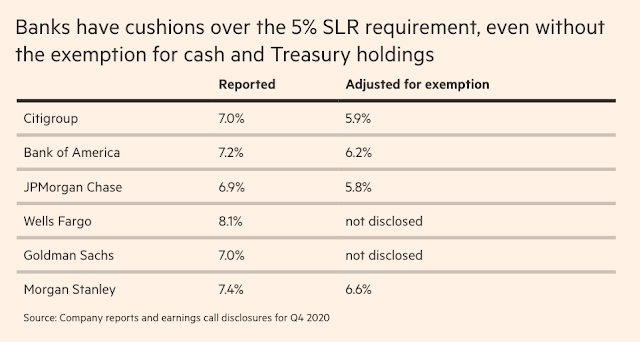 If there is an earthquake in the money markets or credit markets as a consequence of SLR exemption expiration, the Fed will act to mitigate the damage.

If Pozsar thinks it is incoherent as an overall strategy for G-SIBs [large systemically important banks], if JP Morgan doesn’t think it is risky, if Warren and Brown think it is bad politics and, if the FDIC would have to reverse itself, then, despite worries about Treasury market panics, the SLR exemption should be allowed to expire.
If there is turmoil in the repo market, what we have learned from September 2019 and March 2020 is that given our market-based financial system, there is no alternative but for the Fed to intervene as the first responder. No amount of private balance sheet capacity will make a significant difference and it is better to keep the risks out of the G-SIB balance sheets.
If we do need Fed intervention, it should be massive and prompt and avoid the market plumbing becoming a political issue. The September 2019 and March 2020 panics were buried. No reason, if necessary, not to bury interventions in 2021.

In other words, don’t turn all Zero Hedge Apocalyptic on the prospect of SLR expiry. CTA hedge funds are already in a crowded short position in bonds. Any positive surprise has the potential to spark a “rip your face off” bond rally. 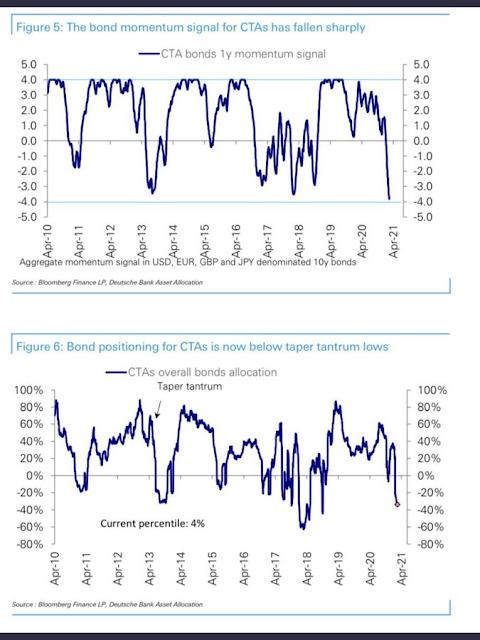 In summary, there are several risks that investors should be aware of ahead of the FOMC meeting. My tentative conclusion is we should see a dovish response from the Fed. While these risks do exist and they are always present, the anticipation of any pain may be worse than the event itself.

If the markets turn risk-off ahead of the FOMC announcement, don’t be afraid to buy the dip.