MoMo is losing its mojo – Humble Student of the Markets

Mid-week market update: About a month ago, I warned that the market was undergoing a regime shift from growth to value (see What would Bob Farrell say?) and compared today’s Big Tech momentum stocks, not to the dot-com mania, but the Nifty Fifty era. On the weekend, I rhetorically asked in a tweet that if Bloomberg TV has to explain r/WSB lingo to its audience, it’s probably a sign that speculative momentum was nearing the end of its run. 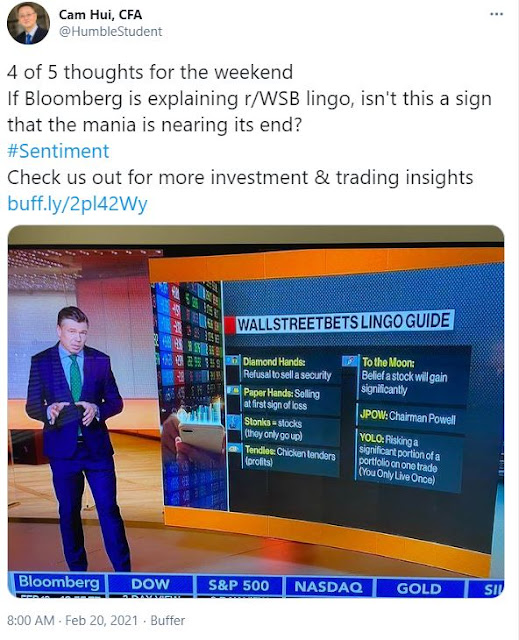 It finally happened this week. The MoMo (momentum) crowd is losing its mojo. The price momentum factor, however it’s measured, is undergoing a sharp correction. 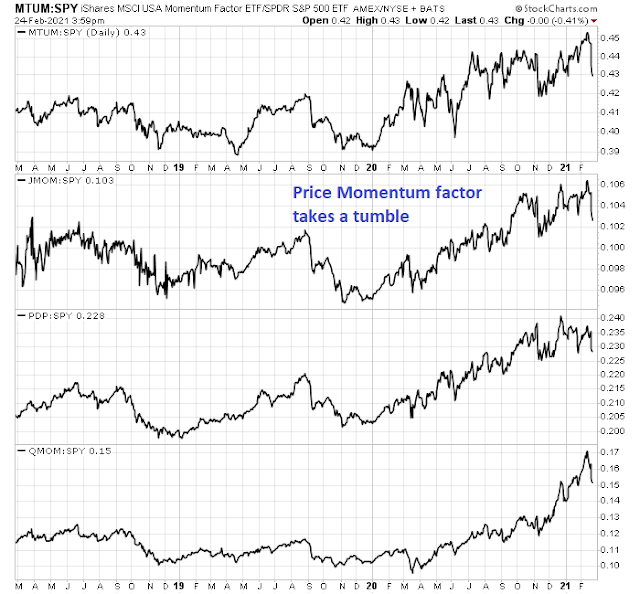 Here is what that means for the stock market.

A growth to value rotation

The S&P 500 tested its 50-day moving average (dma) yesterday and recovered. Beneath the surface, however, a strong rotation from growth to value is evident. The growth-heavy NASDAQ 100 (NDX) was not as lucky as the S&P 500 as it violated an important rising trend line. As well, its relative performance breached a rising trend line, and so did the high-flying ARK Innovation ETF (ARKK). The technical deterioration was foreshadowed by a negative divergence in the percentage of NASDAQ stocks above their 50 dma indicator. 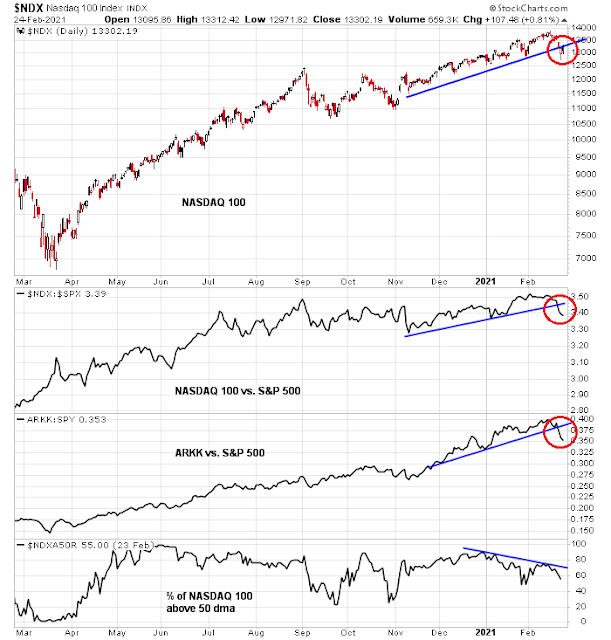 The growth to value rotation can also be seen in the relative performance of different large and small-cap growth and value indices, which are either testing or violating key relative technical support levels. 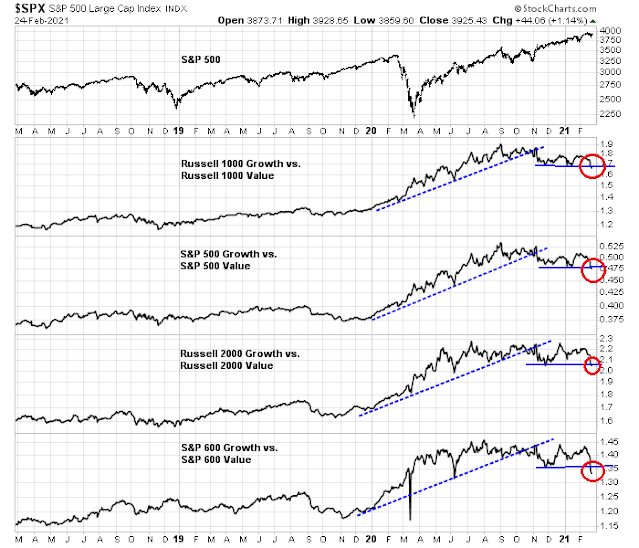 The failure of price momentum and growth to value rotation should translate to a minor headwind for stock prices. The weight of Big Tech growth is roughly 45% of S&P 500 weight, while cyclical stocks account for about 20%, and value sectors 30%. Weakness in Big Tech growth should create mild downward pressure on the S&P 500. 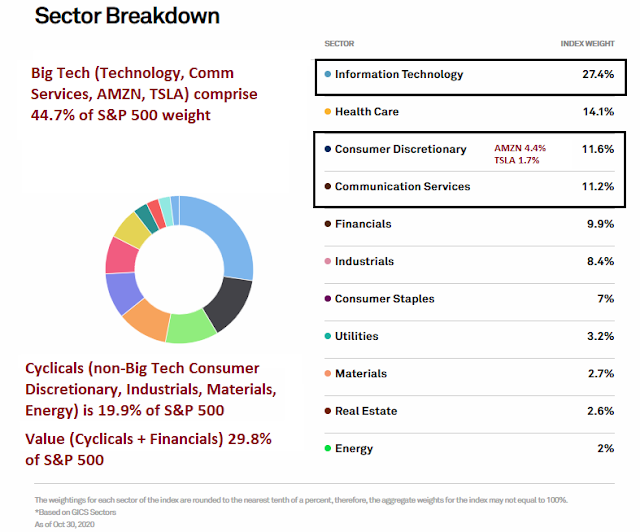 Cathie Wood’s ARKK saw investors pull $465 million from its fund on Monday (ARKK reports flows t+1 so we won’t know Tuesday’s flows until after the close Wednesday). The redemption was the first major outflow during a period of heavy inflows. 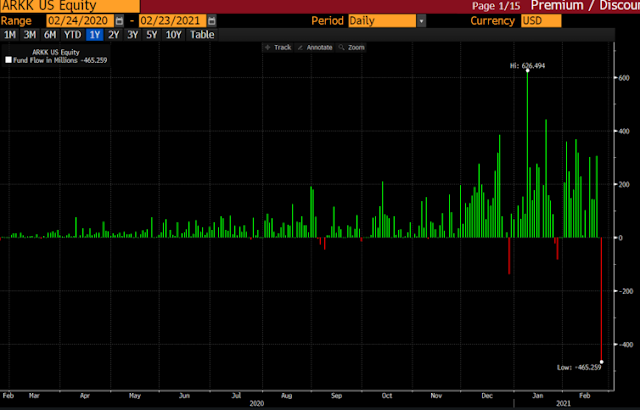 Here is the risk to the fund. ARKK holds a number of large illiquid positions, measured as a percentage of outstanding shares, in a variety of small and micro-cap stocks. These positions are known on a daily basis. Should the momentum sell-off continue, these illiquid positions are juicy targets for hedge fund bear raids where they drive down the stocks through short sales. Such bear raids have the potential to spark a stampede out of ARKK, which will have to sell its most liquid positions first, such as TSLA, followed by the less liquid ones. This could translate into a flash crash style panic in growth stocks, and small-cap growth in particular.

Downward pressure on growth stocks, which comprise about 45% of the S&P 500, will create significant headwinds on the S&P 500. To be sure, funds are rotating into value stocks, but since value sectors only make up 30% of the index, this will be bearish for the index overall.

I am not forecasting a stock market crash, though a crash in growth stocks is a possibility depending on how the animal spirits behave. For some sense of scale, the asset size of Fidelity’s Contrafund dwarfs ARKK. The effects of any growth crash will likely be contained. 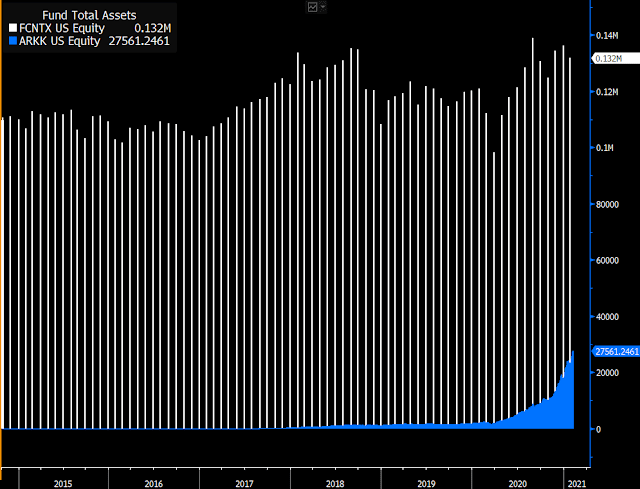 In conclusion, the market is undergoing a rotation from growth to value, which also manifests itself as a failure of price momentum. This will put minor downward pressure on stock prices. Expect a choppy sideways to down market environment in the next few weeks, but no major downdraft in the S&P 500.

This is consistent with the pattern found by Ryan Detrick, who observed that the stock market tends to have a minor bearish bias in March when a new party takes control of the White House.

As well, II sentiment is recycling from a bullish extreme, which is a constructive development as the market undergoes an internal rotation. 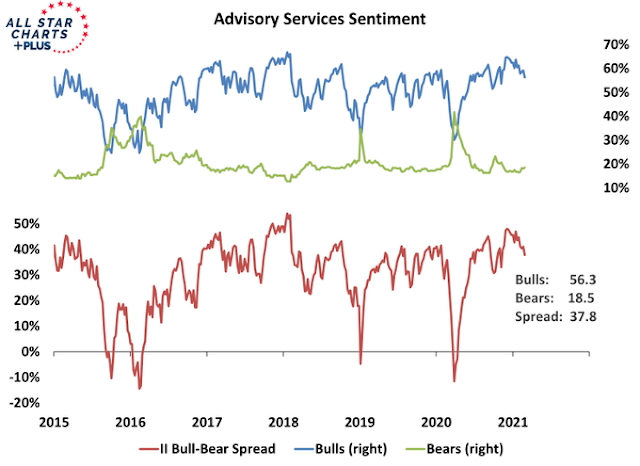 However, hedge fund positioning is at a crowded long and could use a reset. A retreat in growth stocks may be the catalyst for a normalization in equity sentiment. 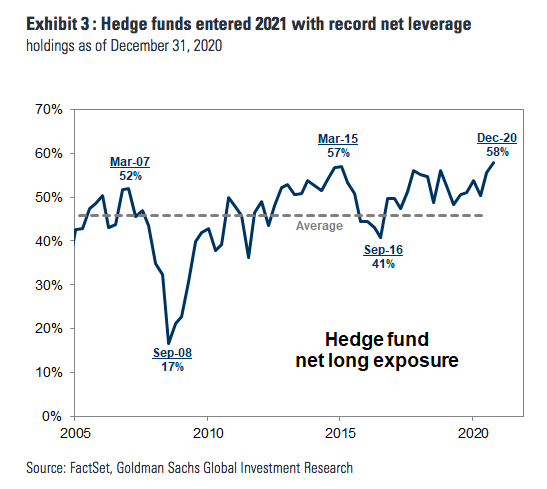 My base case scenario calls for a choppy month of March, with downside potential limited to -5% or less.

38 thoughts on “MoMo is losing its mojo”