Will rising yields sideswipe equities? – Humble Student of the Markets

Jerome Powell’s Congressional testimony last week made the Fed’s position clear. Monetary policy will remain easy for the foreseeable future. Inflation dynamics change, but not on a dime. While Fed policy will leave short-term interest rates anchored near zero, the market’s inflation expectations have been rising. Last week, the 10-year Treasury yield briefly breached 1.6% and the 30-year Treasury yield rose as high as 2.4%. 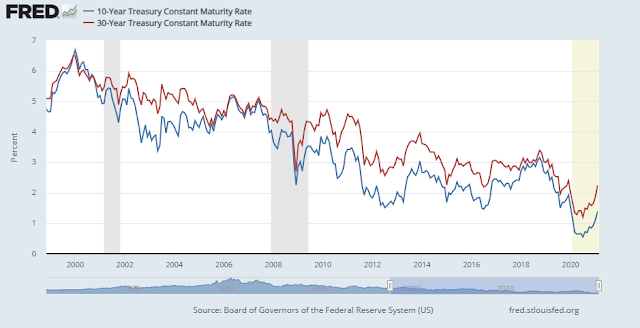 If interest rates are rising on the heels of reflation and real growth, that is positive for risk assets. In the last few decades, when interest rates have risen, it has been due to real growth. The markets have shown they are willing to tolerate the Federal Reserve’s suppression of interest rates in such a scenario.
But if interest rates are rising because of faster inflation, then that is not good for risk assets. All else being equal, inflation depresses real economic growth and earnings as purchasing power dwindles. During the inflationary period from 1966 to 1982, stocks lost 65% of their real (after-inflation) value as inflation raged. These real losses were not recouped until the mid-1990s. Inflation has not been a problem since the 1990s. 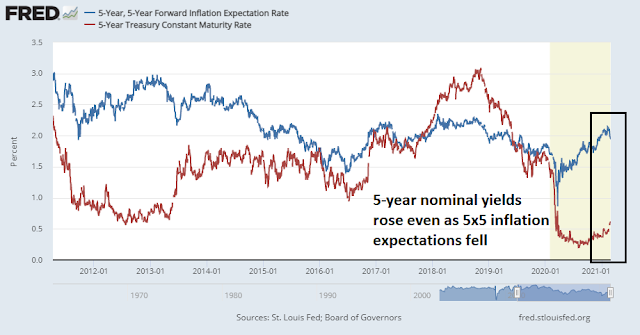 The yield curve is equally revealing. While the market has mainly been focused on the widening spread between the 10-year and 2-year Treasury yield (red line), or the 2s10s curve, the spread between the 2-year and 3-month (blue line) has been flat. The difference in yield curve behavior is reflective of differing expectations. While the market expects longer-term inflation pressuring rates to rise, it doesn’t expect a significant change in short rates over the next two years. 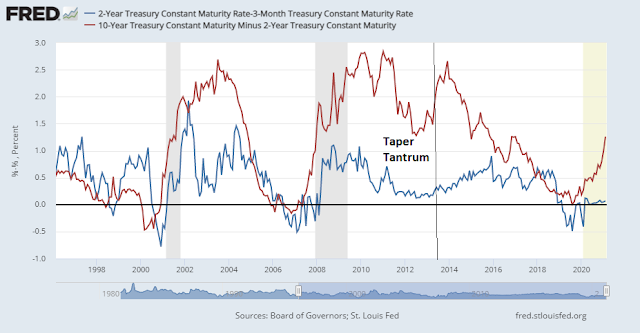 Contrast the current circumstances with the “taper tantrum” of 2013, when Fed chair Ben Bernanke openly wondered when the Fed might taper its QE purchases. Both yield curves were steepening then.
The commodity markets are telling the same story. The ratio of gold to CRB is falling while the copper to gold ratio is rising. These are all indications that the market believes the forces of cyclical reflation are dominant over inflation. 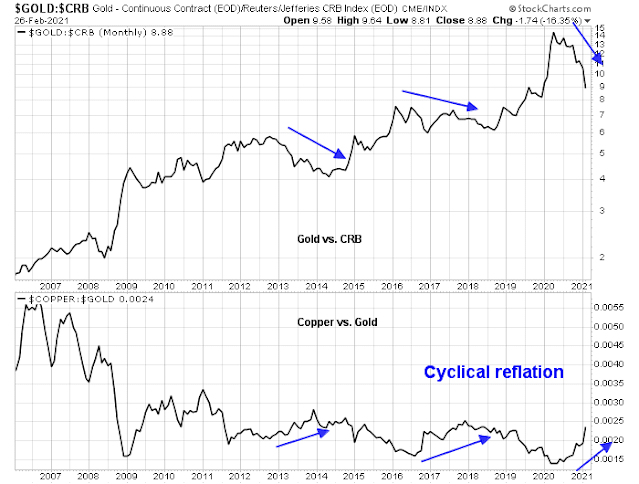 Other signs indicate reflation is on the way in Q2. The combination of rising vaccinations, warmer weather, fiscal stimulus, and a flood of liquidity to spark a YOLO (You Only Live Once) recovery. Vaccine deliveries are rising, which is positive, and warmer weather has shown itself to lessen the effects of the pandemic.
Bloomberg offered a tantalizing account of what may happen as the pandemic recedes using the model of Australia and New Zealand, which have acted to effectively control the virus.

Australia and New Zealand’s success in suppressing Covid-19 — outside isolated flare-ups — has sparked a snap-back in household and business sentiment, spurring activity and hiring and laying the ground for a sustained recovery. With vaccines being rolled out across the developed world, the prospect of a return to normal is tantalizingly within reach.
Households Down Under are cashed up due to government largess and limited spending options during their respective lockdowns. That prompted Aussies and Kiwis to salt away funds, freeing up room to consume.
“Substantial fiscal boosts, combined with an internalization of spending has driven a sharp rebound in spending by households in Australia and New Zealand,” said James McIntyre of Bloomberg Economics in Sydney. “Rising asset prices are delivering a further boost. But both economies could see recoveries whither as fiscal boosts fade and borders reopen.”

More importantly, Bloomberg reported in a separate article that the US Treasury is drawing down its account at the Fed, which will unleash a tsunami of liquidity into the banking system.

The Treasury’s decision — unveiled at its quarterly refunding announcement — will help unleash what Credit Suisse Group AG analyst Zoltan Pozsar calls a “tsunami” of reserves into the financial system and on to the Fed’s balance sheet. Combined with the Fed’s asset purchases, that could swell reserves to about $5 trillion by the end of June, from an already lofty $3.3 trillion now.
Here’s how it works: Treasury sends out checks drawn on its general account at the Fed, which operates like the government’s checking account. When recipients deposit the funds with their bank, the bank presents the check to the Fed, which debits the Treasury’s account and credits the bank’s Fed account, otherwise known as their reserve balance. 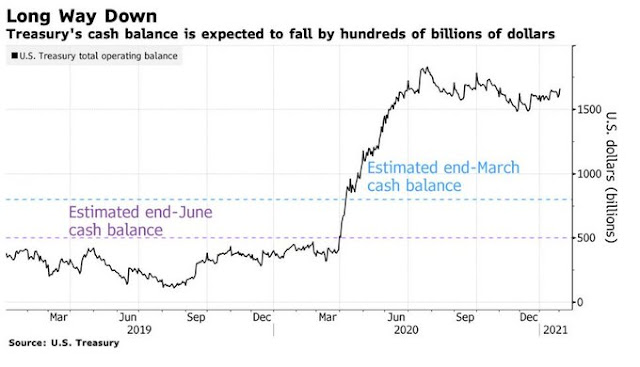 The flood of liquidity will have several effects. First, it could push short-term interest rates below zero, as Treasury has fewer needs to issue Treasury bills as it draws down its cash balance at the Fed. Watch for the Fed to announce that it will raise the rates it pays on excess reserves (IOER) to offset the downward pressure on short-term yields. If it does, don’t misinterpret this as tightening. It is only a technical change to the plumbing of the money market to prevent short-term rates from going negative.

The next question is what will happen to the billions as Treasury injects cash into the banking system. A rising tide lifts all boats, and undoubtedly some of the funds will find a home supporting consumer spending, and some will support stock prices. This development should be net equity bullish.

In the short-run, reflation is dominating the fundamental narrative. During the initial phase of an economic recovery, both earnings estimates and bond yields rise together. Equity prices rise because the bullish effects of rising earnings estimates overwhelm the bearish valuation effects of rising yields. Indeed, Ed Yardeni pointed out that forward S&P 500 revenues and sales are enjoying a V-shaped recovery. 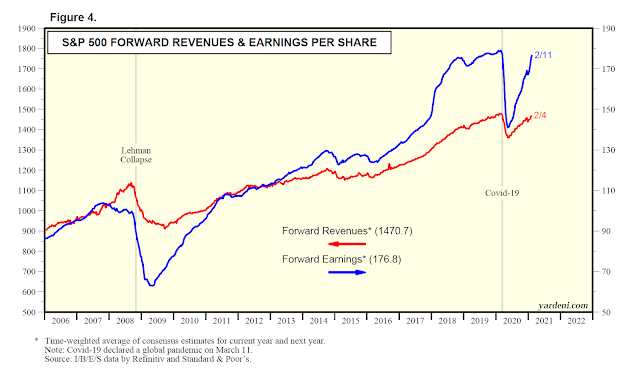 Equity valuations are not demanding from a long-term perspective. Using a 10-year CAPE to calculate the equity risk premium, stock prices are not excessively expensive even with an elevated 10-year Treasury yield. 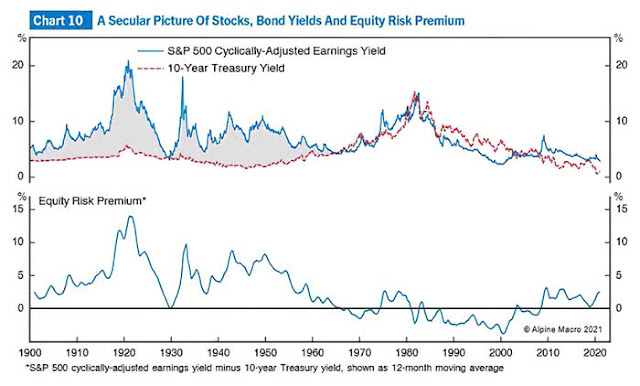 As well, Marketwatch reported that RBC strategist Lori Calvasina observed that the stock market behaves well when the rise in the 10-year Treasury yield is less than 2.75%. 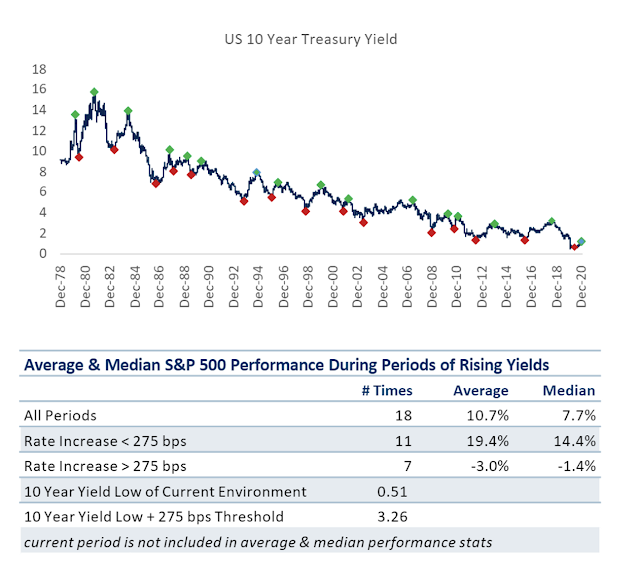 In short, equity investors shouldn’t worry about rising inflation expectations and bond yields – at least not yet.

When does the party end?

In conclusion, investors need to distinguish between different phases of the rising rate cycle. There is the reflation phase, which is equity bullish, and the inflation phase, which creates headwinds for equities as central banks tighten the economic cycle. We are currently in the reflation phase, which is very equity bullish.
Here is a clue of when the transition might occur. A Bloomberg interview with former New York Fed President Bill Dudley provided some clues. Dudley was one of the triumvirate of monetary policy under the Yellen Fed, and his views reflect the mainstream of Fed thinking. In the interview, Dudley revealed that the Fed will find it difficult to avoid a taper tantrum in late 2021 or early 2022. Mark that in your calendar. Even with a taper tantrum, it doesn’t necessarily mean the equity bull market is over. It will only mean the market will enter a new phase.
Until then, financial conditions are highly expansionary and the Fed is determined that it stay that way. 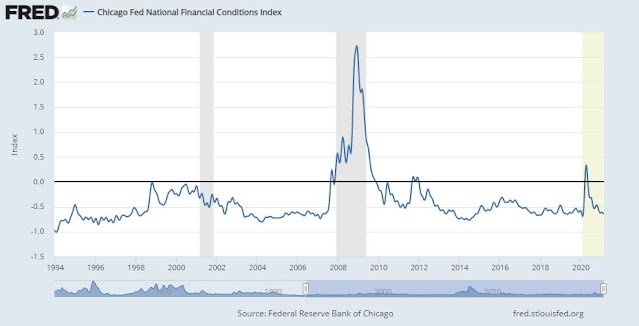 Global liquidity is rising, which should be supportive of more stock market advances. The forecast from this model indicates a gain of 31.2% from the MSCI All-Country World Index. 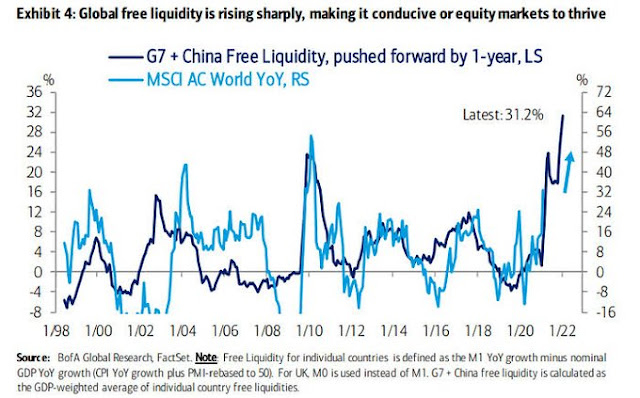 Moreover, stock market valuations aren’t overly stretched based on the equity risk premium even with higher Treasury yields, according to Goldman Sachs.

Investors ask whether the level of rates is becoming a threat to equity valuations. Our answer is an emphatic “no.” Although the S&P 500 forward P/E multiple of 22x currently ranks in the 99th historical percentile since 1976, ranking only behind the peak of the Tech Bubble in 2000, our dividend discount model (DDM) implies an equity risk premium (ERP) that ranks in the 28th percentile, 70 bp above the historical average. Similarly, even after the recent rise in yields, the 300 bp gap between the S&P 500 forward EPS yield of 4.6% and the 10-year US Treasury yield ranks in the 42nd historical percentile. Keeping the current P/E constant, the 10-year yield would have to reach 2.1% to bring the yield gap to the historical median of 250 bp. If instead the yield gap remains unchanged, and rates rise to 2.0%, then the P/E multiple would fall by 10% to 20x. But in today’s economic environment, our macro model suggests the ERP should be narrower than average. 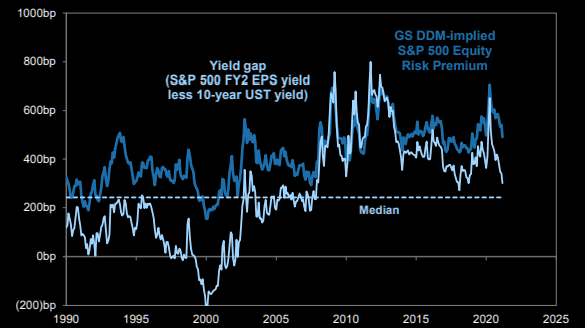 Relax, and enjoy the party.