What would Bob Farrell say? – Humble Student of the Markets

What would the legendary market analyst Bob Farrell say about today’s markets? I was reviewing the patterns of factor returns recently, and I was reminded of three of Farrell’s 10 Rules of Investing (which are presented slightly out of order).

Rule 3: There are no new eras – excesses are never permanent.
Rule 2: Excesses in one direction will lead to an opposite excess in the other direction.
Rule 4: Exponential rapidly rising or falling markets usually go further than you think, but they do not correct by going sideways.
Applying those principles to the return patterns to growth and value over the last 20 years, we can see that growth has peaked out relative to value in 2020 (Rules 2 and 3). 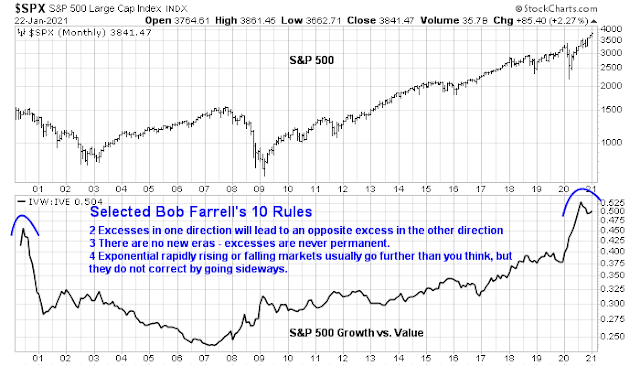 Does that mean that this is the end of an era for growth stocks? Large-cap growth stocks comprise roughly 45% of the weight of the S&P 500. If they were to falter, does this mean investors are facing a major market top?
What would Bob Farrell say?

While Farrell’s 10 Rules is silent on the specifics of today’s FANG+ leadership, they were not silent on investor psychology. One thing is certain, investors are prone to recency bias, and the most likely parallels they might make is the dot-com bubble of the late 90’s. I beg to differ.
The mania of the late 90’s was characterized by a flood of unprofitable companies coming to market. I remember sitting through endless presentations of new companies with the mantra of “We expect to be EBITDA positive in two years, and earnings positive in three.” Even paper and forest products companies would not dare go into an institutional presentation without outlining a “broadband strategy”.
By contrast, today’s FANG+ stocks tend to be cash flow generative and have substantial competitive advantages, or moats. A more fitting analogy to the recent FANG+ leadership is the Nifty Fifty era of the early 70’s.
The Nifty Fifty era was characterized by a “growth at any price” mentality. The investment thesis was to buy good growth stocks and hold them – forever. The blogger writing under the pseudonym Jesse Livermore recently performed a masterful analysis of the Nifty Fifty using the O’Shaughnessy Asset Management (OSAM) database. He took the Nifty Fifty list as of 1972 and analyzed the history from 1963 to 2020. Most of the survivors today have mature growth paths, the key theme of strong competitive moats is emerging from the analysis. Large-cap survivors include pharmaceuticals, along with selected consumer-oriented companies who have been able to maintain their branding (P&G, Disney, Coke, McDonald’s). 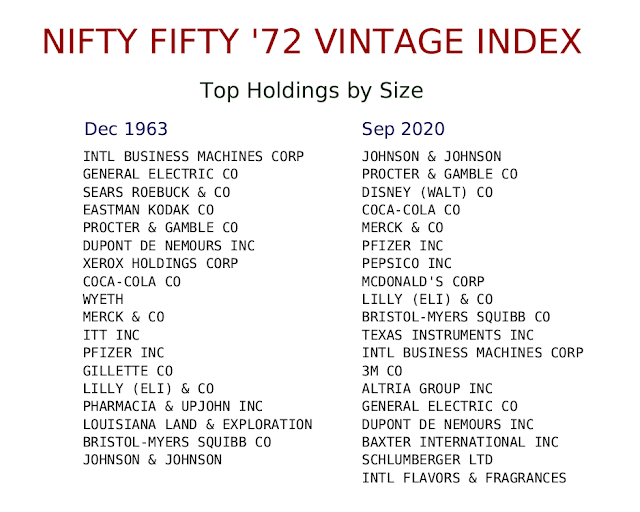 The key similarity between the Nifty Fifty list and the FANG+ list today is their competitive moats, as characterized by their ability to maintain high margins. Companies in industries with high margins will attract competitors. They will not survive unless they have strong competitive positions.

However, good companies don’t necessarily make good investments. Despite their strong levels of profitability, Nifty Fifty stocks peaked out in relative performance in the early 70’s and never looked back.

The analysis of P/E multiples tells the story of performance. Nifty Fifty stocks began as highly valued. Multiples collapsed when the investment theme peaked, and normalized to market levels starting in the early 80’s.

I don’t mean to leave the impression that all of the Nifty Fifty were successful investments. A glance at the top losers reveals companies that lost their competitive moats. Technology companies were at the greatest risk of this (IBM, Digital Equipment, Unisys, Xerox). 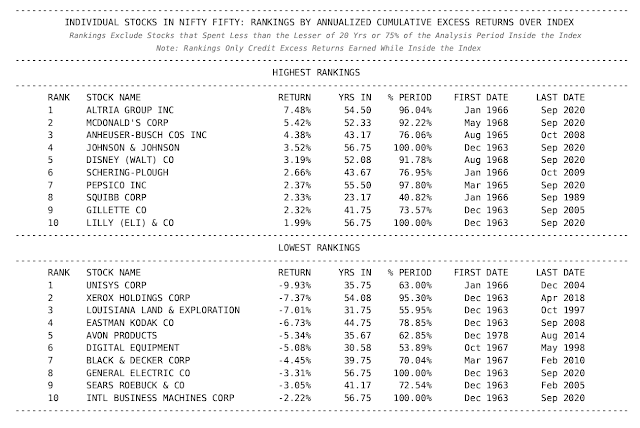 Take what happened in the wake of the internet bubble bursting, for example. From the stock market’s March 2000 high to its October 2002 low, according to data from Dartmouth’s Ken French, the 10% of all publicly traded stocks closest to the value end of the spectrum outperformed the 10% closest to the growth end by more than 22 annualized percentage points—though they still lost ground on average. But small-cap value stocks—as represented by the Russell 2000 Value Index—actually rose slightly during that bear market.

However, the length and magnitude of the gains of FAANGM stocks suggests that these issues are due for a secular top. 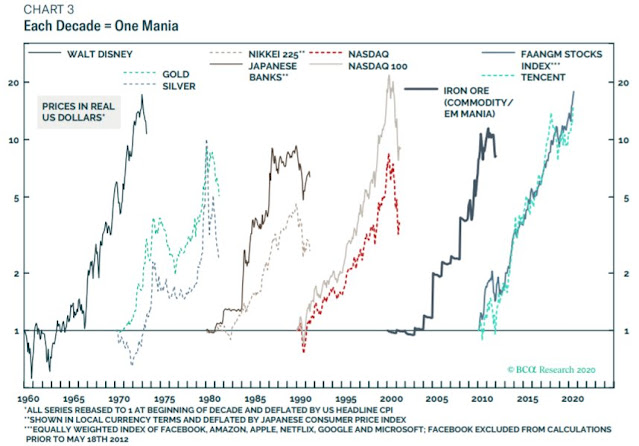 Where does that leave us? The weight of the evidence suggests that US large-cap growth stocks are turning down, and their secular bear is just beginning. Value is just starting its cycle of outperformance, and investors should tilt their portfolios towards out-of-favor value stocks.
Investors who would like exposure to growth can look outside the US, such as the tech-heavy Asia 50 (AIA) or Emerging Markets eCommerce and Internet ETF (EMQQ). Both of these ETFs have turned up relative to the NASDAQ 100. 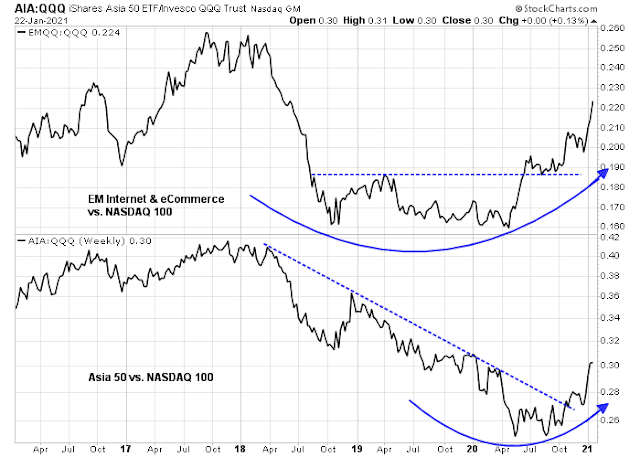 17 thoughts on “What would Bob Farrell say?”