When new highs aren’t bullish – Humble Student of the Markets 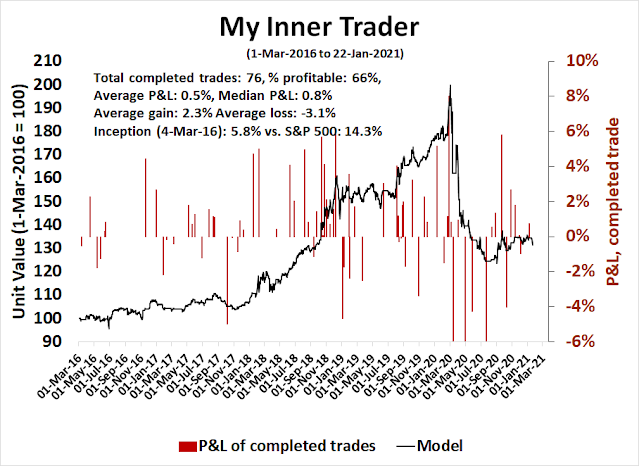 An exception to the rule?

The S&P 500 rallied to a fresh all-time high last week. While it is said that there is nothing more bullish than a market making new highs, this may be an exception to that rule, especially when there were more declines than advances on the day of a new high.
The S&P 500 kissed the top of a rising channel while exhibiting a negative 5-day RSI divergence. In addition, the VIX Index, which tends to be inversely correlated to stock prices, is testing a key support level at 20-21. More worrisome is the behavior of financial stocks. Large-cap banks reported last week and most beat expectations, but the entire sector is lagging the market. 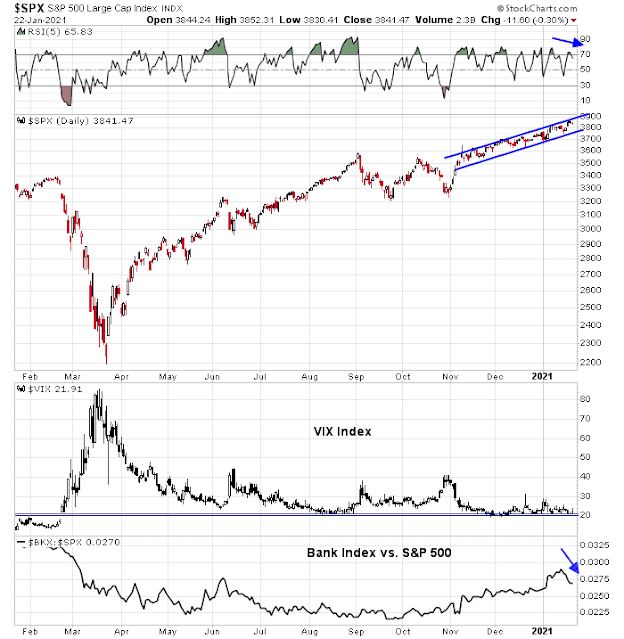 Sentiment readings have been extended since last 2020. The latest data point from NAAIM, which measures RIA sentiment, reached a record high of 113. While sentiment models are less useful at tops than bottoms (shaded areas), the last time the NAAIM Exposure Index neared these levels was the melt-up of late 2017 and early 2018. 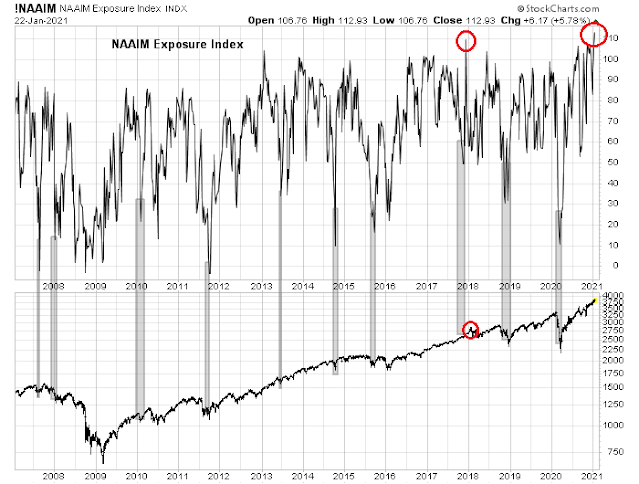 These sentiment readings are consistent with the BoA Fund Manager Survey, which showed risk appetite at record levels. 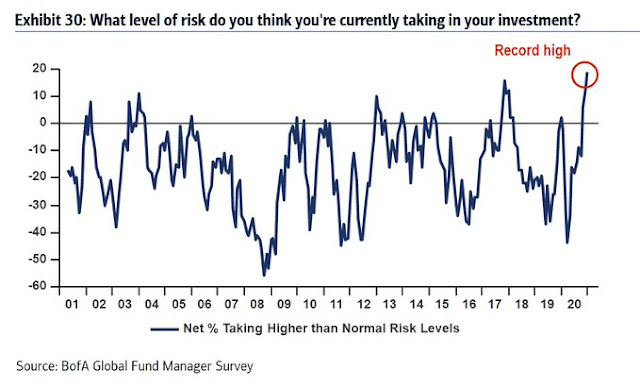 As well, the Globe and Mail reported that BoA strategist Savita Subramanian observed that their “Sell Side Indicator”, which measures the risk appetite of Street strategists, is nearing a sell signal.

Sentiment has been getting more euphoric, as our Sell Side Indicator – a contrarian sentiment model – is at the closest level to the “Sell” threshold since the financial crisis.

The 10-day moving average of the equity-only put/call ratio is nearing its lows again, indicating excessively bullishness. At a minimum, recent low reading episodes have resolved themselves in pullbacks.

One of the bright spots for the market bulls could be Q4 earnings season. FactSet reported the good news: Both EPS and sales beats are strong and above historical norms. Company analysts are revising their EPS estimates upwards, which should be a sign of strong fundamental momentum and bullish. 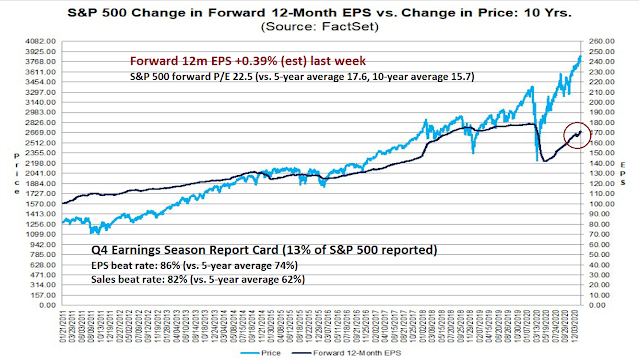 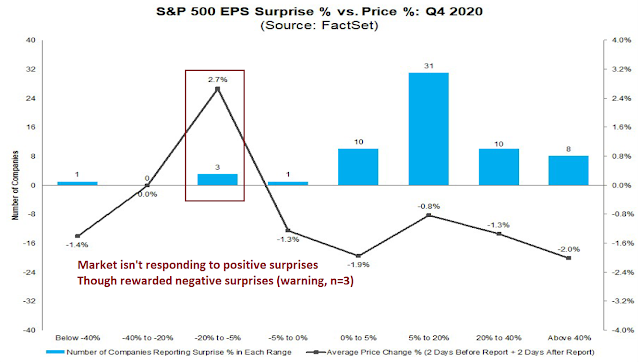 Where is the leadership?

The analysis of market leadership is also flashing warning signs. To be sure, the S&P 500 has been led by large-cap growth stocks. The NASDAQ 100 has led the market upwards, though the NDX to SPX ratio violated a rising relative trend line in early November. The latest relative upswing only represents a sideways consolidation within a range. 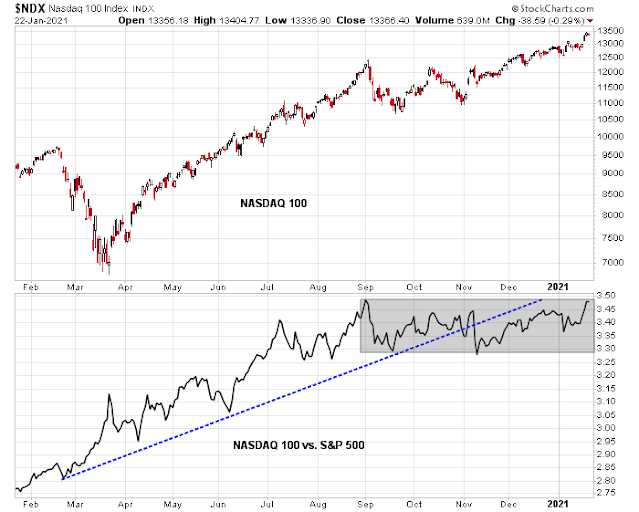 A more detailed look at the relative performance of the top five sectors is more worrisome. These sectors represent 75% of S&P 500 index weight, and it’s virtually impossible for the index to rise sustainably without the participation of a majority of these sectors. The only signs of relative strength come from float-weighted consumer discretionary (AMZN and TSLA) and communications services. None of the other sectors are exhibiting signs consistent strong relative strength. Put simply, the market is being led upwards by a handful of Big Tech stocks. 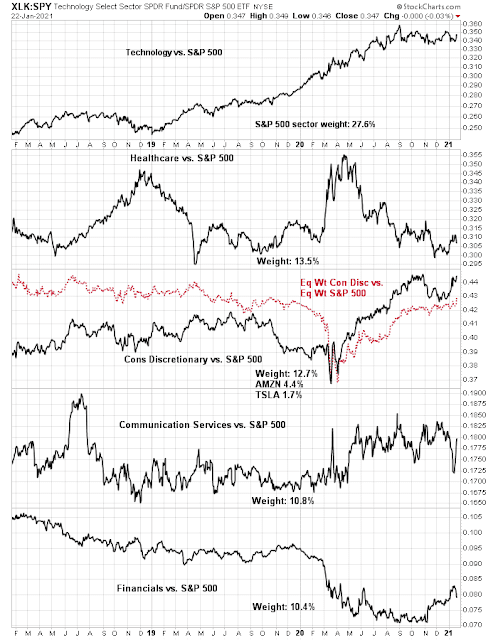 The narrow leadership is also evident in the analysis of market breadth. Even as the S&P 500 reached fresh highs, indicators such as NYSE and NASDAQ new highs, the % of stocks with point and figure buys, and the percentage of stocks above their 50-day moving average are all making patterns of lower highs and lower lows. As we progress through earnings season, the narrowness of the leadership poses a grave stock specific risk to the major indices. Any disappointment has the potential to open the door to a sell-off. 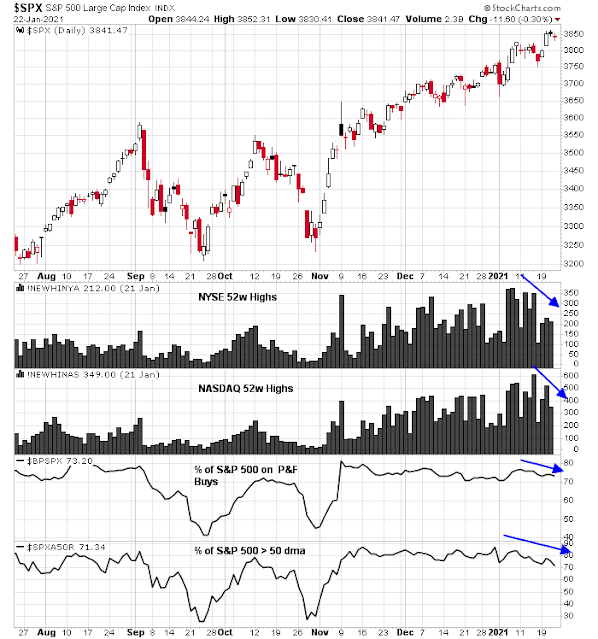 In conclusion, the market is undergoing a melt-up and a setback can happen at any time. At worse, the market is vulnerable to a violent air pocket of unknown magnitude. Remember Bob Farrell`s Rule #7: “Markets are strongest when they are broad and weakest when they narrow to a handful of blue-chip names.”
Brace for volatility in the coming week from individual earning season results and the FOMC meeting. 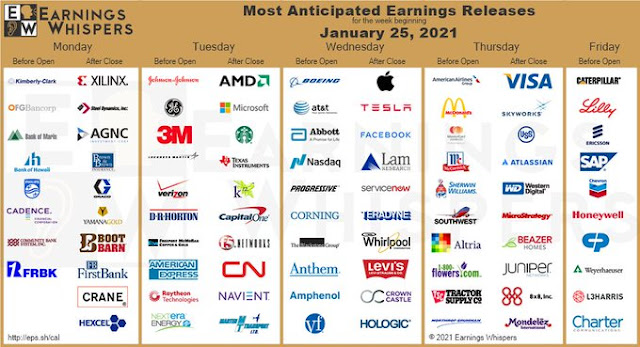