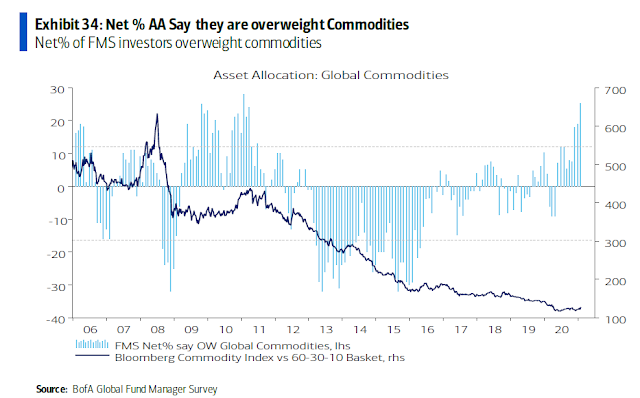 As a cautionary note, one reader alerted me to a well-reasoned objection on the commodity supercycle thesis.

Much depends on China demand

China watcher Michael Pettis raised his objections in a Twitter thread. Simply put, a secular commodity bull doesn’t make sense from the demand side. Much depends on Chinese growth remaining at the current unsustainable levels.

I wonder if they’ve thought through the systemic implications. Given China’s disproportionate share of demand (50% or more of global production of major industrial metals, for example), to predict a new supercycle of rising commodity prices is effectively the same as predicting that China will run another decade or two of 4-6% GDP growth, driven mainly by surging infrastructure and real-estate investment. This in turn implies that China’s debt-to-GDP ratio will rise from 280% today to at least 400-450%.
This strikes me as pretty unlikely. For those who might argue that “all it would take” is for India to begin to replicate China’s growth story of the past four decades, it would take at least 15-20 years of replicating China before India were big enough to matter to anywhere near the same extent.

Pettis concede that we could see a cyclical recovery, but expectations of a secular bull are overblown.

We could of course get a temporary rise in hard-commodity prices as US infrastructure spending kicks in (although this year I expect Chinese hard-commodity consumption to drop temporarily) , but most of the variation in demand depends ultimately on what happens in China, and of course the more hard commodity prices rise because of non-Chinese factors, the harder it will be – and the faster debt must rise – to maintain the needed Chinese growth rate.

Before abandoning the commodity bullish thesis, investors should consider the recent moves by Berkshire Hathaway (BRK). In August, the company reported that it spent $6.6 billion to purchase positions in five Japanese trading houses. The surprising move was attributed to the low valuations of the trading houses, international diversification, and sector exposure. Specifically, these trading houses offers a window into the cyclical global economy, namely steel, shipping, and commodities. More recently, BRK announced that it bought a $4.1 billion position in Chevron.
These portfolio changes by Warren Buffett and his lieutenants are signals that BRK is buying into cyclical and commodity exposure.
As the chart below shows, the company’s sector bets were timely. Global materials and mining stocks have outperformed the MSCI All-Country World Index (ACWI) since the Japanese purchases were announced. As well, the relative performance of energy stocks appears to be constructive. Global energy is turning up against ACWI, and it is bottoming when compared to the red-hot global mining sector. 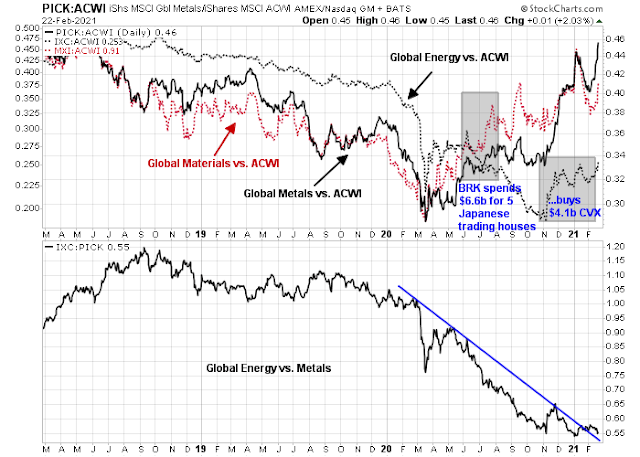 I return to the question raised by Pettis. Is this a secular or cyclical commodity bull?
For investors with a 2-3 year horizon, it probably doesn’t matter. The global economy is undergoing a cyclical and reflationary rebound. Conference Board CEO confidence recently reached 17-year highs. Companies are on track to increase their capital spending plans, which translates into high commodity demand. 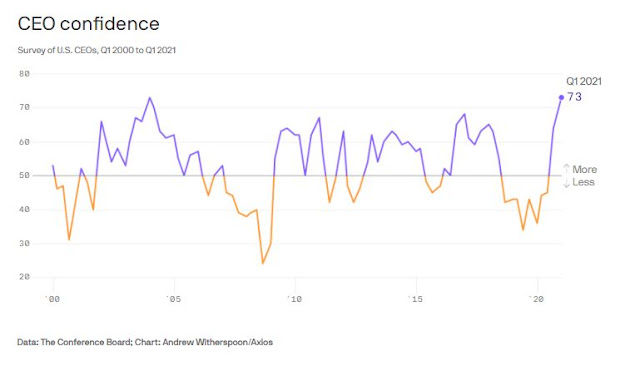 While there may be some short-term potholes in the road (see No reasons to be bearish?), this is the start of a new equity bull. Investment-oriented accounts should position themselves accordingly.
I reiterate my view that commodity bulls should look for contrarian opportunities in energy. While the most recent BoA Global Fund Manager Survey showed an excessively long position in commodities, the monthly change indicated that managers bought commodities but sold energy. 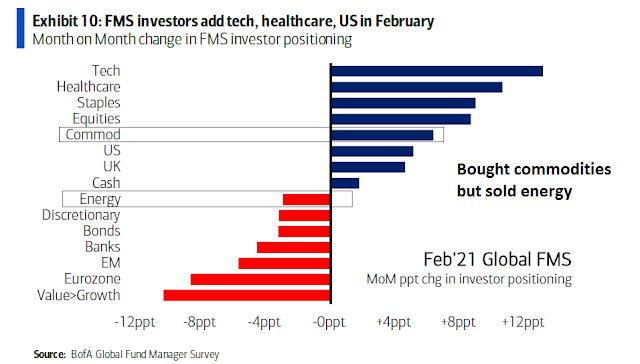