Skip to content
The investment seasons are changing. Two major factors are emerging in altering the risk and return profiles of multi-asset portfolios in the coming years, rising commodity prices and value investing.
There is a strong case to be made that we are on the cusp of a new commodity supercycle. The last time the CRB to S&P 500 ratio turned up, commodity prices outperformed stocks for nearly a decade. The ratio is on the verge of an upside breakout from a falling trend line, supported by the stated desire of the Biden administration and the Federal Reserve to run expansive fiscal and monetary policies. 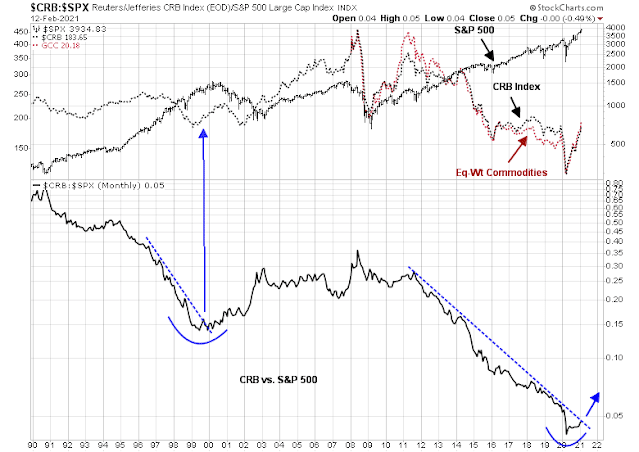 In addition, value stocks are exhibiting the start of a multi-year turnaround against growth stocks. 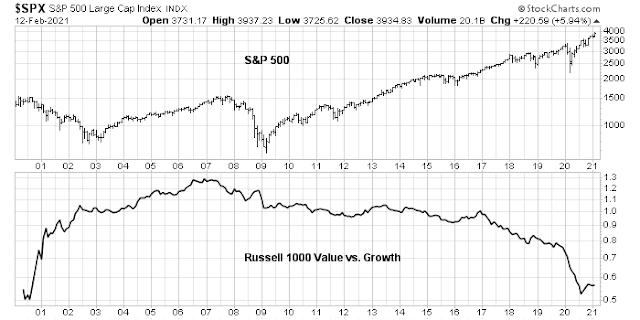 Here is how to combine value investing while participating in rising commodity prices. I’ll give you a hint with this mystery chart.

More on this value opportunity below.

Inflation is on the horizon, and there are good reasons from both a top-down macro policy perspective and a technical perspective. Both fiscal and monetary policy-makers have expressed the willingness to run a “hot” economy. President Biden has proposed a $1.9 trillion fiscal package. As well, the Fed’s Summary of Economic Projections, otherwise known as the dot plot, indicates it will not raise rates until 2023.
These policies have set off inflation alarm bells. The concern has not just come from deficit hawks, but thinkers who were former supporters of more deficit spending. Former Clinton-era Treasury Secretary and Obama-era Director of National Economic Council Larry Summers penned a Washington Post OpEd warning that the $1.9 trillion bill would overheat the economy. His views are supported by former IMF chief economist Olivier Blanshard. Former New York Fed President Bill Dudley, who was a dove during his tenure at the Fed, also wrote a Bloomberg Opinion article titled “Four More Reasons to Worry About U.S. Inflation”.
Summers agrees with Biden as to the intention of the spending, which is to do whatever it takes to enable the economy to recover from the pandemic induced recession. His concern is the size of the package exceeds the economy’s “output gap”, which represents the difference between current economic growth and the economy’s growth potential, or “speed limit”. The $1.9 trillion spending initiative would raise aggregate demand well above supply, which overheats the economy and bring on inflationary pressures. Instead, Summer believes the package should spend funds gradually over time and be focused on long-term investments.
The Biden administration believes the US faces existential threats in the form of a global pandemic and climate change which necessitates an FDR-era Big Government activist response. Biden learned his lesson from the negotiations over Obama’s 2009 stimulus bill, whose effects were smaller than originally envisaged. As well, the “output gap” is a difficult figure to estimate, much like the natural unemployment rate that the Fed used to steer monetary policy. As an example, a study by ISI-Evercore found that if we use the CBO’s economic potential to estimate output gap but the Fed’s GDP economic growth path, the output gap is closed in 2022. 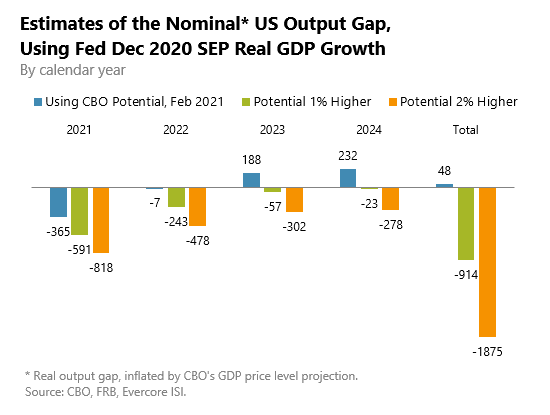 In the meantime, inflationary expectations are rising. The 5×5 forward inflation expectation rate is above the Fed’s 2% inflation target and well above the 5-year Treasury yield. 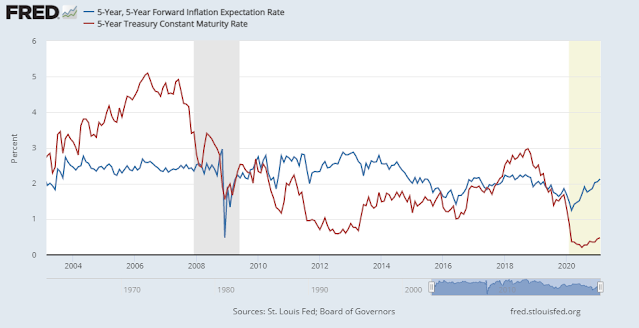 The debate started by Larry Summers is over the secular path of inflation. At a minimum, these conditions call for a cyclical rise in inflation. Indeed, the US Inflation Surprise Index (red line) has been elevated since mid-2020, and inflation surprises have recently spiked all over the world. 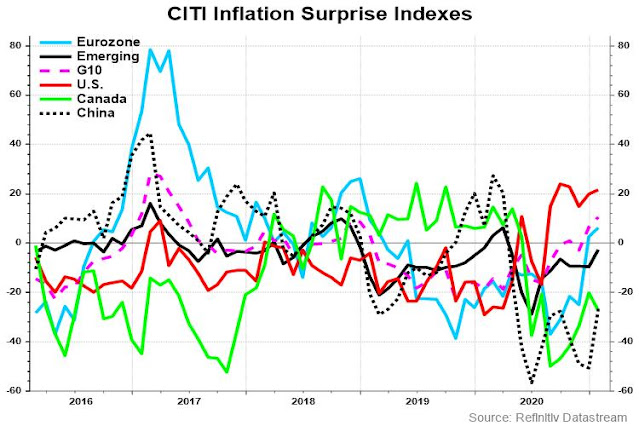 For investors, the secular vs. cyclical inflation debate is irrelevant and an academic exercise. From a technical perspective, the chartist could argue that when gold outperforms the CRB Index, it is a sign that inflationary expectations are rising. When gold lags the CRB, and in particular when the copper/gold ratio rises, it is a sign of cyclical reflation. 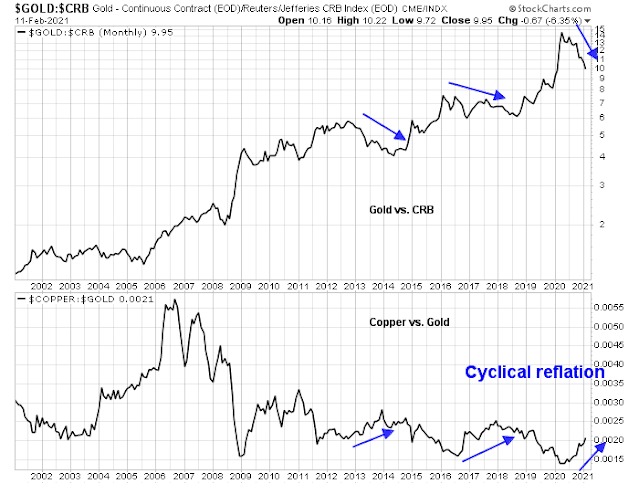 The investment hedge to an inflationary environment is to add commodity exposure. Equity investors should add exposure to the commodity producing sectors of the stock market.
It’s time to reveal the mystery chart, which is the ratio of energy stocks to material stocks. Since the materials sector is relatively small and has non-mining companies such as steel, the second panel of the accompanying chart shows the ratio of oil & gas exploration and production companies to mining. The bottom panel shows the ratio of TSX energy to material stocks listed in Toronto, which has a broader sample of companies in both sectors. The patterns are all similar. Energy had been lagging materials, but it is in the process of making a saucer-shaped relative bottom. 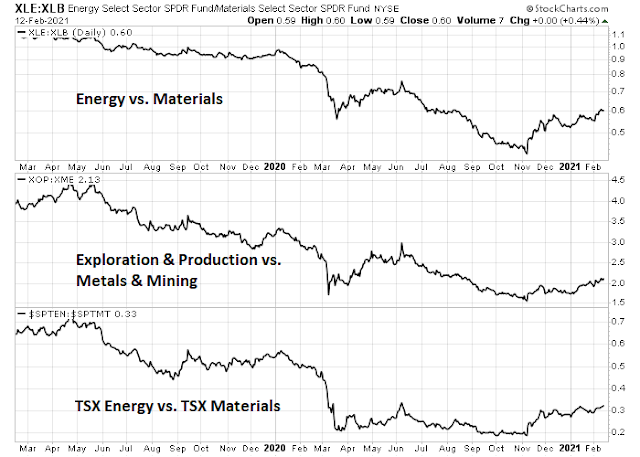 Value investing is by nature uncomfortable. It’s natural to be leery of energy stocks. From a fundamental perspective, the main reason to avoid the energy sector is the growing acceptance of climate change and global initiatives to lower the carbon footprint. The Intergovernmental Panel on Climate Change’s Global Warming of 1.5°C report laid out what needed to be done. To reach the Paris Agreement’s goal of limiting warming to 1.5° Celsius above 2010 levels, every nation must cut its carbon-dioxide emissions by about 45% by 2030 and reduce to net-zero by 2050.
Today, 9 of the 10 largest economies have pledged to reach net-zero emissions by 2050. 29 countries, plus the EU, have net-zero pledges for all greenhouse gases. Some 400 companies, including majors such as Microsoft, Unilever, Facebook, Ford, and Nestle, have signed on with the Business Ambition for 1.5°C pledge. GM announced that it will stop selling internal combustion vehicles by 2035. Royal Dutch Shell boldly stated last week that its production likely reached a high in 2019 and expects it to gradually decline. These initiatives are sounding the death knell for carbon-based energy sources like oil and gas.
Here is the bull case for oil prices over the next few years, as outlined by Goldman Sachs commodity strategist Jeff Currie in a Bloomberg podcast.

His basic argument has a few parts. One key element is the nature of green stimulus. While moves to electrify and decarbonize the economy will, in the long run, reduce the commodity-intensity of economic growth, these benefits are felt on the back end after years of capital expenditures. In the short run, faster growth and investment will naturally increase demand for commodities by delivering a jolt to growth and consumption. What’s more, because of environmental reasons, and the potential lack of long-term demand for, say, oil, these price increases won’t be met with increased investment in new production/mining/exploration etc. the way they might normally in a price boom. Again, if you think the long-term future is an economy less dependent on hydrocarbons, why invest now, even if prices are moving higher?
Currie also notes that Biden has a lot of discretion about taxes on drilling on federal lands and that he can institute a stealth carbon tax, lifting the global price of oil in a bid to make clean energy (wind, solar etc.) even more cost-competitive.,,
The other big aspect of his view is economic redistribution. It’s well understood by now that lower-income households have a higher propensity to consume, rather than save, their marginal dollars. So, direct checks, and other forms of wealth redistribution under Biden, will grow the economy faster than, say, the Trump tax cuts. But furthermore, says Currie, the consumption of lower-income households is more commodity-intensive than the consumption of higher-income households. Hence wealth redistribution gives you a double jolt: more growth, and more commodity-intensive growth specifically.

In other words, the supply response to rising oil prices is likely to be muted owing to the expected long-term decline in demand. That said, Bloomberg reported that shale producers are expected to ramp up production as oil prices stay above $50.

American oil explorers will boost drilling and production later this year as crude prices are set to stay above $50 a barrel, according to a U.S. government report.
Supply from new wells will exceed declining flows from wells already in service, raising overall crude production from the second half of this year, the Energy Information Administration said in its Short-Term Energy Outlook. The agency increased its forecast for 2022 U.S. crude output to 11.53 million barrels a day, up from January’s estimate of 11.49 million.

Buried in the story is the key expectation of falling aggregate production.

This chart of projected Chinese oil demand tells the story. Oil demand is expected to rise and peak in the latter part of this decade, followed by long-term decline. Over the next 5-10 years, however, it’s difficult to wean an economy off hydrocarbons. 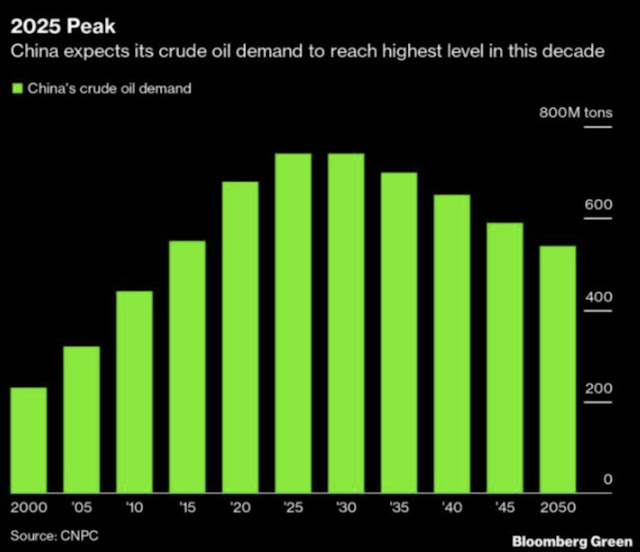 The market response to corporate initiatives to diversify into green and alternative energy also tells a bullish story of legacy energy producers. Contrast the attitude of European companies like BP (BP) and Total (TOT), which recently paid substantial premiums to buy into UK offshore wind farms, to the more conservative views of American giants like Chevron (CVX) and Exxon Mobil (XOM). The relative performances of BP and TOT to CVX and XOM also tells the story of the market’s assessment of the two strategies. 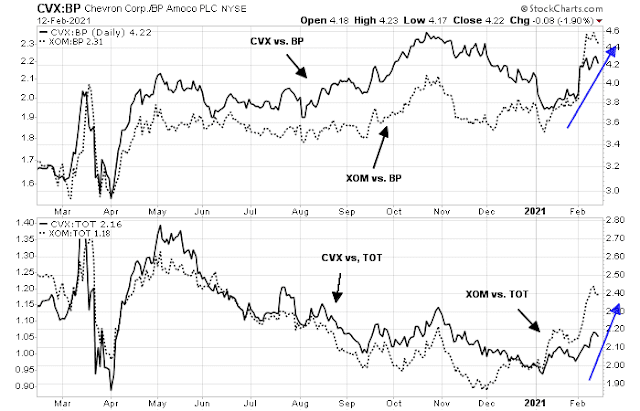 Here is another reason to favor energy over material stocks. Even if you wanted to participate in the upside of a commodity supercycle through resource extraction stocks, the enthusiasm for materials over energy stocks is substantial from a relative value and fund flows perspective. The latest BoA Global Fund Manager Survey shows that global investors have been raising their weights in both sectors, but they are already in a crowded long in materials, while their energy sector weight is only at a neutral level. 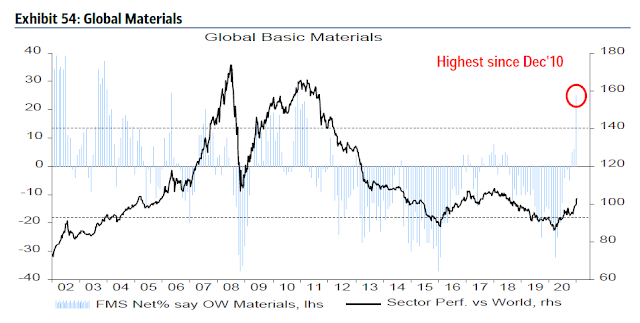 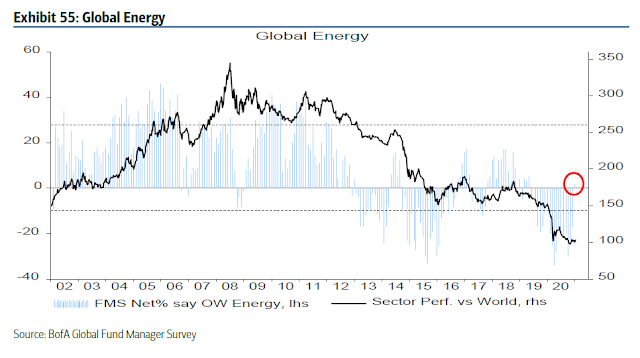 In conclusion, the global economy is poised for a bull market in commodity prices. Within the commodity-producing sectors, there is a substantial value opportunity for investors in energy stocks owing to the reluctance of management to invest in new supply should oil prices rise.
The cyclical rebound should translate into higher oil prices over the next 12-24 months. In the past three years, the ratio of energy stock prices to crude oil has been relatively flat. Energy stocks should rise in line with oil prices, which creates considerable profit potential under a bullish oil scenario.