2020 is over, what’s the next pain trade? – Humble Student of the Markets 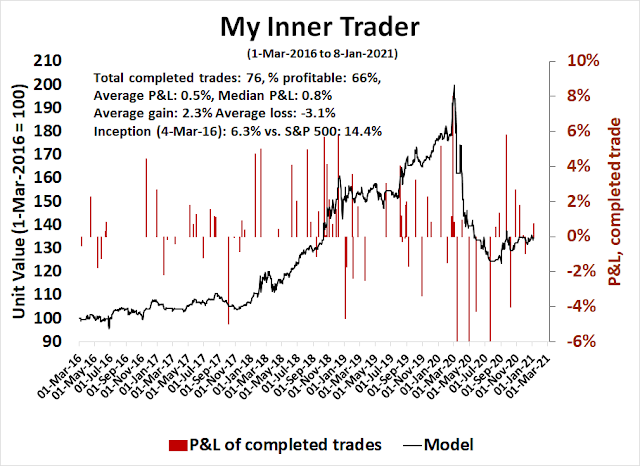 The next pain trade

Now that 2020 is over, what’s the next pain trade? I have a few candidates in mind. The latest BoA Global Fund Manager Survey taken in early December described the top two most crowded trade as long technology stocks, and short USD. 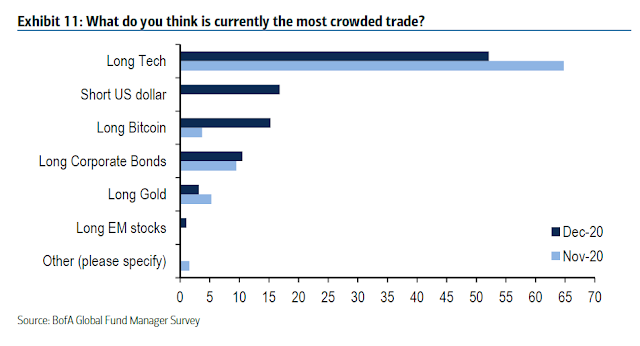 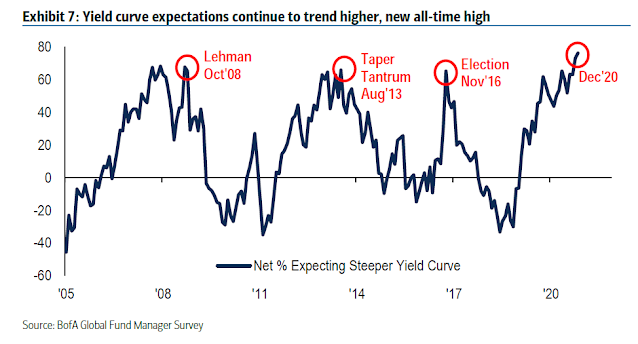 As a reminder, this survey was taken in December. After the Georgia special Senate elections gave the Democrats the trifecta of the control of the White House, Senate, and House of Representatives, the 10-year Treasury yield surged to over 1%, and the yield curve steepened even further.
All of these vulnerabilities are connected from a cross-asset perspective – the steepening yield curve, long technology stocks, and short USD. It’s all the same pain trade, and it’s equity bearish. Here’s why.

Let’s unpack some of these factor exposures from a cross-asset perspective. Here is the most important chart that investors should consider. In the wake of the Democratic win in Georgia, the 10-year Treasury yield shot up beyond 1%. The 10-year yield broke up through a falling trend line in December, but it has been rising steadily in a channel that began last August.

Here is why that matters. Equity investors will tolerate higher bond yields as long as they are offset by a better growth outlook. But disappointing economic reports, such as the December Jobs Report miss, is a crack in the better growth narrative. In addition, FactSet reported that the Street has been revising EPS downwards, which is a sign of negative fundamental momentum. Quarterly EPS estimates fell about -0.50 across the board in the last three weeks. When will the combination of a rising 10-year Treasury yield and falling EPS estimates put downward pressure on stock prices?
Also consider the long technology stock bet, which is a form of growth stock exposure, from a cross-asset perspective. When growth is scarce, rates fall and investors bid up growth stocks. When growth expectations rise, rates rise and value outperforms growth.

However, Big Tech growth makes up 44.5% of S&P 500 weight, while value sectors are only 30.3%. If growth stocks become a drag on the index, the S&P 500 will face considerable headwinds in trying to advance. 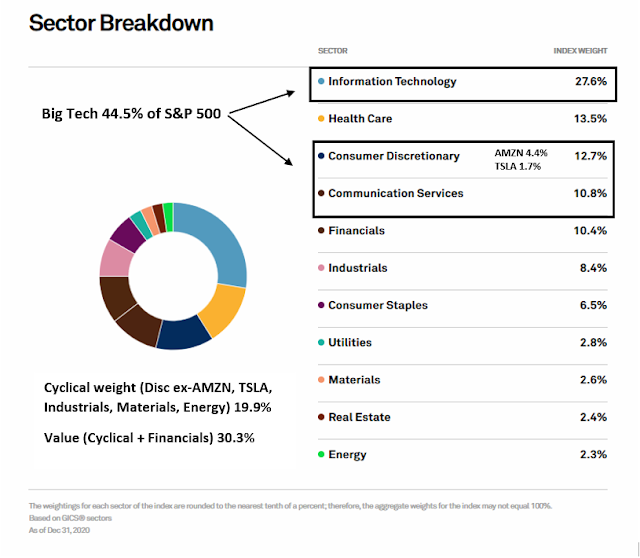 The other crowded short identified by the respondents of the BoA Global Fund Manager Survey is a USD short position. This is another pain trade that is correlated to the others.

First, positioning in the USD is at an extreme, and the market is setting up for a rally that could hurt the short-sellers. 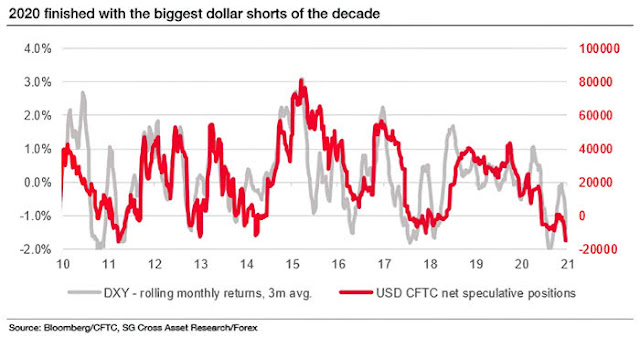 The recent Democratic victory set up the anticipation of better economic growth, which is Dollar positive and pushed up bond yields owing to higher deficits. The spread between the 10-year Treasury yield and the Bund and JGBs are rising, which should attract more funds into the greenback. This is all occurring in a backdrop where the USD Index is testing a key support zone that stretches back to 2018. 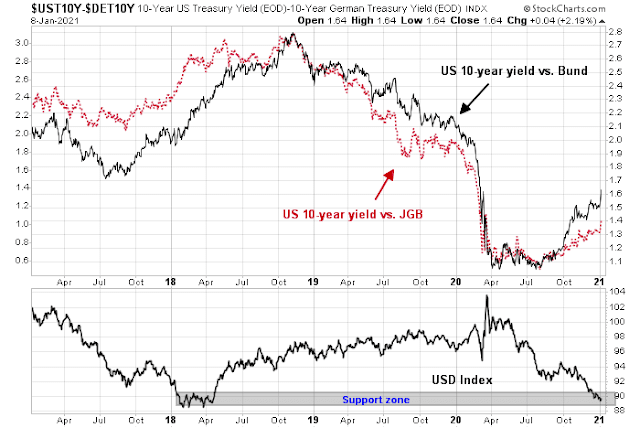 All of these conditions are supportive of a reversal in USD weakness. In the last 18 months, stock prices have been inversely correlated with the USD Index. Dollar strength is likely to spark a risk-off episode, starting with EM risk assets that are sensitive to the USD exchange rate.

Waiting for the bearish catalyst

So far, this discussion of the next pain trade is only a trade setup without a bearish catalyst. The stock market may need a final blow-out before correcting.
The latest cover of Bloomberg BusinessWeek could be interpreted as a contrarian bullish magazine cover indicator. Indeed, the stock market rallied the day pro-Trump protesters invaded the Capitol. 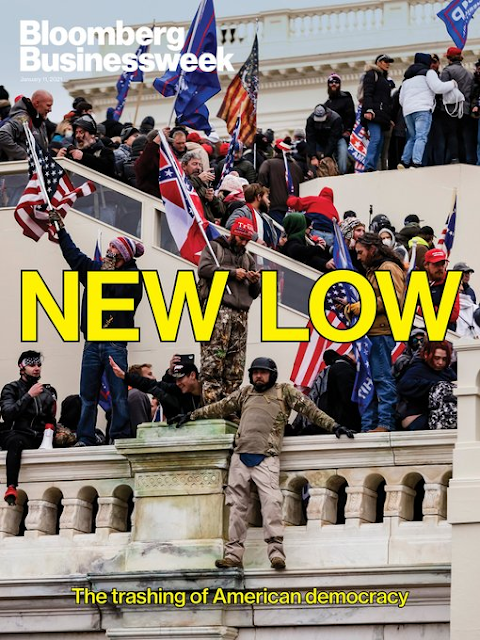 Price momentum has been extremely strong. The S&P 500 is going on an upper Bollinger Band ride and there were no NYSE new lows Friday. The index spent August on upper BB rides. One resolved in a sideways consolidation, and the other ended with a correction. 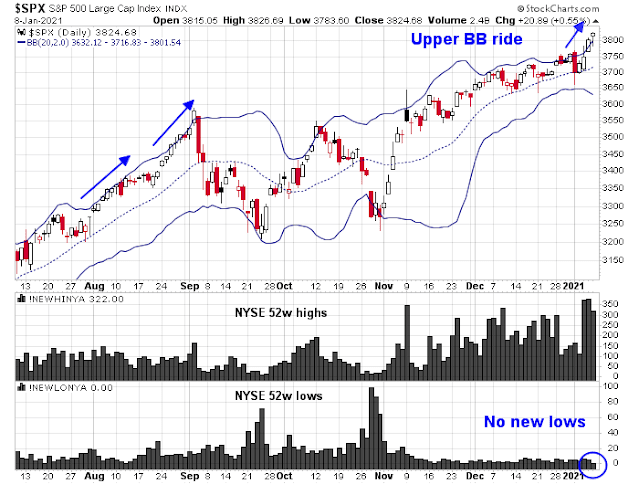 As well, I have been monitoring the percentage of stocks in the S&P 500 that are above their 200-day moving average. In the past, readings of 90% or more have signaled sustained market advances and they don’t end until the 14-week RSI becomes overbought or near overbought. Conditions are very close to an overbought condition, but remember Bob Farrell’s Rule #4: “Exponential rapidly rising or falling markets usually go further than you think, but they do not correct by going sideways.” 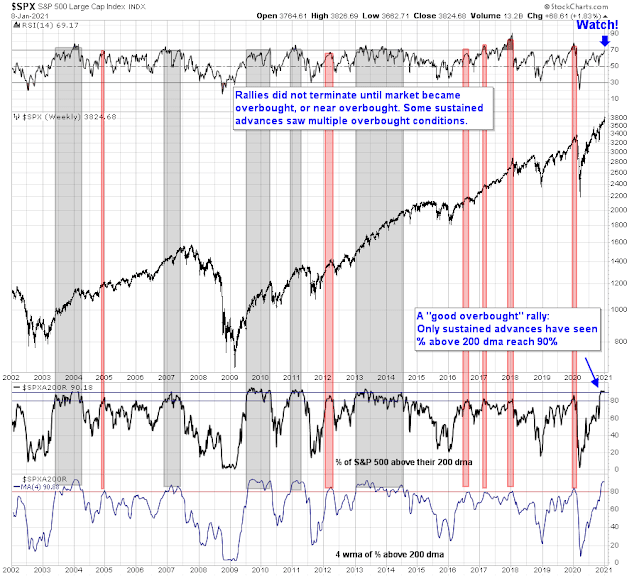 While the current market is dominated by strong price momentum, the clash between positive price momentum and negative EPS fundamental momentum will catch eventually up with the bulls. Despite these cautionary signals, I believe any pullback is likely to be no more than 5-10%. How you position for market weakness is therefore a function of your investment objectives, risk tolerance, and investment time horizon.
In summary, the combination of a steepening yield curve, long technology stocks, and short USD are correlated, and constitute the next pain trade. The market is increasingly vulnerable to a 5-10% correction. These conditions are equity bearish, but they lack a bearish trigger. Investment-oriented accounts should be prepared to deploy additional cash should the market pullback. A 5-10% pullback is consistent with normal equity risk and investors who cannot tolerate those levels of drawdowns should rethink their asset allocation. By contrast, traders with shorter-term time horizons should wait to see evidence of a definitive downside break in the face of strong price momentum before turning bearish.