Too far, too fast? – Humble Student of the Markets 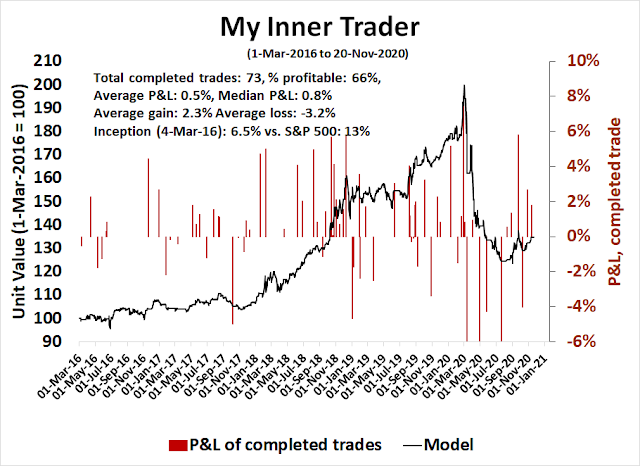 It is said that it’s a recession is when your neighbor loses his job, and it’s a Depression if you lose your job. In other words, economic weakness is only academic until it hits home. The denizens of New York City and Wall Street were jolted last week when the MTA, which operates the NYC subway and commuter services Metro-North and Long Island Rail Road, announced that it may need to dramatically cut services in the absence of fiscal support. The MTA proposed laying off 9,000 employees and cuts to transit services of 40-50%.
The bad news is hitting home, and Wall Street is suddenly realizing that the recovery is not all rainbows and unicorns. In addition, the decision by the US Treasury to end a series of emergency CARES Act support programs raises the risk to state and local organizations like the MTA.
As well, the latest BoA Global Fund Manager Survey revealed that fund managers were stampeding into equities and the reflation trade. 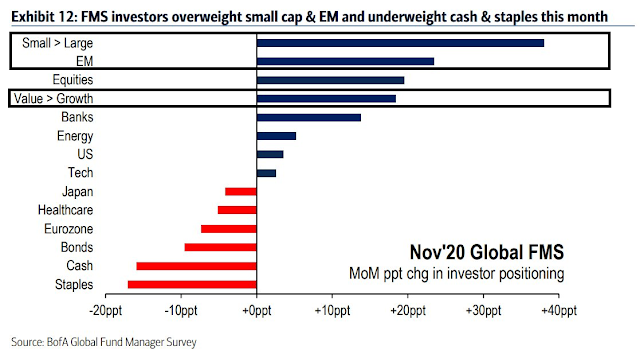 Cash levels have dropped dramatically. To be sure, low cash levels have acted only as a warning, and have not been actionable sell signals in the past [annotations in blue are mine]. 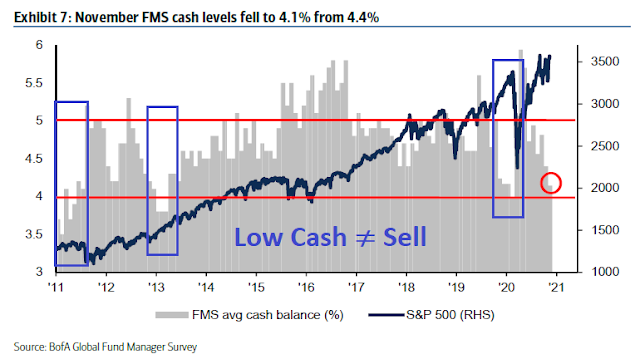 Has the rally gone too far, too fast? Is the Great Rotation trade of growth to value and large-caps to small-caps just a mirage?

Time for a pause?

Is it time for the market rally to pause? The pandemic caseload has been rising dramatically in the US. Different states have responded by entering partial lockdowns, which acts as a brake on economic growth and employment. The slowdown isn’t just restricted to the US, the IMF warned that “the most recent data for contact-intensive service industries point to a slowing momentum in economies where the pandemic is resurging”. 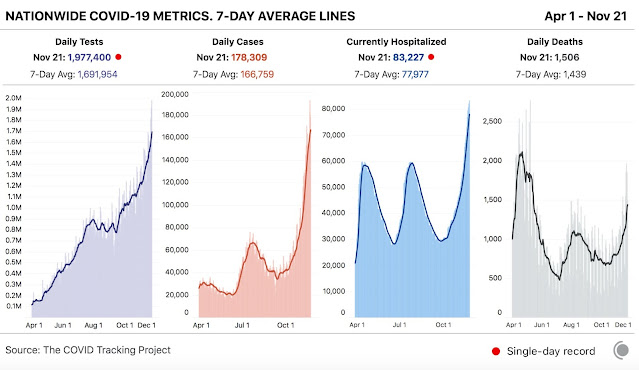 The jobs recovery is showing some signs of stalling. Last week’s print of initial jobless claims missed expectations. The trend of the last few weeks has seen initial claims flatten out and may be edging up again, which raises the specter of a double-dip recession. 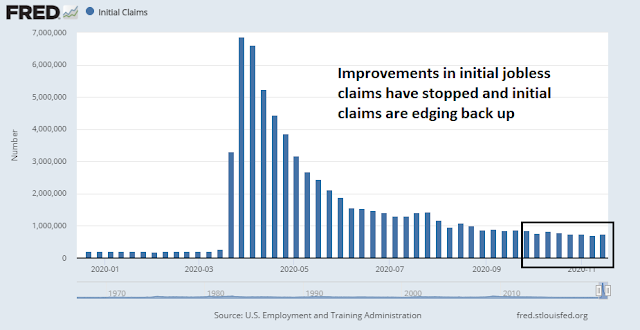 More worrisome is the bond market’s reaction, which is not buying into the equity market’s reflation thesis. The yield curve steepened in response to the upbeat vaccine news. However, inflation breakeven yields were flat during the same period. This is an indication that the bond market expects growth and inflation will be sluggish. 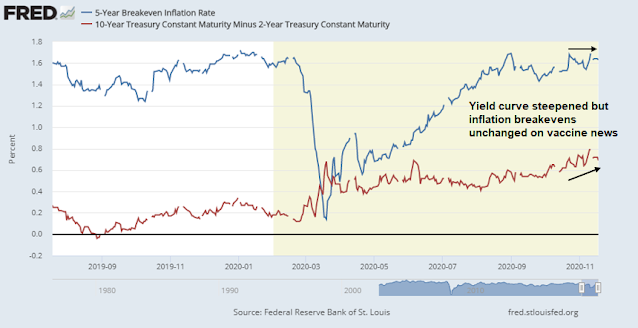 The most alarming development is Treasury Secretary Mnuchin’s refusal to extend CARES Act emergency lending programs beyond December 31, as reported by the WSJWSJ.

Treasury Secretary Steven Mnuchin declined to extend several emergency loan programs established jointly with the Federal Reserve that are set to expire on Dec. 31.
The Fed’s corporate credit, municipal lending and Main Street Lending programs won’t be renewed, Mr. Mnuchin said Thursday.
The central bank signaled disappointment in his decision. “The Federal Reserve would prefer that the full suite of emergency facilities established during the coronavirus pandemic continue to serve their important role as a backstop for our still-strained and vulnerable economy,” the Fed said in a statement.

These programs are the Municipal Liquidity Facility, Main Street Lending Program, and Primary and Secondary Market Corporate Credit Facilities. More importantly, Treasury has asked the Fed to return unused stimulus funds. This is a potentially contractionary fiscal development and a possible preview of the spending tug-of-war between a Biden White House and a Republican-controlled Senate.

Industry analysts have warned that Mr. Mnuchin’s decision would risk unsettling markets—which for various reasons have been volatile around the end of the recent years—by weakening a key source of insurance that fueled investors’ optimism, especially as the pace of the economic rebound that began in May slows amid rising coronavirus cases.
Shutting down the programs could also deprive some businesses and governments of access to low-cost credit if market conditions worsen.

Since the March low, risky corporate and municipal credit has rallied on Fed buying and signals that it is prepared to support the market. What happens now when that backstop becomes shaky? How will changes in credit market risk appetite affect equities?

Some cause for optimism

Before the bears get overly excited, there are reasons for optimism. First, the pandemic can be controlled. Europe’s restrictive measures are working. Nordea pointed out that the eurozone Big Four is following the same winter seasonal patterns of Australia and South Africa, which also went into tight lockdowns. With the right policies, the pandemic can be controlled, and any growth slowdown will be temporary. 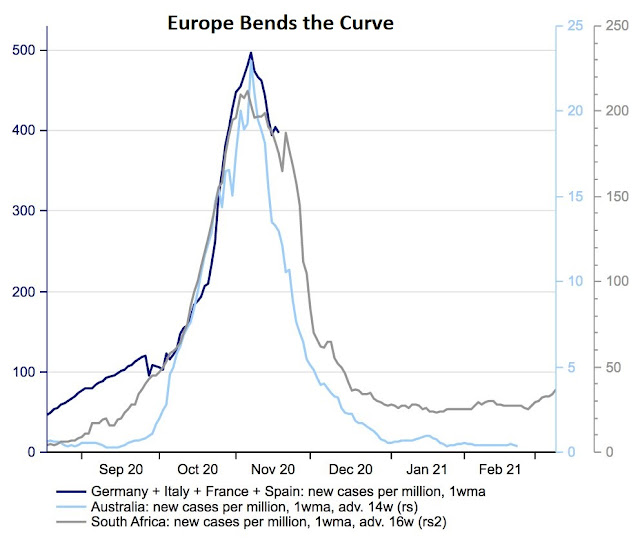 In addition, any concerns that market participants have stampeded into a crowded long are misplaced. The BoA Global Fund Manager Survey shows that equity weights have surged, but levels are not excessive by historical standards. 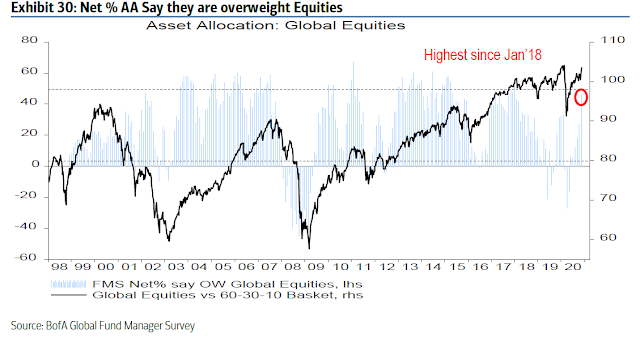 While the BoA survey is a survey of manager’s attitudes, readings can be volatile because they do not necessarily measure what they are actually doing with their portfolios. State Street conducts an aggregated survey of managers, based on custodial data. The latest update of State Street Confidence of North American equity positions indicates that managers are underweight risk (below 100) in their positioning. This is can hardly be called a crowded long condition. 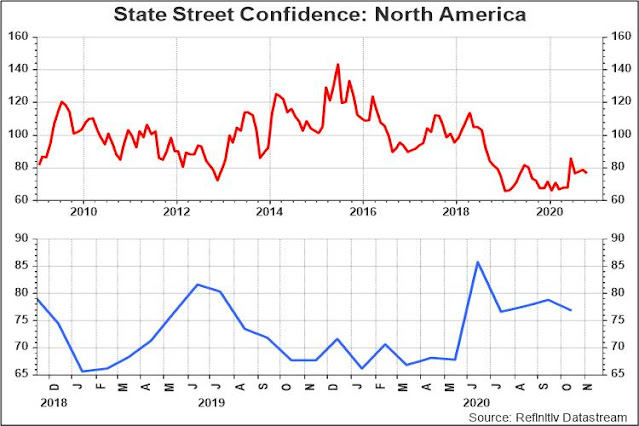 In resolving the bull and bear cases, investors need to put the Great Rotation into context (see Everything you need to know about the Great Rotation but were afraid to ask). The market is undergoing a leadership change, from US to non-US, growth to value, and large-caps to small-caps. Such transitions are rarely smooth. We may have to undergo a period of choppiness and consolidation before the cyclical reflationary bull market reasserts itself. 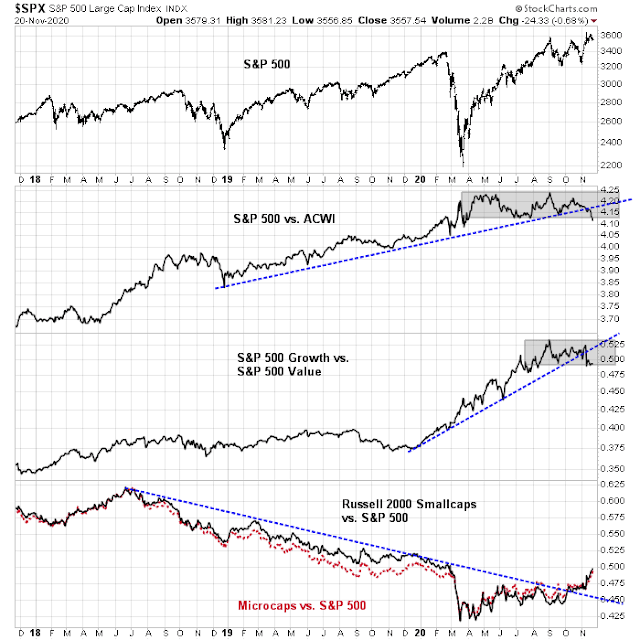 Major trend breaches tell us that the crowd is probably right, but market action can stabilize and consolidate after a break. As the history of the ratio of NASDAQ 100 to small-cap S&P 600 after the dot-com bubble shows, the ratio staged a brief counter-trend rally and consolidated for a few months before falling. That experience may be a useful template for the market today.

I have highlighted in the past that the percentage of S&P 500 stocks above their 200 dma has risen past 80%, reaching almost 90%. Past instances have either resolved themselves in “good overbought” advances (in grey) or market stalls (in pink). The current episode is unusual inasmuch as the 4-week moving average has not exceeded 80% yet, indicating that perhaps breadth and momentum is not all it’s made out to be. This may be supportive of the consolidation and pullback scenario. 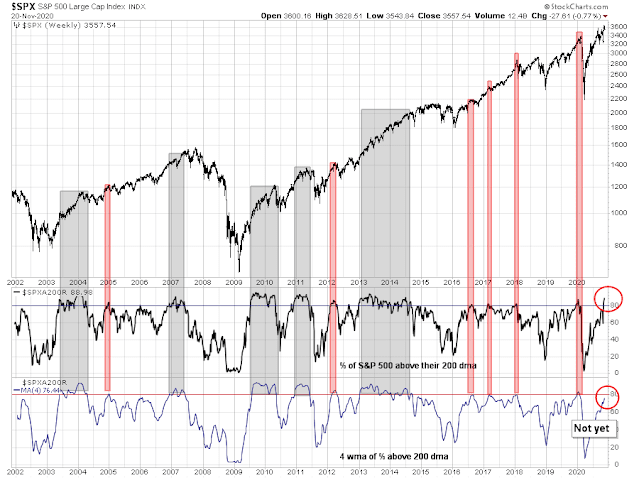 Mark Hulbert has argued that momentum stocks (read: FANG+) are on track to see a strong December, followed by a reversal in January. Since these large-cap growth stocks have taken on defensive characteristics that would imply a corrective phase into year-end. 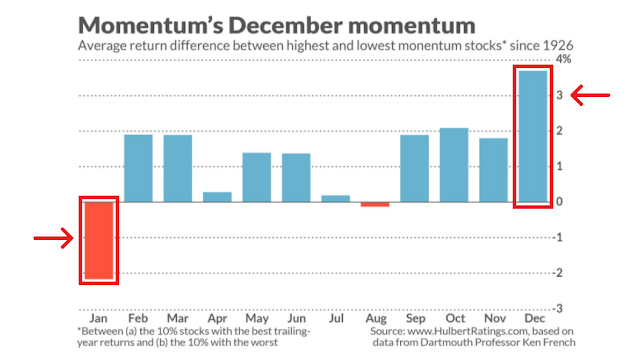 However, don’t get hung up too much on the correction and consolidation scenario. Equity risk appetite indicators, such as the equal-weighted consumer discretionary to consumer staples ratio (equal-weighted to minimize the Amazon weight effect on discretionary stocks), and the high beta to low volatility factor performance ratio, are all behaving in constructive manners.

It’s possible that most of the correction has already played out. Macro Charts observed that equity futures traders have already dramatically cut exposure. The bulls will contend that there may not be much selling left to do. On the other hand, the bears can argue that the market struggled to maintain positive momentum on vaccine news, which is indicative of a poor sentiment backdrop. 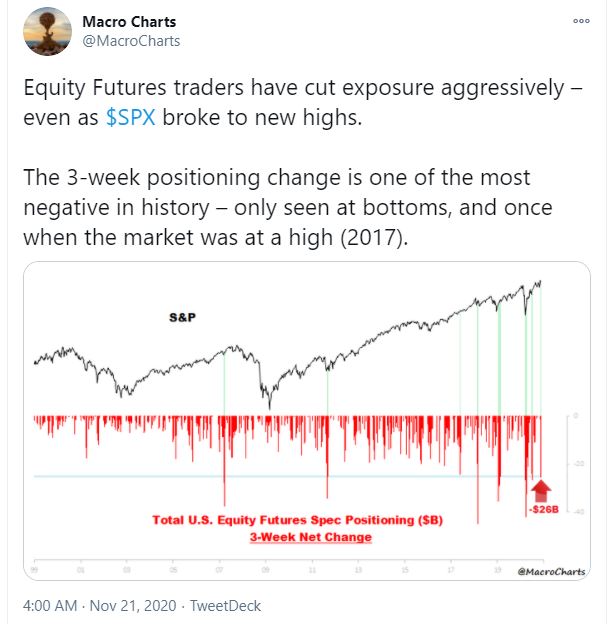 In conclusion, the long and intermediate-term trends for stocks are still up, and the Great Rotation themes remain intact. However, we may be undergoing a brief period of sideways consolidation before launching the next upleg. My inner trader is leaning bullish, but he is staying on the sidelines because of the high risk of sudden reversals. My inner investor believes that any dips should be regarded as buying opportunities.