Do the bulls have a sentiment problem? – Humble Student of the Markets

Should the bulls be worried? The Greed and Fear Index has surged to 88, which represents a warning of excessive bullishness. 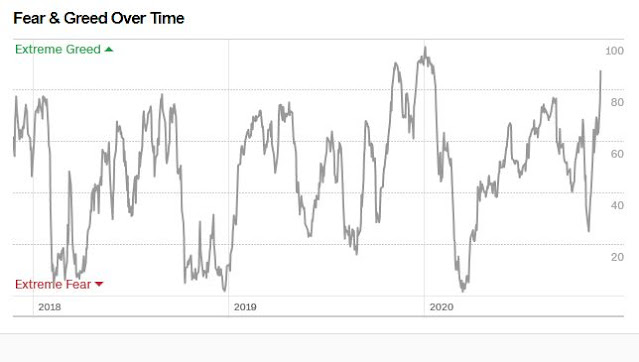 As well, Willie Delwiche pointed out that his survey of sentiment indicators are all tilted either contrarian bearish or neutral. Delwiche concluded that “everyone knows about (& is positioned for) historical tendency for stocks to rally from here into year-end”. 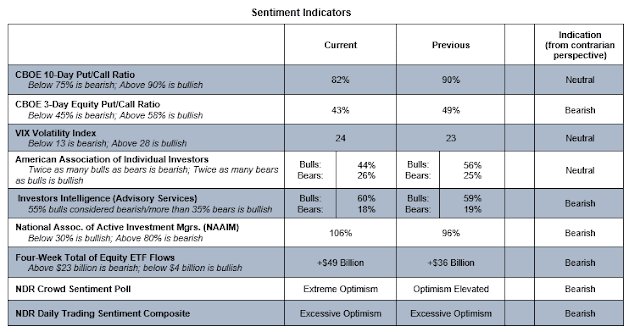 Before you turn all bearish, I would warn that sentiment models work much better as buy signals than sell signals. The adage that “bottoms are events, but tops are processes” is especially true in this case. Panic bottoms are easy to spot using sentiment, but excessive bullish sentiment readings are not necessarily actionable sell signals. This char of the AAII bull-bear spread is just one of many examples of this effect. Deusche Bank recently observed that its cross-asset momentum analysis showed that virtually everything is in risk-on mode. That should be contrarian bearish, right?

Not really. Past episodes of strong cross-asset momentum breadth have been bullish for equities, not bearish. Traders should be jumping on the price momentum bandwagon, and not bet against it. 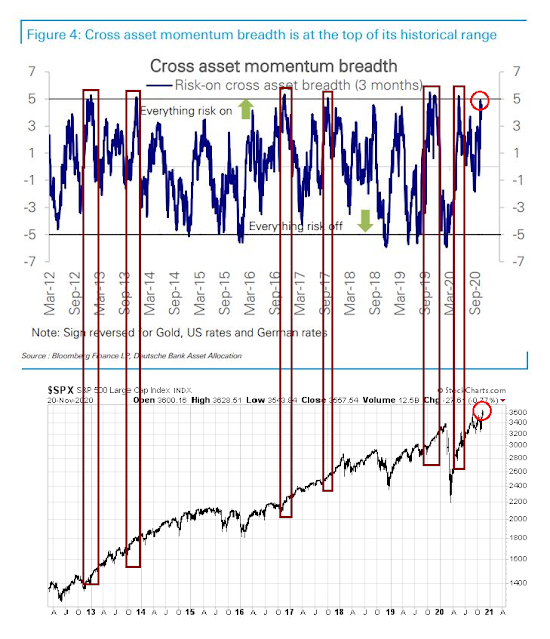 Further analysis of futures positioning shows that asset managers and leveraged funds are nowhere near in a crowded long yet, indicating that there is more room for the market to rise. 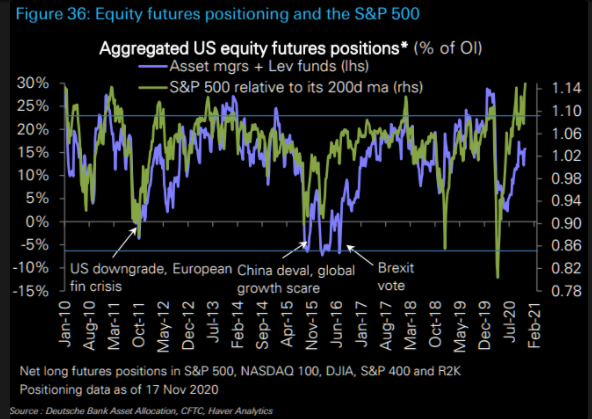 So where does that leave us? It has been three trading days (and one weekend) since the Mnuchin announcement that he is withdrawing CARES Act support for a number of programs administered by the Fed. Since then, neither high yield (junk) bonds nor municipal bond spreads have blown out. Instead, the stock market has chosen to focus on good news, such as the upbeat PMI print, vaccine news, and the expected nomination of Janet Yellen as Treasury Secretary.

The S&P 500 staged an upside breakout through a bull flag and it is testing overhead resistance, which is constructive for the bull case.

The market has historically enjoyed seasonal tail-winds this week. Jeff Hirsch at Trader’s Almanac pointed out that the Wednesday before Thanksgiving and the Friday after tend to have strong bullish biases. Rob Hanna at Quantifiable Edges observed a similar effect and added that the Monday after Thanksgiving has been historically negative.

However, he observed that the market performed better when the momentum was weak on the Tuesday before Thanksgiving:

To determine whether the Wednesday – Friday Thanksgiving edge may have been front-run a particular year, you could examine price action. I have repeatedly found that a market that is oversold going into a strong seasonal period will perform better than a market that is overbought going into a strong seasonal period. A very simple metric that could be used in this case would be to see whether the market closed in the top or bottom half of its intraday range on Tuesday of Thanksgiving week. To do this I used SPY instead of SPX, because it had better intraday data.

Since 1993, I found that years in which SPY closed in the top half of its intraday range on Thanksgiving Tuesday posted a 9-5 record from Tuesday’s close to Friday’s close. When SPY closed in the bottom half of its range on Tuesday the performance over Wednesday to Friday was 10-1. And the average instance posted a 0.8% gain these years versus a 0.1% average gain the other years. So Tuesday’s action appears worth watching as we approach this potentially seasonally bullish period.

In a subsequent post, Hanna found that the market continued to be strong during the Thanksgiving period even if the previous Monday and Tuesday were positive. The win rate was 91%, and the only exception was 1987. 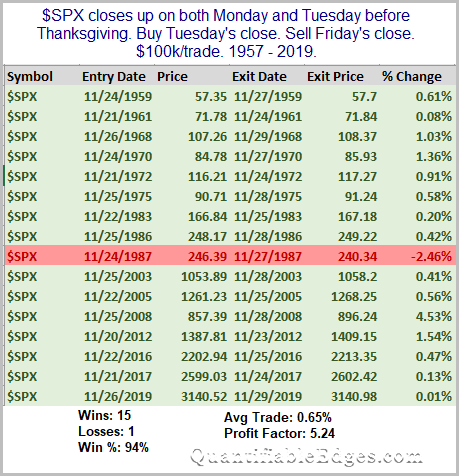 Subscribers received an alert today that my inner trader may be going long the market for a seasonal trade until Friday’s close should SPY close in the bottom half of its range. Based on the combination of the latest analysis from Rob Hanna, and the strength of the recent price momentum, my inner trader went long the market at the end of the day.

43 thoughts on “Do the bulls have a sentiment problem?”