Investors are increasingly convinced that the cyclical and Great Rotation trade is very real and long-lasting (see Everything you need to know about the Great Rotation but were afraid to ask). That should be bullish for the S&P 500, right?

Despite the cyclical and reflationary tailwinds for stocks, the S&P 500 has a weighting problem. About 44% of its weight is concentrated in Big Tech (technology, communication services, and Amazon). The top five sectors comprise nearly 70% of index weight, and it would be difficult for the index to meaningfully advance without the participation of a majority of these sectors. However, an analysis of the relative performance of the top five sectors does not exactly inspire confidence as to the sustainability of an advance. Technology relative strength, which is the biggest sector, is rolling over. Healthcare is weak. Neither consumer discretionary nor communication services are showing any signs of leadership. Only financial stocks, which represent the smallest of the top five sectors, is exhibiting some emerging relative strength. 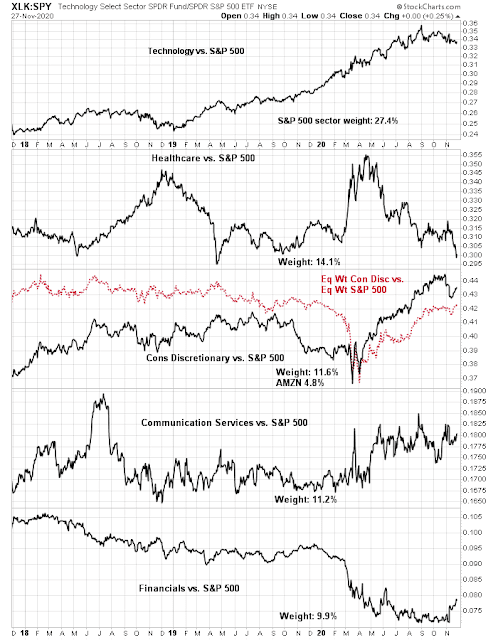 There are better investment opportunities, and investors can potentially outperform by a cumulative 50-250% over the next 2-3 years.

I believe the cyclical rebound and Great Rotation is long-lasting. First, there is ample evidence that the global economy is reflating. The copper/gold ratio and the more broadly based base metals/gold ratio are both surging, indicating cyclical strength.

Earnings sentiment is improving in every region of the world. 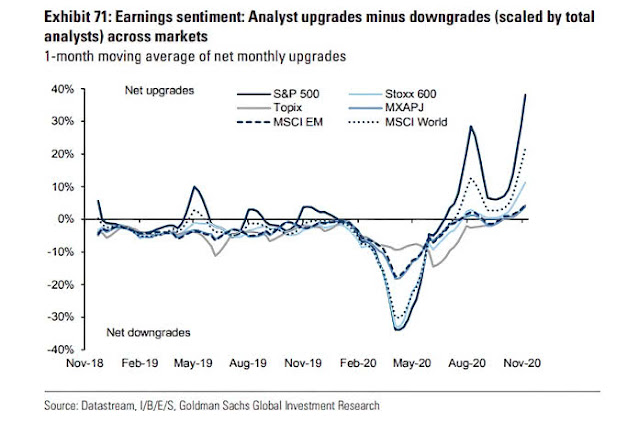 Other cyclical indicators, such as heavy truck sales, are turning up in a way that is consistent with an early cycle rebound. 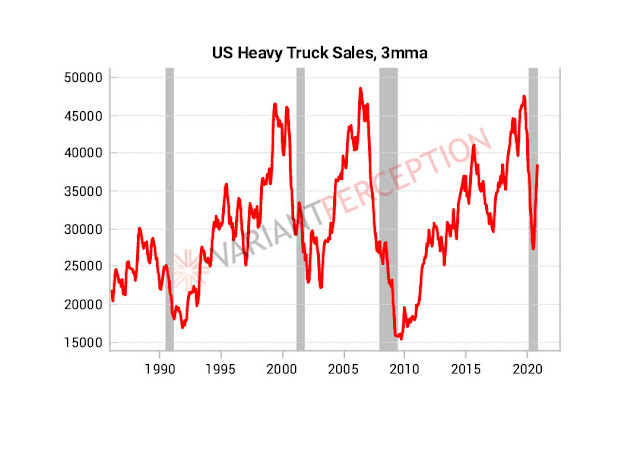 Over in Asia, the closely watched and highly timely 20-day South Korean export figure jumped in November, indicating an acceleration in global strength. 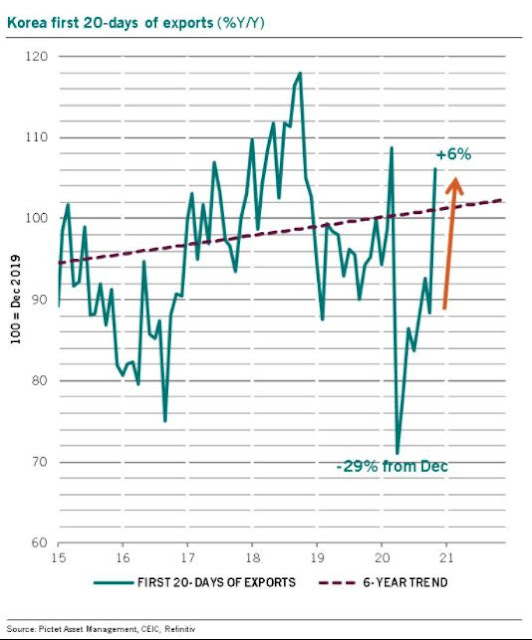 An analysis of fast-money positioning shows that hedge funds went into the November election underweight equity market exposure. When the dire forecasts of a contested election and riots in the streets didn’t materialize, they reversed course and bought equities. Current positioning is not excessive. Institutional fund flows, which is glacial but enormous, is only beginning to buy into the cyclical and reflation theme. 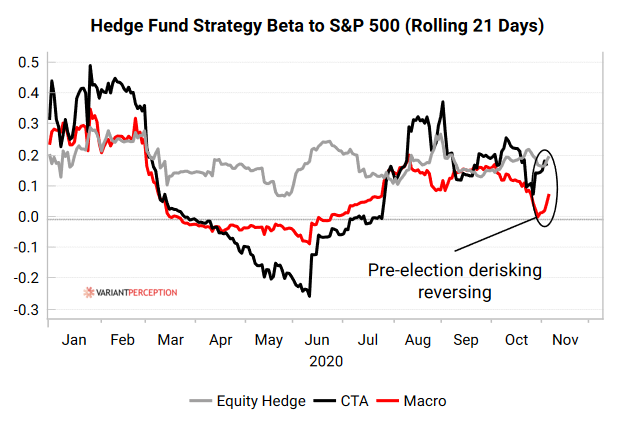 This Great Rotation rally has legs.

What are the potential gains from the Great Rotation trade?

An analysis of the trade setup indicates that upside potential is significant. Historically, relative style performance such as value/growth is long-lasting and the magnitude of gains significant when the dispersion in style returns are large and begin to mean revert. 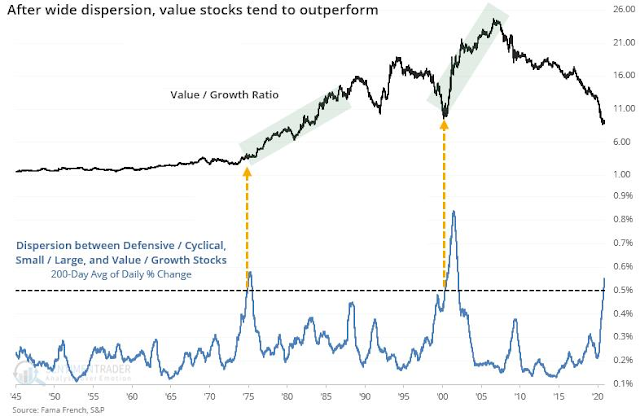 A similar reversal effect can be seen for the size effect, or the small vs. large-cap relationship. 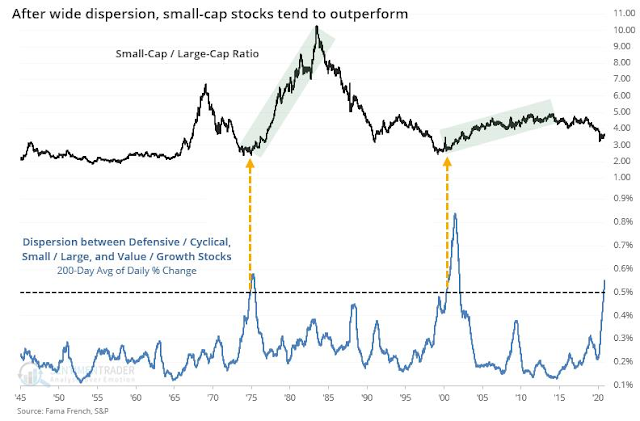 Smidcaps are relatively cheap
This reflects the fact that they’ve been persistently unpopular, despite the recent gains. “Their price action has not kept up with earnings performance,” says Paulsen. Since the end of October, forward one-year estimates for the S&P 600 small-caps have gone up almost 8%, compared to 1.5% for the S&P 500.

In other words, earnings estimates have gone up over four times as much, but stock prices have only gone up twice as much.

As of Nov. 24, large-cap S&P 500 stocks had a forward price earnings ratio of 22 compared to 19.7 for S&P 400 midcap stocks and 19.9 for S&P 600 small-cap stocks, says Yardeni. But the gap is effectively wider, given the greater potential for earnings growth among smidcaps going forward.

Here is how I have quantified the potential relative performance spreads. The following chart depicts the relative returns of the Dow (old economy ) to NASDAQ 100 (large-cap growth). The top panel of the chart shows the one-day relative returns of the Dow/NASDAQ 100 ratio, which has surged recently. The pattern is consistent with the period following the dot-com bubble top, which suggests that the market is undergoing a similar multi-year turn in leadership. 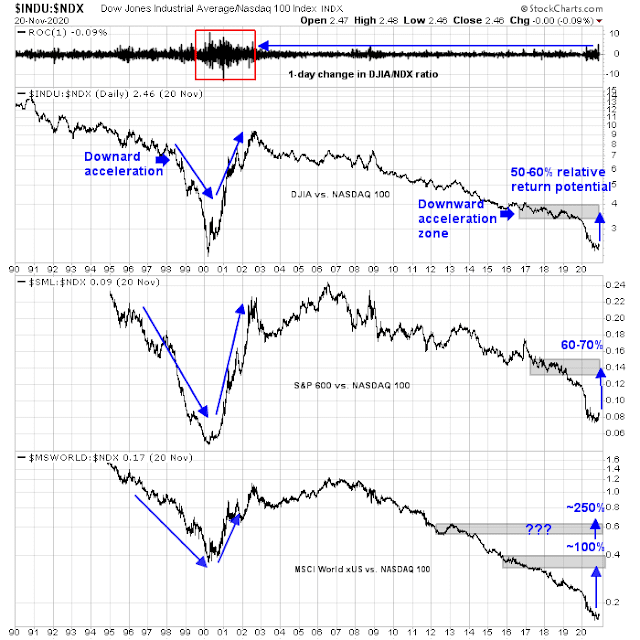 Here are the main takeaways from this analysis.

In conclusion, there is ample evidence that the global cyclical rebound is very real and sustainable over the intermediate-term. The market is forward-looking. Vaccines are on the way, the recession is over. The leadership of US over non-US, growth over value, and large caps over small caps are all turning in convincing fashions. 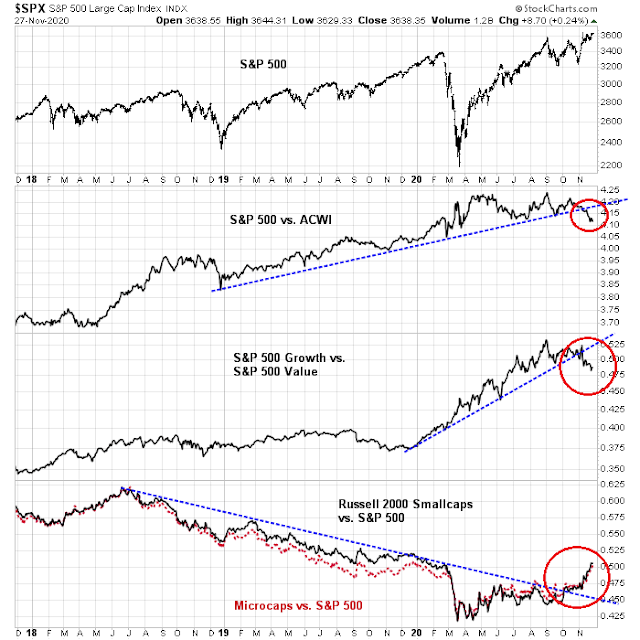 While a rising tide does lift all boats, the S&P 500 is likely to lag owing to the heavy weighting in Big Tech stocks, which are likely to be laggards in the next cycle. Investors can outperform by 50-250% over the next 2-3 years with exposure to a combination of cyclical, value, small caps, and non-US stocks.