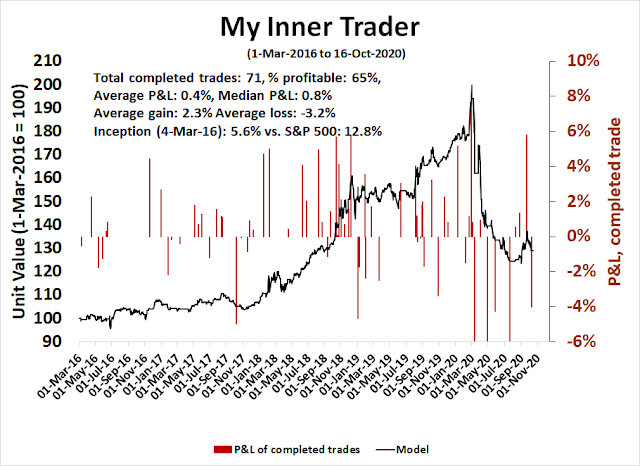 As we approach the November election, the market may be setting up for a pre-election stall. President Trump, otherwise known as “Dow Man”, is fond of benchmarking his performance using the stock market. The S&P 500 (SPY) has returned an impressive 64.5% unannualized since Inauguration. Its performance against the long bond (TLT) is less compelling, but it beat bonds by a total of 12.1% over the same period. 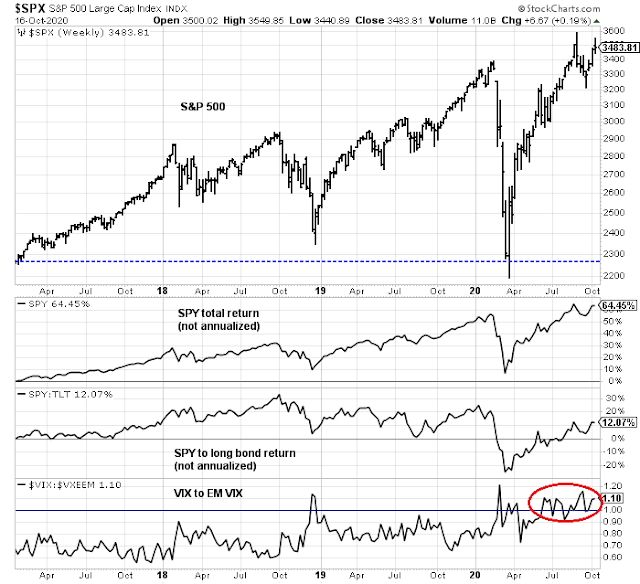 The most disturbing metric is the market’s risk perception. The VIX Index is elevated, and trades at a premium to EM VIX. The market is now pricing US risk like an emerging market. Market nervousness is rising, and traders will have to contend with a heightened risk environment until the November 3 election.

I pointed out elsewhere (see How to trade the election) that the option market is exhibiting a heightened sense of anxiety over the uncertainty of a contested election that ends up in the Courts whose results won’t be known until well past the election date. Implied volatility spikes just after November 3, and remains elevated until well into 2021. 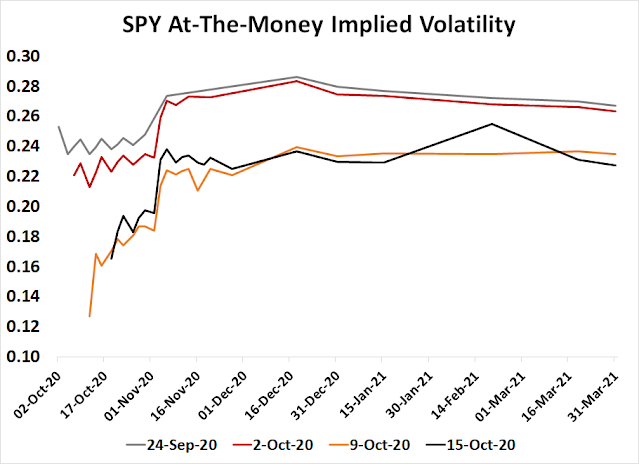 A Marketwatch article reported that the risk of a contested election could send the country into a constitutional crisis. There could be multiple challenges over mail-in voting in a number of important battleground states. The world may not get clarity on Election Night about the victor because of a flood of mail-in votes, and the difficulty in counting them all in time.

Several states, including Pennsylvania and Wisconsin, don’t allow election officials to begin processing mail-in ballots before Election Day. Processing, or pre-canvassing, means taking action to prepare ballots to be counted, like verifying voters’, and in some cases witnesses’, signatures on envelopes. In many states, including Pennsylvania, it also involves checking that ballots are enclosed in a second “secrecy envelope” within the mailing envelope. Finally, processing includes removing ballots from envelopes and stacking them in preparation for the count.

If you thought that the Bush-Gore Florida hanging chad controversy created market uncertainty, 2020 could be a repeat, but at a higher order of magnitude because it will occur across multiple state jurisdictions. 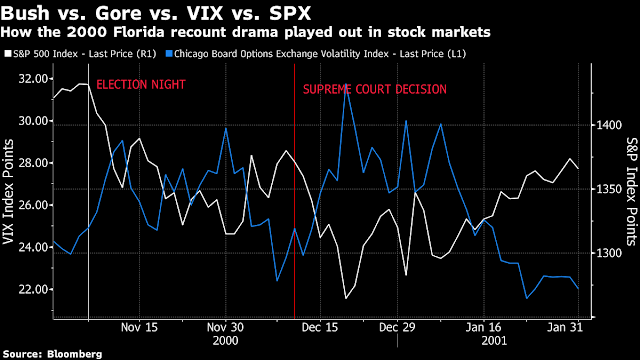 Equally curious is the divergence of the “fundamental” against the market. On one hand, FiveThirtyEight‘s polling average shows Biden’s lead is widening. 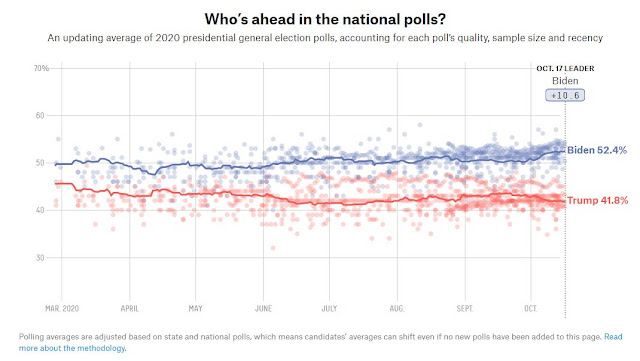 On the other, his market-based betting odds at PredictIt is moving in the opposite direction. A tight race raises the odds of a contested election that ends up in the Courts. What is the market telling us? 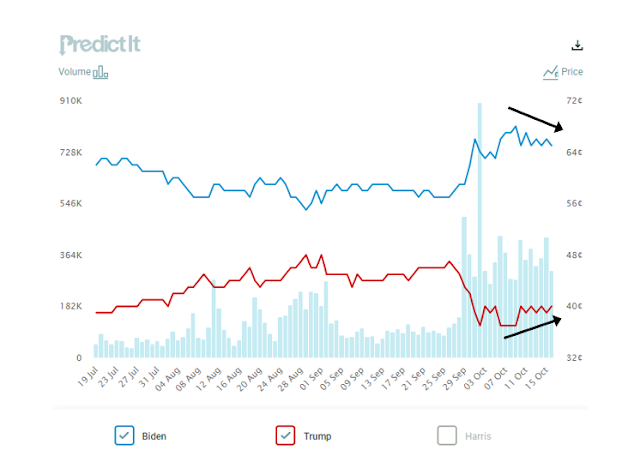 Markets hate uncertainty, and with just under two weeks until the election, the jitters may start to show in the coming days.

Looking past the election, the fundamentals look strong. The preliminary results from Q3 earnings season are positive. Even though it’s still early and only 10% of the S&P 500 have reported, both the EPS and sales beat rates are well ahead of historical averages. Consensus earnings estimates are rising strongly, which is a sign of positive fundamental momentum. 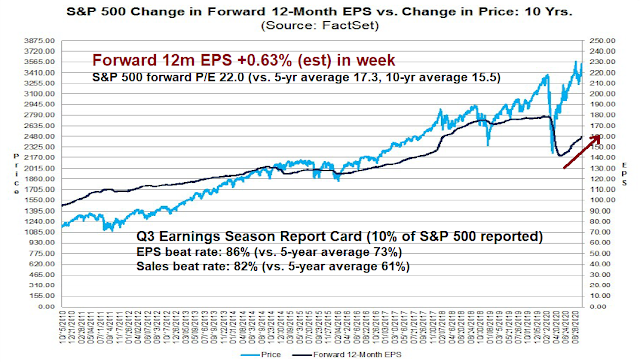 A detailed analysis shows that earnings estimates are rising across the board until Q2 2021. 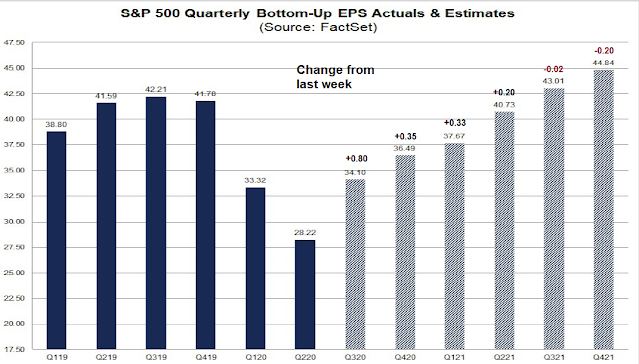 Other market signals indicate that the cyclical and reflation trade is still intact. The all-important industrial metals staged an upside breakout to a recovery high indicating global cyclical strength. 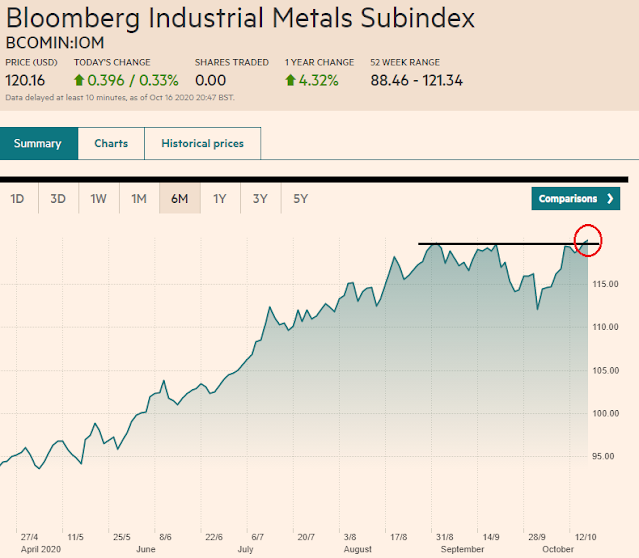 The cyclically sensitive material stocks are also acting well, which is a signal that the global relation trade is still alive. 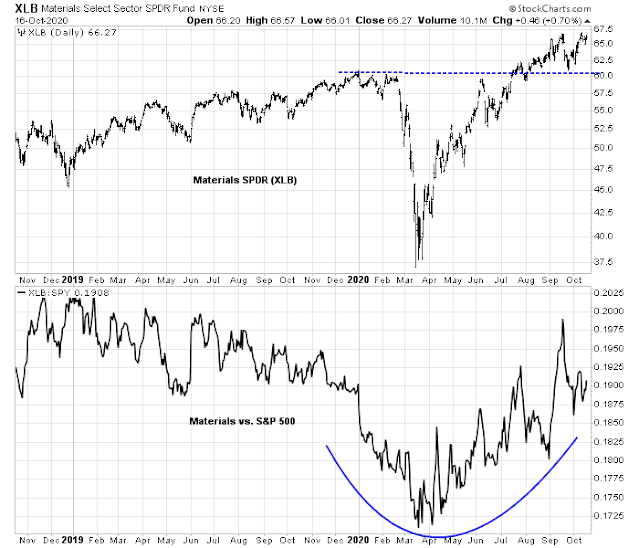 The risk to the reflation thesis is another wave of COVID-19 infection would bring growth to a screeching halt. Scientific American reported, “The Institute for Health Metrics and Evaluation currently projects that more than 360,000 Americans will die by the close of 2020, roughly 150,000 more than the current death toll.” Princeton Energy Advisors estimates the US is headed for 80,000 daily new infections by Election Day. 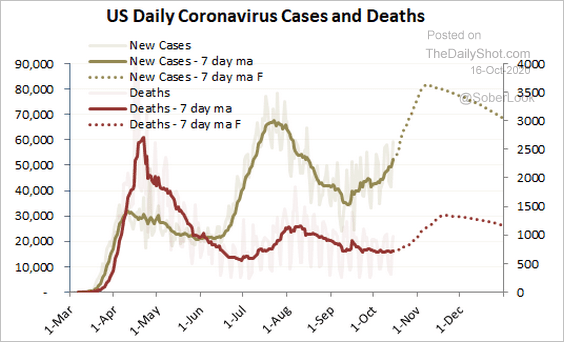 From a technical perspective, there are signs that price momentum may be fading. It was only last week that I highlighted bullish breadth thrust signals (see A Momentum Renaissance and Trading the breadth thrust). Historically, such signals have been equity bullish. 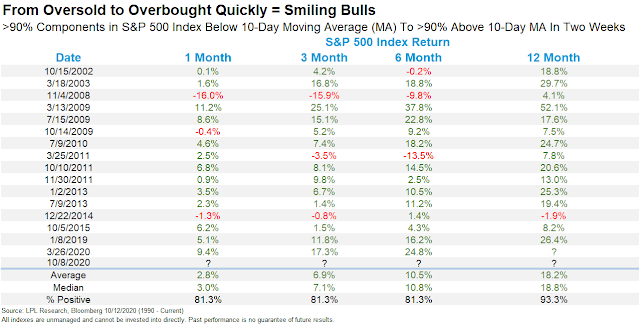 Instead, the expected breadth thrust buying stampede fizzled out. The S&P 500 peaked out last Monday and fell for the rest of the week while exhibiting weakening RSI readings, indicating a loss of momentum. Moreover, sentiment is becoming a little frothy. The 10-day moving average (dma) of the equity-only put/call ratio (bottom panel) fell to levels consistent with recent short-term tops. 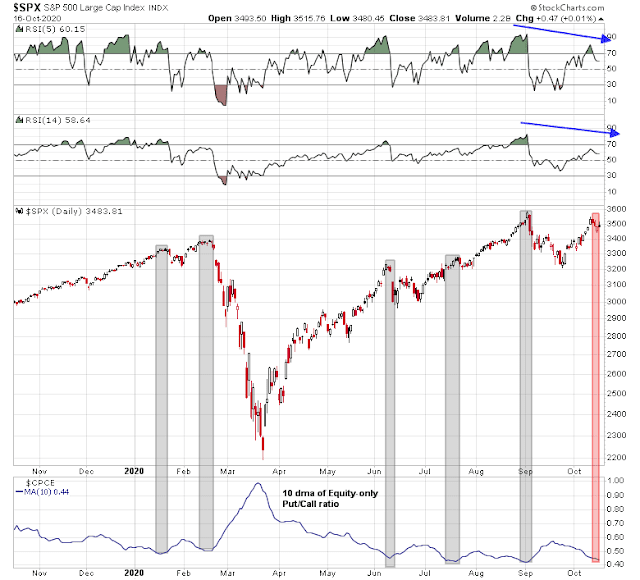 The sentiment warnings were not just restricted to the option market. Mark Hulbert observed that his index of market timing newsletter writers had reached an excessively bullish condition, which is contrarian bearish. 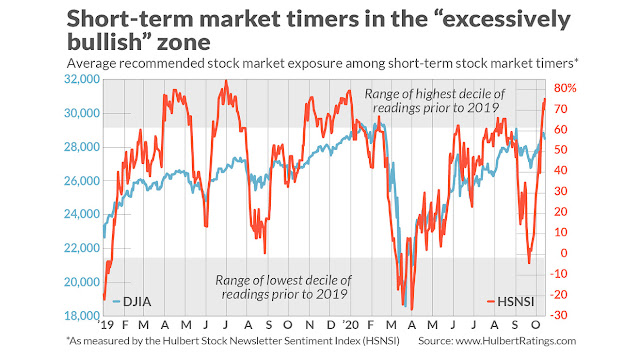 SentimenTrader also pointed out that speculators in equity index futures have swung from a crowded short position of $47 billion to a net long position of $25 billion in the space of three weeks. While buying stampedes can be bullish, but not if momentum fades – which is an indication of buying exhaustion. 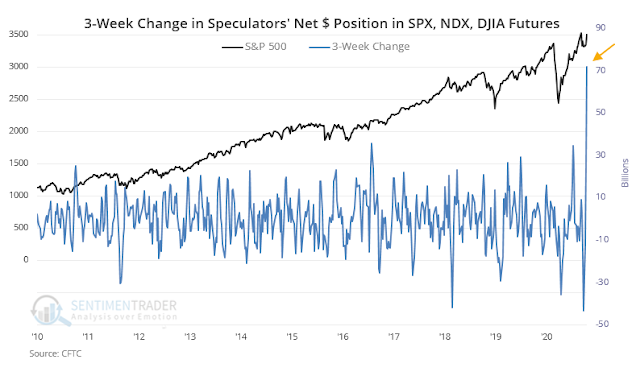 Macro Charts added that aggregate stock to bond futures positioning by large speculators is historically high. He described current conditions at a “significant risk of a large disruption event”. 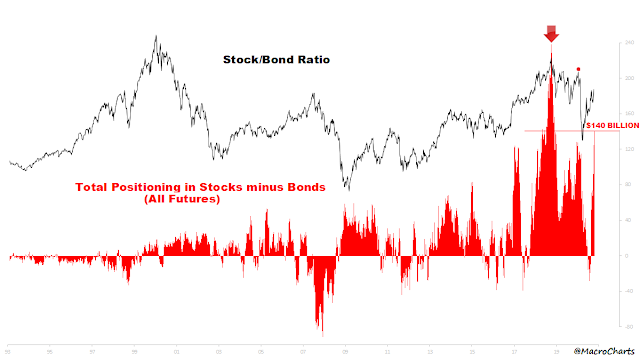 My base case scenario calls for market weakness and heightened volatility until the November 3 election. Tracy Alloway at Bloomberg highlighted a warning from Charlie McElligott of Nomura, and to keep an eye on 3389 for the S&P 500 and 284.63 for QQQ.

One of the biggest stories in markets right now has been the explosion in stock options trading and on Friday, a bunch of those contracts are scheduled to expire. The theory has been that buying of options forces dealers to hedge their books, which then forces the underlying stock higher and encourages even more options trading, especially of bullish calls that benefit as the stock goes up. The concern is that this kind of activity can exacerbate moves on the way down, as much as up. That’s something that arguably happened in August and early September, when the big tech stocks fell dramatically and dragged the indexes down with them.
The point about “what drives something to go up, must also drive it to go down” was brought home in an overnight note from Nomura’s Charlie McElligott. He argues that tech stocks are getting closer to the level at which dealers will “flip” from needing to buy stocks to maintain a neutral portfolio position, to needing to sell stocks to maintain a neutral portfolio position. He estimates this “Gamma” flipping point with somewhat worrying specificity at 3,389 on the S&P 500 and 284.63 on the QQQ Index of tech. 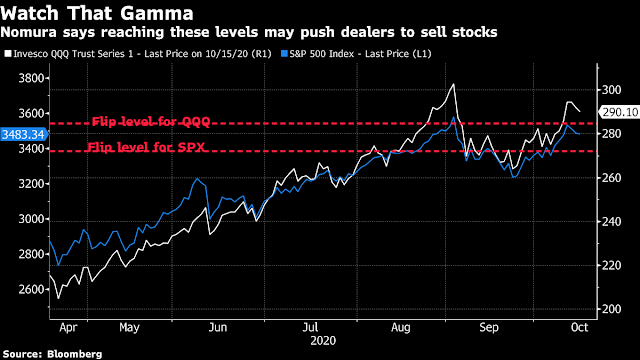 In conclusion, the combination of excessive bullish sentiment and fading momentum are signals of buying exhaustion, which calls for a pullback over the next two weeks. As well, substantial electoral event risk lies ahead. On the other hand, sometimes the anticipation can be worse than the actual event itself. Remember all the anxiety over Y2K? If the market were to crater and panic into the election, it could represent a buying opportunity.
What happens after November 3 is up to the election and market gods.
Disclosure: Long SPXU

18 thoughts on “How the US is becoming an emerging market”