Trading the breadth thrust – Humble Student of the Markets

Mid-week market update:  I discovered an error in my last publication (see A Momentum Renaissance). The market did not achieve a Zweig Breadth Thrust buy signal last Thursday as I previously indicated, though it was very close.

As a reminder, the Zweig Breadth Thrust buy signal is triggered when the ZBT Indicator moves from an oversold to overbought reading within 10 trading days. In my previous publication, I misinterpreted the first day of the window as September 25, it was actually September 24. The ZBT reached an overbought condition in 11 days, not 10, therefore the ZBT buy signal was not triggered. 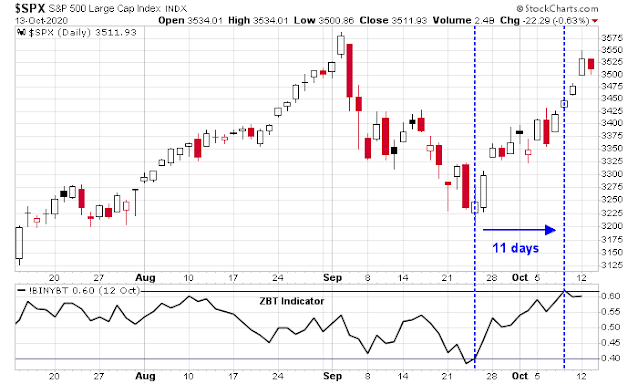 I apologize for the error. Nevertheless, several other breadth thrust signals with less strict criteria were recently triggered, and it is worthwhile analyzing how to trade such conditions.

While the ZBT buy signal just missed its mark last Thursday, Steve Deppe pointed out that the market flashed a Whaley 2:1 Breadth Thrust (WBT) that day. The history of past WBT buy signals is impressive. In the table provided by Deppe below, I have marked the instances where WBT buy signals coincided with the stricter ZBT buy signal since 1990. 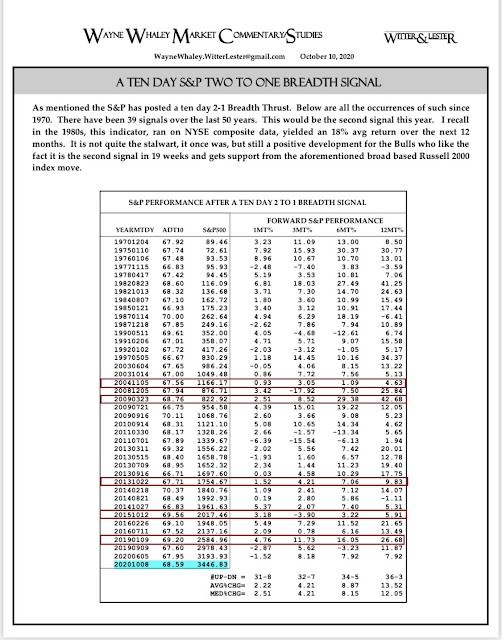 I further analyzed the history of WBT buy signals that exclude the stricter and more powerful ZBT buy signal, and further excluded signal overlaps in two months. There were 18 such buy signals since 1990, and the results are less impressive than first glance. While this class of signals was a better indication that the S&P 500 would rise in the next month, the median return roughly matched the benchmark. Returns over a 3, 6, and 12-month horizons were better, median return alpha peaks and begins to fall off after three months. 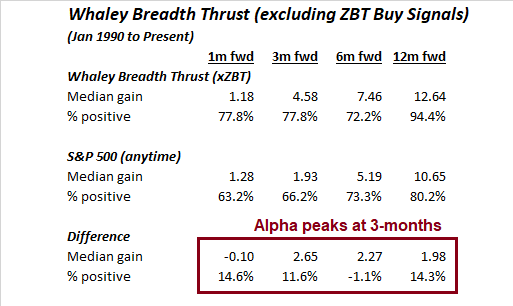 Another disconcerting sign of the latest buy signal is the excessive bullish sentiment, as measured by the 50 day moving average (dma) of the CBOE put/call ratio (CPC). Since the market bottom of 2009, CPC has stayed elevated, and it is unusual to see a WBT buy signal triggered when CPC is so low, indicating excessive bullish sentiment. The last time this happened in early 2014, the market traded sideways. 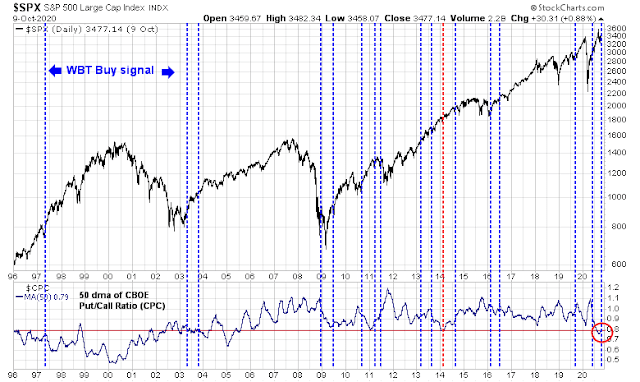 The low put/call ratio is attributable to high speculative activity in individual stock options. Single stock option volumes are spiking again, and there are rumors of another “whale” buying large-cap growth stock call options in the market. Bloomberg reported that a single buyer appeared on Monday, and bought $200 million of single-stock call options. 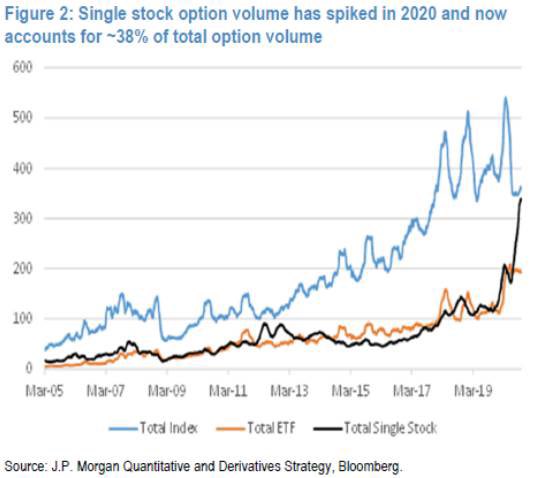 There are other signs that sentiment is becoming frothy. Callum Thomas conducts a weekly unscientific Twitter poll, and the latest readings are at the top end of the historical range. 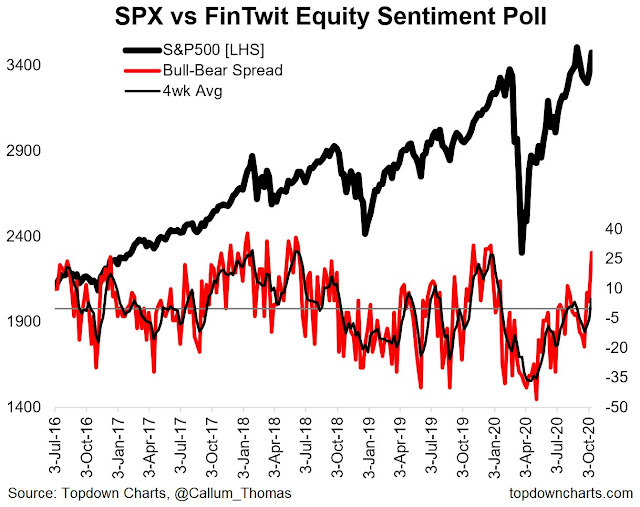 Data from Goldman Sachs Prime Brokerage shows that Equity Fundamental L/S hedge fund leverage already at or near historical highs. These funds are positioned for a Q4 melt-up. 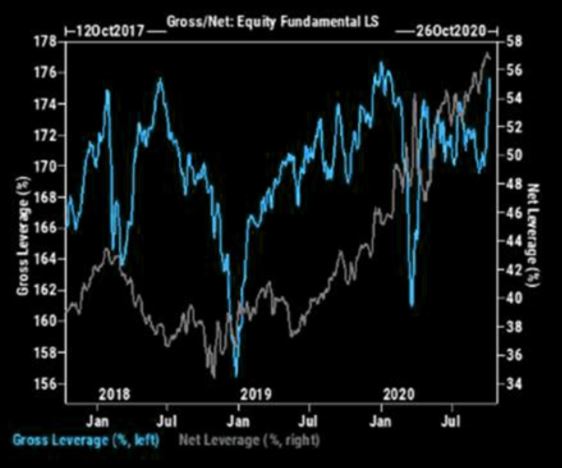 How should investors and traders approach this combination of breadth thrust, which tends to be bullish, and excessively bullish sentiment, which is contrarian bearish?

The answer depends on your time horizon. Tactically, the bullish stampede has seen traders pile into call options, which forced market makers to hedge by buying stock and pushing the market upward. Andrew Thrasher observed that dealer gamma, as measured by GEX, is at an off-the-charts high reading. However, GEX tends to peak out before the market peaks. 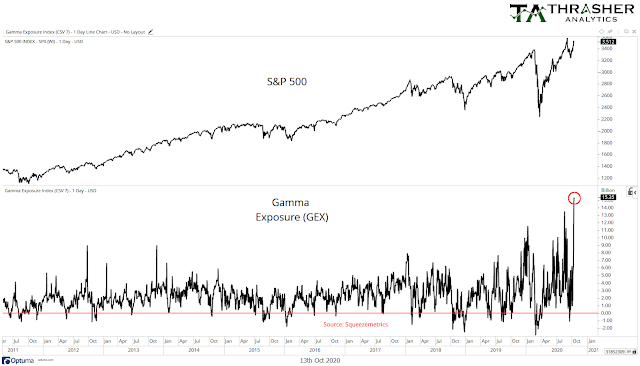 This week is option expiry week, and many stock options will expire this Friday. Dealer exposure will change significantly, and gamma is likely to fall dramatically after the close Friday.

Short-term traders can try to get long and buy here for a scalp into a possible market ramp into Friday’s expiry. After that, all bets are off. Today’s market action was constructive. The S&P 500 retreated and filled the opening gap from Monday, but the NASDAQ 100 did not, indicating that large-cap growth leadership remains intact. 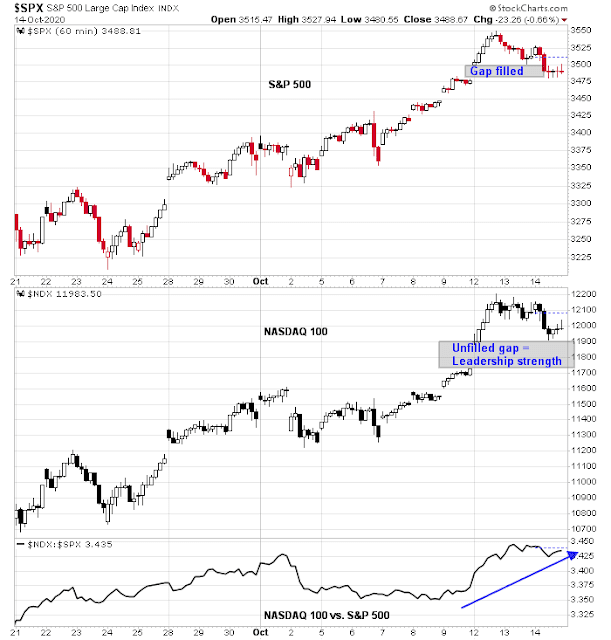 This is a volatile environment, and positions should be scaled accordingly to the expected level of volatility. Otherwise, my intermediate-term outlook remains unchanged. The Asset Allocation Trend Model remains at a neutral reading. The prudent course of action is to stand aside and wait for the volatility to sort itself out.

24 thoughts on “Trading the breadth thrust”