A Momentum Renaissance? – Humble Student of the Markets 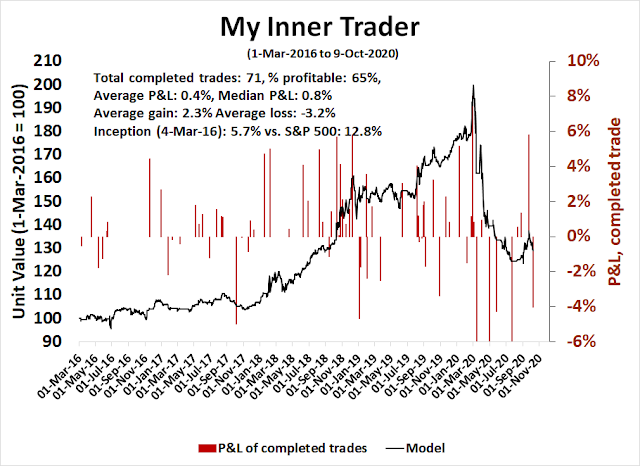 Despite my expectations, the market took on a risk-on tone in the past week, and momentum is making a return. The relative performance of price momentum factor ETFs have been strong since their bottom in early September, and most have made new recovery highs. 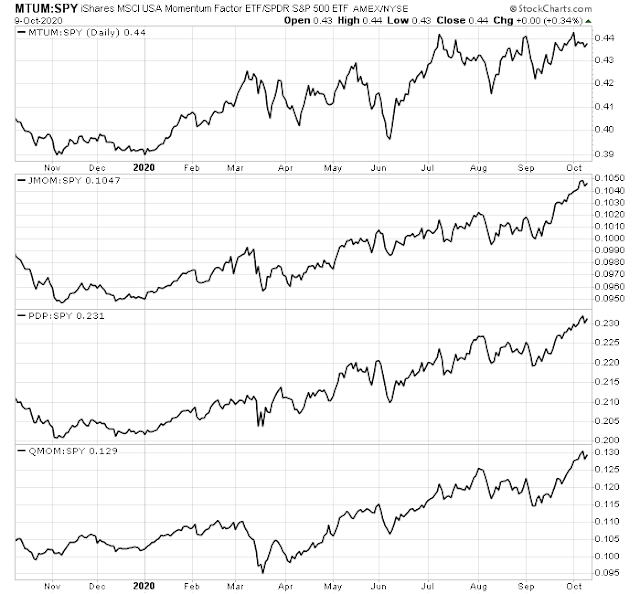 While the price momentum factor describes relative returns, i.e. whether momentum stocks are outperforming the market, absolute price momentum has made a comeback too.
Ed Clissold of Ned Davis Research pointed out that the market achieved a “breadth thrust”, which he defined as over 90% of stocks over their 10 day moving average (dma). Such conditions have historically been very bullish for stocks. 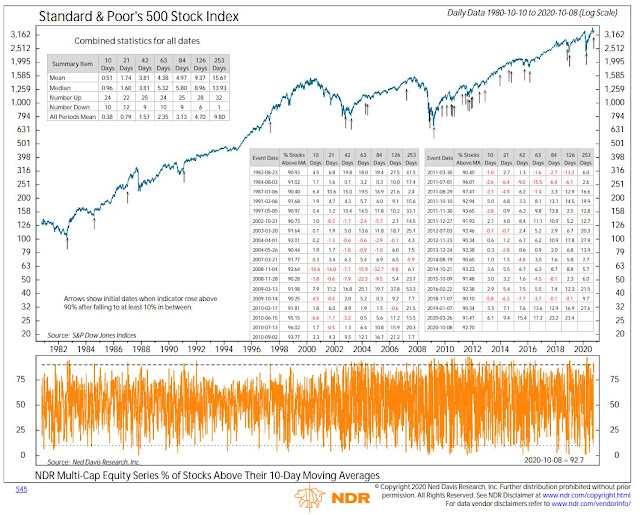 The market also flashed a rare Zweig Breadth Thrust buy signal as of the close on Thursday. The market has to become oversold on the ZBT Indicator, and reach an overbought reading within 10 trading days. Breadth conditions eked out an overbought condition last Thursday, which was the last day of the 10 day window. This is a rare buy signal, and there were only two in the last six years. Historically, ZBT buy signals are very bullish, and tend to resolve in bullish manners in the following weeks, and even over a year. 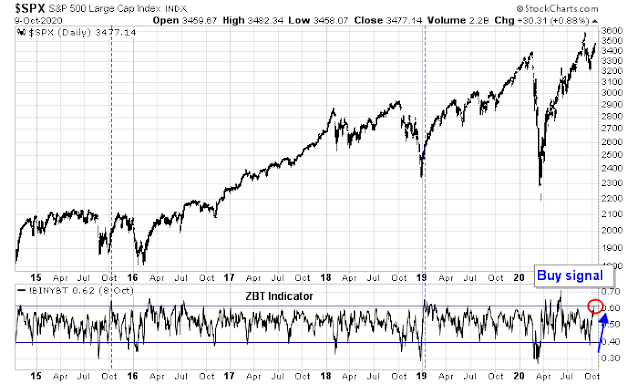 The most recent “failure” of the ZBT buy signal occurred in 2016, when the market rose weakly after the signal, but soon weakened to re-test its previous lows.

Two weeks ago, my Trend Asset Allocation Model was downgraded from “neutral” to “bearish” (see Time to de-risk). At the time, I cautioned that these are trend following models, and these models tend to be slow to react and they will never spot the exact top or bottom. In addition, trend following models run the risk of whipsaw should prices reverse. This is the condition we face today.
Since the downgrade, global markets have taken a firmer tone. In addition, cyclically sensitive commodities such as industrial metals have also rebounded to test the old highs after a brief period of weakness. 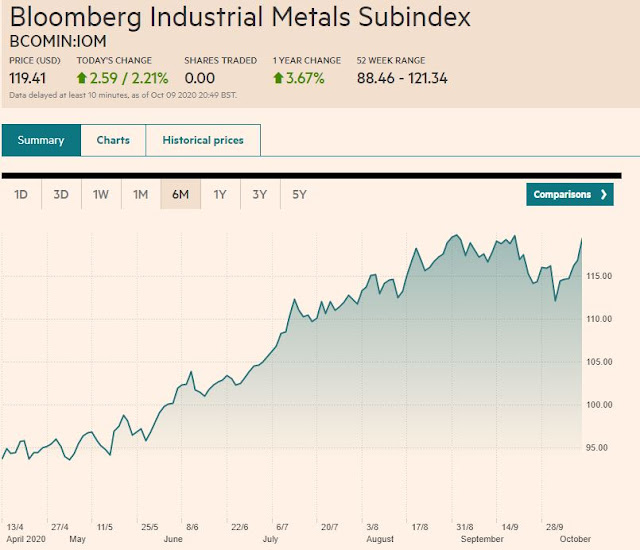 In addition, cross-asset signals from foreign exchange markets have also shifting to a marginal risk-on tone. The USD Index has weakened and breached both its 50 dma and a key support level, which was the site of a recent upside breakout. The USD has been inversely correlated to stock prices (bottom panel), and the highly sensitive AUDJPY cross (red line) has also confirmed the bullish recovery. 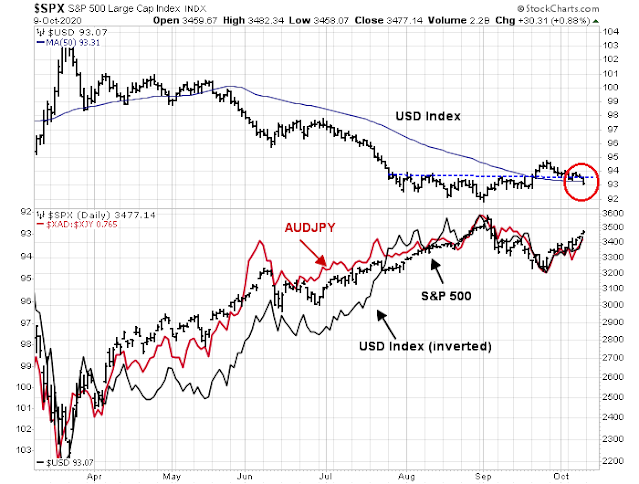 New Deal democrat monitors a series of economic indicators and divides them into coincident, short leading, and long leading indicators. His unusual comment this week confirmed the strength spotted by the Trend Model.

This week I added “best” pandemic readings for many of the indicators (in particular except for interest rates), and I will probably add more next week. Doing so has indicated that almost all of them have had their best readings in the past five weeks, and about half of those this week or last week. Thus, while the course of the pandemic continues to be the decisive issue for the economy, for now that indicates slow improvement has continued.

In short, the Trend Model is capturing the sudden rebound of global asset prices, namely the reversal of the risk-off trend that was evident two weeks ago.

The key risk of this bullish about-face is another whipsaw, as global asset prices have become increasingly volatile and correlated. Short-term sentiment is getting a little giddy, and the market may find it difficult to advance significantly in such an environment.
In particular, the signals from the option market are disturbing. Individual investors (dumb money) tend to use single stock options to trade and speculate, while institutions and professionals (smart money) use index options to hedge their positions. The chart below shows that the 50 dma of put/call ratio (top panel) is very low, which is contrarian bearish. As well, the spread between the equity put/call ratio (CPCE) and index put/call ratio (CPCI) is also nearing a historical low, which is also a bearish signal. 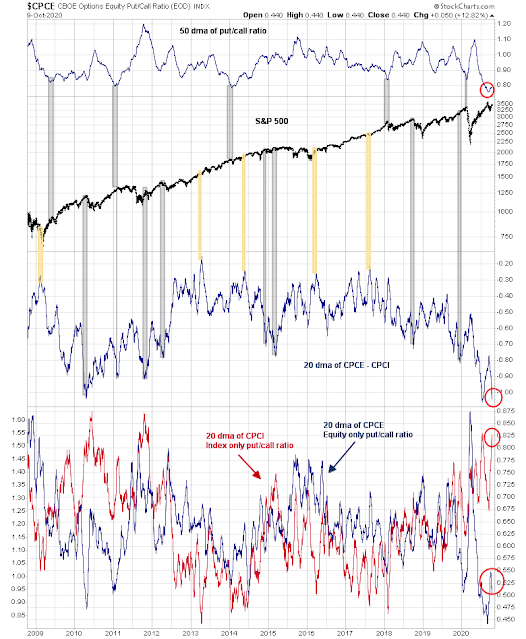 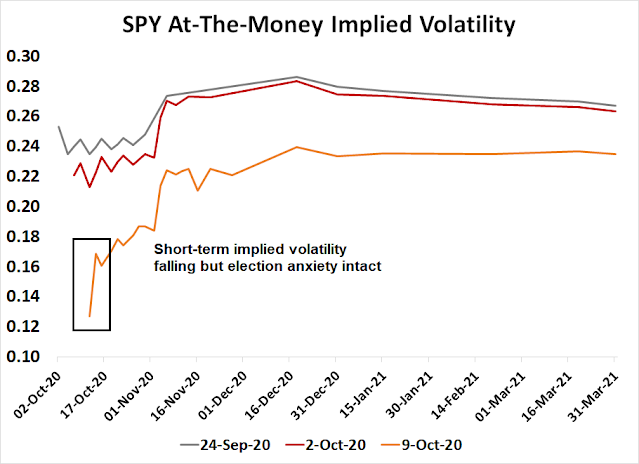 Macro Charts observed that large speculators are in crowded short positions in Treasury bonds, and in the USD, “Extreme Bond AND Dollar positioning could be a big source of instability here – impacting all risk assets.” Much of the fast-money crowd is already all-in long the risk-on and reflation trade from a cross-asset analytical perspective. 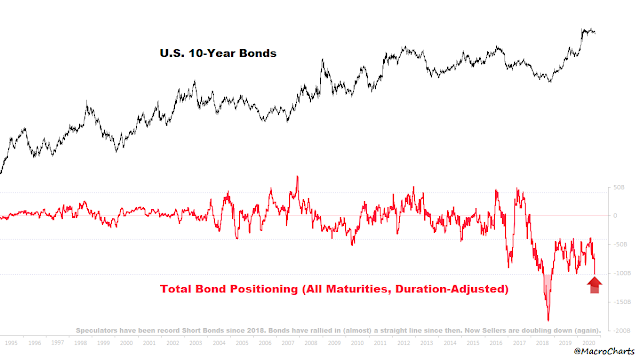 The cover of Barron’s featured a story on the cyclically sensitive industrial stocks. Does this represent a contrarian magazine cover warning on the cyclical reflation theme? 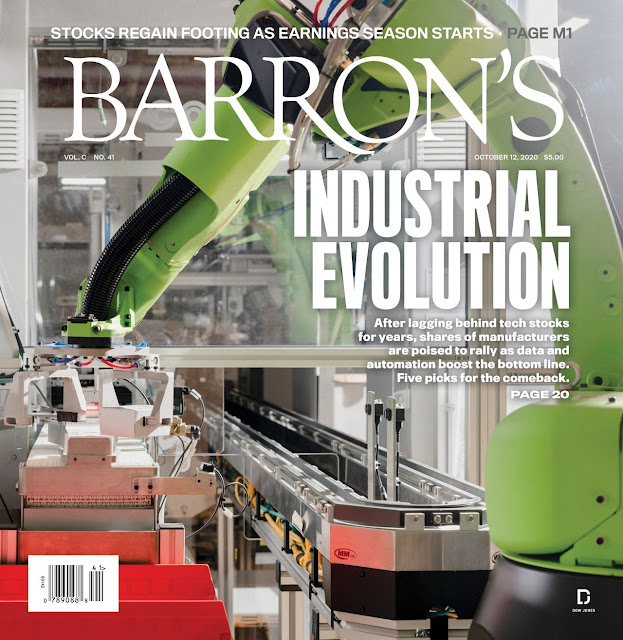 One of the narratives that have been the catalyst for higher prices is the possible passage of a fiscal stimulus bill. The market tanked when Trump tweeted that he was cutting off negotiations with House Speaker Pelosi over a stimulus package. He then reversed course later in the week and called for an agreement. Bloomberg reported that Republican Senate Majority Leader McConnell shot down that idea and indicated that any deal is unlikely before the election:

Senate Majority Leader Mitch McConnell said the differences are likely too big and the time is too short for Congress to agree on a new comprehensive stimulus package before the election, despite President Donald Trump’s renewed interest in striking a deal.
“I believe that we do need another rescue package, but the proximity to the elections and the differences of opinion about what is needed are pretty vast,” McConnell said at an event in his home state of Kentucky.
He also said that while both sides agree on the need for aid to U.S. airlines, that too is unlikely to happen in the next three weeks.

Market expectations a fiscal stimulus bill may be too high.
Across the Atlantic, the relative return of the small cap FTSE 250 to the large cap FTSE 100 is testing a key relative resistance level (bottom panel). This ratio is an important barometer of Brexit sentiment, as small caps are more sensitive to the UK economy than large caps. 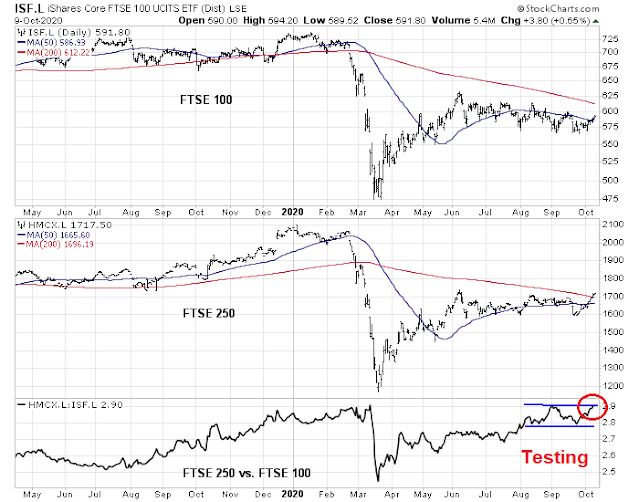 This is another example of heightened expectations. The deadline for a smooth Brexit is approaching quickly, and negotiators are working furious to arrive at a limited deal, which is a significant retreat from the comprehensive Withdrawal Agreement that UK Prime Minister Boris Johnson backed away from.
Expectations may be too high on both sides of the Atlantic.

Looking to the week ahead, it’s difficult to know how the stock market will react in the coming weeks. We have seen numerous October Surprises in 2020 to last several elections. Historically, the month of October has not been equity friendly during election years.

I am monitoring is the NASDAQ 100, which is a key barometer of large cap growth stock leadership. The NASDAQ 100 to S&P 500 ratio is testing an important rising trend line. A trend line violation could be the signal for a risk-off episode, as technology and technology related sectors comprise nearly 50% of S&P 500 weight. 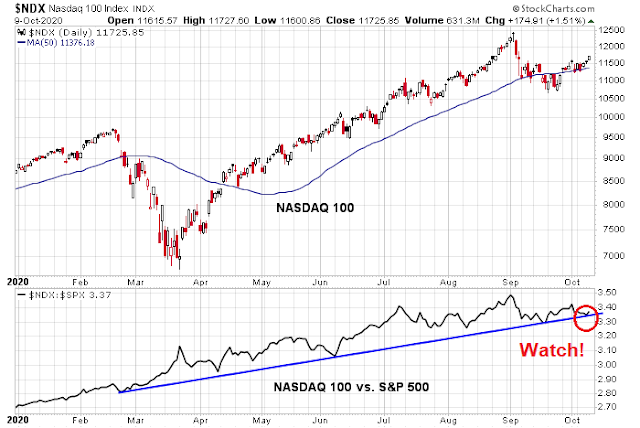 In conclusion, the renaissance of absolute and relative momentum factors is a positive development for equity prices. However, the combination of event risks, excessively frothy short-term sentiment, and uncertain fundamental underpinnings of the recent rally, the odds of a bullish resolution may be not much better than a coin toss despite the historical evidence.
Stay nimble, keep an open mind to all possibilities, and stay tuned for either signs of bullish confirmation, or bearish reversals.

70 thoughts on “A Momentum Renaissance?”