Time to de-risk – Humble Student of the Markets 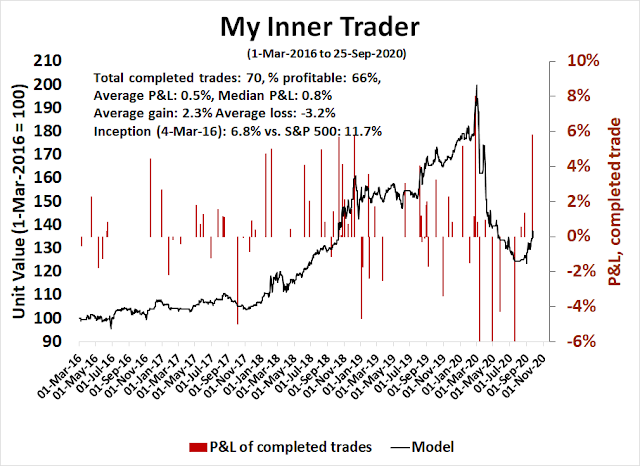 Time to be cautious 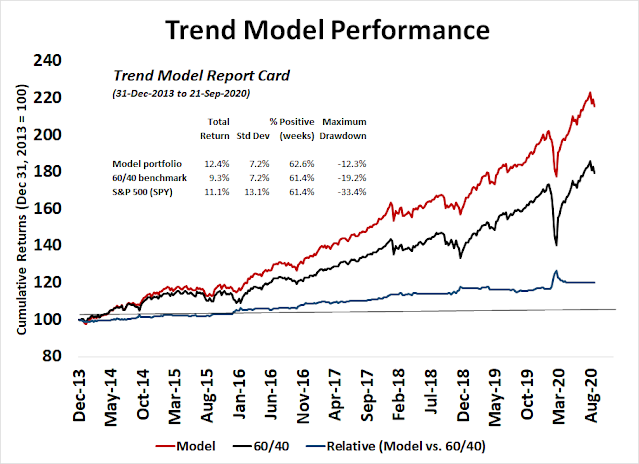 The Trend Model’s signal was upgraded to neutral from bearish on May 15, 2020 and it has remained in neutral ever since. Recent developments have caused it to turn more cautious. Here is why.

A tour around the world

The Trend Model applies trend following principles to a variety of equity and commodity prices around the world. There have been numerous technical breakdowns that have sparked general risk-off conditions on a global basis. Let’s take a tour around the world and assess conditions.
Starting in the US, we can see that the S&P 500 and NASDAQ 100 have decisively breached their 50 day moving averages (dma). While the NASDAQ 100 is trying to consolidate sideways, the small cap S&P 600 is even weaker, as it is trading below both its 50 and 200 dma. 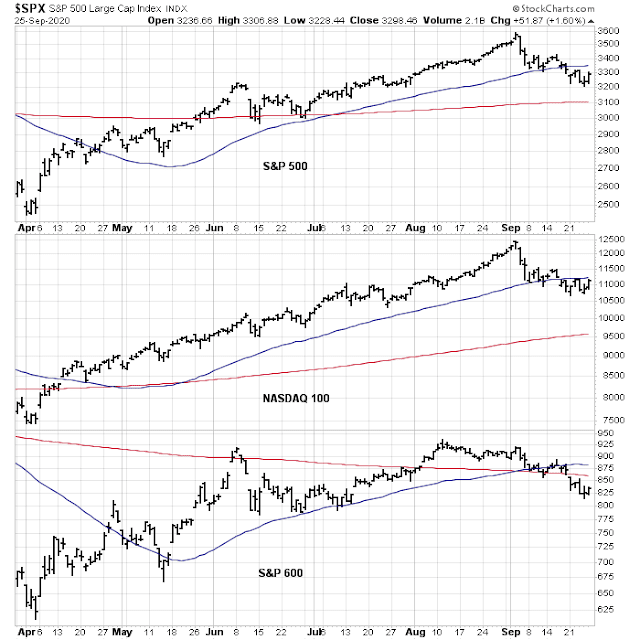 Across the Atlantic, the Euro STOXX 50 has also breached both its 50 and 200 dma. The other major core and peripheral stock markets are also showing signs of weakness. 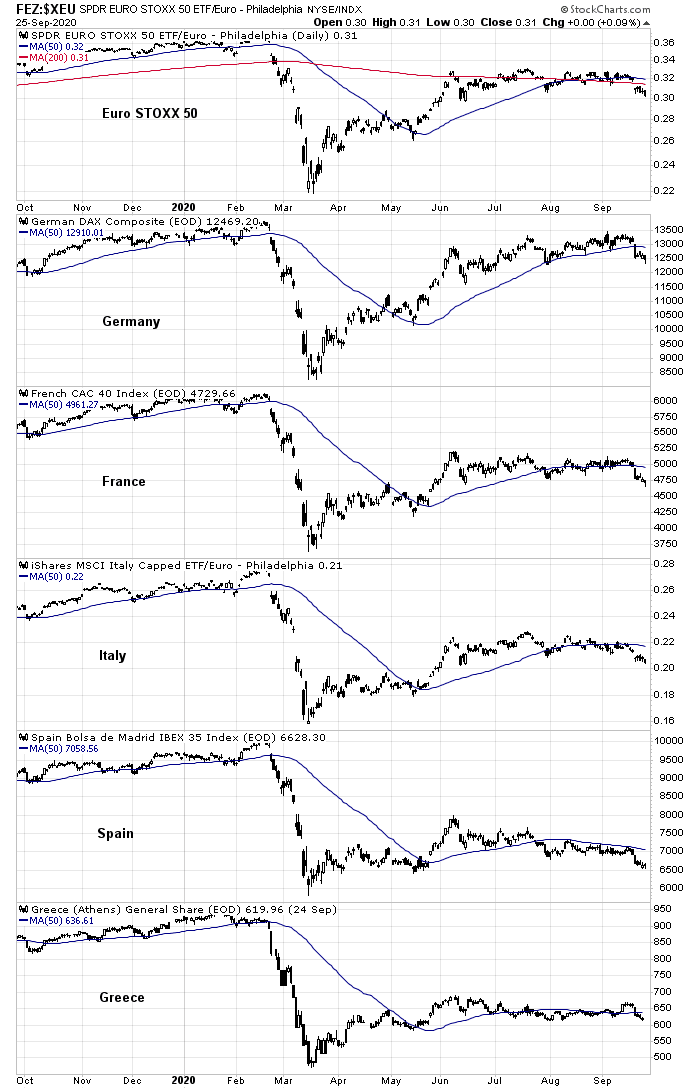 Across the English Channel, both the large cap FTSE 100 and small cap FTSE 250 are showing signs of weakness. The relative performance of the FTSE 250 to FTSE 100 has pulled back to test a relative support level, largely over increasing anxiety about the collapse in Brexit talks. 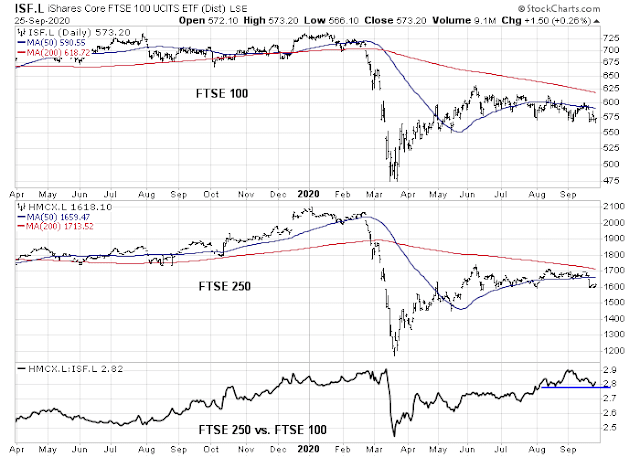 Over in Asia, the performance of China and the markets of her major Asian trading partners are also weak. The Chinese stock market is dominated mainly by retail investors, who treat it like a casino. That’s why I focus mainly on the signals from the other Asian markets. All of them are showing differing signs of weakness. In particular, the downside support violations in Hong Kong and Taiwan are especially ominous. 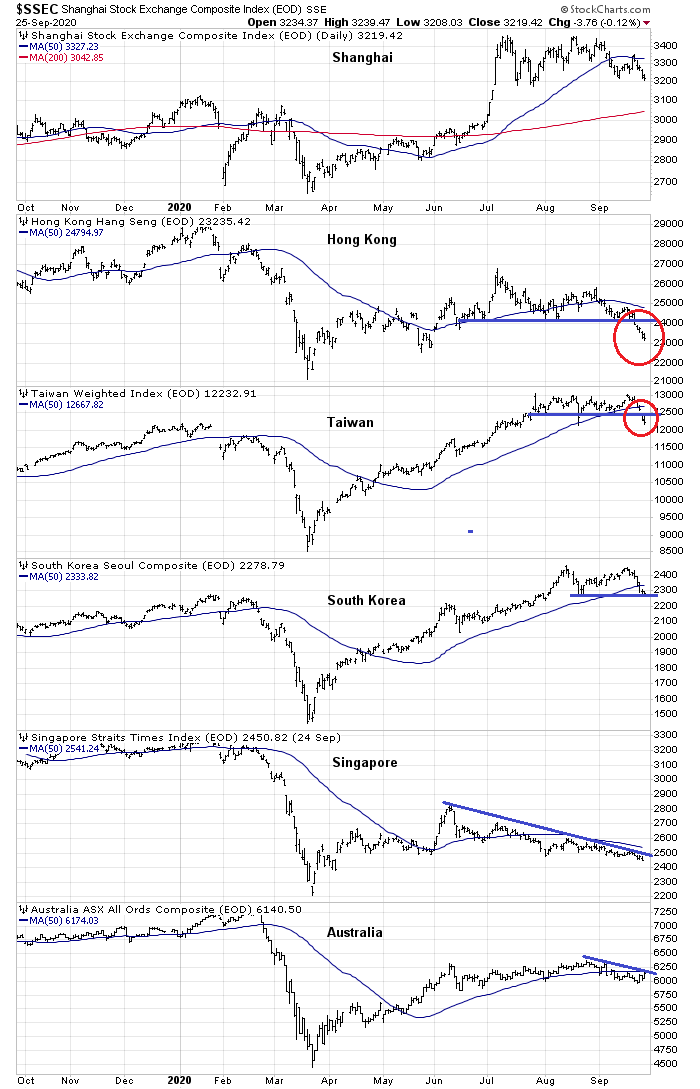 Cracks are showing up again in the mountain of debt in China. The plight of China’s largest property developer, China Evergrande, may be the canary in the Chinese coalmine. Reuters reported that Evergrande, which is highly indebted, pleaded with local authorities for debt support:

The time has come for China to confront a too-big-to-fail quandary. In a letter to local government officials, highly indebted property developer China Evergrande contends that if it doesn’t secure approval soon for its reverse merger plan, it will wreak widespread havoc. Although the company says the missive is fake, the questions in it regarding systemic risk are real for investors and Beijing.

Evergrande beseeched officials in its home province of Guangdong for assistance with a so-called back-door listing, according to a copy of the Aug. 24 letter, whose authenticity was confirmed by Reuters sources. The idea, first proposed as part of an October 2016 restructuring, was for subsidiary Hengda to combine with a publicly traded state developer. If the deal doesn’t happen by January 2021, a group of investors can demand repayment of some 144 billion yuan, or about $21 billion, all of Evergrande’s cash as of June 30.

The one bright spot in Asia is Japan. The Nikkei Index price pattern remains constructive. However, there are three major trading blocs in the world, anchored by the US, Europe, and China. Japan is becoming a peripheral player from a global perspective.

Commodity prices can also be an important signal of global reflation or deflation. The message from commodities is one of caution. The Invesco-DB Commodity Index, as represented by the ETF DBC, has breached both its 50 and 200 dma. Gold prices have weakened in response to falling inflation expectations as hope fades for a fiscal response from Congress. The cyclically sensitive copper price has retreated to test its 50 dma. 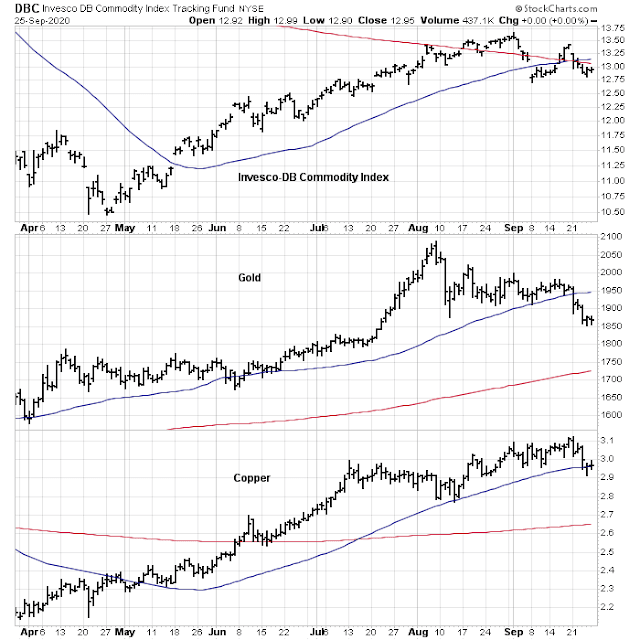 A change in tone 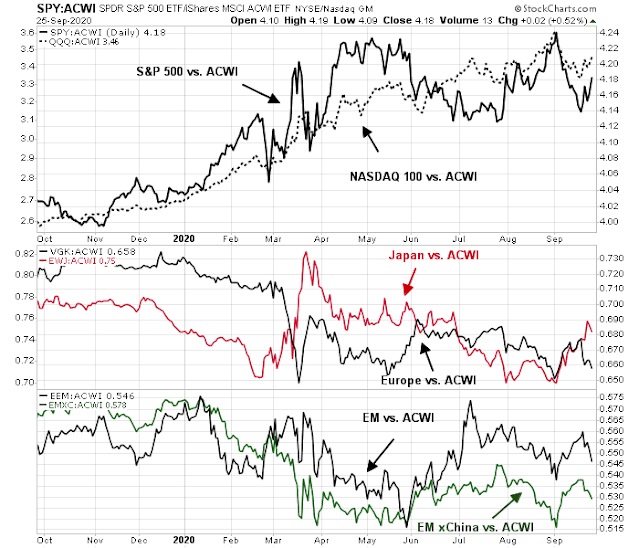 From a trend following viewpoint, these are all signs of a change in global trends. Coupled with a general weak tone in global equity and commodity prices, it is time for asset allocators to adopt a more cautious tone and de-risk portfolios. This cautious signal is also consistent with my past observation of a bearish 14-month RSI negative divergence in the Wilshire 5000, just after it flashed a bullish MACD buy signal. As a reminder, the last RSI divergence sell signal occurred in August 2018 (see Market top ahead? My inner investor turns cautious), which resolved with a mini-bear market that ended with the Christmas Eve panic of 2018. 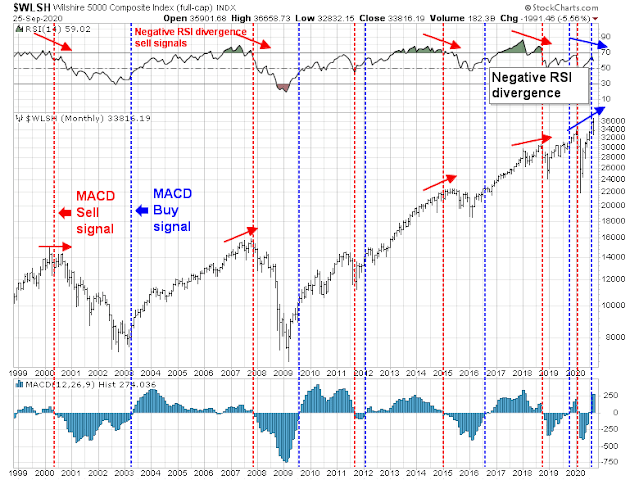 The key risk to the bearish call is that the Trend Model is already too late in its cautiousness. SentimenTrader pointed out that large speculators and trend following CTAs are already in a crowded short in equity futures, which is contrarian bullish. 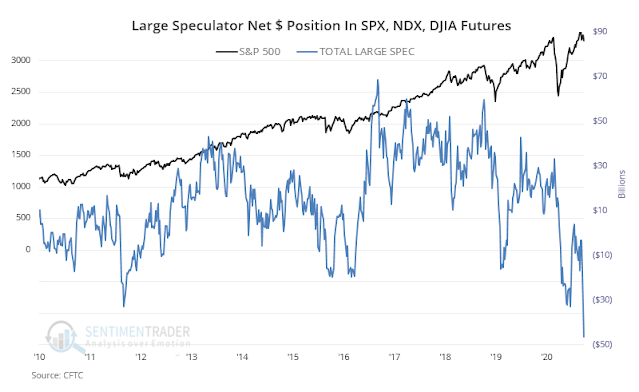 However, analysis from Callum Thomas showed that when futures positions are normalized for open interest, the net short speculative position isn’t as severe. In fact, large speculators were correct in their positioning at market extremes during and before the GFC. 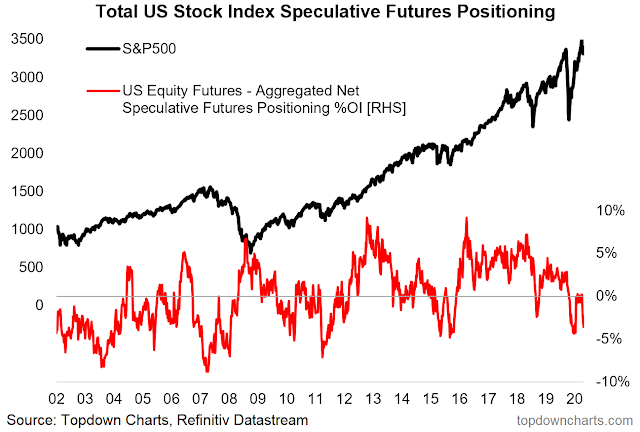 Trend following models, by their nature, are slow to react to trends. They tend to be late, and they will never get you in and out at the exact top and bottom. This is a feature and not a bug. Investors therefore need to be prepared for relief rallies in the short run. Nothing goes up or down in a straight line.

The market faces a critical technical test early in the week. The market leadership NASDAQ 100 is testing overhead resistance at the 50 dma. The bulls need to demonstrate some momentum to show that they are regaining control of the tape. The bears need to hold the line at the 50 dma, and preferably to push relative returns below the rising trend line. 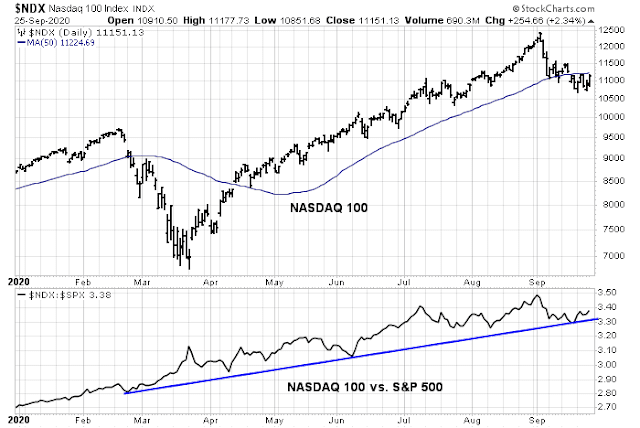 The bulls will have a tough task ahead of them. The market is already overbought on the percentage of NDX stocks above their 5 dma. 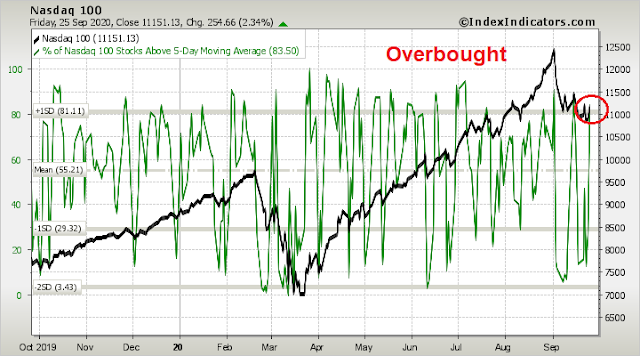 The percentage of NDX above their 10 dma remains in a falling channel of lower lows and lower highs. A decisive upside breakout will be a positive development. 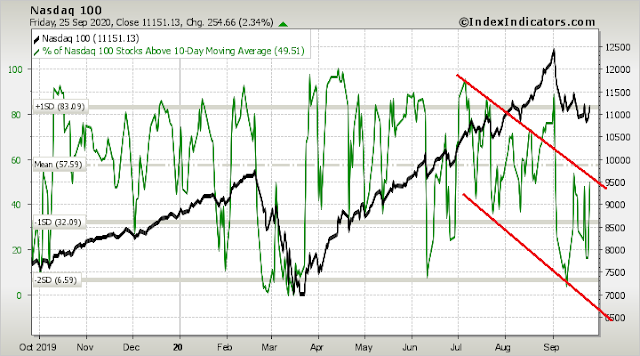 In terms of event risk, we have the first scheduled debate between Biden and Trump on Tuesday, September 29. As there are very few undecided voters in this polarized electorate, the debate is unlikely to move the needle, but there is always the possibility of a stumble by one or both candidates. In addition, there is a flood of Fed speakers, and the September Jobs Report is due on Friday.
In conclusion, a review of global equity and commodity markets reveals a growing risk-off trend, which is a signal for investors to be more cautious in their asset allocation. This bearish signal is confirmed by a monthly RSI negative divergence sell signal that was triggered in August 2018, just before the market fell by -20% into the Christmas Eve panic bottom of that year. In the short run, the market may be too stretched to the downside, and a relief rally is always possible. Nothing goes up or down in a straight line but the risk/reward is tilted to the downside.
Disclosure: Long SPXU