Election jitters are rising – Humble Student of the Markets 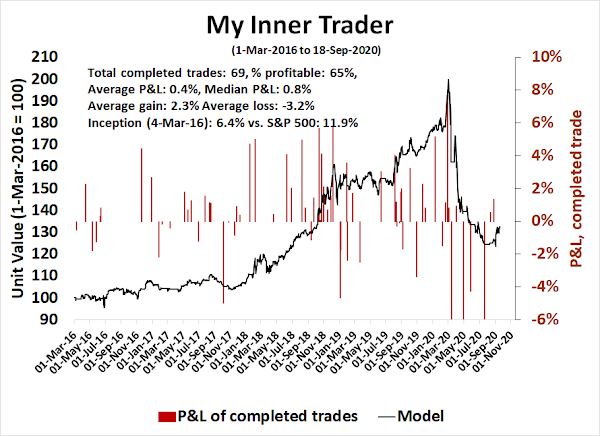 Marketwatch also reported that analysis from BNP Paribas shows that the implied equity market volatility over the election window is sky high compared to past realized returns of election results. 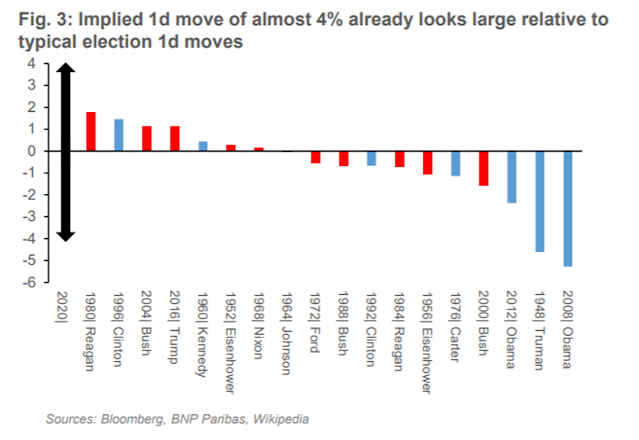 In addition, all these option readings were taken before the news about the death of Supreme Court Justice Ruth Bader Ginsburg. Should the election results be contested and wind up in the Supreme Court, the odds of a 4-4 deadlocked decision just rose with Ginburg’s death, in which case the lower court’s decision would stand. This raises the odds of judicial and constitutional chaos. Imagine different states with wildly inconsistent decisions on balloting. The Supreme Court nomination fight also raises the political resolve of both sides in Congress. Don’t expect any stimulus bill before the election, and even a Continuing Resolution to fund the federal government beyond September 30 is in jeopardy. Watch for implied volatility to rise in the coming week.
It seems that the bears have taken control of the tape, based on a combination of election uncertainty and a reversal of excessive bullish retail positioning on Big Tech stocks.

The S&P 500 and NASDAQ 100 are experiencing major technical breaks from both short and intermediate term perspectives, which is leading to the conclusion that the correction isn’t over.
In the short run, the daily chart of the market leadership NASDAQ 100 violated both a rising trend line and its 50 day moving average (dma), which are important levels of psychological and technical support. As Big Tech sectors (technology, communication services, and Amazon) comprise 44% of S&P 500 index weight, weakness in the tech heavy NASDAQ 100 is an important indicator of the direction of the broader market.

The S&P 500 also violated an important rising trend line and exhibited a minor break below its 50 dma.

The weekly chart of the S&P 500 is just as ominous. The index has broken down through a breakout turned support level for two weeks. In addition, the stochastic has recycled from an overbought reading, which is an intermediate term sell signal. 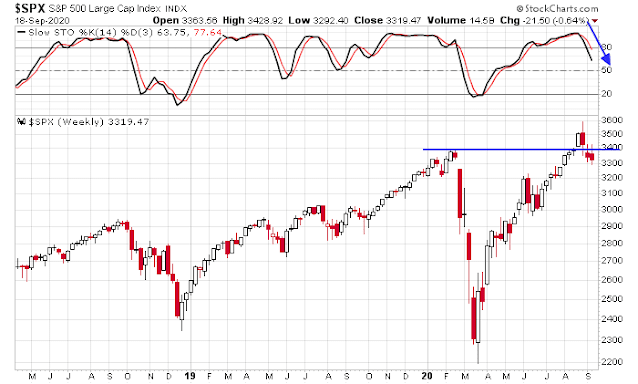 The weekly chart of the NASDAQ 100 also flashed a similar stochastic sell signal. 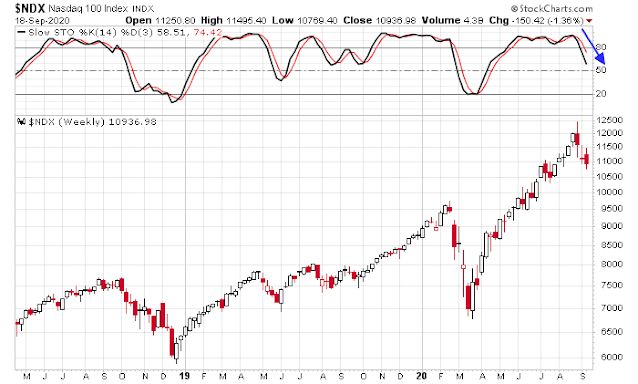 These conditions lead me to believe that an intermediate term correction has begun, and will not be complete until the election in early November.

The second major reason for the bearish break is the unwind of excessive bullish sentiment among retail traders. There has been an explosion of stories about the speculative activity among Robinhood traders due to the attraction of its zero commission policy, and the frenzy has spread to other major online brokerage firms. The froth was quite evident when even TMZ began publishing sponsored articles about day trading.

Moreover, retail call option activity has exploded. An astute reader pointed out analysis from SentimenTrader showing that while retail call volumes have receded, they are still very high and small traders are still very bullish. Despite the pullback in the popular Big Tech stocks, SentimenTrader wrote that bullish sentiment remains elevated and it has not fully capitulated.

Clearly, there was a big pullback in speculative volume last week, dropping off by more than 50% from the upside panic to start September. But when zooming out, we can see that last week was still higher than any previous record high, by far. 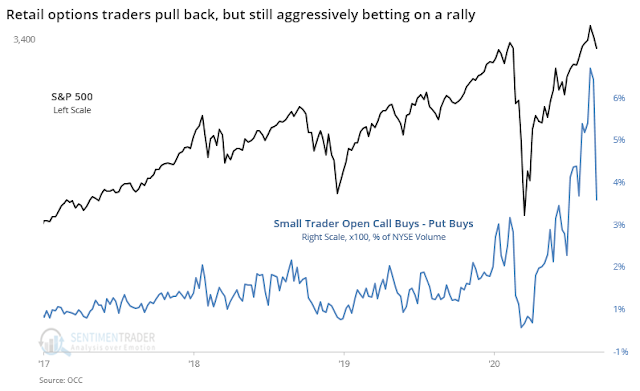 The market has been devoid of the panic that marks intermediate term bottoms. The Fear and Greed Index is falling, but the reading is only neutral. 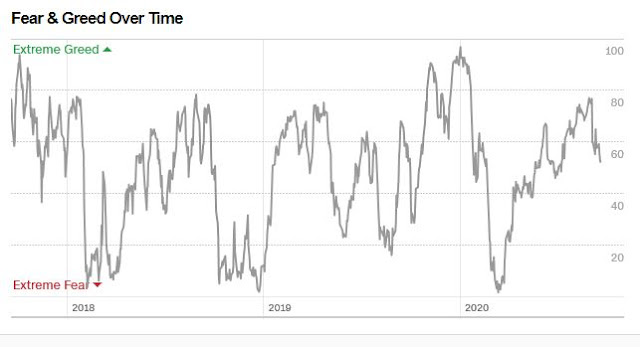 The weakness in the NASDAQ 100, which had been the market leadership, is especially disconcerting. BoA pointed out that FANG short interest is extraordinarily low, indicating that short covering demand will not put a floor on these stocks as they weaken. 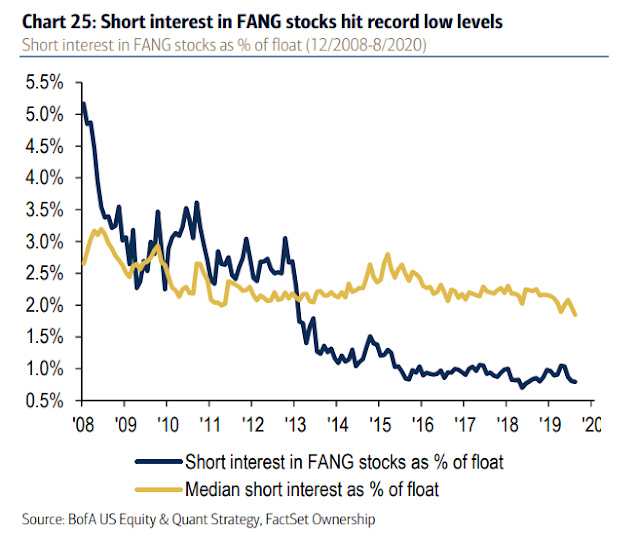 Moreover, the market’s retreat has been orderly. The percentage of stocks above their 10 dma are in a downward sloping channel of lower lows and lower highs. 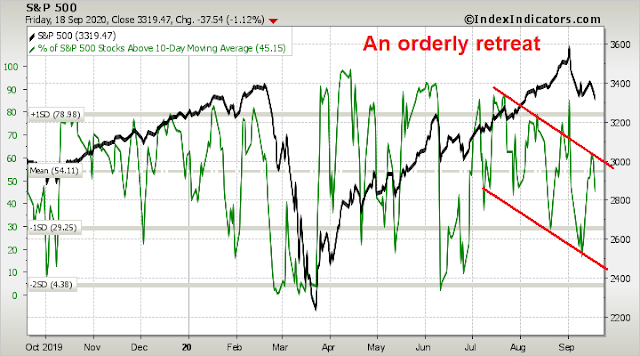 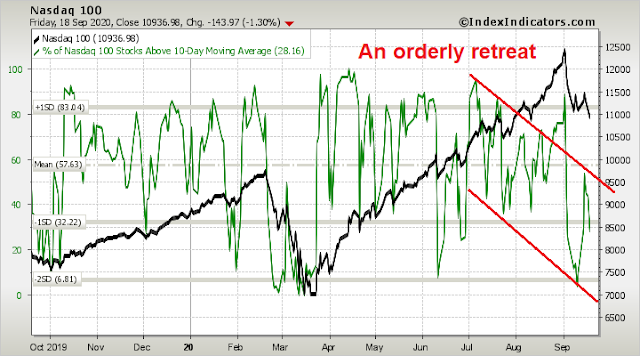 In conclusion, the bears have taken control of the tape. Traders should brace for a period of weak and choppy markets until the November election and beyond. Much will depend on the course of electoral fortunes. The Presidential debates lie ahead, and there is always the possibility of an October surprise. Moreover, there is a high level of uncertainty over whether the election results would be contested in the courts, or even worse, in the streets, after November 3. It is therefore difficult to formulate downside target levels, except to say that the combination of sentiment and technical indicators are not pointing to a bottom today.
Disclosure: Long SPXU

81 thoughts on “Election jitters are rising”