A healthy rotation into cyclical stocks? – Humble Student of the Markets

There is growing evidence that the stock market is undergoing a rotation from large cap technology to cyclical and reflation stocks. Exhibit A is the market action of the tech heavy NASDAQ 100, which violated a key rising channel and also violated its 50 day moving average (dma). By contrast, the broader S&P 500 is testing its 50 dma and only exhibited a minor break. 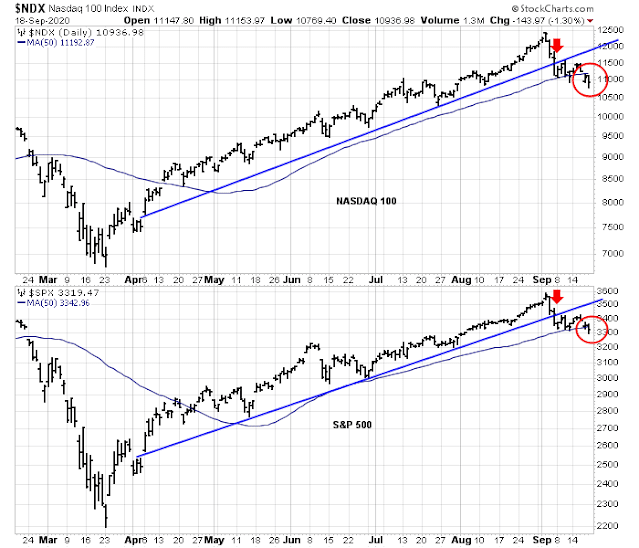 Even as the S&P 500 and NASDAQ 100 struggled, Material stocks have been making new all-time highs, and its performance against the S&P 500 has decisively turned up. 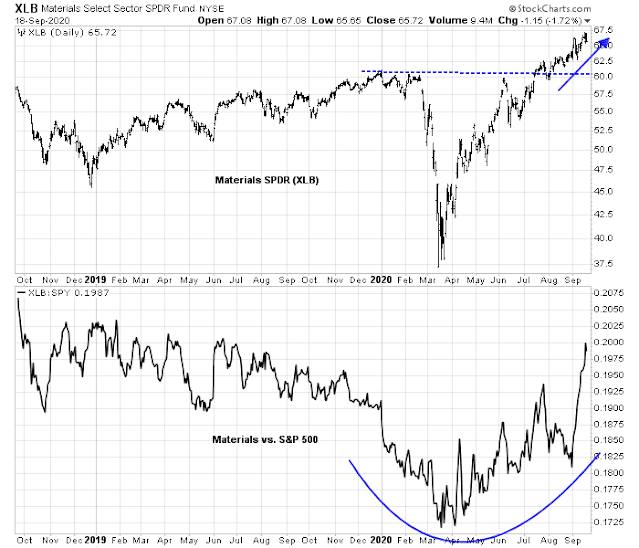 The rotation into the reflation and cyclical theme has been in evidence for a few months. The August BoA Global Fund Manager Survey showed that global managers were positioning for global reflation. 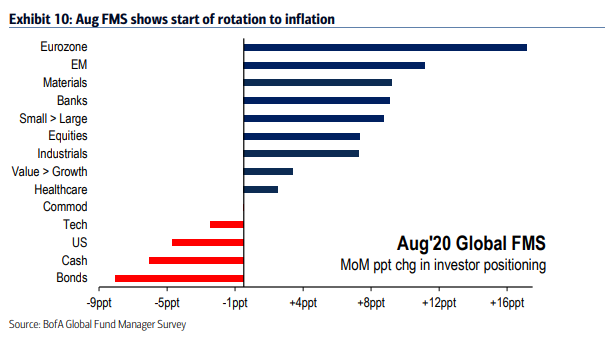 The September survey shows that the shift is continuing. While month-to-month readings can be noisy, managers continued the trend of buying industrial stocks, value over growth, small caps over large caps; and selling tech. In addition, managers regard US large cap tech to be the most crowded trade. 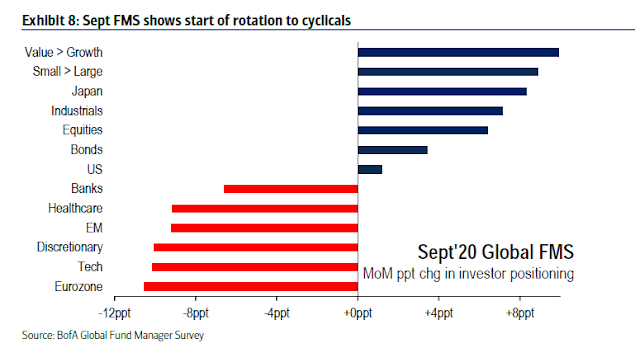 This weakness in large cap technology is overdue. Sentiment is becoming frothy, as evidenced by this tweet from Jim Bianco of Bianco Research. 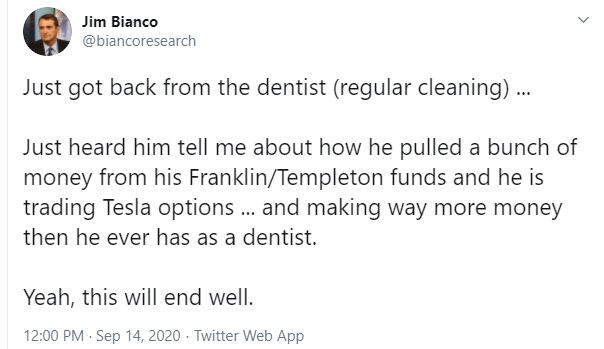 To be sure, US large cap technology profits have outperformed the rest of the economy. The combination of better profitability and investor enthusiasm has made Big Tech now accounts for 44% of the weight of the S&P 500. 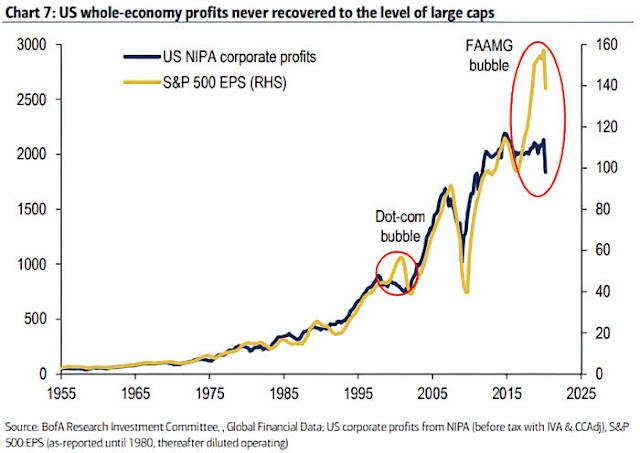 However, Cormac Mullen at Bloomberg pointed out that there are cheaper ways of gaining large cap technology exposure. The S&P Asia 50 Index is just as concentrated in Big Tech names, with Tencent, Samsung Electronics and chipmaker TSMC as its three biggest stocks, accounting for over 40% of index weight. The S&P Asia 50 Index trades at 14x forward earnings compared to 27x for the NASDAQ 100. 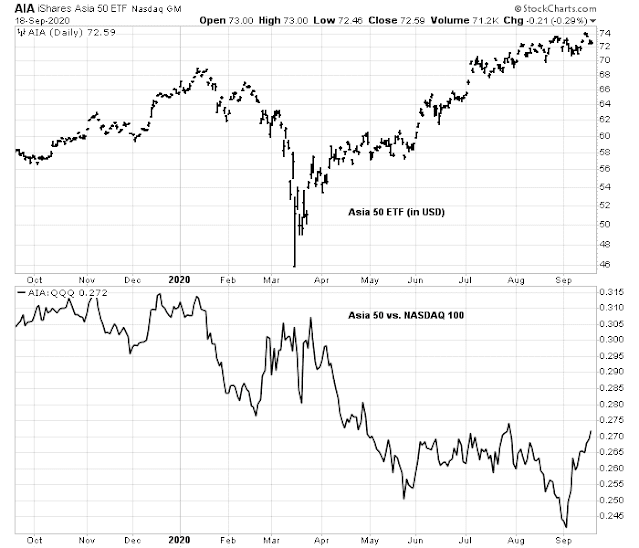 There is also extensive evidence of sector rotation under the market’s hood from the behavior of small cap stocks. These sets of charts are designed to disentangle sector and size performance by answering the following questions: 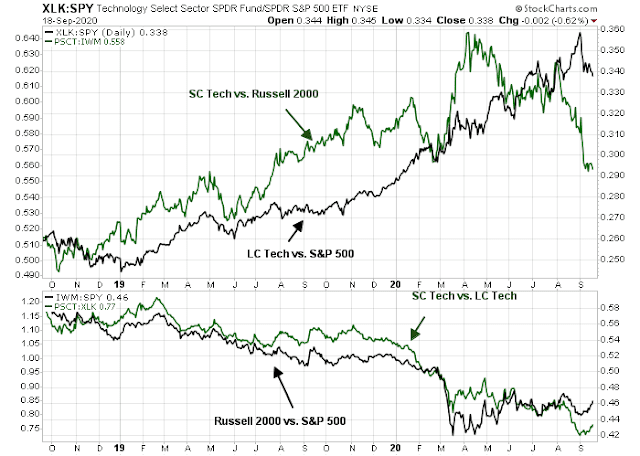 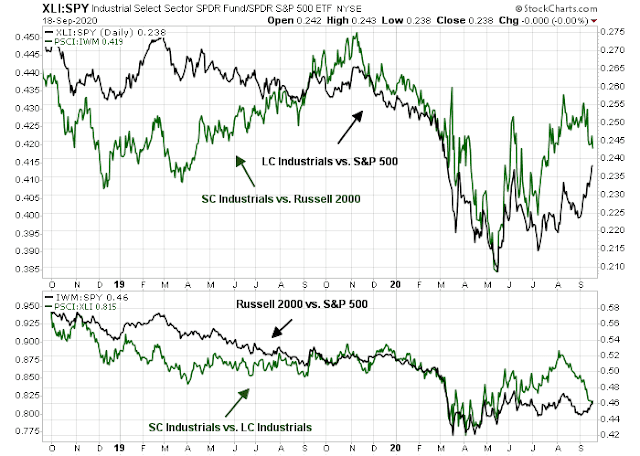 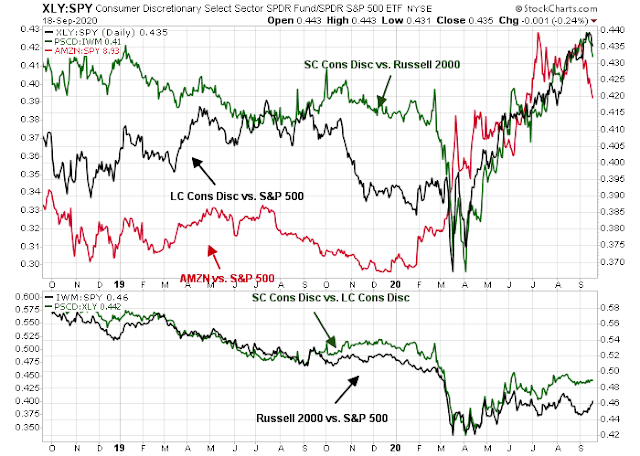 There are several key risks for investors who want to jump on the cyclical and reflation trade. One risk is the global cyclical rebound may be a Chinese mirage. China is a voracious consumer of commodities, and its cyclical rebound has been powered by a policy-driven industrial production revival at the expense of the domestic economy. The signals from commodity prices may therefore be a mirage, and they may not be sustainable if global consumer demand does not rebound.
Well-known China watcher Michael Pettis explained the nature of China’s unbalanced and uneven recovery in an FT Alphaville article.

This recovery isn’t sustainable without a substantial transformation of the economy, and unless Beijing moves quickly to redistribute domestic income, it will require either slower growth abroad or an eventual reversal of domestic growth once Chinese debt can no longer rise fast enough to hide the domestic demand problem. 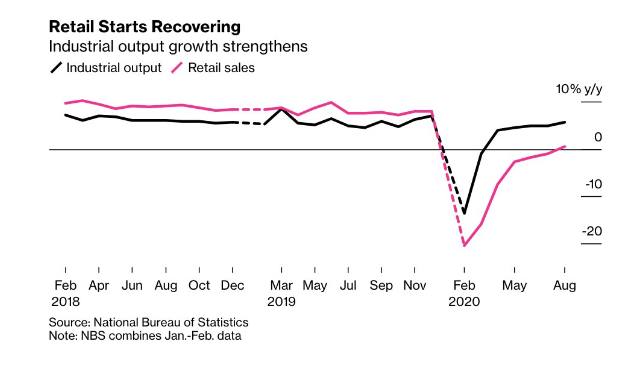 The markets are already starting to discount the risks of an unsustainable recovery. The stock markets of China and its major Asian trading partners have flattened out after several months of gains. 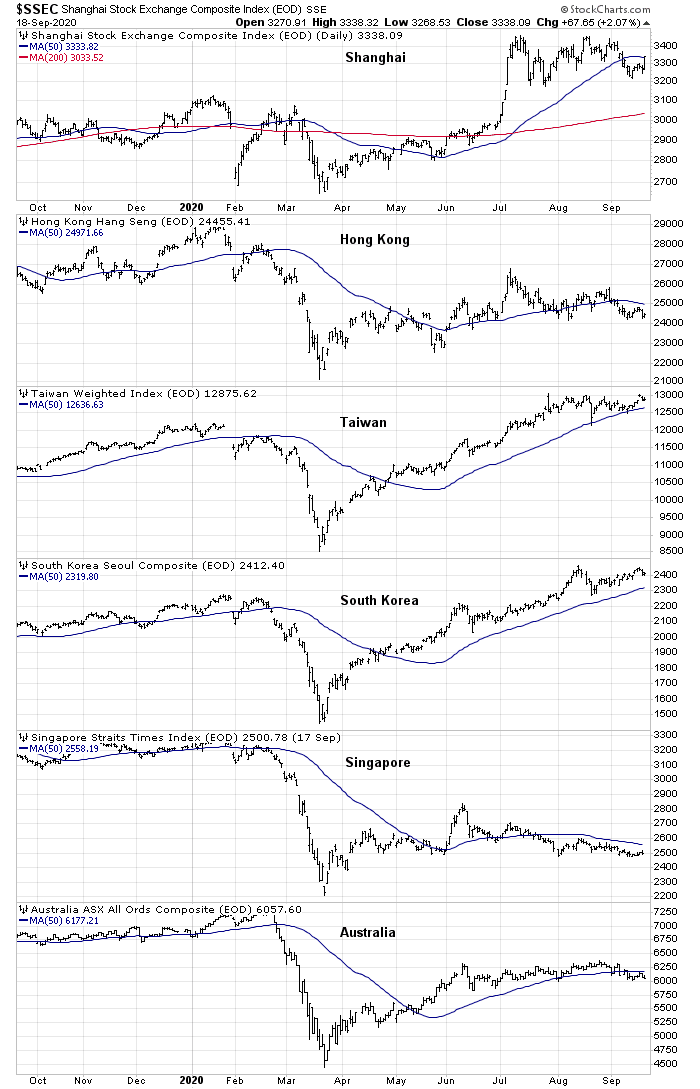 From a global perspective, the Citigroup regional Economic Surprise indices, which measure whether economic data is beating or missing expectations, are peaking and in the process of rolling over. This is an indication that the momentum of the recovery is starting to stall, which is bearish for the cyclical recovery thesis. 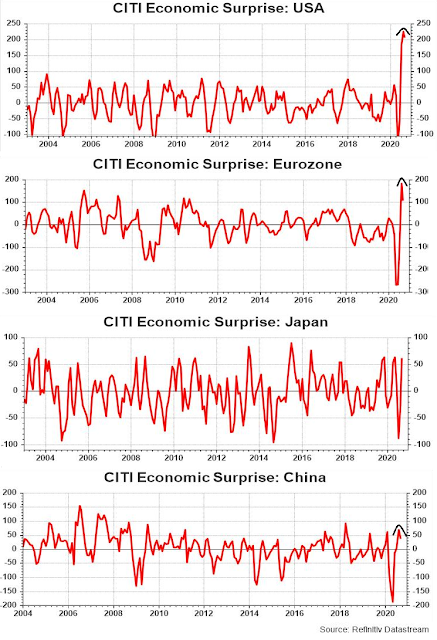 The second key risk for investors is a credit crunch that brings economic expansion to a halt. In the past, the usual sequence of events in a recession is: recession, credit event and blow-up, and banks tighten credit in response. As the extent of the credit event and blow-up becomes known, the stock market anticipates the monetary response and recovers. This time, the stock market rallied even before any signs of a credit blow-up.
To be sure, the Fed has stepped in with an extraordinary level of accommodation, but while the Fed can supply liquidity, it cannot supply solvency. Only the fiscal authorities can make the decision to rescue firms that get into trouble. Fed Chair Jerome Powell made it clear that under the “Main Street Lending Facility”, 13(3) requires good evidence that the borrower is solvent. Dodd-Frank made it more difficult to do emergency lending in 13(3) on purpose. In the absence of further fiscal support, expect mass small and medium business bankruptcies.
The real estate sector is especially vulnerable to a credit crunch. In the past, tightening credit conditions led to softness in commercial real estate prices. In addition, tenant eviction moratoriums puts increasing financial pressures on residential property landlords, and a credit blowup in real estate is on the horizon if Congress doesn’t take action. 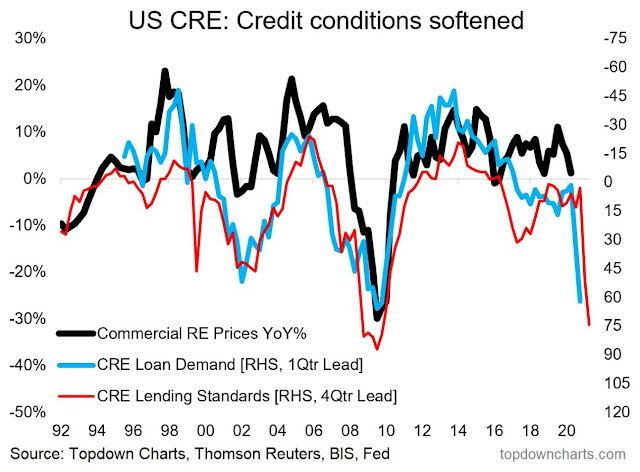 Both large and small cap REITs are lagging the S&P 500, with no bottom in sight. 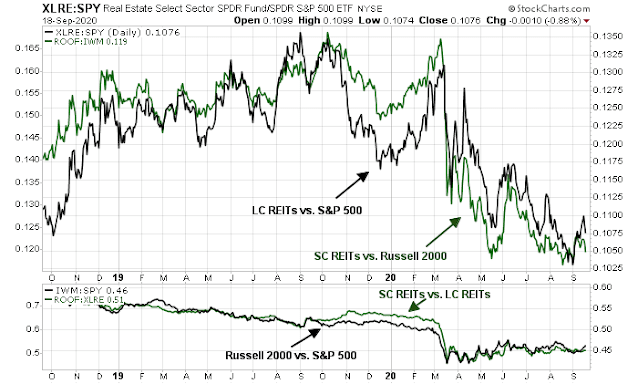 The combination of a possible credit event, and financial repression will pressure on banking profitability. The Fed’s Summary of Economic Projections (SEP) from the September FOMC meeting shows that it expects inflation, as measured by core PCE to be 1.7-1.9% in 2022 and 1.9-2.0% in 2023, and its Fed Funds projection to be 0.1% in 2022, and 0.1-0.4% in 2023. While the initial reaction that this was a dovish pivot by the Fed as it is making an implicit promise to not raise rates until 2023, it also implies a significant period of negative real policy rates, which is a form of financial repression that destroys bank margins. As well, if the Fed is to hold rates down until 2023, it will also have to eventually engage in yield curve control to hold down rates further out in the yield curve, which will also pressure bank margins.

Lastly, investors need to consider why the market would rotate from large cap tech and growth to cyclicals and value. During recessionary and slow growth periods, the market bids up growth stocks in an environment of scarce growth. As a recovery broadens out, sector and style rotation shifts into cyclicals and value as growth becomes more abundant.
This brings up two problems. First, economic recovery depends on the effectiveness of health care policy, fiscal policy, and monetary policy, in that order of importance. The effectiveness of global health care policy remains a question mark, as this pandemic needs to be controlled all over the world to prevent reservoirs of the virus from leaking out to spark periodic outbreaks. In addition, the US fiscal policy response has been uneven, even though monetary policy makers are doing all they can to backstop the economy.
In addition, a rotation out of Big Tech into cyclical sectors presents a liquidity problem. The weight of Big Tech is 44%, which is over double the size of the cyclical sectors. Investors deploying funds out of US Big Tech will need to find better opportunities either abroad or in other asset classes. This will mean lower overall stock prices. 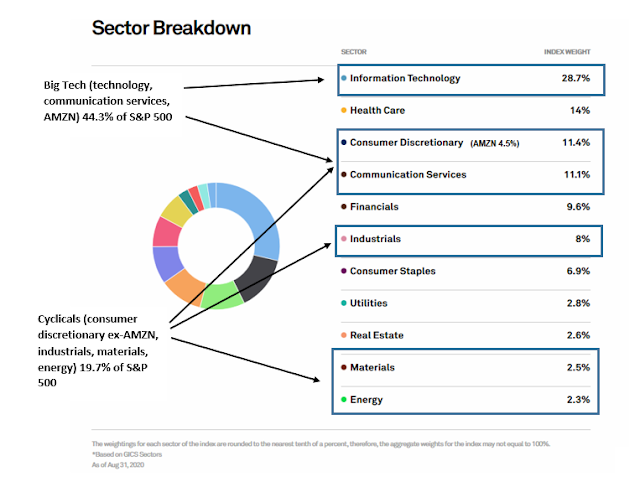 In conclusion, the market has been undergoing a rotation from US large cap tech into stocks with cyclical and reflationary exposure. Whether the rotation is a “healthy” one remains to be seen. There are several risks if investors were to hop on the cyclical rotation theme. The global cyclical revival may not be sustainable; a credit crunch sparked by tightening lending requirements could stop the recovery in its tracks; and the rotation could put downward pressure on the S&P 500 because of the massive weighting of Big Tech stocks compared to cyclical sectors.
Under these conditions, investors are advised to focus first on risk, rather than return expectations. SKEW, which measures the cost of hedging tail-risk, is elevated indicating a high level of uncertainty as we approach the election in November. Volatility may stay heightened if a clear resolution isn’t known after November 3.

As I pointed out before, the path of economic recovery depends on health care policy, fiscal policy, and monetary policy, in that order of importance. Until there is greater clarity about the path of health and fiscal policy, there will be few catalysts that reduces equity implied volatility and tail-risk – and that’s the probable reasoning behind the elevated SKEW.

9 thoughts on “A healthy rotation into cyclical stocks?”