Brace for the volatility storm – Humble Student of the Markets 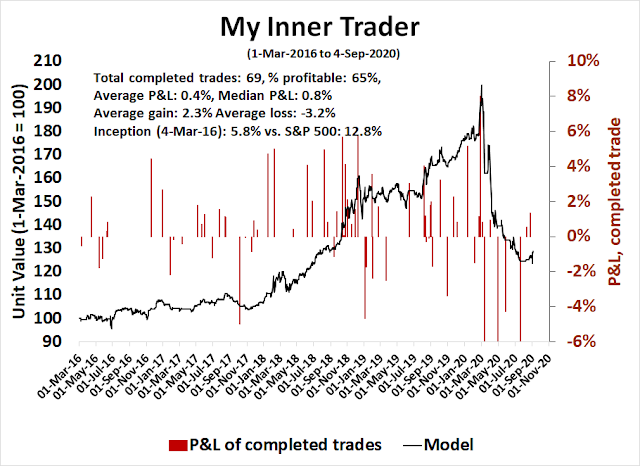 Why Are VIX and S&P 500 Moving Together?
Something odd is happening in the equity option market. 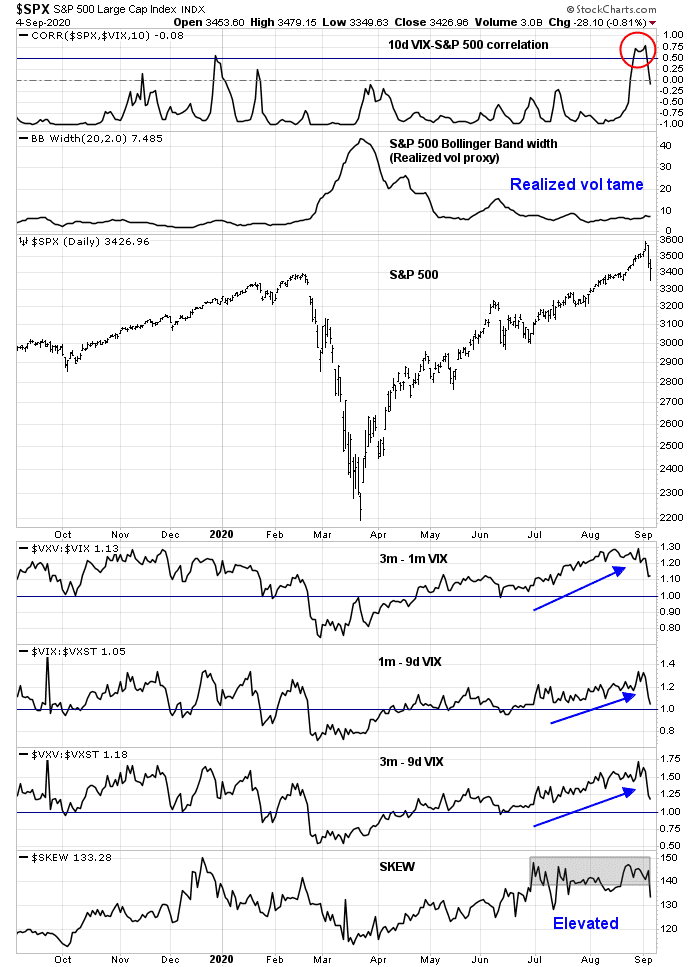 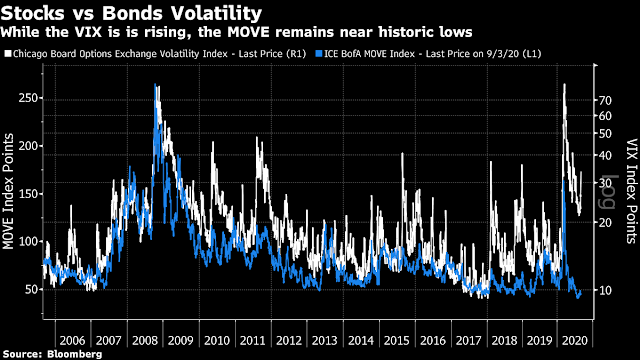 Historically, high correlations between SPX and VIX have usually led to market sell-offs. Under a minority of circumstances, they have also signaled market melt-ups. How can we explain these unusual conditions in the option market?

I present two explanations for the option market anomaly, which are not mutually exclusive. The Financial Times pointed out the market is pricing in an exceptionally pronounced volatility surge around the US election in early November in anticipation of electoral chaos. 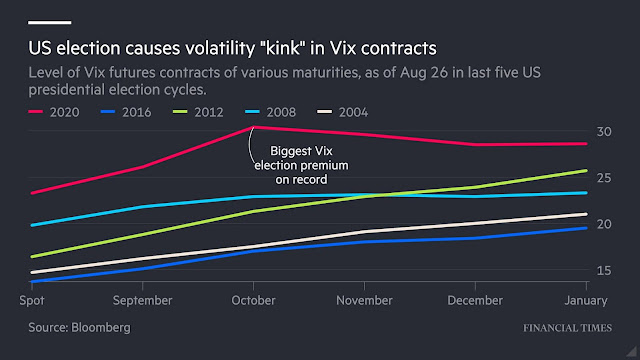 A top Democratic data and analytics firm told “Axios on HBO” it’s highly likely that President Trump will appear to have won — potentially in a landslide — on election night, even if he ultimately loses when all the votes are counted.

Way more Democrats will vote by mail than Republicans, due to fears of the coronavirus, and it will take days if not weeks to tally these. This means Trump, thanks to Republicans doing almost all of their voting in person, could hold big electoral college and popular vote leads on election night.

This scenario has the potential to spark uncertainty an order of magnitude higher than the 2000 Bush-Gore hanging chad Florida electoral controversy.

President Trump is already tweeted to alert his supporters about that possibility. A closely contested election with results that are not trusted by one side could spark protests and counter-protests all over the country. The events in Portland and Kenosha are just a preview. Imagine multiplying them by 10, or 100 as armed protesters from both sides flood the streets.

This is hardly a scenario promoted by the radical fringe. Even The Economist devoted an entire issue to this subject. 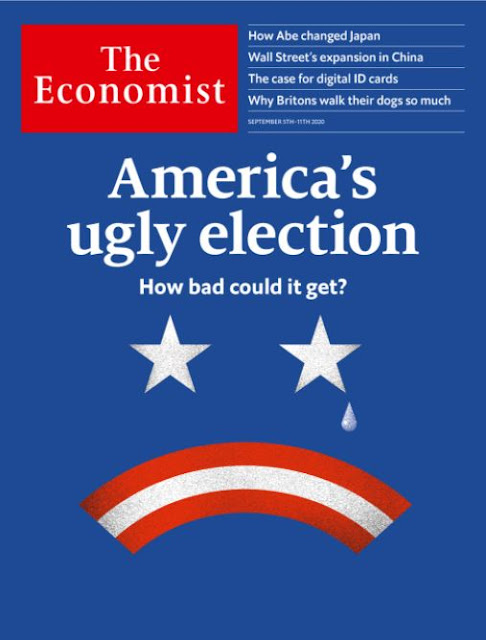 Are civil wars bullish? Is it any wonder why volatility premiums are elevated around the time of the election?

A shorter term explanation for the dual rise in stock prices and implied volatility is the gamma chase by dealers. The perennially bearish website Zero Hedge reported that Nomura’s cross-asset analyst Charlie McElligott found that there has been a very large buyer of technology stock call options, to the tune of over $1 billion in option premiums.

Over the past few weeks, there has been a massive buyer in the market of Technology upside calls and call spreads across a basket of names including ADBE, AMZN, FB, CRM, MSFT, GOOGL, and NFLX. Over $1 billion of premium was spent and upwards of $20 billion in notional through strike – this is arguably some of the largest single stock-flow we’ve seen in years. “The average daily options contracts traded in NDX stocks to rise from ~4mm/day average in April to ~5.5mm/day average in August (a 38% jump in volume).

Dealers became net short as this very large buyer came into the market. Consequently, market makers had to buy the underlying shares in order to hedge their position, which sparked a bullish stampede and NASDAQ melt-up. Zero Hedge concluded:

Putting it all together, we find that a combination of market euphoria, free options trading, and most importantly, few market-makers have sparked the fire. It also means that “a few large hedge funds understood this and have added fuel to the fire by pushing implied higher and higher and putting further pressure on the likes of Citadel and Goldman. With this process helping drive names like Apple and Tesla, this also makes sense why Breadth has been so terrible.

The Financial Times subsequently identified the large buyer as Softbank. Softbank spent roughly $4 billion in call option premiums to control $50 billion of equity assets. The purchases appears to have sparked a bullish stampede. SentimenTrader pointed out that the retail small option buyers continued to pile into their bullish bets despite the late week sell-off. 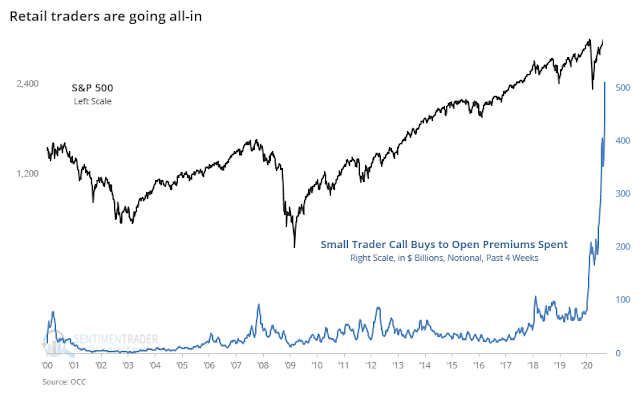 Maybe some reasons for the market swoon last Thursday was the disappearance of Softbank buying, or just buyer exhaustion.

We can observe the footprints of the call option buyers in the price action of the NASDAQ 100 (NDX) and VXN, which is the implied volatility of the NDX. VXN (top panel) had been basing and began to rise in lockstep with NDX. VXN then went on to stage an upside breakout out of its multi-month base, indicating a possible volatility storm ahead. From a technical perspective, NDX remains in a rising channel, and the relative performance of NDX is still in a relative uptrend. Until we see downside breaks in those trend lines, traders should not turn bearish. 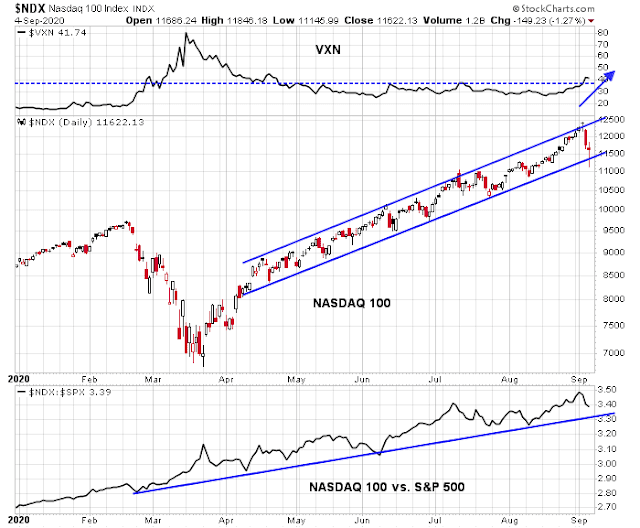 Should we see downside technical breaks, downside risk could be considerable. Analysis from JPMorgan reveals that market participants have completely unwound their equity short positions from March. Short interest is extremely low, and there is little buying support from short covering should stock prices take a tumble. 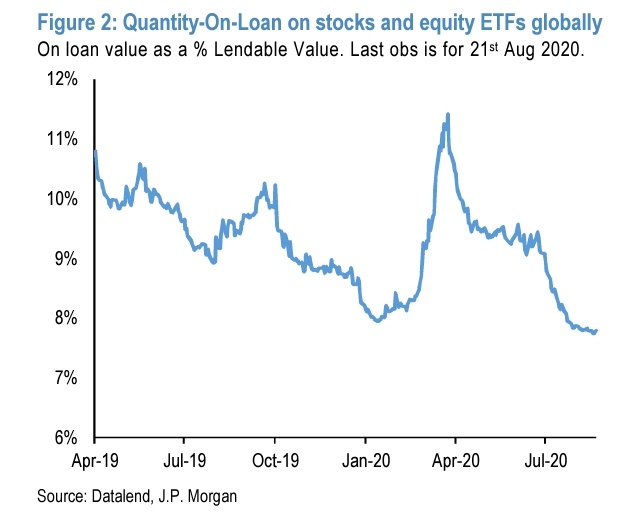 Tactically, where do we go from here? Is this just a brief pullback, or the start of a major correction? The blogger Urban Carmel observed that when the S&P 500 falls -3% or more, such downdrafts tend to occur in clusters, and the first one from a high doesn’t mark the initial low, and such strong down momentum typically followed by a lower close in the day or two. In the last year, there were two bounce and successful re-tests of the lows, and one market plunge. 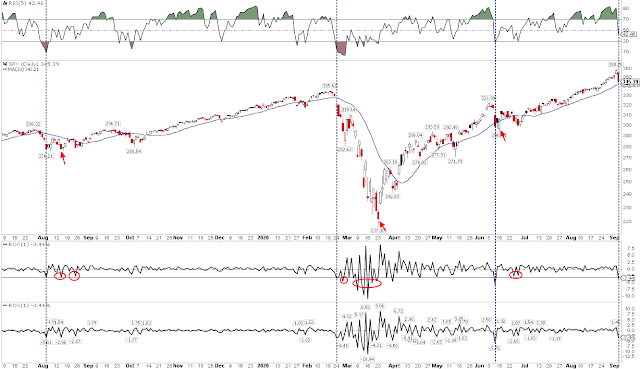 What’s the likely outcome? Market internals are deceptive. my high beta to low volatility equity risk appetite indicator is flashing a risk-on signal, but it flashed a similar signal at the bottom of the initial market plunge in March. We are likely to see some sort of short-term bounce early next week, as the market is sufficiently oversold to warrant a relief rally. I am watching the behavior of this indicator, as well as breadth metrics such as the Advance-Decline Line and Volume, for signs of either a positive or negative divergence on the re-test before declaring a bullish or bearish verdict. 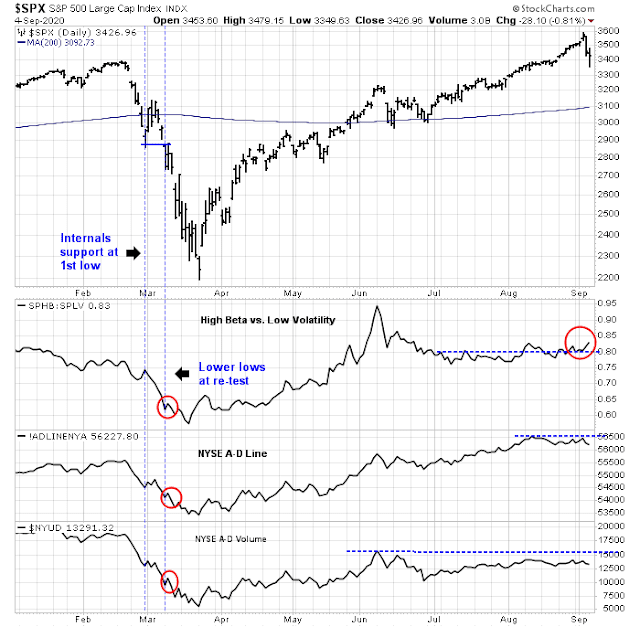 Short-term momentum presents a mixed picture. The percentage of stocks in the NASDAQ 100 above their 5 dma is oversold. As NASDAQ stocks have been the tail that wag the dog market leaders, the market is ripe for a bounce early next week. 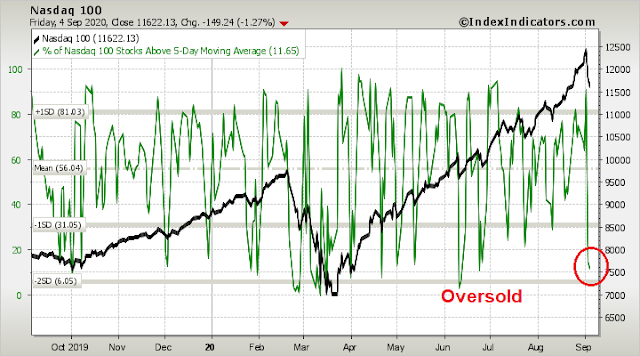 On the other hand, traders have to be aware of the possibility that this is just the start of a major downdraft. The percentage of S&P 500 stocks above their 5 dma is not oversold, and the pattern has eerie parallels to the major market decline in March. 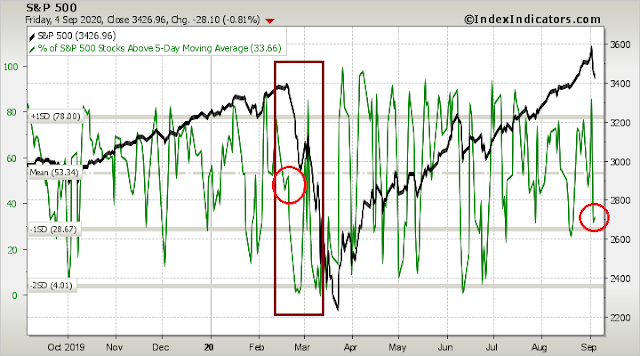 Sentiment is extremely jittery. Retail traders piled into inverse ETFs late last week. While this is contrarian bullish, it’s difficult to believe that the wild speculative frenzy of the past few weeks could be unwound in two days. Be prepared for more volatility. 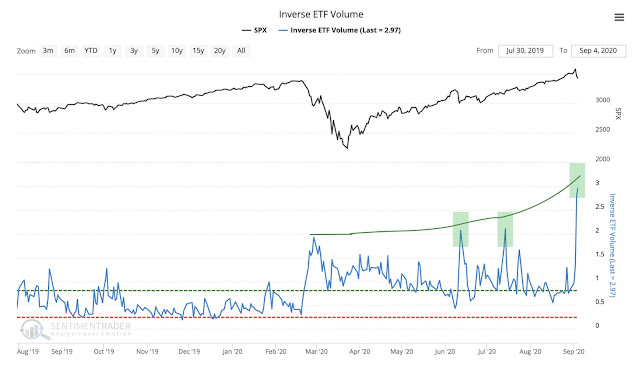 In conclusion, there are both short and medium term catalysts for a market volatility storm. Traders should expect heightened volatility and risk premium compression between now and Inauguration Day. Hopefully, any electoral chaos should be settled by then.

43 thoughts on “Brace for the volatility storm”