A major correction, or just a flesh wound? – Humble Student of the Markets 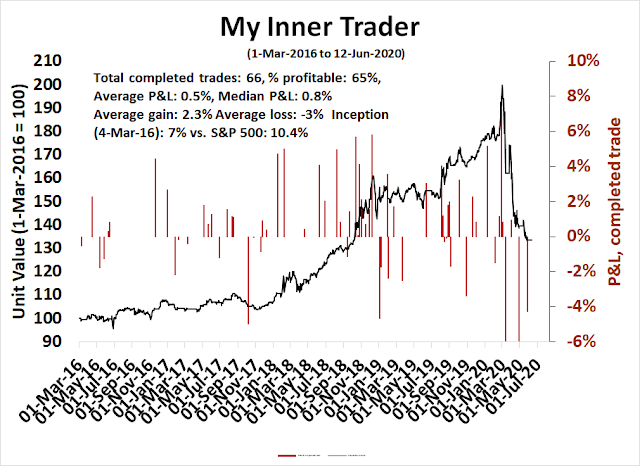 Was the market’s -5.9% one-day swoon last Thursday the start of a major correction, or just a flesh wound? 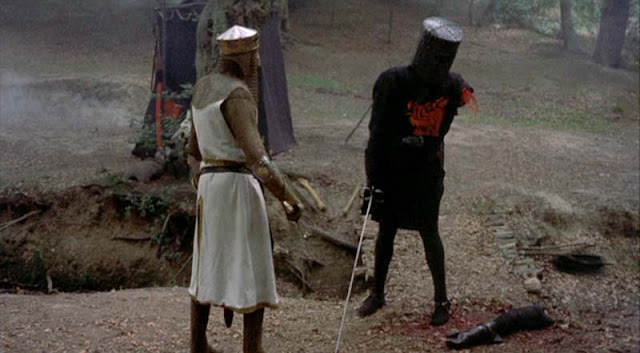 The S&P 500 exhibited an island reversal last week while violating a key rising trend line that went back to the March bottom, which are bearish. On the other hand, it successfully tested its 200 day moving average (dma), and the VIX Index (bottom panel) recycled from above its upper Bollinger Band (BB), which is an oversold reading, to below, which are constructive signs for the bull case. 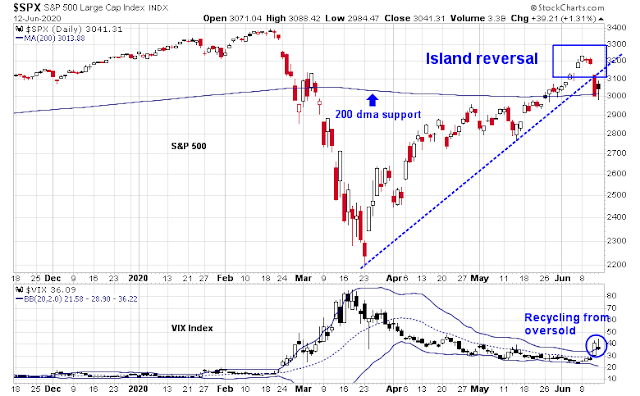 What’s next? The market had been rising steadily so long that it’s difficult to ascertain the short or intermediate term trend. The strength of an uptrend is not known until it is tested in a pullback.

Here is the bull case. Risk appetite indicators are still intact. The price relative performance of high yield, or junk, bonds and municipal bonds to their duration-equality are holding up well.

EM risk appetite, as measured by EM currencies and the relative price performance of EM bonds to their UST duration-equivalents, have been holding up well. 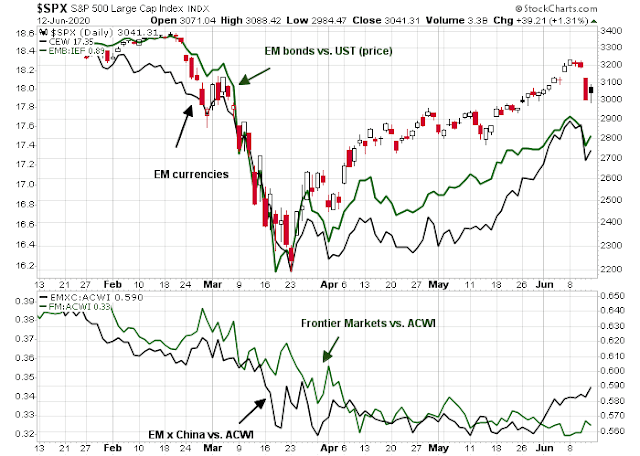 Equity risk appetite, as measured by the ratio of high beta to low volatility stocks, is still in a relative uptrend. So are the different versions of the Advance-Decline Lines. More importantly, the NYSE A-D Line made a fresh all-time high last week, which is bullish. 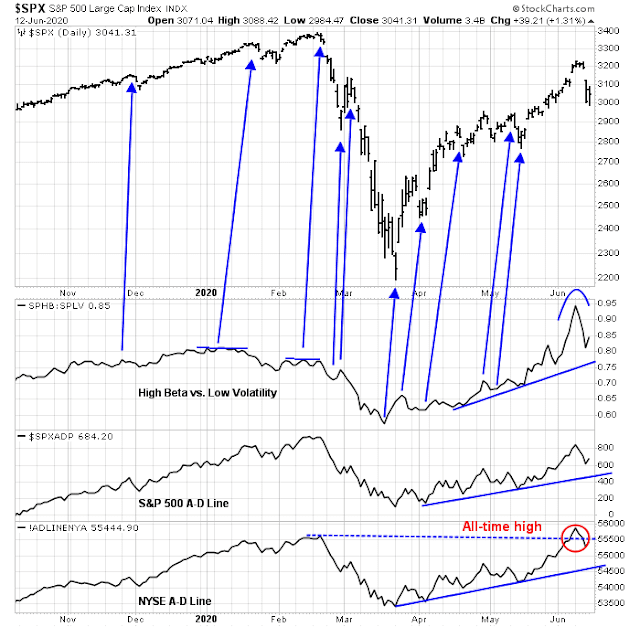 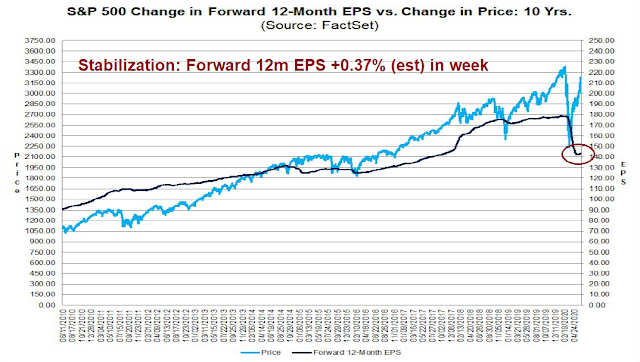 The percentage of stocks above their 50 dma recently rose above the 90% level. Such episodes have tended to be bullish in the past. Of the 10 signals seen in the last 19 years, seven have resolved bullishly, one was neutral, and two were bearish. 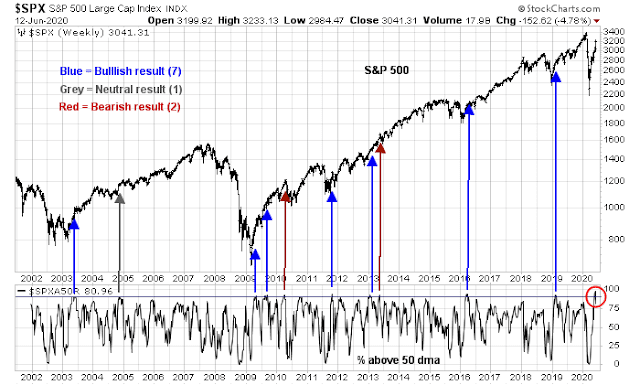 Not so fast! A dated but useful analysis from OddStats for 1923-2018 shows that, on average, the market rises 60% of the time on a one-month horizon and 63% of the time one a three-month horizon. A success rate of 70% for the percentage above 50 dma signal (n=10) is encouraging, but cannot said to be a wildly predictive.

Here are my other concerns. I have been monitoring the NYSE McClellan Summation Index (NYSI) for several weeks. In the past, whenever the NYSI has become oversold enough to fall below the -1000 level, its weekly slow stochastic had always rebounded from an oversold to an overbought reading. The stochastic has now reached its upside objective, indicating limited upside potential. Moreover, two of the last three rebound episodes were bear market rallies where the final lows of the bear markets were not in yet. 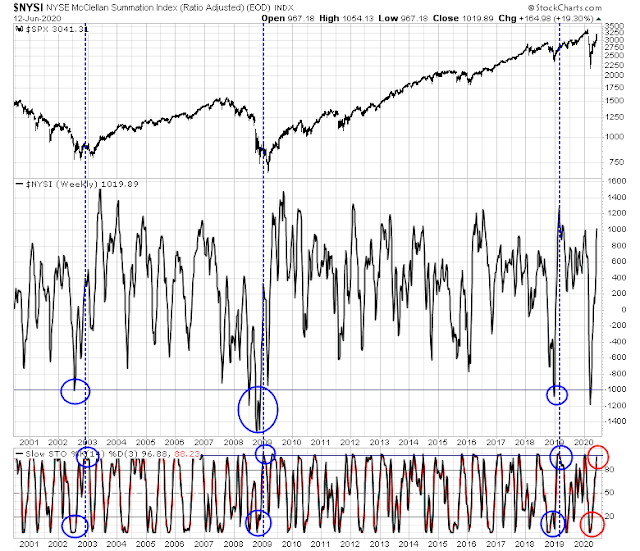 The most worrisome aspect of the intermediate term outlook is excessively bullish sentiment. Mark Hulbert attributed the market’s air pocket to a simple case of too many bulls. He pointed out that his Hulbert Stock Newsletter Sentiment Index (HSNSI) recently rose to a high of 62.5%, which was at the 91st percentile of the distribution of daily HSNSI readings since 2000. 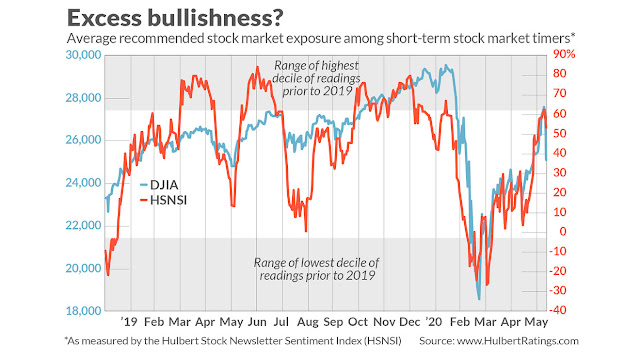 Once HSNSI starts to drop from these crowded long levels, it doesn’t stop until it becomes oversold and fear creeps in.

The typical pattern is that, once the HSNSI rises into this zone of extreme bullishness, it drops significantly. It often falls back to the 10th percentile or lower. The threshold for that zone of extreme bearishness is minus 2.7%, a reading that would indicate that the average timer is allocating 2.7% of his short-term equity trading portfolio to going short.

We’re far from that now. In the wake of Thursday’s plunge, the HSNSI dropped back just to 53.6%, which is still at the 77th percentile of the historical distribution. 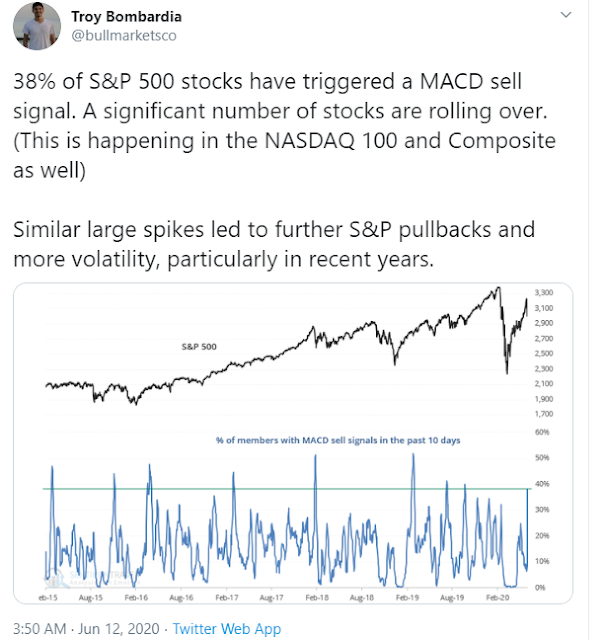 John Authers of Bloomberg offered another explanation for Thursday’s pullback, namely the perceived declining fortunes of the Republicans in November. The PredictIt odds of Trump winning the White House, and Republican control of the Senate have been falling rapidly. 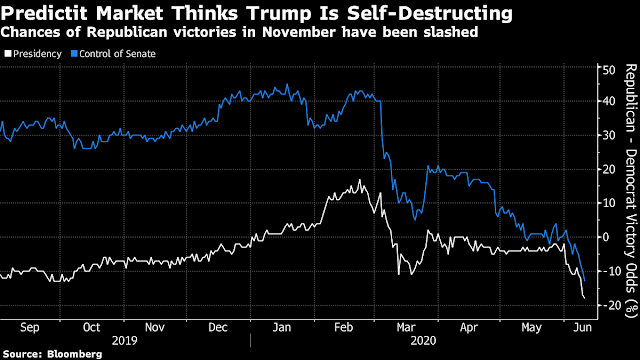 These are not market friendly outcomes for equity investors. I wrote last week (see What would a Biden Presidency look like?) that investors should pencil in about a $10 drop to S&P 500 2021 earnings from the unwinding of the 2017 corporate tax cuts. Goldman Sachs produced further analysis indicating that the secondary effects a Democrat win, such as rising minimum wages, the imposition of a minimum corporate tax, and so on, has the potential to add another $10 cut to 2021 earnings. 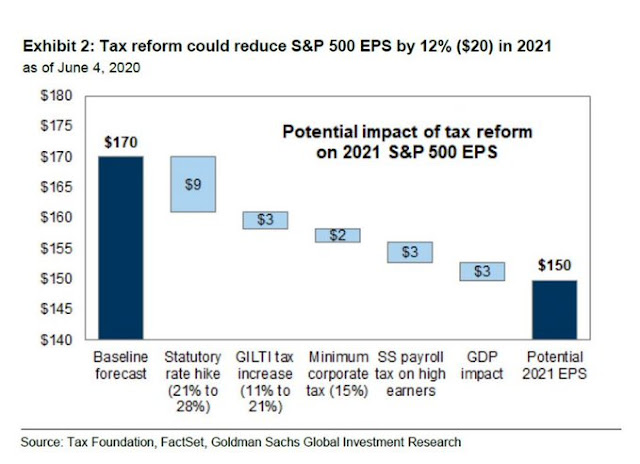 None of these developments are intermediate term equity bullish.

Where does that leave us? The weight of the evidence suggests that this is the start of a deeper correction, and not just a hiccup in an uptrend. From a trader’s perspective, however, I am inclined to give the bull case the benefit of the doubt until most of the following bearish tripwires are triggered. 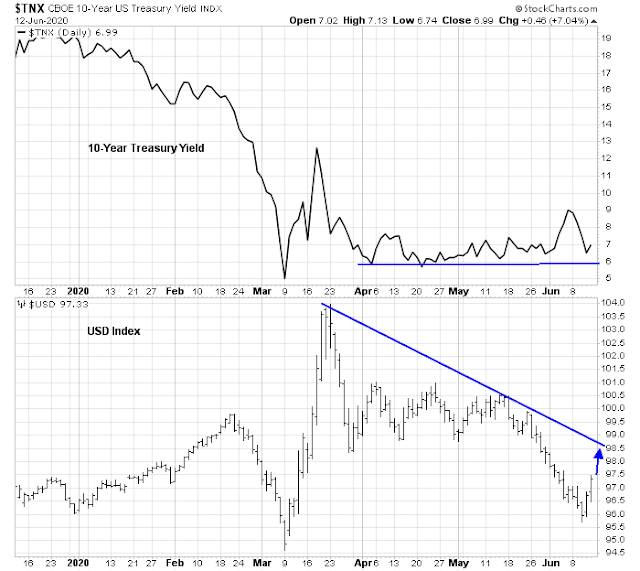 Despite Friday’s relief rally, short-term breadth is very oversold. The stock market could rally further early in the week, though there are no guarantees that an oversold market cannot become even more oversold. My inner investor is neutrally positioned, though he is leaning towards a bearish intermediate term outcome. Subscribers received an email alert on Friday indicating that my inner trader had initiated a short position in the market. While he believes that the intermediate term path of least resistance is down, he is open to all possibilities in the short run, and he is waiting for the triggers of the bearish tripwires before becoming more aggressive on the short side.

90 thoughts on “A major correction, or just a flesh wound?”