The Buttonwood column in The Economist had this to say about the recovery in metal prices (before the most recent risk-off episode):

Even as the copper/gold ratio recovers, there are reasons to be skeptical. As a reminder, this ratio is a useful indicator of global cyclicality. Both copper and gold are commodities, and respond to hard asset inflationary pressures. Copper has more industrial uses, and therefore the ratio can be a way of filtering out the hard asset inflation element out of copper prices. 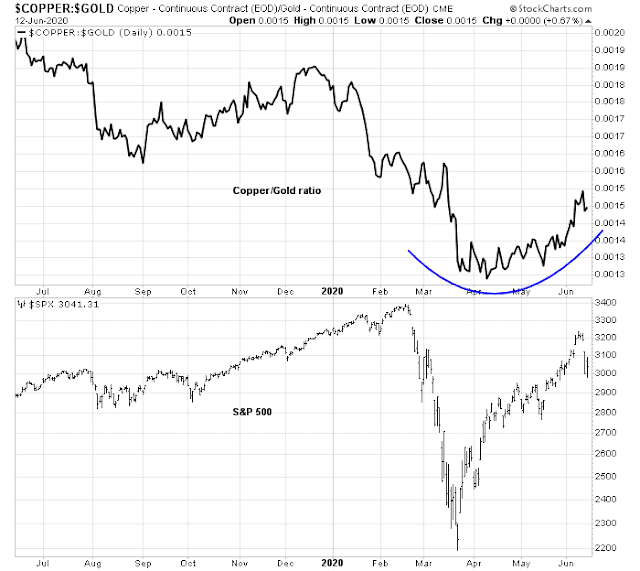 There is a speculative element to the rise in metal prices, too. Buying or selling copper futures is a popular way to express a view about the world economy. Indeed copper can be all about belief, says Max Layton of Citigroup, a bank. Many of the bets laid on it are by trading algorithms, which mechanically respond to financial signals that have worked well in the past. The dollar, which has fallen by 6% against a basket of currencies since March, is usually part of the semaphore. A weaker dollar allows for easier terms of finance in emerging markets. Anything that helps emerging-market economies is generally good for commodity prices. So the algorithms buy.

The complex of price changes becomes self-reinforcing. Higher ore prices bring higher-cost producers back to the market. But their profit margins are then squeezed as their home currency appreciates, because that raises the cost of labour in dollars, in which commodities are priced. To restore margins, prices must go up. Moreover, marginal costs rise when the prices of steel (used for mining parts) and oil (used for energy and chemicals) go up. These higher costs push up prices further, says Mr Layton.

What policy choices does China have to revive its economy?

From a long-term perspective, China has a demographic problem. Its population is aging rapidly. The engine of its growth miracle, which was initially based on the widespread availability of cheap labor, is starting to sputter.

The second problem is debt. Its debt burden has grown to gargantuan levels, and its debt to GDP ratio has plateaued at levels where other countries have experienced crises. 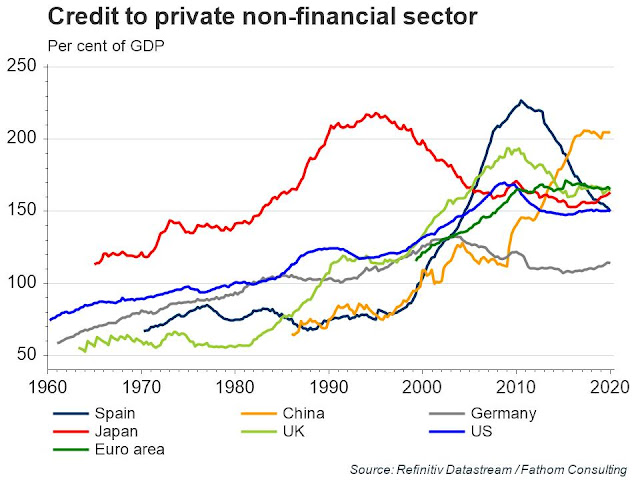 These headwinds are well known, and Beijing has worked to address these issues for some time. Then policy makers got blindsided by COVID-19, and the authorities chose to respond by putting the entire country into quarantine and shutting the economy down. Now that activity is restarting, growth has become even more unbalanced. Industrial activity has revived, but consumers continue to struggle. Just as consumer activity appeared to rebound, it fell again. 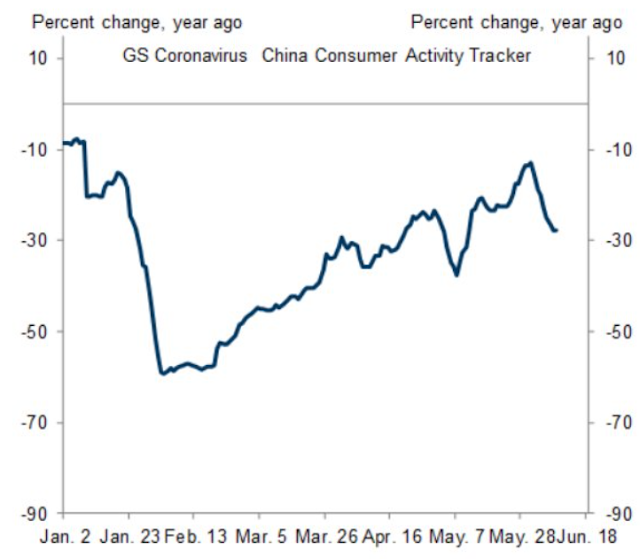 China’s policy makers chose to restart the economy by focusing on production, whose growth potential depends mainly on exports. The pandemic has spread around the world, and the ensuing shutdowns have cratered demand. If global demand is weak, China’s export led strategy has limited upside potential.

One option is to double down on the export strategy through devaluation. There are two problems with a devaluation strategy. First, it would invite capital flight, and raise doubts about the RMB as a stable reserve currency. As well, it is unclear whether devaluation confers any net growth benefits. The policy is just a subsidy for exporters at the expense of domestic producers and the Chinese household sector. It would also run counter to Beijing’s objective of rebalancing growth towards consumers.

The PBOC’s exchange rate policy recently shifted to a currency basket. Since that shift, the Yuan has been remarkably stable against its benchmark basket, which is a sign that China does not want to pursue the devaluation path. Nevertheless, the volatility of its exchange rate against the USD has increased, but that’s a USD effect, not a CNY policy effect. 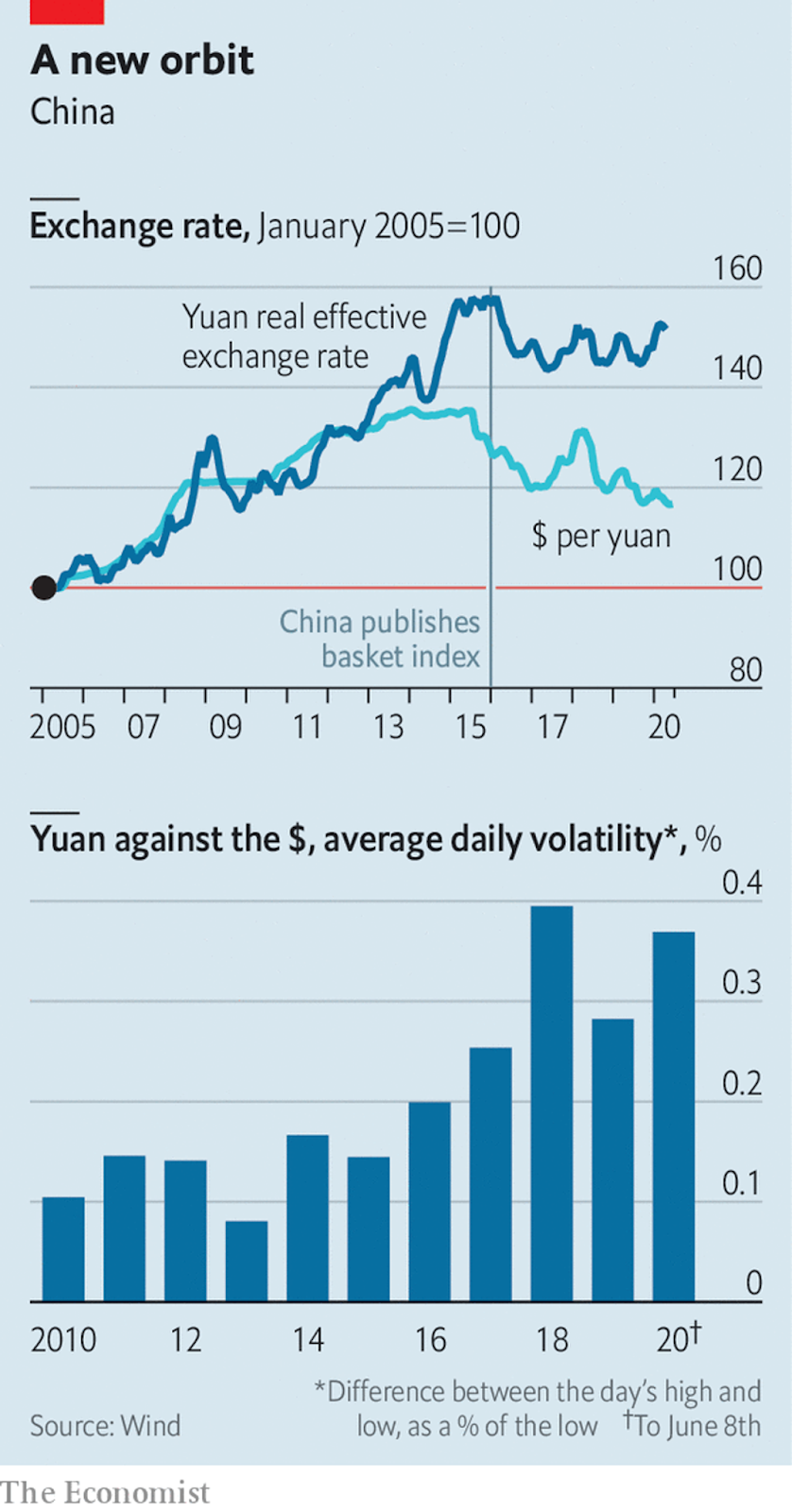 The combination of USDCNY volatility and the collapse of China’s imports from the US under the Phase One trade deal has the potential to raise trade friction with Washington.

What does a government do when its economy is sputtering and it can’t find a solution? One of the usual approaches is to adopt a nationalist approach in its foreign policy as a way of distracting from problems at home. Indeed, China has pivoted to “wolf warrior” diplomacy to defend its interest. Minxin Pei, Professor of Government at Claremont McKenna College, explains in a Project Syndicate essay:

For example, in mid-March, the foreign ministry’s newly appointed deputy spokesman, Zhao Lijian, promoted a conspiracy theory alleging that the US military brought the novel coronavirus to Wuhan, the pandemic’s first epicenter.

Similarly, in early April, the Chinese ambassador to France posted a series of anonymous articles on his embassy’s website falsely claiming that the virus’s elderly victims were being left alone to die in the country. Later that month, after Australia joined the United States in calling for an international investigation into the pandemic’s origins, the Chinese envoy in Canberra quickly threatened boycotts and sanctions.

In addition, Beijing has taken steps to assert more control over Hong Kong’s affairs, which has rankled many Western capitals. The China-India conflict is heating up. There are reports that Chinese troops have encroached on the Line of Control (LOC) between the two countries, and established positions and artillery emplacements on the Indian side of the LOC.

A Bloomberg article suggests that China actually prefers a Trump win in November despite his “tough on China” reputation as Chinese foreign policy as a signal of prioritizing geopolitical over trade objectives:

Interviews with nine current and former Chinese officials point to a shift in sentiment in favor of the sitting president, even though he has spent much of the past four years blaming Beijing for everything from U.S. trade imbalances to Covid-19. The chief reason? A belief that the benefit of the erosion of America’s postwar alliance network would outweigh any damage to China from continued trade disputes and geopolitical instability…

“If Biden is elected, I think this could be more dangerous for China, because he will work with allies to target China, whereas Trump is destroying U.S. alliances,” said Zhou Xiaoming, a former Chinese trade negotiator and former deputy representative in Geneva. Four current officials echoed that sentiment, saying many in the Chinese government believed a Trump victory could help Beijing by weakening what they saw as Washington’s greatest asset for checking China’s widening influence.

Here is the risk for the markets. It’s not just Chinese policy makers who are subject to pressures in their own country. In the US, Trump’s poll numbers have been sinking in the past few weeks. Even if you don’t believe the polls, market based indicators, such as the odds on PredictIt of a Trump win has also been falling. In addition, the stock market has been wobbly in the last few days. 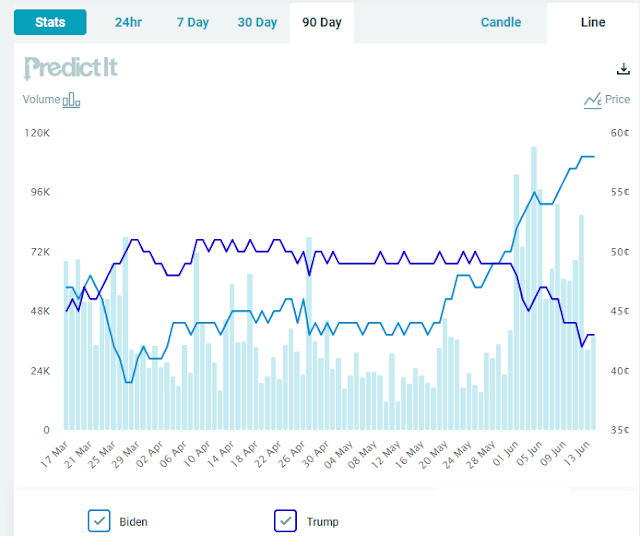 So far, Washington has largely held its fire over the failure of China’s Phase One commitments and the Hong Kong situation. In light of Trump’s deteriorating poll figures, there will be a temptation to pivot to a similar nationalist political response.

Our “trade war” factor is showing very little stress, but the potential for a spike is high. The markets will not respond well to another shock like this, especially when they are already burdened with COVID-19 related uncertainty.