The start of a new bear leg? – Humble Student of the Markets

Mid-week market update: Is this market starting a new bear leg? There are numerous signs that may be happening. The SPX violated the trend line of a rising channel while the stochastic recycled from an overbought reading, which is a sell signal. The chart of the equal weighted index, which filters out the effects of heavyweight leadership, looks worse as that index tests a key support level. 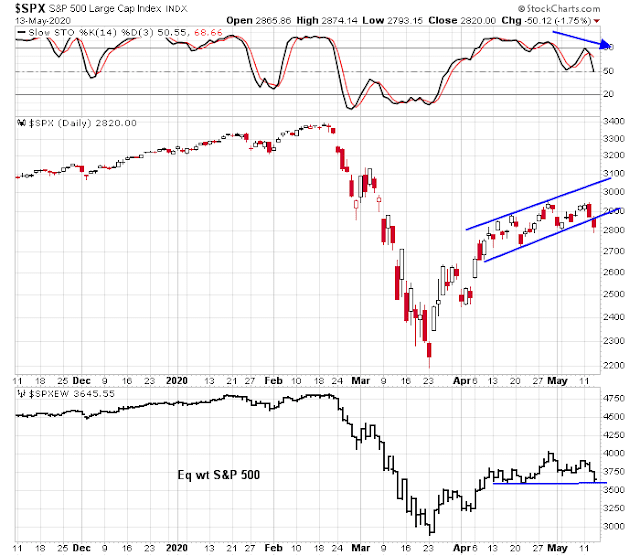 The market’s narrow leadership is evidenced by the concentration of the current leadership of technology, healthcare, and communication services, which is nearing the highs set during the Tech Bubble. 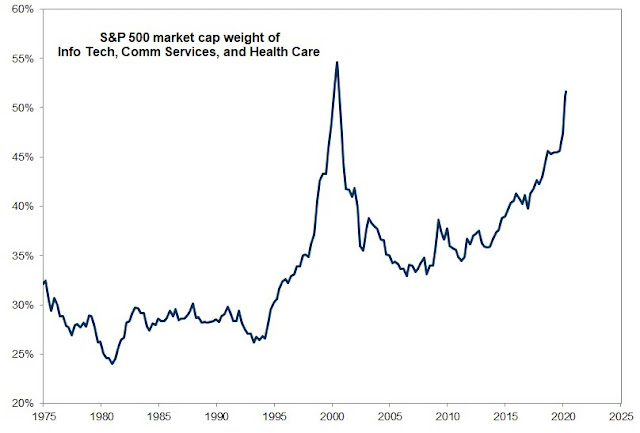 Narrow leadership and high concentration are high risk “this will not end well conditions”. Could the latest pullback be the bearish trigger?

It may be turning out that way. Sentiment signals are flashing contrarian bearish signs. About a month ago, I had highlighted the surprising results of New York Fed’s consumer expectations (see The 4 reasons why the market hasn’t seen its final low). The latest update of the monthly survey shows that expectations of higher stock prices 12 months from now surged even higher. 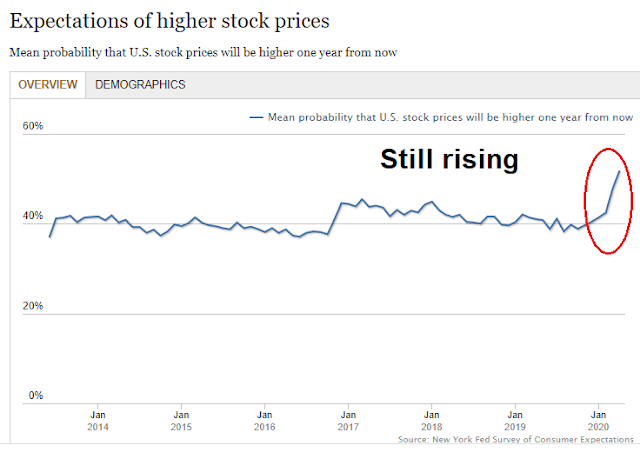 These results make me speechless.

I had also discussed the apparent anomalous AAII sentiment survey crowded short reading on the weekend (see Setting up to climb a wall of worry?). I suggested that new low-information traders and investors had rushed into the market. The market’s advance could be partly explained by their stampede into FANG+ and small speculative names. Indeed, CNBC reported that online brokerage firms had seen a surge in new investor accounts in Q1. 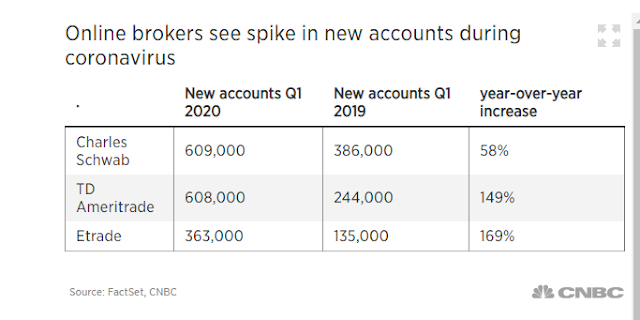 In light of the entrance of new traders, a unusual bifurcation has appeared in the option market. The equity-only put/call ratio, which tends to be the main playground of retail traders, has diverged from the index put/call ratio, which is more used by professional traders and hedgers. In the past, significant gaps between these ratios have been either decent buy signals (in yellow), or high risk signals where the market advance either stalled or fell (in grey). Readings are now at or near a sell signal. 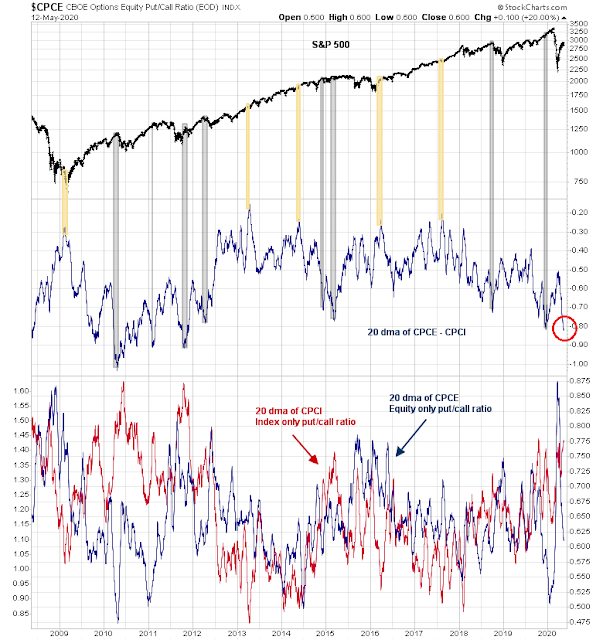 There are also other warnings about the market. Hedge fund manager Stan Druckenmiller recent warned that the risk-reward calculation for equities is the worst he’s seen in his career, and “I pray I’m wrong on this, but I just think that the V-out [recovery] is a fantasy”.

CNBC reported that Appaloosa Management founder David Tepper said that this is the second most overvalued market he has ever seen, behind 1999. He went on to question the upside potential of the popular FANG+ stocks.

Tepper also called some of the popular tech names including Amazon “fully valued.” Amazon has been one of the first companies to roar back to a new record after the coronavirus sell-off. The e-commerce giant is up 27% this year as investors bet on its resilient business.

“Just because Amazon is perfectly positioned doesn’t mean it’s not fully valued,” he said. “Google or Facebook … they are advertising companies. …They are not rich but they may be fully valued.”

Macro Charts observed that the market has become extremely overbought. Overbought conditions without a breadth thrust (Zweig, Whaley, etc.) tend to be bearish for stock prices. 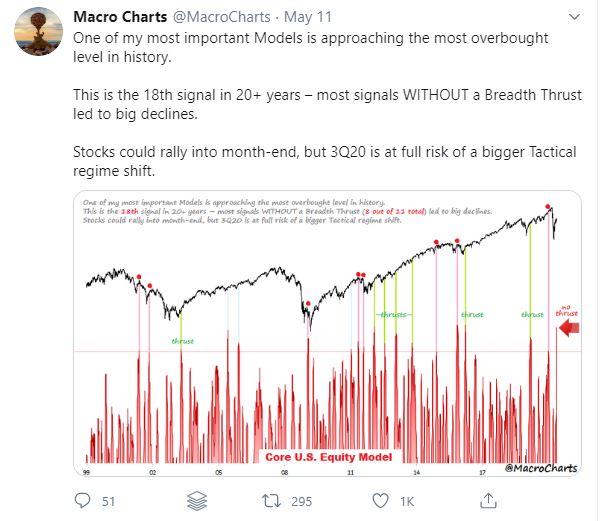 Before everyone gets overly excited about a new bear leg, we have to think about the possibility that the bulls losing control of the tape doesn’t necessarily mean that the bears are in the driver’s seat. Two days of market weakness are not definitive signs of a bearish break. We have to consider a scenario of choppy sideways consolidation for a number of reasons.

First, the advance from the March lows was led by FANG+ and momentum stocks. Different measures of the price momentum factor shows that momentum is still alive. 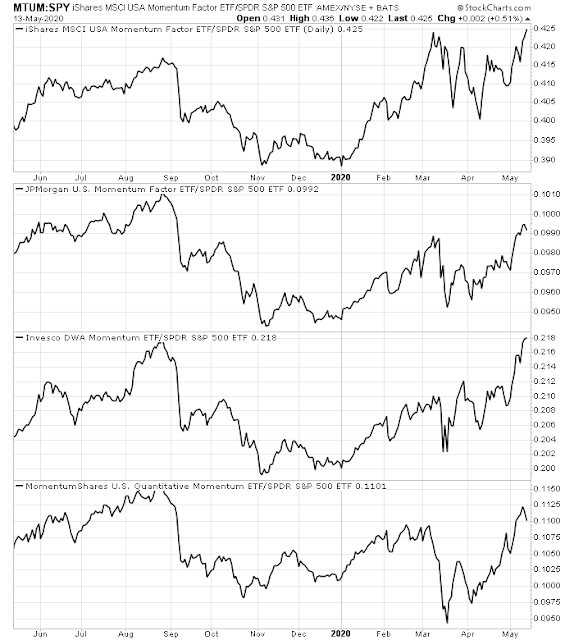 Short-term breadth had reached a near oversold condition yesterday (Tuesday), and today’s decline pushed readings further into oversold territory. The market is setting up for a near-term bounce, and the last hour rally today is supportive of that thesis. 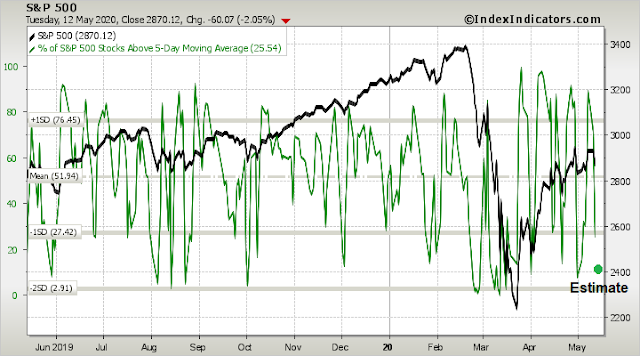 I pointed out that the equal-weighted SPX was testing a key support level. Market declines often pauses at the initial test of support. My inner trader is keeping an open mind about whether this is the start of a new bear leg, or the beginning of a period of choppy sideways consolidation.

Subscribers received an alert today (Wednesday) that I had taken partial profits in my short positions in anticipation of a relief rally into Thursday and possibly Friday. If that scenario unfolds as anticipated, my inner trader expects to add to his shorts.