Don’t forget about the recession – Humble Student of the Markets

Mid-week market update: Back on March 9, 2020, which seems like a lifetime ago, I declared a recession (see OK, I’m calling it). The call was based on the combination of a coronavirus epidemic in China that disrupted supply chains that began to spread to other countries, and tanking oil prices due to a Saudi-Russia price war. Since then, stock prices cratered, and recovered to stage a strong rally on the back of fiscal and monetary stimulus.

During this rally, what the market seems to have forgotten about is the recession, which has historically been bull market killers. Moreover, recessionary bear markets take a considerable amount of time to resolve themselves. 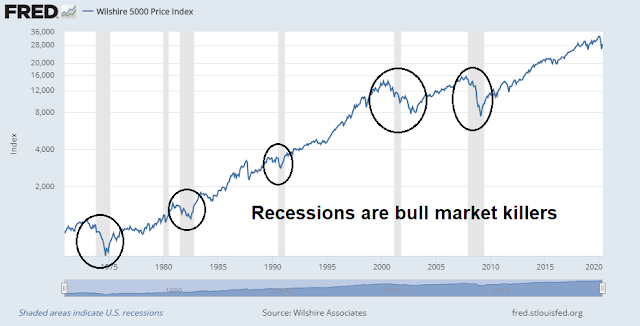 In the short run, a number of worrisome divergences and risks have begun to appear during the course of the latest stock market rally.

Can the market ignore $20 oil?

The first divergence is stock and oil prices. Despite the news of a massive OPEC+ deal to cut output by 9.7 million barrels per day, oil prices continue to be weak. Remember, falling oil prices in 2015 led to a mild industrial recession.

As well, CNBC reported that skidding demand from the COVID-19 pandemic has erased 10 years of oil demand growth.

The International Energy Agency (IEA) said Wednesday that it expects the coronavirus crisis to erase almost a decade of oil demand growth in 2020, with countries around the world effectively having to shut down in response to the pandemic.

A public health crisis has prompted governments to impose draconian measures on the lives of billions of people. It has created an unprecedented demand shock in energy markets, with mobility brought close to a standstill.

The price war didn’t help matters, but the truce concluded to cut production may not be enough as demand is still far short of supply. The WSJ reported that oil producers is running out of storage, which is creating the unusual problem of negative prices in some grades.

While U.S. crude futures have shed half of their value this year, prices for actual barrels of oil in some places have fallen even further. Storage around the globe is rapidly filling and, in areas where crude is hard to transport, producers could soon be forced to pay consumers to take it off their hands—effectively pushing prices below zero.

Can the stock market ignore $20 oil? Is this a negative divergence that investors should worry about?

The work from home illusion

As many of us hunker down and work at home, the shares of Amazon and Netflix reached fresh highs as investors piled into these stocks as a work from home (WFH) refuge. Indeed, the NASDAQ 100 and FANG stocks have maintained their leadership during the latest period of market turmoil. 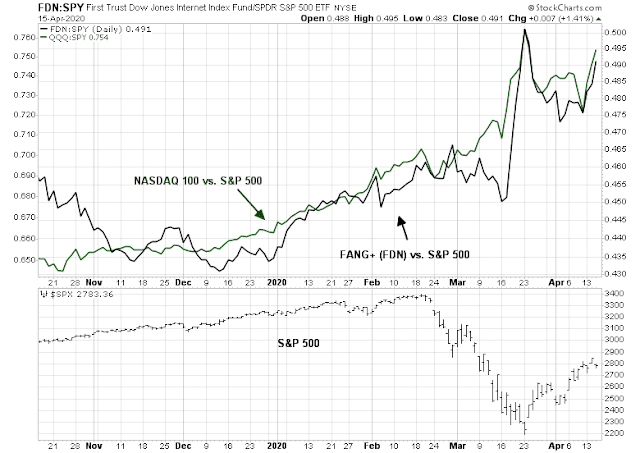 However, there are troublesome signs that this narrow leadership has become increasingly unhealthy for the stock market. The market concentration of the top five names (MSFT, AAPL, AMZN, GOOG/GOOGL, FB) is now higher than it was at the height of the NASDAQ Bubble. 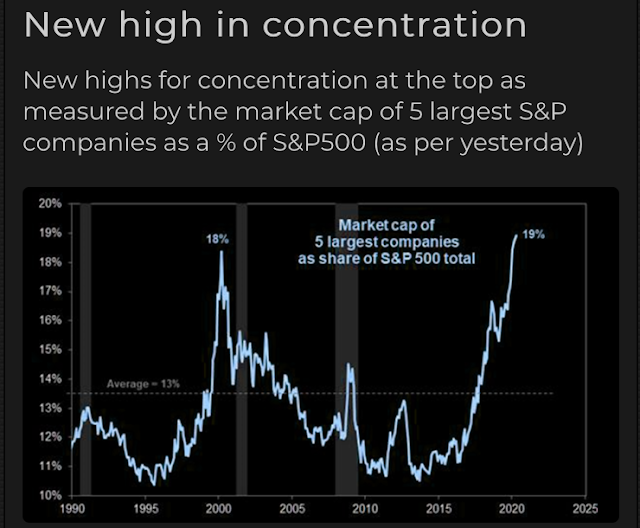 As John Authers of Bloomberg recently warned that an over-reliance on past winners is not necessarily a winning investment strategy:

Generally, buying the largest stock in the S&P 500 over history has been a bad idea. Such stocks have nowhere to go but down. Just in the last 30 years, General Electric Co. and International Business Machines Corp. both spent a lot of time at number one, as more briefly did Coca-Cola Co. and Cisco Systems Inc. In the case of FAMAG, buying the leading juggernauts, holding them, and waiting for them to extend their lead over everyone else has been the right strategy for at least half a decade.

When you buy a stock you are buying a share of its future profits, not its past. Are these companies really going to stay this dominant into the future? A market this narrow suggests that some bad news, or reason to shake confidence in one or more of the FAMAG stocks, could shock the whole market. While confidence in them remains this strong, though, the main index is unlikely to go back to its lows of March.

There are signs that the beneficiaries of the WFH investment theme could be about to break. The WFH trend is mainly a middle class and affluent white collar trend, but these jobs are not immune from the downturn. The WSJ reported that jobs that were previously thought to be safe are now the subject of a second round of layoffs:

That’s not how it’s turning out.

A second wave of job loss is hitting those who thought they were safe. Businesses that set up employees to work from home are laying them off as sales plummet. Corporate lawyers are seeing jobs dry up. Government workers are being furloughed as state and city budgets are squeezed. And health-care workers not involved in fighting the pandemic are suffering.

The longer shutdowns continue, the bigger this second wave could become, risking a repeat of the deep and prolonged labor downturn that accompanied the 2007-09 recession.

The adage that it’s a recession when your neighbor loses his job but a depression when you lose your job is starting to dawn on a lot of people. A Ziprecruiter survey indicates that the slowdown is also hitting white collar jobs, such as professional and business services, finance, and IT. 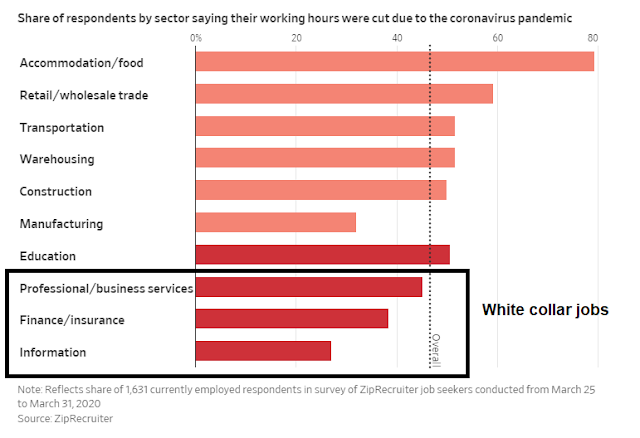 The slowdown is affecting even previously “safe” professions like law:

Law firms have had to reduce staff and cut pay as courts are largely closed, settlement discussions are on pause and few new deals are being struck.

New York City-based Cadwalader, Wickersham & Taft LLP, a 400-attorney firm specializing in financial services, has reduced associate salaries by 25% and partners are not currently receiving compensation. Firms typically lay off attorneys only as a last resort, but another New York-based firm, Pryor Cashman LLP, is furloughing some associates. A spokesman said it expects to recall them soon.

Baker Donelson, a 700-lawyer firm with some 20 offices in the Southeast and mid-Atlantic region, has reduced compensation for associates and staff by 20%. Timothy Lupinacci, the firm’s chairman and chief executive, said some clients have asked the firm to stop work or defer payments. “Law firms are not going to be top of the priority,” he said.

How we work from home isn’t the problem, said Karen Richardson, executive director at the National Association of Women Lawyers. “It’s: Will there be work for us to do?”

This second wave of layoffs will undoubtedly reduce the demand for WFH services from providers such as AMZN and NFLX. Moreover, March retail sales printed a downside surprise of -8.7% this morning, indicating a weakening economy.

When this all break the stranglehold of the FANG+ names? Watch carefully, and stay tuned.

From a tactical perspective, SentimenTrader observed that their Optimism Index (Optix) had spiked to an excessively bullish short-term optimism level. Such readings have usually resolved themselves bearishly over a one-week horizon in the past. 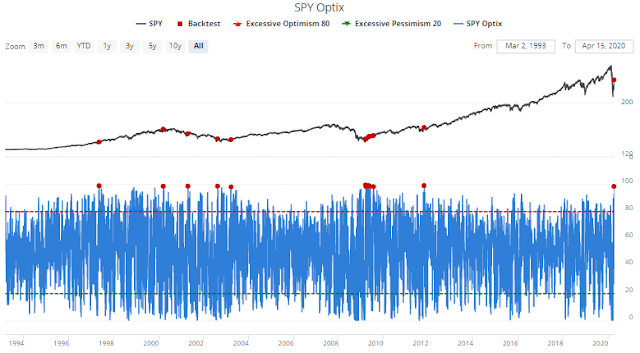 In addition, my short-term indicator of High Beta to Low Volatility stocks is turning down, indicating a loss of equity risk appetite. 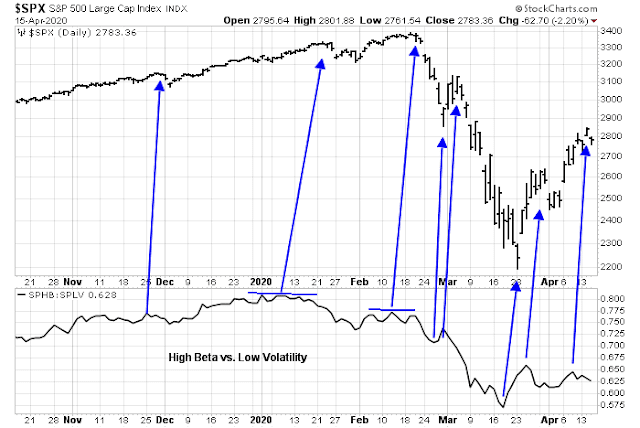 The combination of last Monday’s failure to flash a Whaley Breadth Thrust buy signal (see Fun with analogs and breadth thrusts) and this week’s market action are indicative of bullish exhaustion. In the short run, the path of least resistance is down.

89 thoughts on “Don’t forget about the recession”