Fun with analogs and breadth thrusts – Humble Student of the Markets

There was an amusing joke tweet that circulated, which overlaid the 2020 market experience over the 2008 bear market and projected a downside target of 125 for SPY. If anyone saw that, it was a joke and not intended to be serious analysis. 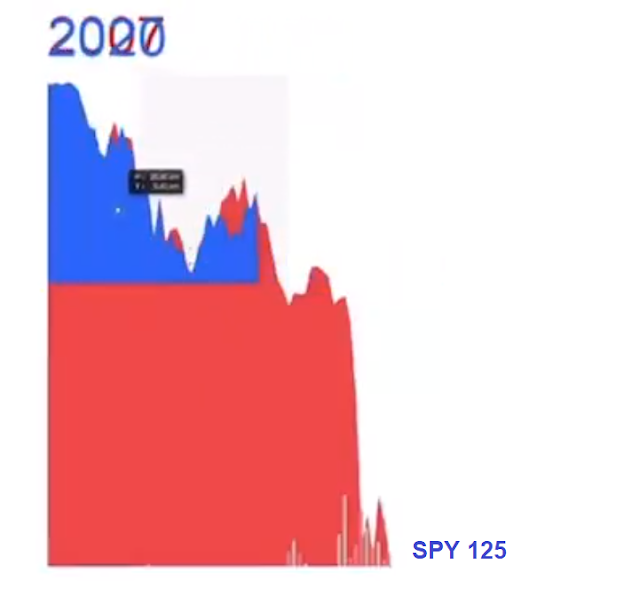 Nevertheless, analogs can be useful in analyzing markets, but with a caveat. As the adage goes, history doesn’t repeat itself, but rhymes. Traders who use analogs often expect the market to follow every single squiggle of the historical analog, which is unrealistic.

Historical analogs can be useful as a template for market action. The 2008 market pattern suggests that after an initial shock, the market rebounds and trades sideways for some time before falling to a final low. As a reminder, I made a bear case in my recent publication (see Why the market hasn’t seen its final lows) that stock prices are vulnerable to further downside risk based on a review of long-term market psychology, technical analysis of the cycle, challenging valuations, and the behavior of smart investors.  The downside potential for stock prices is considerably lower than what they are today. 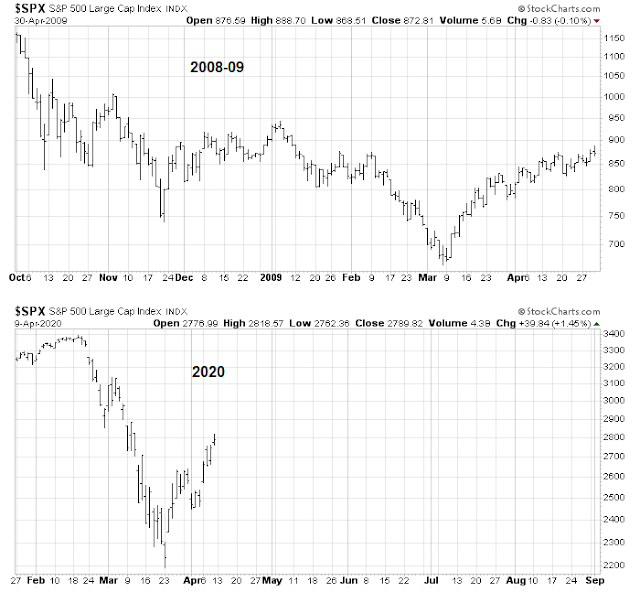 Similarly, the 9/11 exogenous shock is also a useful template for thinking about market behavior. The economy was already in recession in 2001, but the market did not bottom until a year later in 2002. Things are different today, the economy was humming along and poised for a solid but unspectacular 2020 when it was hit by the dual broadsides of the COVID-19 pandemic and an oil price war. Stock prices skidded after the 9/11 attack, recovered to trade sideways until it fell into the final lows in late 2002. 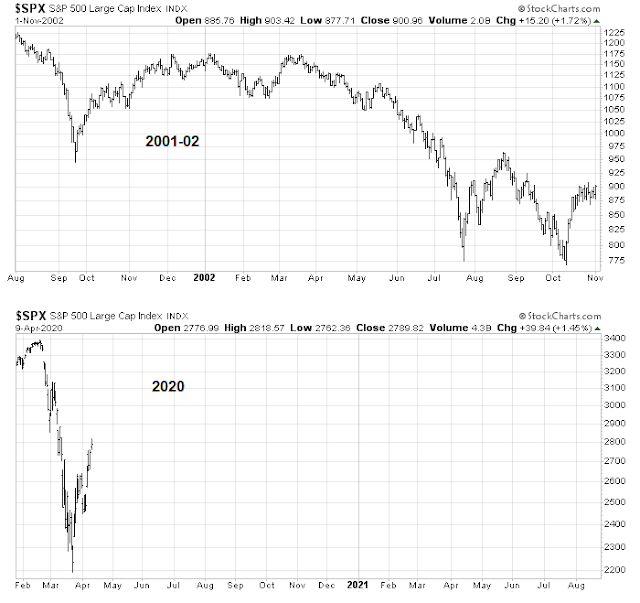 After an initial bottom:

Every market is different, and your mileage will vary. The lessons from these bear markets indicate a period of choppy range-bound price action. No one has a crystal ball that can tell you whether the advance will halt at the 50% retracement level, or if it will continue.

As an update to yesterday’s post (see A Dash for Trash countertrend rally), one reader pointed out that my analysis of the Whaley Breadth Thrust (WBT) had referred to the wrong table from Wayne Whaley’s publication. The history of WBTs was on table 2, not table 5. 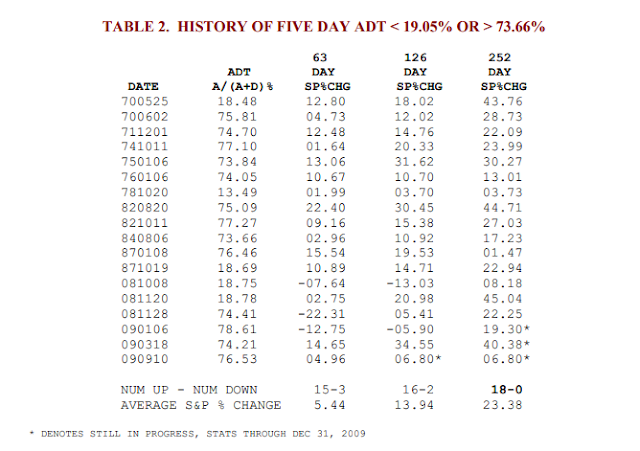 Here is a revised analysis of the key differences between the WBT and my preferred signal, the Zweig Breadth Thrust (ZBT) in 2009. There were three WBT signals and one ZBT signal during this period. As the ZBT Indicator (bottom panel) shows, WBT signals only require strong momentum that moves the ZBT Indicator into overbought territory, while the ZBT signal requires the combination of an oversold condition and strong momentum in a short period. During this period, the first WBT signal failed, the second WBT coincided with the ZBT signal, and the third, while successful, was not as strong as the ZBT signal. 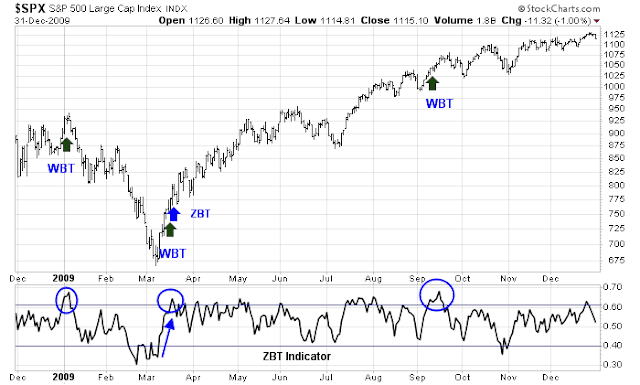 Here is the ZBT Indicator today, which has moved into overbought territory but not within the 10 day window required for a buy signal. By contrast, the WBT model is on the verge of a buy signal. 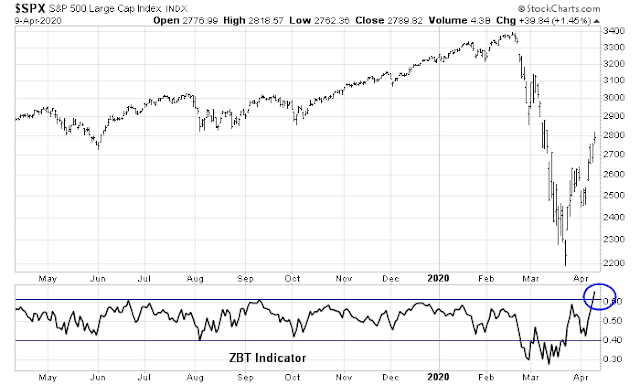 Of the three WBT during 2009, one coincided with the ZBT signal and worked well. Of the other two, one failed, and one worked, though subsequent momentum was not extremely strong. We can conclude that the WBT model is less rigorous than the ZBT model, and therefore more prone to failure and more false positives. 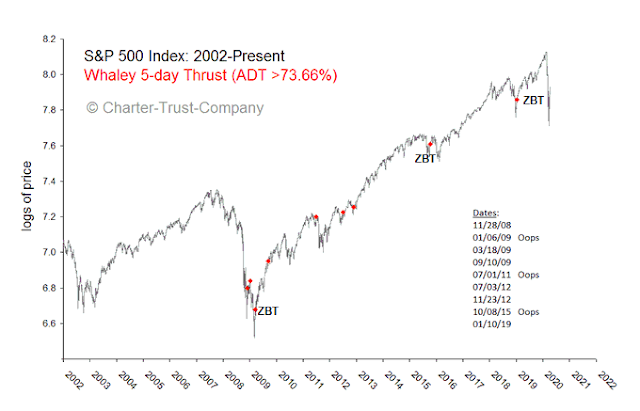 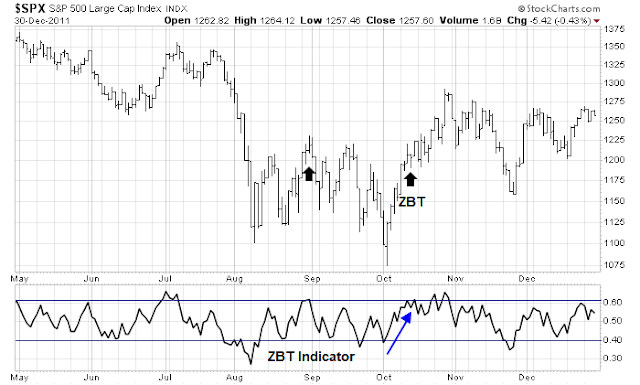 Steenberger went on to tentatively conclude that these signals tend to be better long-term investment buy signals than trading signals.

My main takeaway is, if you are going to trade on breadth thrusts, trust the real thing and only buy ZBT signals. The ZBT model has a more restrictive criteria which raises their short-term success rate. By contrast, other strong momentum breadth signals tend to be more hit and miss affairs, even in the current environment where the VIX Index is highly elevated.

51 thoughts on “Fun with analogs and breadth thrusts”