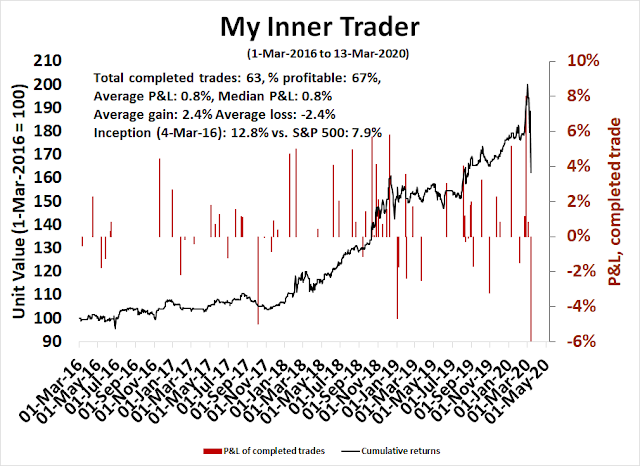 Is this the long await bounce for the stock market? The SPX traced out a strong bullish reaction to Thursday’s ugly action while exhibiting positive RSI divergence. If this is the long awaited bounce, the most logical resistance level is the 50% retracement, which is also the site of the 200 day moving average. 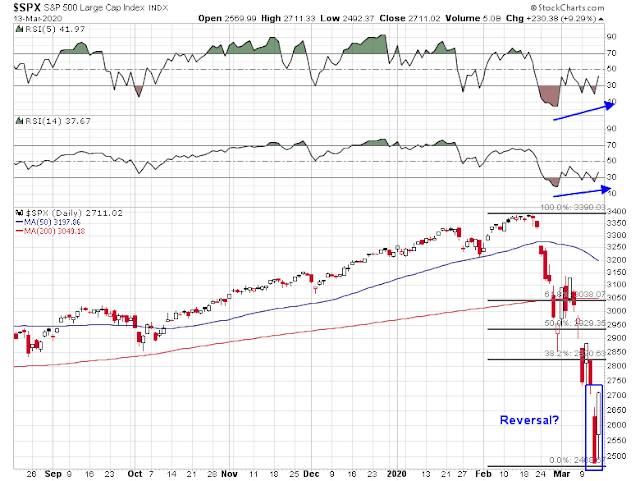 This retreat into bear market territory, as defined by a -20% decline, was the fastest in market history, even compared to the Crashes of 1987 and 1929. Bear in mind that if this was the capitulation low, the market bounced at the initial low in 1929, and in 1987. Each had very different results. Both were market crashes, one went on to mark the start of the Great Depression, the other was just a blip in a continuing economic expansion. 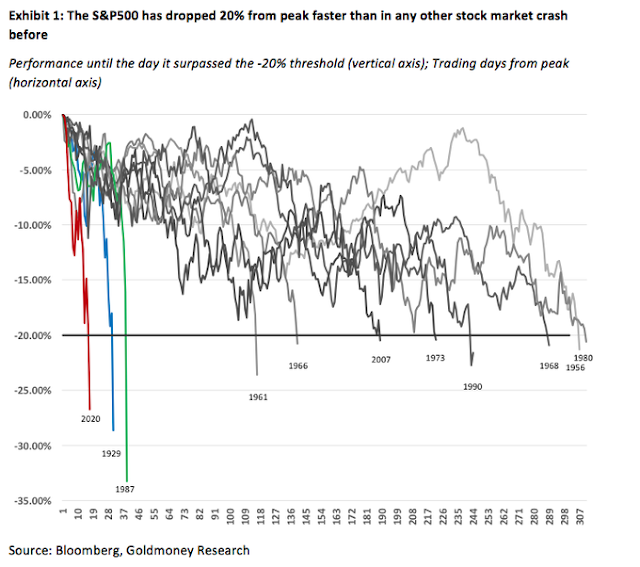 A review of market history

A tour of market history of past market bottoms and crashes is in order. Let’s start with some past market crashes.

The market reaction to the crash of 1929 was a relief rally. The Dow pulled back after the initial bounce, but the old 1929 low was not tested and broken until over a year later. The rest, as they say, is history. 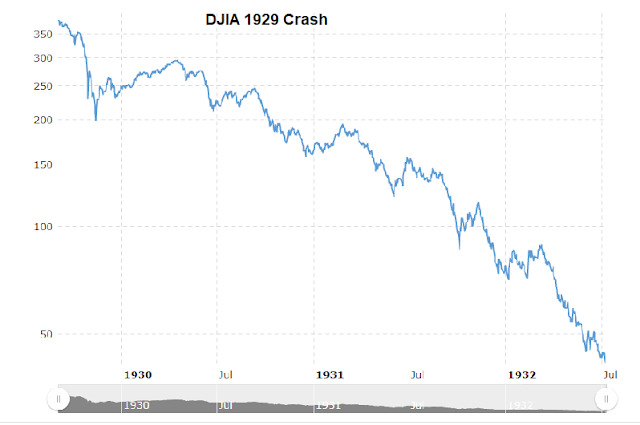 The crash of 1987 saw the market bounce, followed by a re-test within a few weeks. The market continued to advance after that event as the market crash did not spark a recession. 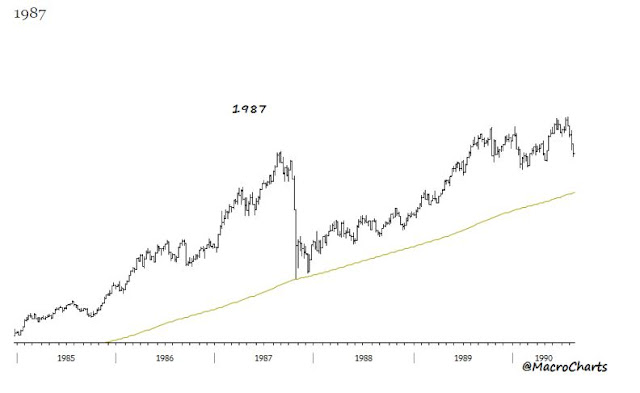 The shocking events of 9/11 was a special case. The economy was already in recession. The market bounced after 9/11, but it weakened after the bounce and made a new low in 2002. The 2002 bottom was a classic bounce-and-retest bottom. 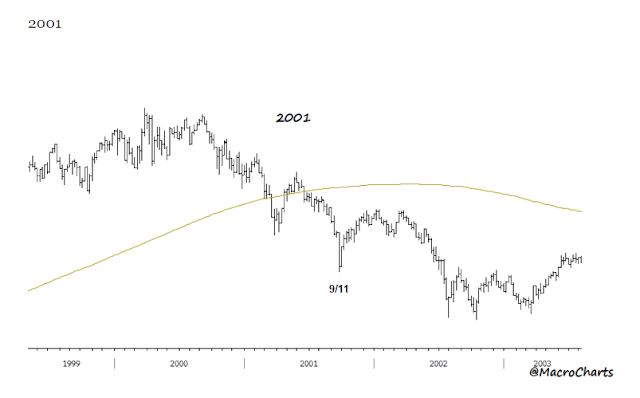 Here are some other examples of market bottoms that occurred in recessions. The ugly 1974 bear market was another bounce and retest bottom. 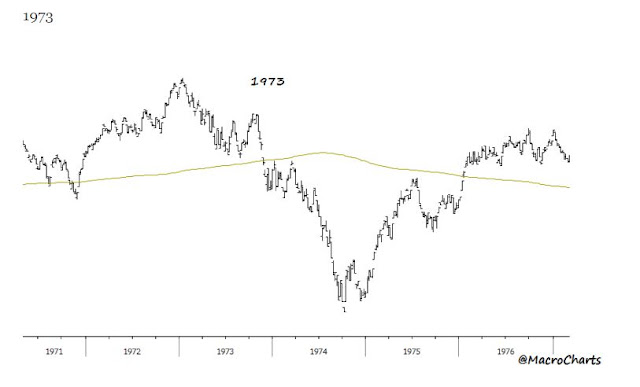 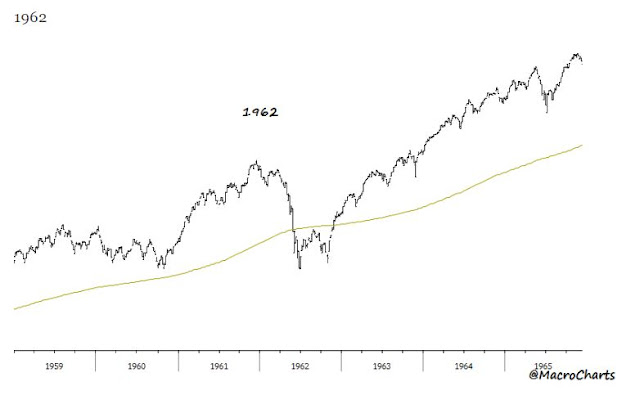 The bottom in 1982 is best described as a complex W-shaped choppy low. 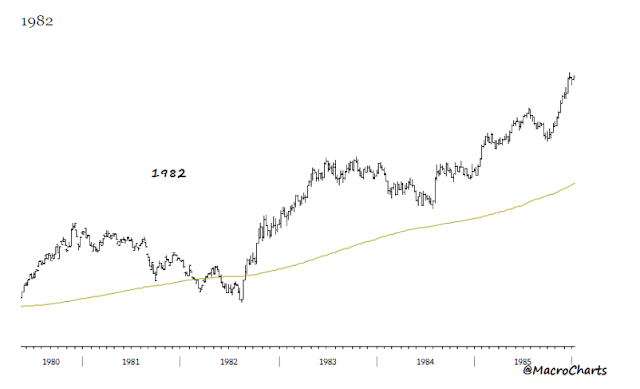 The recession low of 1990 was also a complex W-shaped bottom. 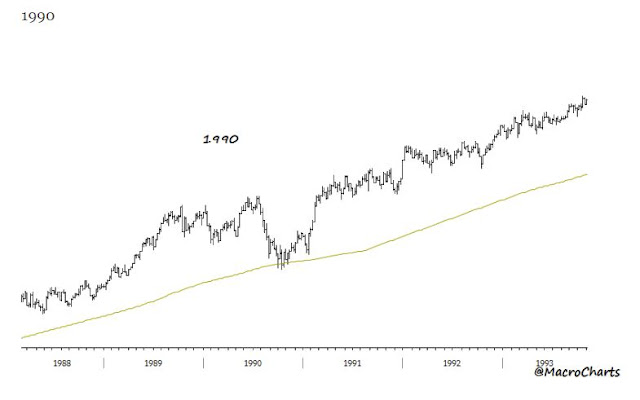 Here are the lessons of this stock market history review. After an initial bottom:

Sentiment cycle supportive of a bottom

Where do you think we are in the sentiment cycle? 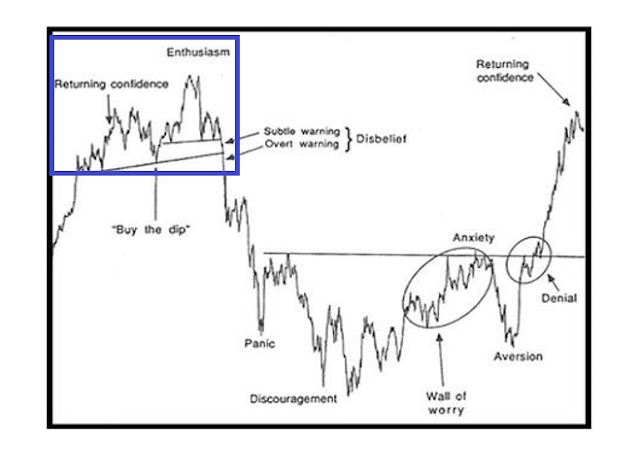 My personal assessment is we hit unbridled panic last week, based on the comments on my social media feed. Consider how the tone of Barron’s covers have changed in a few short weeks, as a classic example of the contrarian magazine cover sentiment indicator. A few weeks ago, Barron’s was constructive in the face of the market weakness. 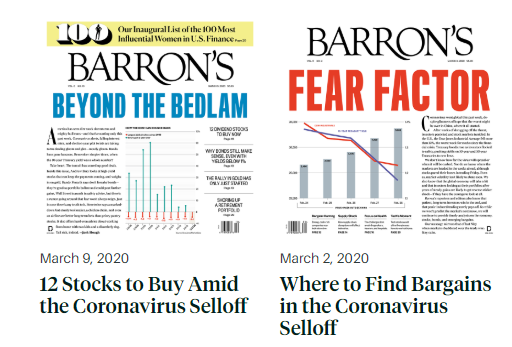 This week, they are *ahem* less constructive on the markets. 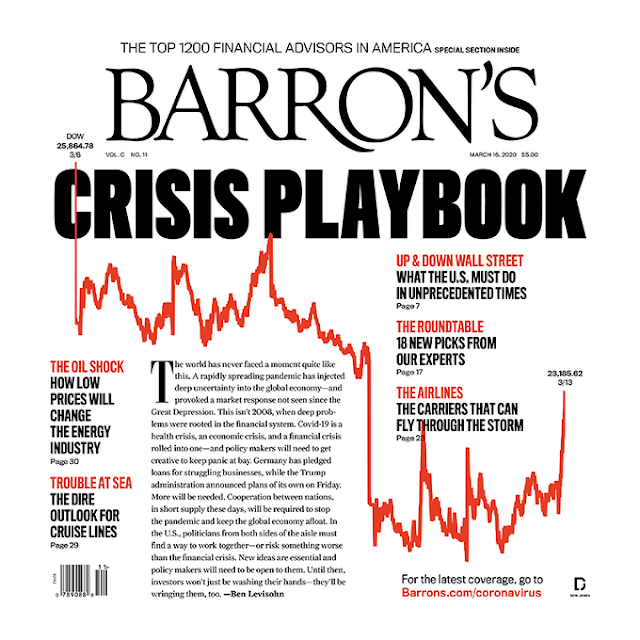 We will see confirmation early next week whether last Thursday represented the first low of this sell-off.

We saw the initial low in the market last week, was it the bottom, or a level at which investors can start buying?

Here is the bull case. FactSet reported that the market’s forward P/E ratio fell to 14.0, which is below the 5-year average of 16.7, and 10-year average of 15.0. A 14x multiple is close to the multiple achieved at the Christmas Eve bottom of 2018. 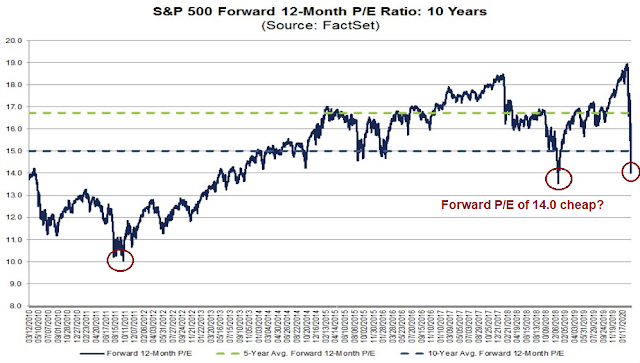 The market is starting to look cheap, and insiders are buying. What are you waiting for?

Not so fast, say the bears. This was the fastest market decline in history. Past market bottoms were characterized by slower and gradual weakness. The estimated E had no chance to catch up with the rapid deterioration of the P of the P/E ratio. Forward 12-month EPS had been mostly flat since late 2019, and they have only begun to fall. The weakness in forward EPS is nowhere nearly as negative as the experience of 2014-15 when the economy experienced a shallow industrial recession. 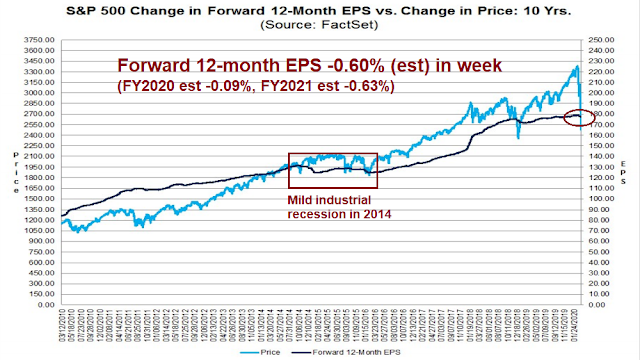 A more detailed analysis of sales estimates tells the story. The softness in estimates is concentrated in the cyclical part of the market, industrials, energy and materials, which is reflective of the weakness emanating from China and oil price war. Consumer discretionary sales downgrades are only in line with the market. The discretionary stocks are likely to be most affected by the demand shock that hits the economy as the COVID-19 epidemic spreads in the US. In short, EPS downgrades have a lot further to go because they have not fully reflective of the damage from the coronavirus epidemic. 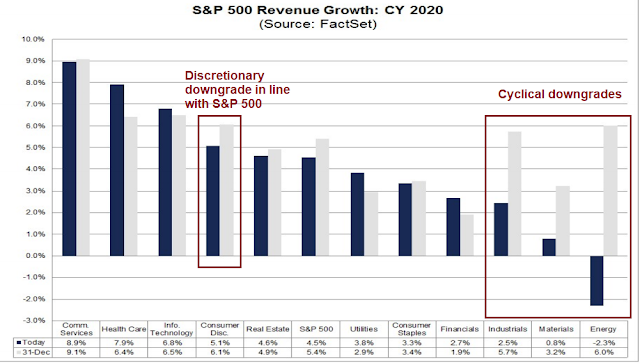 While the signs of insider buying can be viewed as constructive, we have not seen the kind of concentrated insider buying clusters that have marked durable bottoms in the past. In addition, insider buying is not an actionable buying signal. While they may be necessary conditions for a long-term bottom, insiders signals are often early.

Here is how I estimate a range where the S&P 500 may bottom. If we were to throw out the recessions that began in 2000 and 2008 as finance sparked recessions, the recessions of 1982 and 1990, which are more classic recessions experienced in the post-war period, saw forward EPS decline by about 10%. 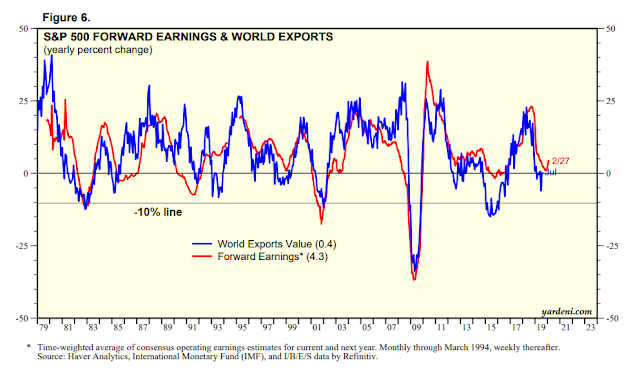 I would add that a -10% haircut on forward EPS is a conservative estimate. The consensus top-down earnings downgrade is in the high teens, and possibly as high as 20%.

If last week was the initial panic low, don’t expect the retest to be successful. Under a recession scenario, there is more valuation downside potential.

My inner trader got stopped out on Thursday’s panic sell-off and he therefore missed Friday’s recover. Traders should pay special attention to the high degree of market volatility and size their positions accordingly. The FOMC is meeting next week, and the Fed’s decision could be a source of volatility.

Even if last week’s low was not the final panic low, the odds does favor a bounce in the very near future. An analysis of stock/bond relative performance shows that stocks have dramatically underperformed bonds. As we approach quarter end, we should start to see equities to be bid as institutional re-balancing programs kick in. 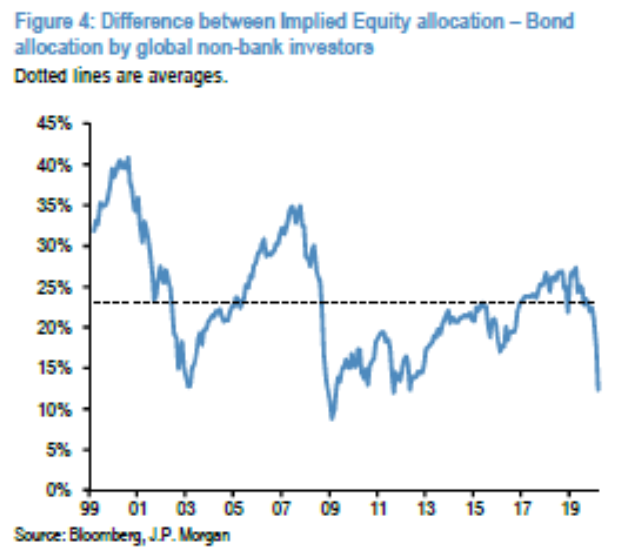 My inner trader is on the sidelines, but he is poised to return to trading by dipping his toe in on the long side. He just needs some price momentum confirmation that the bottom is in.